I’ve been reading a lot lately about the state of the Navy and the other seagoing forces. To be sure, there have been a lot of technological advances in the past twenty years since I hung up my sword (literally). Submarines have reached new levels of sophistication that make them more efficient than ever before. Without going into any detail, I would have to admit that what I know from my reading indicates that these boats can literally outperform any previous class in nearly every category. Frankly, I would give them six months of retirement pay for one month underway on one of the newest fast attacks. I promise I wouldn’t eat much and I could try and remember my many skills as a mess cook if I were allowed a few hours on the helm. I wonder if they are still even using helmsmen and planesmen?

The surface ships look pretty exotic too. I went to the commissioning of the USS Minnesota last year and tied up next to her was a San Antonio class LPD like the USS Somerset that had some of the oddest hull and superstructure dimensions imaginable. I’m told by friends that know these things that the design has unique purposes that will help her survive a number of threats during combat. I can imagine they would based on her looks.

The other surface fleet advances as well although I still have my doubts that the Littoral combat design will ever prove that it was worth the money spent to design, develop and deploy it. But again, I am really old school at this point. My number one hobby besides writing is being a self-certified nautical history tourist. That means that no battleship, submarine or surface ship that survived the breakers yards is safe from my camera. This year’s quest took us to Massachusetts to “capture” the battleship Massachusetts, USS Joseph Kennedy and of course the Lionfish (a restored Balao class submarine that is still in pretty good shape). 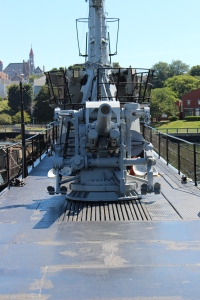 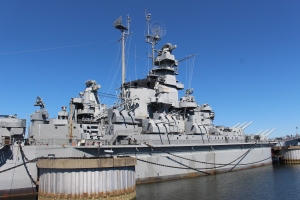 What worries me though is the endless drive to shrink the military at precisely the same time that threats continue to spiral upward. This translates into longer deployments with fewer ships under more extreme conditions. The reemergence of a soviet style dictator like Putin ensures that we may be in for another round of the Cold War. I know very few people that believe that he will be satisfied with scraps of paper when he can manipulate entire countries with his newly energized forces and treachery. Aircraft incursions along both coasts are becoming more and more routine and he is probing allies and non-allies as well across the entire region. How long will it be before some contrived crisis causes events to completely spin out of control?

The Chinese are also reading the tea leaves of the future at sea. As American continues to swim in debt, the Chinese are choosing to see how their long range naval plans can expand. Submarines, surface technology, long range missiles and electronic intelligence activities all continue to grow at an alarming rate. While we are closely tied economically, how long will that last if we have a collapse caused by our out of control generosity with our children’s monetary future?

And what about our Navy? Recent reports indicate that US Navy morale is at a very low place. From everything I have observed, I can’t say as I blame them. Political correctness has replaced military readiness. Commanders and leaders are routinely shit-canned for offences that would not have gotten previous generations a stern talking to. I have said it before but I am infinitely glad that cell phones and their internal cameras did not exist in my day. A vengeful shipmate could have altered the course of many a sailors career with one well taken candid shot. Don’t get me wrong, I do not support the worst of the worst offenders. I just think that our “leaders” are so terrified of their own careers being torpedoed that they have fallen into the PC honey trap of all time.

Longer deployments coupled with limits in funding for training resulted in tragic accidents in the Navy’s past. Misguided political policies add to those woes. I read recently in the Naval League’s Seapower magazine that one of the Admirals in charge of policy deployment said that climate change was the number one threat to the Navy and the country. Really? Climate change? I would have thought missiles and submarines and nuclear weapons were on top of that list. Maybe even the resurgence of the USSR and Red China as a threat.

Seeing the leadership failures and poor decisions being made makes me very worried for our country. I can understand why the average sailor who can’t speak his or her mind probably feels the same. I can only hope that it is not too late to reverse this course. Sailors have always done the impossible with varying support in the past. But I would at least like to give them a fighting chance. Wouldn’t you?

5 thoughts on “With all this new stuff, why is everybody so unhappy?”