The first day of the Elizabeth Centennial Celebration in 1934 started the same way as the previous days had … hot. The entire country had been sweltering in an unseasonable hot weather pattern and the people in Elizabeth were not exempt.

The four day program began on July 1 with an 8:00PM Union religious service at the High School Athletic Field. The program denotes that all events will be held using Daylight Savings Time. I thought it rather odd that the program would need to identify the use of daylight savings time until I did a little research. 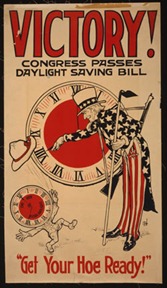 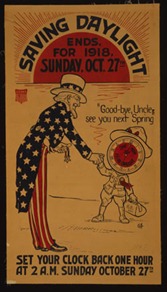 Daylight Savings Time on a national basis had been passed in 1918 during the First World War but was rejected by the American Congress due to its unpopularity (1919).

President Wilson’s veto was overridden and apparently it became a local option to use that method for adjusting time. Reinstatement did not occur until World War 2 so the importance of telling people which time standard you were using was a necessity. (Note: the uncertainty returned after 1946. States and local areas were once again able to make local decisions for years to come).

The temperature leading up to the 1st of July included a few spikes into the 100’s. Of course air conditioning back then was not as available as it is now. The heat wave extended all across the area for the entire week of celebrations. Knowing the formality of fashions in that day, can you even imagine being dressed in a full wool suit, hat and spats for men and long length dresses for the proper women of Elizabeth. Now add 93 degree sweltering heat (even at 8PM DST) and you can imagine how daunting it must have been.

Note: In case of unfavorable weather the services will be held in High School Auditorium.

Today’s entry is courtesy of:

See Alex Paxton for “Good things to eat” and George A. Lewis for all of your REAL ESTATE ~ INSURANCE ~ AND NOTARY PUBLIC NEEDS (Second floor Masonic Bldg.)

The heat wave of 1934 was the hottest on record up to that time. Continued dry weather and heat would contribute to the hottest North American heat wave ever which was recorded in 1936 and coincided with the Great Dust Bowl.

I can’t find a record of how many people actually attended services. In my heart, I want to believe it is anyone who was physically able to come. The times almost demanded extraordinary behaviors and I am sure the good people of Elizabeth Borough heeded the calls from their various Ministers and Priests.

As we close out today’s program, here are some interesting facts about what it costs in 1934:

Tomorrow will be day two of the Elizabeth Home-coming Centennial Celebration. Don’t forget, quoit matches and mush ball elimination begin promptly at 9:00 A.M. at the Rockwell Garage and the Safe Factory ground respectively.

I had no idea what a quoit was but apparently these folks are quite familiar with them: http://www.usqa.org/

Steamboat inspection at the docks is also available from 9:00 A.M. but all visitors must be clear before the 1:00 P.M. Parade.

See you at the river!

A more complete history of the event is contained here: