The boroughs and townships of Western Pennsylvania are a patchwork of communities that have evolved over the past several hundred years. Elizabeth Borough is one such community and has a story typical of many of the river communities of old. In 1934, The Great Depression was working its way around the country and the globe. But 1934 was also the 100 year anniversary of the founding of Elizabeth so the city leaders bravely decided to honor the occasion.

I have a copy of the Elizabeth Homecoming Centennial Celebration Souvenir Program 1834 – 1934 which was held on July 1-2-3-4. The Souvenir Program costs 10 cents which probably was a pricey amount for that day and age. It was handsomely made and printed by Palmer Ashton.

Nothing was left to chance according to the bulletin and the entire community (plus some surrounding towns) were involved in one way or another. Music and sports, Sabbath services and a pageant, a river and a street parade, historic readings and historic objects on display were all taken into account. This would be four days of celebration for the tiny community. The last veteran of the Civil War able to get around was going to be feted during the Fourth of July celebration

From the Program; In Memoriam

“The pioneers in any line of worthwhile endeavor make the succeeding generations their debtors. We are prone to overlook or even forget the toils, the perils and the hardships of those who were here in the beginnings of our history as a community and the early years of its existence. These well laid the foundations for our town today. Devoid of many of the conveniences of our modern living, they often toiled under great handicaps, but they carried on well. The foregoing pages could mention only the few whose positions of leadership brought them into the prominence which preserved their names through the passing years. But the great unnamed hosts are worthy of our remembrance also, and these lines are placed here as a deserved testimonial to all those whether in a position of leadership or the humble walks of life, who so well laid the foundations of this community of our homes and hope.” 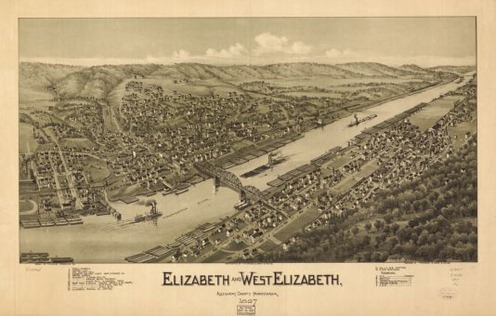 Elizabeth was named after the wife of one of the town’s early settlers. The community on the banks of the Monongahela is the story about the growing of America even from its earliest days. From its days as a part of the western wilderness to the booming days of riverboat traffic, Elizabeth played a key role in the history of this pioneering country.

Richard T. Wiley wrote the forward called “The Story of Elizabeth and its Centennial Celebrations” From that story:

“Long before the eyes of the white people looked on the location of Elizabeth Pennsylvania, and its beautiful environs, the place was inhabited by hosts of those of other races who have left many evidences of their occupancy. In an apparent early age of human development those people of mystery, the Mound Builders, took their living largely from the great swollen streams of the passing Ice Age, besides which their rude habitations were reared, and they buried their dead on the high places. These were followed, apparently long afterwards, by the red Indians, who were in possession when white people first came into the regions.”

As a kid, we spent many hours scouring the woods in our area for arrowheads or anything else that may have been left behind. There is a lot of shale in that part of the country and it was easy to convince yourself that the small piece of oddly formed shale was indeed a leftover from some great Indian attack on the settlers. The area was hotly disputed during the French and Indian wars and it is easy to convince yourself of the legitimacy of your fins, even if there was no known proof that Indians actually came any where close to the road we grew up on.

Interestingly enough, the tradition of burying the dead in high places still exists all over the Borough and the Townships. Maybe the memory of rivers overflowing their banks still haunted the people of the area, but many of our major cemeteries occupy the highest grounds around.

“The whole country for many miles around was densely covered by noble forests which teemed with game of many sorts, while the streams abounded with fish. These living things, in large part, provided sustenance for the simple wants of the people, while the forests and its denizens gave them clothing, habitations and the graceful canoes which went streaming over the placid Monongahela, in prophecy of the mighty navigation which would mark the continued occupation of the white race.”

By the late twentieth century, industrialization and the baby boom ensured that most of the streams and even the rivers were tamed and barely useable for the fishing and hunting that was once so important. Mining and steel mills of every kind blotted out the sanguine properties of all the waterways and the need for more housing tracts ensured that the open land required for large herds of animals was long gone. The rivers were tamed with locks and dams which lessened the devastation of the flooding but even in more recent times, the waters still outsmarted the ability of humans to contain them.

“Occasional traders or emissaries from eastern centers of white population, coming on errands to these tribes, had seen the country and its people, but it was not until about the middle of the eighteenth century that movements began to be made looking to white colonization and occupancy of Southwestern Pennsylvania. These witnessed the stirring times for the section when the French and the British contended for tis control. The youthful George Washington here began his military career, getting the training which did much to fit him for his leadership in the founding of the great nations later. The Braddock disaster in 1755 gave the French undisputed control for three years, and other years of stubborn fighting between colonists and Indians followed.”

In school, we were taught all about the battles of the French and Indian wars and of course the story of the British Redcoats marching through the woods near my home was a fanciful but incredibly stupid tactic. The Indians had never learned to fear and the French used that tactic of surprise to great affect. I can barely imagine marching to a drum beat through the unimproved brush of the woods in bright red uniforms while the Indians surrounded you in clothing that was designed to match the environment.  The lessons were not well learned as was discovered in the war for Independence that would follow.

“William Penn’s grant by the British Crown was to include the valley of the Monongahela, though it had not yet been surveyed. But his policy of respecting the rights of those found in possession of the land continued with his sons and their successors in the colonial government. The Iroquois or Six Nations, claimed the region of Western Pennsylvania and proclamations of the Penn government forbade white settlement on their lands. But it was impossible to enforce this command in the western wilderness, and when the region was bought by the Penn government from its Indian claimants in 1768, many choice spots within it had already been occupied by squatter settlement.”

It occurred to me that this action by the squatters was an early form of Occupy Wall Street since the settlers were probably homeless men and women who had been driven out of the settlements that hugged the coast. But in a larger sense, the very granting of land to William Penn by the Crown was  a form of illegitimate enterprise since the Crown never actually held deed nor trust to the land. I am fairly sure that the Iroquois tribes would like to be able to challenge that in a modern day court.

“The tongue of land between the lower stretches of the Monongahela and Youghiogheny Rivers was early recognized as one of the choicest sections in the whole region, and was soon being appropriated rapidly when the movement of colonization got underway. This was known through many years of white occupancy as the “Forks of Yough”, and the community of today’s celebration was it metropolis and principal place of assemblage. Announcement was made by the Penn government that an office for the sale of the ground in the new purchase would be opened in Philadelphia on April 3 1769, and when the doors opened the scene was much like that of a modern advertise bargain day at one of the great stores.”

Looking at it from Wiley’s point of view in 1934 when this was written, its interesting to try and imagine what a great store would have looked like. There are advertisements in the Bulletin which run the whole spectrum of small and large merchandisers. Rockwell Motor Company (Ford Dealer with Atlantic Gas and Oils, Geo, Jaskol for Discriminating Dressers, Allen I Schwartz – Elizabeth’s greatest Store, Wearing Apparel for Men, Women and Children, and my perennial favorite, GC Murphy Company 5 and 10 cents stores for Quality merchandise at the Lowest Prices with selected merchandise up to $1.00. (Funny, I never noticed before tonight that there is no key for Cents).

Elizabeth contributed many of her sons to the Revolutionary War and an every conflict since. She also played host it many famous people including the Marquis de Lafayette and his son Colonel George Washington Lafayette as the toured the country in May of 1825. But it was at the height of the age of steamboat building when Elizabeth came of age and was incorporated as a borough.

Credit: Courtesy of The Coal and Coke Heritage Center, Penn State Fayette, http://www.coalandcokepsu.org/
Although the plight of city residents attracted the most public attention in Pennsylvania during the Great Depression, some of the worst poverty in the state was in the rural mining districts in northeastern and southwest Pennsylvania. Not far from Pittsburgh some unemployed miners and their families squatted in abandoned coke ovens. This photograph was taken by Louis S. Michael, an amateur photographer who documented his family, friends, and everyday life around Pittsburgh.

The Elizabeth celebration of 1934 was an amazing testament to the conviction of the sons and daughters of the pioneers that settled on the banks of the Monongahela.

Holding a four day celebration in the midst of a difficult depression was a bold statement about the faith of the community in the future based on its past.

My favorite part of the Bulletin is near the last page. The West Penn Electric Shops took out a full page advertisement heralding the advantages of a new type of technology gaining favor: 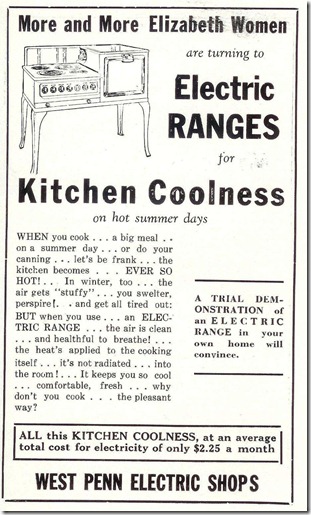 178 Years ago, the little town on the Monongahela River had its beginning. Like many other small towns, it has seen its share of ups and downs.

I can’t wait to see what the future holds.

One thought on “Elizabeth Pennsylvania … 178 Years of Freedom and Liberty”