The two big events for this steamy hot July day were the Steamboat Parade and the Great Historical Pageant.  Despite the grave economic situation of the country, the organizers were able to put together a massive display of riverboats that were gaily decorated and covered with happy citizens in their summer finest.

This Article about the 1934 Parade appeared in the September 1985 issue of S & D Reflector.

Fifteen of the stern wheel towboats that were active in the Pittsburgh pools and beyond, paraded on the movie screen before the 45 who attended the meeting of the OK Chapter of S&D on Sunday, June 2nd, in the Mason County Library at
Point Pleasant, WV. All of the boats were seen as they moved in the procession celebrating the 100th anniversary of the town of Elizabeth, PA on the Monongahela River on July 2, 1934. It
took place in an era when there was constant towboat activity in the Pittsburgh pools as tows of coal, steel, sand and gravel and other products were always under way so the boats seen in the parade were familiar to many of those in the audience who had boated on the Upper Ohio.

Leading the parade was Capt. John Hysmith’s steamer R. J. HESLOP, which had been equipped with a calliope for the occasion, and it was followed by such well known steamers as the I. LAMONT HUGHES, A. 0. ACKARD, CRUISER, J. H. HILLMAN, A. B. SHEETS, WM. LARIMER JONES, E. K. DAVISON, WILLIAM B. RODGERS, LaBELLE, COLLIER, CRUCIBLE, LEONA, BEACON and PENNOVA. The lone diesel-powered boat in the parade was the sternwheeler MARY ALICE. 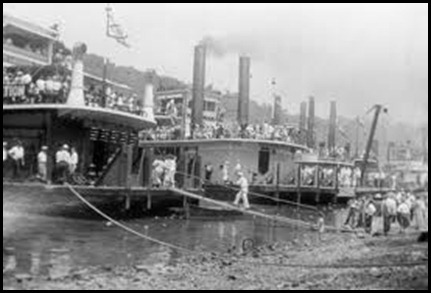 Many of the steamers were loaded with passengers, well dressed in the style of the day (white shoes, white ducks and straw boaters), and all obviously enjoying the festivities. Many of those most prominent in Pittsburgh river affairs at that time were on hand; Capt. J. L. Howder was chairman of the river parade committee and Capt. Bob Eberhart was commander of the fleet.” 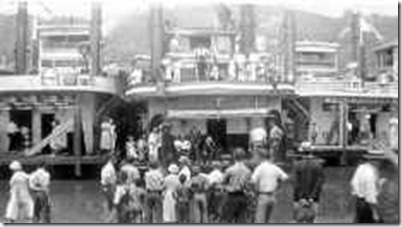 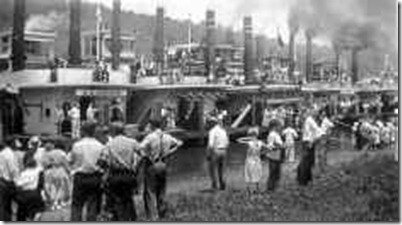 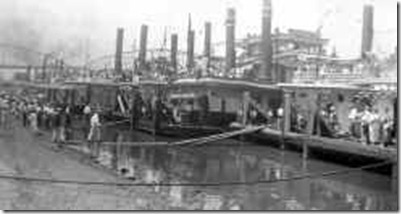 the rest of the story can be read at http://freepages.history.rootsweb.ancestry.com/~jmohney/1934_centennial.htm

The Great Historical Pageant was held at the High School Athletic Field at 9:00 P. M.

The pageant was held all three evenings (2,3,4) and was arranged, staged and rehearsed by the John B. Rodgers Producing Company of Fostoria Ohio (Directors of Plays and Pageants).  The Pageant Master was Lucille M. Roice and Richard T. Wiley was the local Historian.

The pageant was designed as a great spectacle with eleven Episodes ranging from ancient earth up until present day (1934). With a cast of over 300 townsfolk and neighboring townspeople, the Producing company probably had its hands full making sure everything went off as scheduled. From the program:

“…depicts universal, neighborhood and local history from the earliest times to more recent years in a succession of spoken drama, pantomime, tableaux, drill, dances, and other individual, group, and mass movement. It will be presented with appropriate scenery and properties, in garb of the races and periods represented, with brilliant lighting and distinct sound effects. Seating for 2000 has been provided and the Pageant is given complete at each performance.”

A fireworks display was scheduled for 11:00 P.M. so that meant the entire eleven episodes were to be completed in two hours.

Episode One: The Dawn of Creation

after a prophecy by Father Time:

“In the distance, ghostlike forms are seen approaching, followed by many beautiful things. They lift their veils and behold, we see the Dawning of Creation – the birth of Sky, Land and Flowers, shaped and molded into beautiful harmony and movement.”

“Just as everything is in harmony, with Creation growing in its merry play, the voice of Man is heard.

When the land was first explored, it was inhabited by the Red Man. Where they came from in the beginning, how long they have dwelt in North America, what people they replaced, are matters of much dispute. All of the Western Pennsylvania section was claimed by the Iroquois Confederacy of Indians. From these the Pennsylvania colonial government bought this section in 1768. We see a band of Indians as they set up their camps, bargain with a white man, smoke a pipe of peace and celebrate with a great savage dance.”

.As the White man came further and further into the territory, Indian pushback was common in the forms of raids. The Crown’s Purchase of 1768 (Fort Stanwix Treaty) was considered a Devil’s Deal in the way native populations were swindled out of their rights by the British government. Wars with the pioneers continued long after the treaty and only came to an end with a swelling population of Europeans with better weapons and machines.

Episodes Three and Four: The arrival of the early settlers and the Conquering of the Wilderness

As the early settlers arrive, they find an inhospitable land. Western Pennsylvania is a hilly country that lies just below the glacial lines of ancient time. Large boulders and uneven lands make for a hard go at farming. Undisturbed forests would slow inland travel until more dedicated roads could be cleared. The natural pathway was the rivers. In that early age, even the rivers could provide challenges during winter (ice) spring and summer (flooding and underwater floating debris) and fall when the occasional drought would create sand bars and other navigational problems.

But the people continued to come, building up a population base that would eventually master all of these obstacles.

In the next few days, the pageant schedule will continue with the recognition of the town’s namesake, the early school years and of course, the Whiskey Rebellion.

Today’s activities were sponsored by:

Elizabeth’s amusement center for 26 years, which invites you to make them your headquarters during the Centennial Celebration.