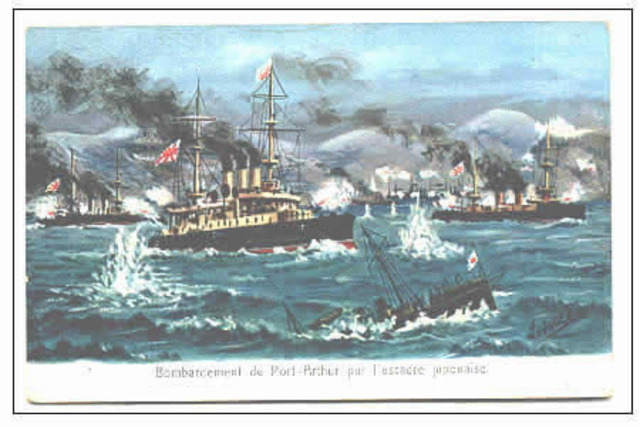 What if a submarine was present on that day?

On the night of 8 February 1904, the Japanese fleet under Admiral Tōgō Heihachirō opened the war with a surprise torpedo boat destroyer attack on the Russian ships at Port Arthur. The attack heavily damaged the Tsesarevich and Retvizan, the heaviest battleships in Russia’s Far Eastern theatre, and the 6,600 ton cruiser Pallada.

These attacks developed into the Battle of Port Arthur the next morning. A series of indecisive naval engagements followed, in which Admiral Tōgō was unable to attack the Russian fleet successfully as it was protected by the shore batteries of the harbor, and the Russians were reluctant to leave the harbor for the open seas, especially after the death of Admiral Stepan Osipovich Makarov from a naval mine on 13 April 1904. Although the actual Battle of Port Arthur was indecisive, the initial attacks had a devastating psychological effect on Russia, which had been confident about the prospect of war. The Japanese had seized the initiative while the Russians waited in port.

Later in the year, the Japanese bomb Vladivostok and destroy the entire Russian fleet.

The race for a submarine weapon

One of the oldest jokes about submarines I can remember is telling someone that you were going to take your girl out for a drive and go watch the submarine races. In 1903, it wasn’t much of a joke to actually want to develop a war capable submarine. Russia had already begin building its own version of a submarine before they decided to purchase the Holland type boats. Like other navies around the globe, Japan also purchased Holland type boats in the hopes of exploiting the new technologies. Although no submarines were used in combat, the arms race was becoming a global influence.

This article from the Topeka Kansas State Journal talks about the advances made in submarine technology in the four years since the first boat was purchased.

Development of the Submarine In Naval Warfare

AT the present time there is much activity among naval experts over the matter of submarine navigation. This is due in part, but not wholly, to the almost frantic efforts both of the Japanese and their opponents to secure any submarine craft which is likely to prove effective. For upward of a quarter of a century the Interest in this branch of naval equipment has been subject to periodical stimulation. Until recently, however, the interest aroused by the heralding of some coming submarine wonder has not survived a test; failure in some essential has relegated the project to the realm of the improbable. The performance of the submarine torpedo boat Fulton, constructed by the Holland Company and exploited off Newport for the benefit of the navy board of inspection and survey, goes far to public faith in this species of war agent. The recent tests, which were made by a board composed of six of the leading submarine experts of the navy, were for the purpose of establishing the fact as to whether or not any existing type of submarine boat showed sufficient merit to warrant the department in expending the $850,000 appropriated by congress for that purpose. It was expected that Captain Simon E. Lake’s Protector would enter the competition, but a few weeks ago the Lake boat was taken away from Newport, and it is now thought that the Japanese government has purchased her.

There is no doubt that the Fulton is the most perfect specimen of the Holland type of submarine craft in existence. The most untiring pains were taken during its construction to avoid structural complications, and for a year after completion the stanch little vessel was subjected to a variety of tests designed to prove her trustworthiness. According to the examining board, the Fulton possesses all of the merits of her predecessors, the Adder, the Shark, the Porpoise and others of the Holland type which the government already owns. The board is also of the opinion that she is superior to those boats in several important particulars.

The difficulties in the way of submarine navigation have been so numerous that it was felt by naval engineers that much had been accomplished when within recent years they had been reduced to five: difficulty of securing safety, of obtaining fair speed, of steering, of insuring stability and of directing and discharging the torpedo. The Fulton has eliminated the problem of safety. As to speed, it has been found that an excess of ten knots when submerged is not to be accomplished as yet. The motor most available for under water service has probably been the subject of more conjecture and experiment than any other point connected with this species of navigation. Storage batteries as at present constructed are too heavy, steam Is out of the question for obvious reasons, and the other usual means of propulsion are equally inefficient in subsurface navigation. The most feasible motor has been found in a gas engine which develops high pressure by means of explosions. Until recently it was impossible to keep the exhaust gases from escaping into the boat. There was also the danger of detection from the escaping bubbles and the smell of gas. As to steering, there remain obstacles yet to be overcome. When under water it is not possible to see more than 100 feet in advance even when at rest; when the boat is in motion the difficulty is greatly increased. The Fulton is provided with a sensitive compass which will give warning of the approach of a hull of copper, bronze, aluminum or some other non-magnetizable metal. The most important device, however, is the periscope. It is in reality a sort of circular camera. When those below wish to find out what is going on above the water they thrust it upward through a circular opening in the top of the boat. There is formed on the reflecting table a picture of the surface, with any object that may be upon it in plain view. The periscope is so slender and so long that the motion of the boat interferes with its steadiness. It may prove also to be a means of detection, and a well-directed shot from a warship would be likely to render it ineffective. All submarine boats are fitted with small conning towers projecting a short distance above the hull and having glass covered peepholes. These towers can be used when cruising near the surface, and the top may be opened if the weather is fine. In most boats the opening in the conning tower forms the principal way of ingress and egress. To secure a reasonable habitability in a submarine boat was a problem that baffled constructors for a long time. The recent test of that feature on the Fulton demonstrated the fact that the little cabin of that craft is quite as safe as quarters on a battleship. Until now there has been little effort made- – either to warm or cool these boats. Hitherto it has been possible to remain in a submarine craft only a short time without experiencing discomfort from the change of temperature. Besides this, there has been no adequate provision for eating and sleeping, and the light has not been good enough to admit of accurate observation. All this has been overcome. The Fulton went down in one of the slips at the torpedo station at a few minutes before 11 o’clock one evening and reappeared next morning at a few minutes past 11, the test having covered a little over twelve hours. The nine men who spent the night at the bottom of the slip not only ate, drank, talked, read and played cards, but cooked, lighted their apartment brilliantly with electricity and might have warmed it with the same agent. The subaqueous revelers declared that they could have remained submerged for ten days.

Perhaps the greatest difficulty of ail is to be encountered in the discharge of the torpedo. In addition to the confined space in which torpedoes are operated and the difficulty of giving them the correct direction at the time of firing, it is necessary that the boat should be nearly horizontal at the moment, else the torpedo will take too deep a dive or rise to the surface at the beginning of its run. The shock of firing also causes great longitudinal disturbance in the boat. The tests made with the Fulton show that much of the trouble formerly experienced from this cause has been overcome.

It is, of course, unfortunate that Lake’s latest improvements in submarine navigation were not made public by the recent tests. The design of the department was to show the utmost fairness in the matter of a choice, and for that reason the competition was arranged. Since the eastern complication came to a focus, and for a long time before that period, both Lake and the Holland Company have had abundant opportunities to put their inventions into active service. It would be an interesting coincidence if the two little destructive agents should now see active service on opposing sides.

When or by whom the first submarine boat was built will probably never be known. Alexander the Great was interested in subaqueous navigation, and it was suggested iii the thirteenth century. In 1372 some English ships were destroyed by a machine carrying fire under water. In the early part of the seventeenth century submarine boats were numerous, and by 1727 no less than fourteen types of submarines had been patented in England alone. In 1775 David Bushnell built his first boat, with which Sergeant Lee attacked the British ship Eagle in New York harbor. Lee actually got under the ship, and his attack failed only because the screw with which the torpedo was to be attached to the bottom of the Eagle was not sharp-enough

The submarine story in the journal was on the bottom half of the page.

On top was a period piece on working in the fireroom of a “modern day battleship”. The article spoke about the need for efficiency in the main type of fuel that was in use at the time: coal. It would only be a few short years before this modern battleship and most of its technology would also fade into history with the changeover to the more efficient new fuel called oil.

Along with the improvement in energy technology, December of 1903 also saw the first powered flight in the United States. Cars and motorcycles would appear with new methods of manufacturing and increased power. The invention of a vacuum tube would revolutionize electronics and communications.

The American Century was beginning with a large race for submarine technology and for now, it seemed like the Americans were winning. The Germans were about to teach them and the world a few things about submarines. 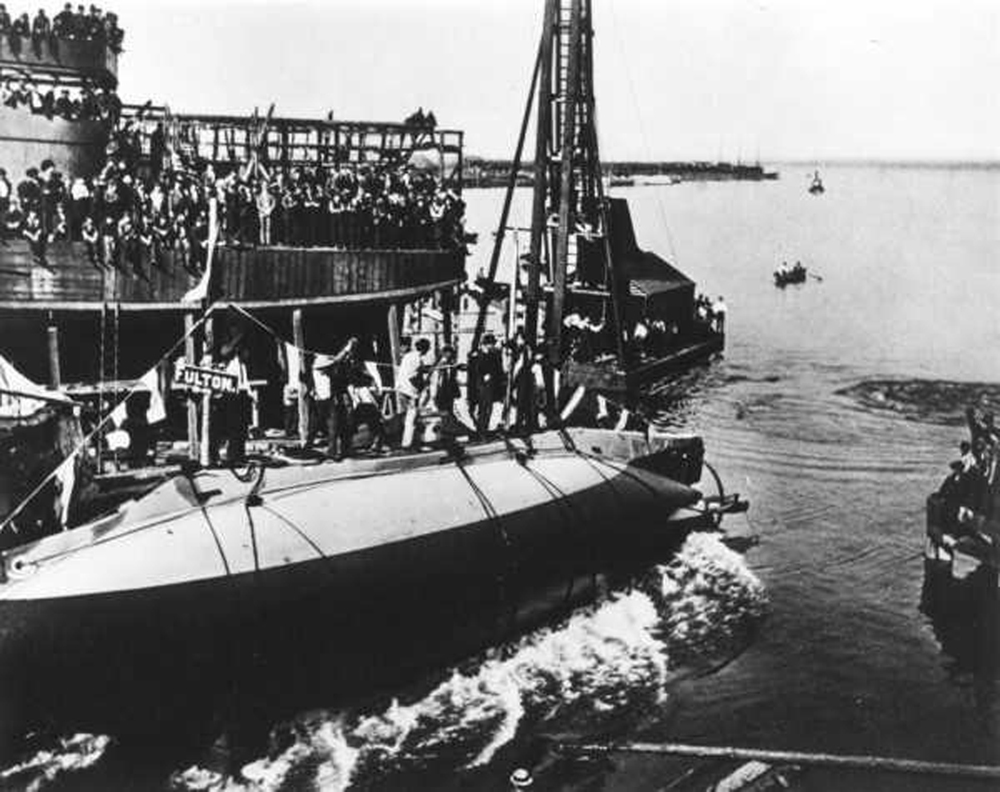