Veteran’s suicide is not a new phenomenon.

It has been reported that upwards of twenty-two men and women veterans commit suicide every day. That number is not pure since there are a number of filters and interpretations that are often included in statistics.

But even one suicide leaves an impact on the family and those left behind. Regardless of the actual number, it is a proven fact that veterans suffer a larger proportion of suicides than non-veterans. The whole report is here:

While I was researching for today’s World War 2 perspective,

this story showed up in the March 28 edition of the Washington Times:

By the Associated Press. DENVER. March 28.

A summary court, he added, would hold an inquest. Admiral Blakely, a veteran of the Spanish-American and First World Wars, was admitted to the hospital in October 1940, for treatment for tuberculosis

Two letters were found in his room by investigating officers, Col. Quade said.

One, addressed to a ward officer, gave instructions for disposal of his personal effects and the other was addressed to John R Y. Blakely, Jr.

Col. Quade said Admiral Blakely’s hospital registration card listed a brother. Walter C Blakely, Wynnewood, Pa., as next of kin. Admiral Blakely was born in Philadelphia July 17. 1872, and was appointed to the Naval Academy from that State in 1888, graduating in 1892.

He was given the Navy Cross for World War convoy and transport duties with the U. S. S. Des Moines and the U. S. S. Seattle. Following the war, he attended the Naval War College in 1920 and 1921 and served in the Bureau of Ordnance, Navy Department, from July, 1921, to 1922, when he was given command of the battleship U. S. S. Arizona (which ship was sunk at Pearl Harbor December 7).

He returned to Washington in 1925 to be assistant chief of the Bureau of Navigation, holding that post until 1927, when he was transferred to the command of Light Cruiser Division 3, Scouting Fleet, which was sent to the Asiatic in February, 1927. Following his duty in Eastern waters, he was appointed commandant of the 15th Naval District, Canal Zone He reported as a member of the General Board In August. 1930. Held Several Medals.

In addition to the Navy Cross, he held the Spanish Campaign Medal. West India Campaign Badge, Mexican Service Medal, Yangtze Service Medal, Victory Medal and the Ecuadorian Military Order, First Class. He was a member of the Army and Navy Club of Washington, the Chevy Chase Club, the Metropolitan Club and the Military Order of the Cariboa. He retired in 1932, due to incapacity suffered in line of duty.

As far as I can tell from searching Blakely’s history, he was not married and he had no children.

Searching through the archives, he was present at many social functions in Washington DC during his last tour. In every case, he is listed as attending on his own. Social registers of the day listed which officers participated in the functions with their wives. Whether or not he ever married will remain a mystery.

Rear Admiral Blakely retired after 40 years of active service in 1932 and died on 28 March 1942 in Denver, Colorado. He was interred at Arlington National Cemetery on 1 April 1942. 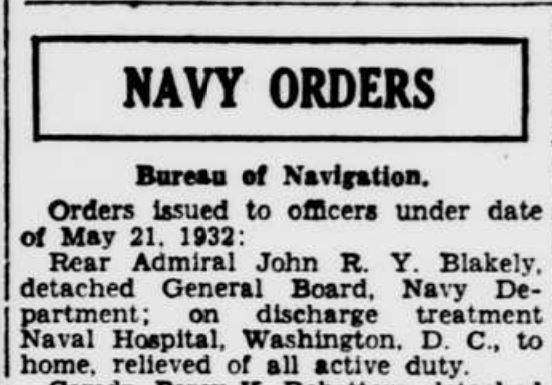 Most sources just say that he died on March 28, 1942, without mentioning that he jumped from a window to his death. It would be interesting to someday find out more about his story. But that will have to wait for another day.

If you’re a Veteran in a mental health crisis and you’re thinking about hurting yourself—or you know a Veteran who’s considering this—get help right away. You’re not alone.