With Pearl Harbor fresh in the minds of the American public, any good news was welcomed by the American people. In January 1942, the news was not encouraging. The Japanese war machine was continuing its relentless march down the Malay Peninsula, Manila had fallen, and Bataan was being threatened, and newspaper reports of catastrophe after catastrophe must have been depressing. Despite putting a positive face on the bravery of the American sailors at Pearl Harbor, it was difficult to hide the fact that much of the Navy was laying on the bottom of Pearl Harbor and would not be able to respond to another major attack.

But submarines were another matter.

In his 1941 appropriations request, Roosevelt had included the building of a larger number of subs than ever before. These ships had better capabilities than their predecessors and the American public saw the example of the German U boat menace on commerce. Despite pre-war prohibitions, unrestricted submarine warfare brought a glimmer of hope. Japan was an island nation with far flung new possessions. Their ability to supply both would be seriously hampered if America could capitalize on this new type of warfare.

Boats like the USS Herring would be among those that eventually brought pressure on the Japanese.

But we can never forget the men who sailed on them and their incredible sacrifice. While many sacrifices were made in all of the branches that served, submarines incurred a significantly higher cost than any other branch when taken into context. We would ultimately lose 52 submarines in the war. During World War II, the U.S. Navy’s submarine service suffered the highest casualty percentage of all the American armed forces, losing one in five submariners. Some 16,000 submariners served during the war, of whom 375 officers and 3,131 enlisted men were killed.

This is the story of one of those boats.

The Gato class of submarines was built for the United States Navy and launched in 1941–1943; they were the first mass-production U.S. submarine class of World War II. Together with their near-sisters the Balao and Tench classes, their design formed the majority of the United States Navy’s World War II submarine fleet. Named after the lead ship of the class, USS Gato, the Gatos and their successors formed the core of the submarine service that was largely responsible for the destruction of the Japanese merchant marine and a large portion of the Imperial Japanese Navy in World War II. Gato’s name comes from a species of small catshark.

Like most other U.S. Navy submarines of the period, boats of the Gato class were given the names of marine creatures. In some references, the Gatos are combined with their successors, especially the Balao class.

The Gato boats were authorized in appropriations for Fiscal Year 1941, as part of President Franklin Roosevelt’s proclamation of “limited emergency” in September 1939. The first boat laid down was actually USS Drum at Portsmouth Naval Shipyard on 11 September 1940. She was commissioned on 1 November 1941 and was the only Gato-class boat in commission when the war started. Gato herself was laid down on 5 October 1940 by the Electric Boat Company at Groton, Connecticut, and commissioned 31 December 1941. Due to their large construction capacity, more than half (41) of the class was built at Electric Boat facilities; three new slipways were added to the north yard and four slipways were added to the south yard to accommodate their production. In addition, the government purchased an old foundry downstream from the main yard, constructed 10 slipways, and turned the yard over to Electric Boat. Called the Victory Yard, it became an integral part of Electric Boat operations. A total of 77 Gatos were built at four different locations (Electric Boat, Manitowoc, Portsmouth, and Mare Island).

All of the Gatos (with one exception, Dorado) would eventually fight in the Pacific Theater of Operations. However, in the summer of 1942, six new Gatos were assigned to Submarine Squadron 50 and sent to Rosneath, Scotland, to patrol the Bay of Biscay and to assist in the Operation Torch landings in North Africa. All in all, they conducted 27 war patrols, but could not claim any verified sinkings. Considered a waste of valuable resources, in mid-1943, all six boats were recalled and transferred to the Pacific.

USS Herring (SS-233), a Gato-class submarine, was the only ship of the United States Navy to be named for the herring, a type of small oily fish found in the temperate, shallow waters of the North Atlantic.

Her keel was laid down 14 July 1941 by the Portsmouth Naval Shipyard in Kittery, Maine. She was launched on 15 January 1942 (sponsored by Mrs. Ray Spear, wife of Rear Admiral Ray Spear, Chief of the Bureau of Supplies and Accounts), and commissioned on 4 May 1942 with Lieutenant Commander Raymond W. Johnson (Class of 1930) in command.

HERRING, under LCDR David Zabriskie, Jr., left Pearl Harbor on 16 May 1944 to conduct her eighth patrol in the Kurile Islands. On 21 May she topped off with fuel at Midway and departed for the Kurile region. No word was received from HERR ING direct after her departure from Midway, but she did accomplish a rendezvous with BARB on 31 May 1944.

These two boats were to patrol the Kurile Islands area cooperatively, and at the rendezvous, as recorded in BARB’s report of her eighth war patrol, the areas for which each was to be responsible were delineated. A few hours after leaving HERRING early on the afternoon of 31 May, BARB made contact with two Japanese merchantmen. While developing the contacts BARB heard distant depth charging, which she took as an indication that HERRING was making an attack.

Later that evening BARB picked up a prisoner who revealed that HERRING had sunk the escort vessel of the convoy BARB had been attacking. The ship sunk was ISHIGAKI, a new type DE built in 1942, and it was sunk with one torpedo hit. The sinking resulted in the scattering of the three ship convoy and two ships, which subsequently passed near BARB, were sunk by her. Post-war information reveals that HERRING sank the third merchantman of the convoy.

On 3 June 1944 orders were sent to BARB and HERRING directing them to stay outside of a restricted area in which friendly surface ships would be operating during the Marianas Campaign. A receipt was required for this message, but none was heard from HERRING. BARB was unable to contact her after 31 May. Consequently, on 27 June, Midway was directed to post a sharp lookout for HERRING, which might be returning without ability to transmit by radio and was expected by 3 or 4 July. When she had not appeared by 13 July 1944, HERRING was reported as presumed lost.

Japanese information indicates that HERRING was sunk on 1 June 1944, two kilometers south of Point Tagan on Matsuwa Island in the Kuriles. The report states that two merchant ships, HIBURI MARU and IWAKI MARU, were sunk by American torpedoes while at anchor at Matsuwa. In a counterattack, a shore battery scored two direct hits on the conning tower, and “bubbles covered an area about 5 meters wide, and heavy oil covered an area of approximately 15 miles”. The position of this attack was around 150 miles from the position where HERRING met BARB; the attack occurred on the day after the BARB picked up her prisoner. BARB and HERRING were the only U. S. submarines in the area at the time and BARB did not make the attack on the anchored ships referred to above. As a result of the attacks reported by BARB and by the Japanese, HERRING has been credited with four ships and 13,202 tons sunk for her last patrol.

On 21 May 1944, USS HERRING (SS-233) began her eighth war patrol, setting out from Midway en route to the Kurile Islands, an archipelago that stretches over 800 miles from Hokkaido, Japan, to Kamchatka, Russia. On the morning of the final day of the month she met up with USS BARB (SS-220). “Held megaphone conference,” the commanding officer of BARB wrote in his patrol report. “Decided Barb would cover area south and west of lane, Herring to north and east to Matsuwa.” At 1120: “Secured conference and headed south for roving patrol along lane.” HERRING would never be seen or heard from again.

Spirits aboard the boat must have been high as she turned away from BARB: Japanese records reveal that HERRING had sunk two enemy vessels the night before, one of which, Ishigaki, had been responsible for the loss of USS S-44 (SS-155) back in October of 1943. Unfortunately, the records also reveal how HERRING died. The day after she rendezvoused with BARB, the boat arrived at Matsuwa Island to find two more ships at anchor. She promptly sank them but was spotted in the process. Herring was spotted by Japanese shore batteries on Matsuwa (Matua) from the Matsuwa Detachment of the Japanese Army Guards Division 52. The shore batteries scored two direct hits on the conning tower causing “bubbles covered an area about 5 meters wide, and heavy oil covered an area of approximately 15 miles.” The entire crew was lost in the sinking at Lat 48°00’N Long 153°00’E. 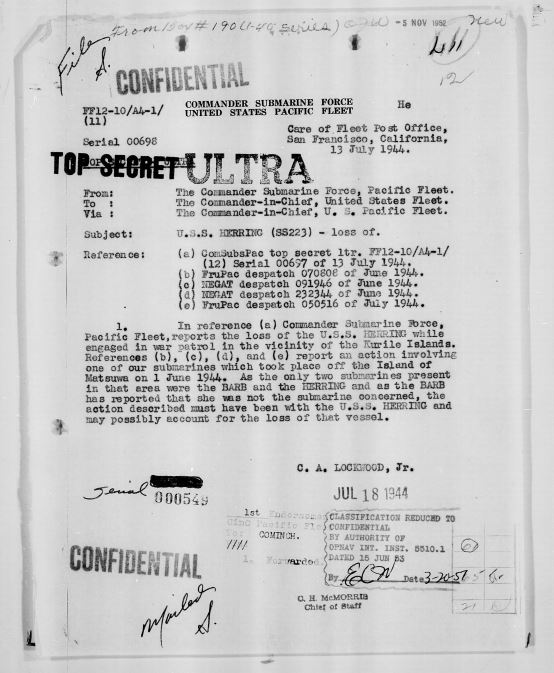 Eighty-three men perished aboard HERRING on what was simultaneously her most and least successful war patrol. The boat was awarded five battle stars for her wartime service.

“To those whose contribution meant the loss of sons, brothers or husbands in this war, I pay my most humble respect and extend by deepest sympathy. As to the 374 officers and 3131 men of the Submarine Force who gave their lives in the winning of this war, I can assure you that they went down fighting and that their brothers who survived them took a grim toll of our savage enemy to avenge their deaths.”

MAY GOD REST THEIR GALLANT SOULS. 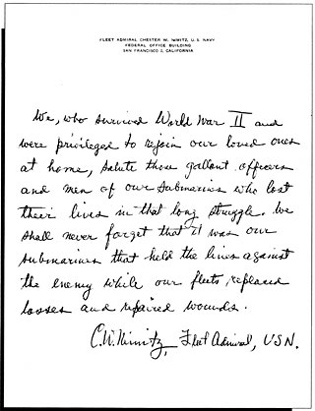 “We, who survived World War II and were privileged to rejoin our loved ones at home, salute those gallant officers and men of our submarines who lost their lives in that long struggle. We shall never forget that it was our submarines that held the lines against the enemy while our fleets replaced losses and repaired wounds.”