When I was a young boy going through grade school, I was fascinated with the heroes of the day. There were very few superheroes (Superman and Batman) and I didn’t follow sports as closely as others did. Nope. My heroes were the men who were American Inventors. We learned all about Eli Whitney, Alexander Graham Bell, Fulton and of course one of the most famous of all Thomas A. Edison. I am grateful that I lived in an age when we were taught to look up to the kind of people who actually made a difference in the world.

His personal story of overcoming incredible disadvantages was a real inspiration. It’s not just that he had to deal with family tragedies, it was the added burden of being deprived of part of his hearing. The single biggest lesson was to never quit. Some people say that his greatest invention was his ability to invent. I think he would have made a really good submariner.

This was shared to a Navy web site without attribution but really tells his story well:

Thomas Alva Edison – born on 11 February 1847 in Milan, Ohio – grew up in Michigan. As a child, he was slow in school and very poor in mathematics, but excelled as a reader. Hard work became a characteristic feature of Edison’s life at an early age; as a teenager, he had already established a thriving business selling newspapers and candy on trains. In 1863, he became a telegraph operator and, in 1868, went to work for Western Union in Boston, Mass.

Throughout that period, however, he also dabbled with chemistry and the application of electricity to telegraphy. He secured a patent to his first invention, an electrographic vote recorder, in 1869. That same year, Edison joined the Laws Gold Indicator Co. as general manager and soon established a partnership with two others in the electrical engineering consultation business. He sold his portion of the latter firm in 1870, and the profits therefrom allowed him to establish his own shop with a staff of assistants. In 1874, he made quadruplex telegraphy, the simultaneous transmission of four different messages, practicable and, the following year, developed a resonator for analyzing sound waves. In 1876, the year in which he moved his laboratory to Menlo Park, N.J., he perfected the carbon telephone transmitter. In 1877, Edison invented the phonograph – perhaps his greatest achievement from the standpoint of inventive ingenuity.

If one can regard the phonograph as Edison’s greatest invention, the one for which he is best remembered, the incandescent lamp, was not his at all. The principle had been known since Sir Humphry Davy’s experiments in 1802, and inventors had toyed with the idea through the first three quarters of the 19th century, hampered at first by the lack of a satisfactory source of electricity and later by the twin problems of short life and poor luminous output.

Later, in 1883, he made his only truly scientific contribution when he discovered the “Edison effect.” He showed that his incandescent lamp could act as a valve admitting negative electricity but rejecting positive. Ironically, he abandoned the discovery because, as an inventor, he saw no practical use for it. Later, his find became the basis for the vacuum tube so important to the development of radio and television transmission and reception.

Edison moved his laboratory to West Orange, N.J., in 1887. In 1891, he invented a “kinetoscope,” a device for showing photographs in rapid succession to give the illusion of a moving picture. It was not a motion picture projector in the modern sense, for it utilized neither projector nor screen. It remained for Thomas Armat to devise a machine capable of projecting a picture from film onto a screen in 1895. Edison only acquired the patent to Armat’s invention and improved it. He also used the projector in the first commercial showing of motion pictures on 23 April 1896 in New York City. Seventeen years later, he demonstrated a method of synchronizing sound with motion pictures and laid the foundation for sound movies.

The Thomas A. Edison is the first U. S. Navy submarine to carry the name of an inventor—as well as an honorary admiral. For while Thomas Alva Edison invented the electric light bulb, the phonograph, and 1,150 other items, the “Wizard of Menlo Park” also served with the Navy during World War I as a top civilian “officer.” The late Josephus Daniels, then Secretary of the Navy, called Edison to Washington in 1915 to head a group of 22 scientists who comprised the Navy’s first Naval Consulting Board—later to become the Office of Naval Research. Charged with designing new methods and devices to combat the U-boat menace and advising the Navy in scientific matters, the group eventually became known as the Edison Consulting Board. The Edison board’s contributions included surface-ship listening devices designed to detect U-boats and the installation of loudspeaker telephones aboard ship. The most far-reaching accomplishment of the consulting group, however, was in Edison’s convincing Congress to appropriate money for the first Naval laboratory in which scientists could develop weapons for the country’s defense. Built near Washington, D. C., the Naval Research Laboratory has been instrumental in the development of radar and scores of other discoveries vitally important to the country’s defense. *

When World War I erupted, Edison began devoting a large portion of his talent to defense-oriented inventions. He developed substitutes for drugs, dyes, and other items that the United States had previously imported from blockaded Germany. He also worked on a process to make synthetic carbolic acid and other substances necessary for the manufacture of explosives. He headed the Navy’s consultative board and conducted research on such things as torpedo mechanisms, flame throwers, and submarine periscopes. Following the war, he continued his experiments despite his age, looking for improvements in wireless telegraphy, radio, electric power, motion pictures, and even the automobile and airplane. In his eighties, Edison embarked upon the attempt to produce synthetic rubber from domestic American plants. While so engaged, he collapsed in his laboratory on 1 August 1931 and died several weeks later on 18 October.

From a 1960’s book on nuclear submarines:

The USS Thomas A. Edison is 410 feet long and displaces 6,900 tons. She is powered by a nuclear reactor and carries equipment unknown a few years ago, such as an inertial navigation system which enables the ship’s position to be determined with pin-point accuracy. Two crews, designated “Blue” and “Gold,” each consisting of about 12 officers and 100 enlisted men, alternately take the ship to sea. An advanced-design Fleet Ballistic Missile submarine, the Thomas A. Edison, is a member of our nation’s prime deterrent force. Her motto “Potentia Tenebras Repellendi” (Power to Repel the Darkness) well summarizes her mission.

The ship is divided into six watertight compartments.

The forward-most compartment, the Torpedo Room, houses the torpedoes and torpedo tubes which provide the ship with a highly effective attack and self-defense capability.

The Operations Compartment contains on the upper level the stations for ship control, navigation, and torpedo fire control. 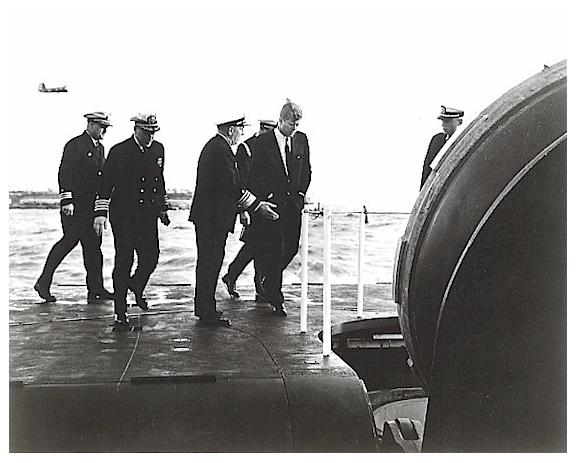 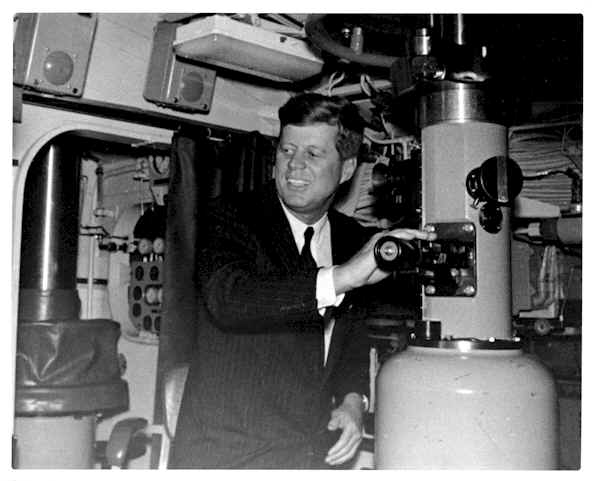 On the middle level the officers’ and chief petty officers’ living quarters and the crew’s dining and recreation area are located.

The crew’s living area and the Polaris’ fire control equipment occupy the lower level. Aft of the Operations Compartment is the ship’s largest section, the Missile Compartment.

The Missile Compartment houses the sixteen missile tubes with their associated systems and the ship’s stabilization gyroscope.

The three aftermost of the ship’s compartments contain the engineering plant which pro vides the ship’s propulsion, electricity, and other necessary services using energy from the nuclear reactor.

Some of the submarine’s components include 4,500 valves, 4,500 tons of steel, and 130 miles of cable. Optimum utilization of the ship’s deterrent capability dictates operation in sub merged patrols of several months’ duration. During these patrols the ship is completely isolated from the outside environment and completely dependent upon its own facilities for all its needs.

Nuclear warheads per missile: One 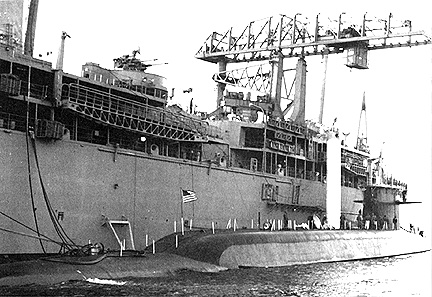 The USS THOMAS A. EDISON (SSBN-610), an Ethan Allen-class submarine, was commissioned on 10 MAR 1962. Built by the Electric Boat Division of the General Dynamics in Groton, Connecticut, USS THOMAS A. EDISON was involved in a collision with a US destroyer during her shake down training off the East Coast of the US in 1962. THOMAS A. EDISON spent the first four years of her service life sailing on North Atlantic – Arctic Ocean deterrent patrols from Holy Loch, Scotland. USS THOMAS A. EDISON returned to the US for overhaul in 1966-67. After overhaul she served with the Atlantic fleet until June 1973 when her homeport was changed to San Diego, CA. USS THOMAS A. EDISON was overhauled again at Mare Island NSY in 1973-74 and resumed duty with the Pacific Fleet. In December 1975 USS THOMAS A. EDISON changed her homeport to Apra Harbor, Guam. Following shakedown training off the eastern coast of the United States, Thomas A. Edison loaded Polaris missiles at Charleston, S.C., and embarked upon her first deterrent patrol on 7 November. She concluded that patrol at the base at Holy Loch, Scotland, whence she operated for the next four years and 17 deterrent patrols. In September 1966, her official home port was changed from New London, Conn., to Charleston, S.C., in preparation for her first major overhaul. She ended her 17th patrol at Charleston on 15 October 1966 and began her overhaul on the 28th. She completed repairs on 9 May 1968; and, after post-overhaul sea trials and shakedown, she embarked upon her 18th deterrent patrol on 22 September 1968. Over the next five years, she operated out of New London and Rota, Spain, from which ports she conducted another 19 patrols in the Atlantic.

In June of 1973, she was transferred to the Pacific Fleet, arriving in San Diego on 11 July. After a short period of operations with Submarine Group 5, she moved to Vallejo on 6 August to begin another overhaul, this time at the Mare Island Naval Shipyard. On 30 November 1974, the fleet ballistic missile submarine completed repairs and, following shakedown in January and February of 1975, she transited the Panama Canal again in March to fire test missiles near Cape Canaveral, Fla. She concluded that mission in July and retransited the canal on 8 August. Thomas A. Edison carried out operations along the west coast until December at which time she headed for her new home port, Guam. As of the beginning of 1980, the fleet ballistic missile submarine continued to conduct deterrent patrols from her base at Guam.

After 18 years of service, the THOMAS A. EDISON was redesignated as SSN 610 to comply with the SALT I treaty on October 6, 1980, and concrete blocks were placed in the missile tubes to disable the submarine’s missile launch capability. She served as an attack submarine (SSN) mainly doing exercises until she was decommissioned on December 1, 1983, and stricken from the Navy list on April 30, 1986.

On October 1, 1996, the THOMAS A. EDISON entered the Navy’s Nuclear Powered Ship and Submarine Recycling Program at the Puget Sound Naval Shipyard, Bremerton, Wash., which was completed on December 1, 1997.The hulk of THOMAS A. EDISON was disposed of by Ship and Submarine Recycling Program, Puget Sound NSY, Bremerton, Washington by 1997. 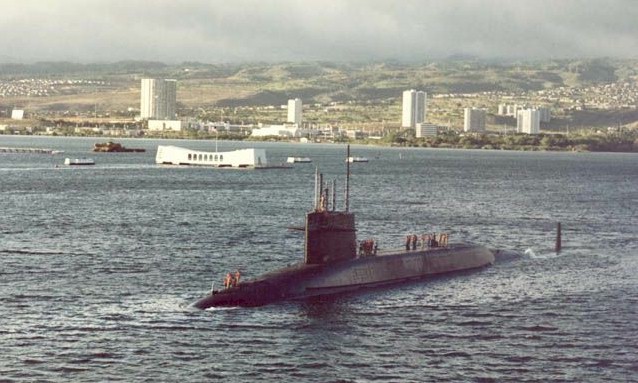