This will be the final chapter in the USS Pittsburgh story. On April 15, 2020, Commander Jason Deichler posted his farewell note on Facebook. He is leaving the boat for his new assignment and this was his last official act as the skipper.

The Los Angeles-class, sometimes called the LA-class or the 688-class, is a class of nuclear-powered fast attack submarines that forms the backbone of the U.S. Navy’s submarine force. Sixty-two submarines of this class have been completed, less than half are still in active service.

The Los Angeles class contains more nuclear submarines than any other class in the world. The class was preceded by the Sturgeon class and followed by the Seawolf. Except for USS Hyman G. Rickover (SSN 709), all submarines of this class are named after American cities and a few towns (e.g. Key West, Florida, and Greeneville, Tennessee). This system of naming broke the Navy’s long-standing tradition of naming attack submarines for creatures of the ocean (e.g. USS Nautilus (SSN 571).

The contract to build Pittsburgh was awarded to the Electric Boat Division of General Dynamics Corporation in Groton, Connecticut on 16 April 1979, and her keel was laid down on 15 April 1983. She was launched on 8 December 1984, sponsored by Dr. Carol Sawyer, and commissioned on 23 November 1985. 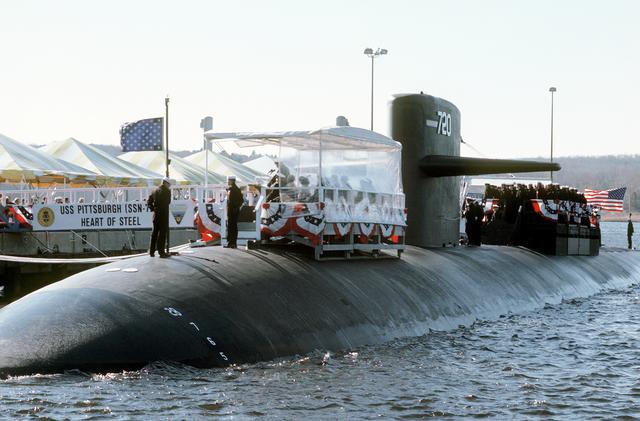 I was serving on board her sister ship, the USS San Francisco (SSN 711) when the keel was laid. My next tour was on the USS Ohio (SSBN 726) and by the time Pittsburgh was commissioned, I went to my first and only shore tour.

My Dad and Mom went to the commissioning and Dad spoke very kindly about a boat that bore the name of the city we called home. To be honest, we did not actually live in Pittsburgh, we lived in the suburbs. But Dad was a Steelers fan through and through and worked on the North Side for most of his working life at Mack Trucks. I still remember him parking the houseboat on the pier next to Three River Stadium to go to Pirates games.

Many of us from Pittsburgh went to the inactivation ceremony in Keyport Washington in January. It was the last trip most of us would take before the virus hit the world. Thankfully everyone made it safe despite Seattle being an early hot spot. I went downtown on my last day there and had a meal at a crab restaurant. I have to admit I was a little freaked out later when I thought of how many Chinese people were in close quarters in the restaurant.

The final act of any command is the decommissioning. It was not a shock when Jason let us know that the day had come. I guess in some ways it was anti-climactic. But as of April 15, 2020, the submarine known as the USS Pittsburgh has officially joined so many of her sister ships in decommissioning.

Today I signed the official paperwork that decommissioned the MIGHTY USS PITTSBURGH (SSN 720). 37 years ago, to the day, PITTSBURGH’s keel was laid, and since that glorious day, she has defended our nation while yielding generations of heroic sailors and families. I had the honor of leading the final crew of USS PITTSBURGH over these last two and half years.

The PITTSBURGH leaves behind a legacy that includes ending the Cold War, conducting the first vertically launched submarine tomahawk strike, participation in OPERATION DESERT STORM and IRAQI FREEDOM, progressing the Global War on Terror, and countless missions around the globe. She also leaves behind a proud legacy of STEEL MEN!

Today belongs to those STEEL MEN, their families, and the supporters of PITTSBURGH. To my crew – I could not have asked for a better group of submariners. Each of you was asked to do the impossible, and you made your achievements look pedestrian. Excelling at the ordinary day-to-day minutiae of submarining made you EXTRAORDINARY. I was privileged to watch this greatness.

Our families were asked, within less than two months of return from deployment to conduct an unaccompanied, cross-country change of homeport. Rising to the challenge, Page Patterson prepared our crew as my first OMBUDSMAN. Her leadership throughout the deployment was key to the sanity of our families. My current OMBUDSMAN, Michelle Waters, led our crew through the unique challenge of inactivation. She was a solid and steady sounding board during a time when most crews falter. Michelle, thank you for your honesty and calm hand.

The supporters of PITTSBURGH showed their BLACK and GOLD pride for the past 37 years, and once again, finally, in January 2020 during our inactivation ceremony. Although we turned our eye and actions to the health of the nation in March with the global pandemic, we were blessed to have one of the final submarine ceremonial gatherings of 2020. It is a memory that I will cherish forever. Dr. Carol Sawyer, the ship’s sponsor was able to see her crew and submarine one last time; providing us with words of encouragement that are apropos even today – “This good and great America.” Those words are imprinted upon my heart, as a good and great nation fights through these unprecedented times. Mr. Bob MacPherson, President of the Pittsburgh Navy League, and personal friend and mentor, presented numerous proclamations to the crew. But most importantly, he provided and still provides, unending service, faith and hope to his country and submarine brothers. Paula Bozdech-Veater, Pittsburgh Navy League, was always there with a smile, Iron City, and motivation that marked her career as a Naval Officer. She stood right alongside the families during that final windy homecoming. John Caspero, Captain of the Pittsburgh Relief Crew, supported our crew through parties, scholarships, and warm meals. Huey Dietrich and the boys of the Pittsburgh Submarine Veterans were a constant presence, ready to raise a beverage, see how their crew was doing, and provide an example for us future SUBVETS.

To the City of Pittsburgh, Mayor @billpeduto and all of our #412 supporters, it has been an honor, as one of your native sons, to lead our great submarine into harm’s way for the last time. We will always bleed BLACK and GOLD with you.

Finally, to my beautiful wife, Michelle Deichler, and family – this tour has been unexpected, uncharted, and at times, unending. But with Michelle’s steady hand and selfless sacrifice, I was able to lead with a clear heart and vision. Michelle with always be my greatest strength and greatest mentor. My leadership is learned from you. To my children, Dad is finally coming home.

So for one last time, raise those towels, swing them round and exult – HERE WE GO!! 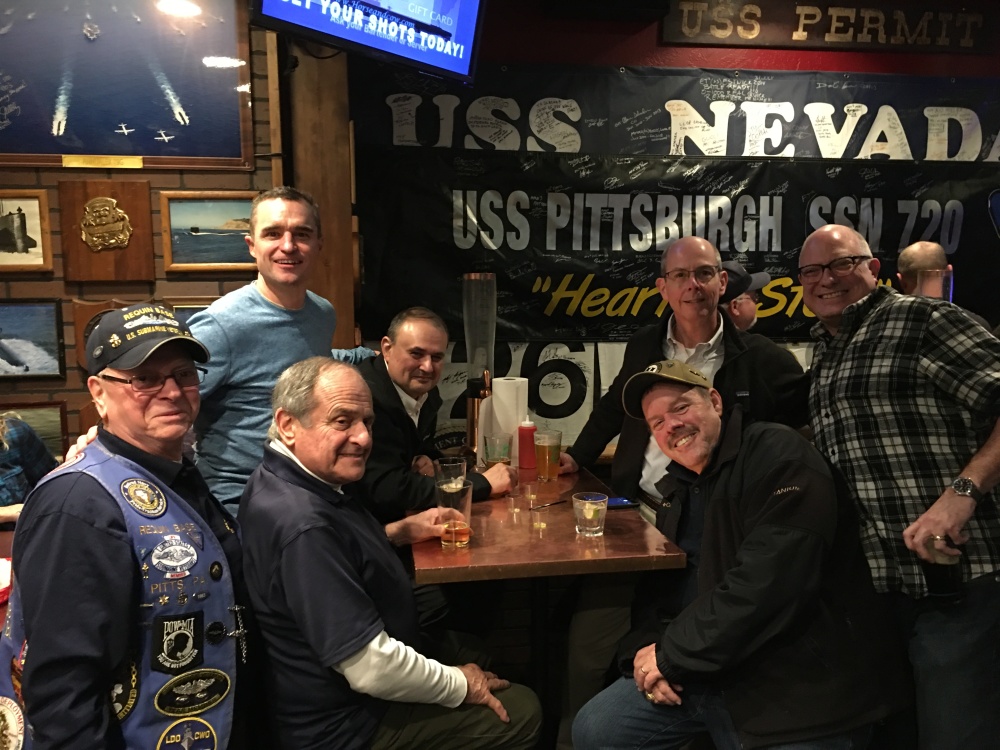 I thank the Captain for his friendship and his patience with all of the various factions that claimed ownership to the boat. It must not have been easy balancing all of the feelings of people who claim special bonds with the boat. I know in my case, it was a family thing. In the end, the Navy picked exactly the right man for the mission.

Not only did Jason operate the boat with flawless skills as a Submariner, but he was respectful to all of the groups that played a role in the boat’s life. Behind the face of a true Submariner lies one of the most skillful diplomats I have ever known. Jason made sure that everyone involved was treated with equal grace and respect. That was an amazing feat and one which makes him stand head and shoulders above nearly every Captain I have ever worked with or served under. 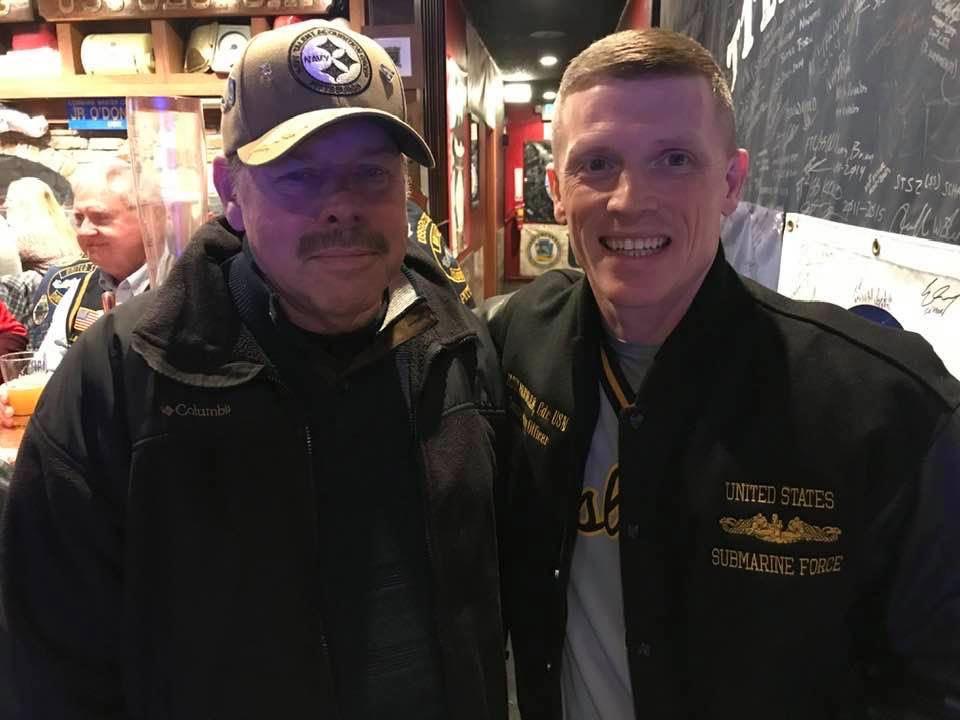 I once told him I would have been proud to serve with him in any capacity. That remains true today and as long as I live.

Thanks my friend. God bless you in your new assignments.