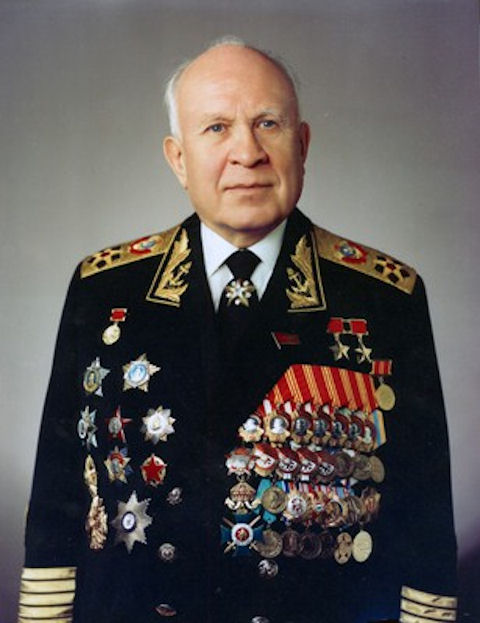 The flag of the Soviet Navy flies over the oceans of the world.

Sooner or later the United States will have to understand it no longer has mastery of the seas.

Admiral of the Fleet of the Soviet Union S. G. GORSHKOV

I’m sure some people wonder why I spend so much time looking at the 1950’s and 60’s. I have to admit that despite growing up less than fifteen miles from Bettis Atomic plant, I didn’t think about submarines all that much growing up. I was born in 1954 so there has never been a time in my life that nuclear submarines did not play a role in the life of a young boy from McKeesport as well as the rest of the world.

Yet, it was in the 1950’s and beyond that nuclear submarines and the Soviet Union dominated much of my life. In those years, great debates still were playing out about whether the next war would end civilization or not. Would limited nuclear exchanges be possible or would the use of atomic weapons automatically lead to full scale destruction.

These events touched us even in the classrooms of our elementary schools. We practiced duck and cover and knelled in the hall in a vain attempt to show that we might somehow survive a first strike. Our hometown was ringed with missile bases that were designed to shoot down Soviet bombers but would have been useless if missiles had been used instead. You can still see the leftover remains of the Nike sites not far from where I am sitting. The targets for those bombers would have been the steel mills and atomic plants producing products for the growing submarine force.

But the Soviets did no always acknowledge the importance of an ocean going force. World War 2 had forced them to be more focused on land wars. It wasn’t until after Stalin’s death that things started to change.

The following articles are from 1960’s and 1970’s declassified intelligence briefings.

In the United States, we had a visionary name Rickover to lead the Navy into its place as a nuclear power. On the Soviet side, they had an Admiral named Sergei Gorshkov. This is his story and the story of the growth of the Soviet Submarine Fleet:

“The masters of the Kremlin during the mid-1950s paid little attention to naval matters. Rather, economic and internal political problems were their main concern. During this period some warship building ways were turned to merchant ship construction.

Nikita Khrushchev initiated new naval policies when he emerged as the new ruler of the Kremlin. In 1956 he appointed Sergei Gorshkov, a 45-year- old admiral who had been promoted to rear admiral at the age of 31, as Commander-in-Chief of the Soviet Navy. Admiral Gorshkov presided over the dismantling of much of Stalin’s Navy: existing battleships were scrapped, as were several older cruisers and destroyers; many personnel were either retired or dismissed; and, all of the several thousand land- based fighter aircraft of the Soviet Navy were transferred to the National Air Defense Forces.

In the place of Stalin’s planned ocean-going fleet, Admiral Gorshkov was directed to develop a missile-armed fleet of small craft and submarines which could “defend the Soviet Union from possible Western aggression.” It was hoped that comparatively inexpensive guided (cruise) missiles could counter the U.S. naval forces that were being built up, in part, because of the Korean War (1950-1953). Soviet military planners were particularly concerned with U.S. aircraft carriers that could launch planes carrying nuclear bombs while several hundred miles from the Soviet coasts, and with amphibious forces that could land troops on the Soviet coasts.

During the 1950s the Soviet Navy developed destroyers and submarines that could fire missiles against U.S. aircraft carriers while the Soviet ships remained under the protection of land-based fighter aircraft. For coastal defense, the Soviets built the famed KOMAR and then OSA classes of missile boats which were armed with STYX (SS-N-2) anti- ship missiles. Also, several hundred medium bombers were transferred to Soviet Naval Aviation for use in the anti-ship role.

By the late 1950s Admiral Gorshkov was able to obtain approval for larger missile-firing ships. The first of these ships were the missile-firing cruisers of the KYNDA-class. Each of these ships has eight launching tubes plus eight reloads for the SS-N-3 anti-ship missile. With target acquisition provided by either an aircraft, a submarine, or a surface ship, the missile can deliver up to a ton of high explosives or a nuclear warhead against hostile ships some 250 miles away.

This concern for countering aircraft carriers was intense during the 1950s and 1960s, and substantial resources were dedicated to this task. Although today the strategic missile submarine force and anti-submarine warfare receive greater emphasis, the Soviet Navy still maintains formidable anti-carrier forces. The newest weapon system being assigned to this task is the supersonic BACKFIRE bomber.

Soviet concern for the U.S. carrier force was based on the strategic strike capabilities of carrier- based aircraft. The Navy’s role was expanded in 1960 when the first U.S. ballistic missile submarine, the GEORGE WASHINGTON, went to sea. The GEORGE WASHINGTON is a nuclear-powered submarine carrying 16 strategic POLARIS missies. Forty-one U.S. ballistic missile submarines were completed from 1960 to 1967, providing a massive deterrent to Soviet aggressive actions. 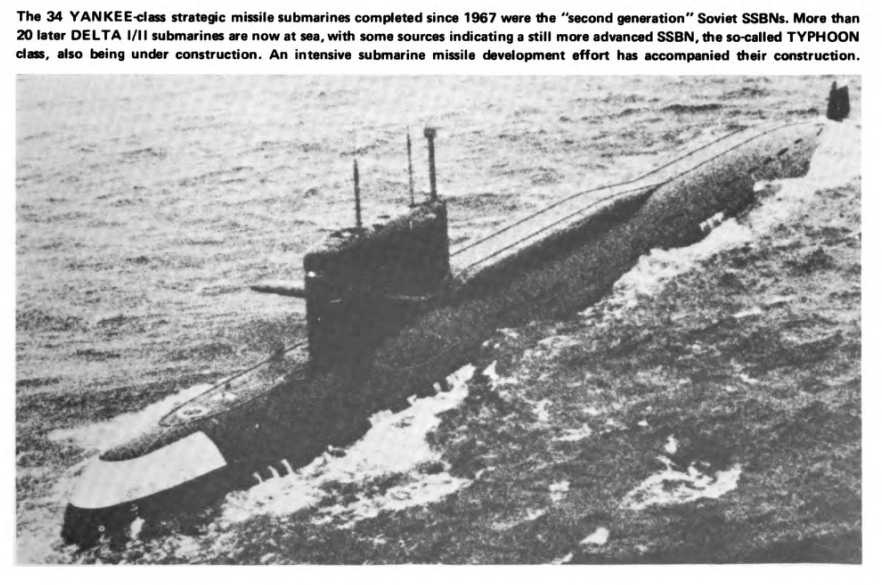 Response by the Soviet Navy to U.S. strategic missile submarines included construction of new classes of anti-submarine ships, among them the unique helicopter carrying missile cruisers MOSKVA and LENINGRAD. These ships, described in detail in a subsequent section, each operate some 18 ASW helicopters fitted with submarine detection devices and capable of carrying depth bombs or torpedoes.

The Soviet Navy under Khrushchev thus was configured as a defensive force, initially for close-in coastal defense, then to attack approaching U.S. aircraft carriers, and then to counter the threat from strategic missile submarines. However, the ships, submarines, and aircraft developed for the mission would be capable of carrying out other Soviet military objectives as well as supporting political and even economic goals. Like western navies before it, the modern Soviet fleet would prove to be a highly flexible instrument for the nation’s leadership.

Despite this concept of a balanced navy, Gorshkov exhibits a distinct bias for submarines — particularly ballistic missile submarines. Throughout his writings he gives submarines the highest praise of any units in the Soviet Navy. 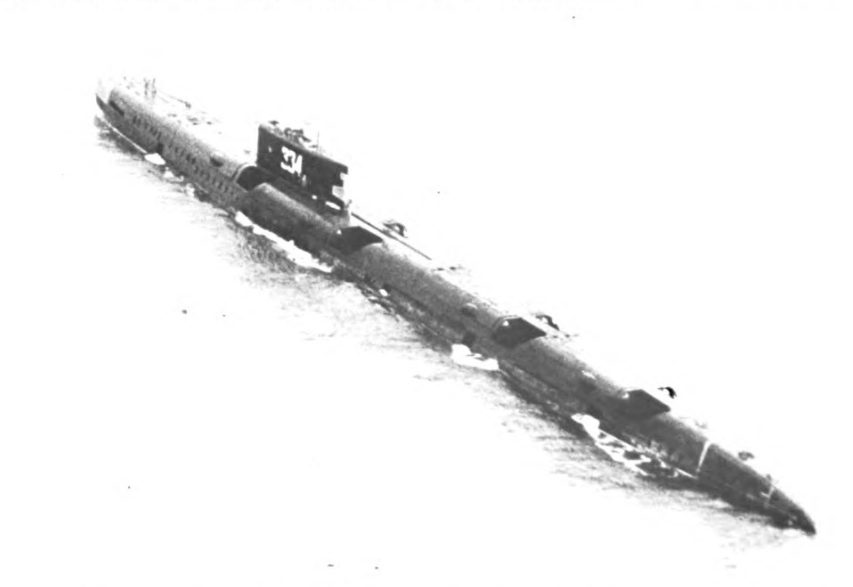 In the seventies he has continued to note that the “basis of our navy is nuclear-powered submarines of various types with great endurance and high combat qualities.”

The Soviets gave priority to the development of submarines because, as Gorshkov says in his book: they enabled our navy to increase its attack capabilities in the shortest possible time in order to pose a serious threat to the main forces of the enemy navy in the ocean theaters, and to do this at a cost of fewer resources and less time.

One interpretation of this statement is that over a longer period of time and with greater availability of resources, submarines might not have received the highest priority. Elsewhere in his book, however, Gorshkov continues to give clear priority to submarines, even though other forces seem to be getting more and more press coverage.

In describing the Soviet submarine force, Gorshkov expresses satisfaction with the achievements of his ballistic and cruise missile- equipped submarines, while revealing that some of the submarines have an incipient anti-SSBN capability. Specifically he notes that “submarines are also becoming valuable antisubmarine combatants, capable of detect ing and destroying the enemy’s missile-carrying submarines.”

Speed and range are the qualities Gorshkov values the most in submarines. Although he stresses the continuing value of diesel submarines, he prefers nuclear units.

4 thoughts on “We had Rickover – They had Gorshkov; The whole world watched”