Why do you need so damn many submarines?

I can almost hear the Air Force Brass asking that question of the Navy as they were presented the “threat” profile developed by the intelligence agencies in 1959.

1959 was a pivotal year for submarine development in the United States. The military in general was going through a growing phase based on the Soviet Union’s success in launching Sputnik and their rapid growth behind the Iron Curtain. Korea and now the early phases of incursions into South East Asia were reminders that the goals behind the Soviet vision was world domination. Even the Chinese Communists had demonstrated their power in establishing a stranglehold over much of Asia.

The United States during and after World War 2 used many methods to help develop strategy and tactics. Part of that methodology involved gathering intelligence and attempting to make as accurate an estimation as possible with the information available.

There was a natural tension between the Air Force and the Navy during this critical time period. The Soviets had invested heavily in their air arm. The key method for delivering their sizeable nuclear weaponry was an overwhelming force of planes and later jets along with a growing ballistic missile threat. The Air Force had invested heavily in a nuclear powered bomber program that was literally grounded by 1959. The vision of having high flying bombers with miniature nuclear reactors on board was never realized and even John F. Kennedy was stunned by how much money had been invested in the flying egg.

The answer came in the form of the Navy’s determination to build and operate a nuclear powered submarine fleet. 1959 was critical since it introduced the FBM concept at the same time it introduced the faster and deeper diving Fast Attack submarines.

The Soviets were constantly watching. Their pivot in the early 1960’s to underwater platforms was swift and mimicked the Americans at each turn.

Today’s article is revealing to those who have never seen the underlying intelligence that was used in the decision making process of American leadership. These declassified stories show much of the background under which the decision to rapidly build a nuclear submarine fleet existed.

I am including a link to the whole report. I only focus on the submarine related parts of the story, but if you have the time (and who doesn’t these days) you might want to read the original uncut version.

The documents in this volume — a selection of 41 National Intelligence Estimates on Soviet strategic capabilities and intentions from the 1950s until 1983 — pertain to the US Intelligence Community’s performance of its most critical mission during the Cold War. Our purpose in producing the volume is simply to make more readily accessible to scholars, and to the public, records that shed light on the history of American intelligence and foreign policy as well as on the history of the USSR and Russia.

In November 1994, 80 additional Estimates, on Soviet strategic forces, were declassified (with some excisions). Ten of these Estimates were reproduced and distributed to those attending a conference on estimating Soviet military power that was held at Cambridge, Massachusetts, in December 1994, with CIA’s Center for the Study of Intelligence (CSI) and Harvard University’s Charles Warren Center for Studies in American History as cosponsors.

To estimate Soviet gross capabilities to attack the continental United States and certain US installations and forces overseas, as of January 1956 and mid-1959.

The problem of estimating Soviet capabilities three years or more in the future cannot be treated exclusively in terms of present indications of how these capabilities are developing. Current evidence is incomplete and sometimes even fragmentary. Moreover, this estimate is more than usually difficult in that its terminal date approximates the estimated date of emergence of a major Soviet threat in the guided missile field. For these reasons, we are obliged to make our estimate of future capabilities not only on the evidence at hand but also on the basis of judgments of how Soviet leaders may assess their future requirements.

By gross capabilities is meant the probable maximum scale of attack by existing forces, or by the forces estimated to be likely to exist at a future date, taking into account operational factors, but not considering combat attrition.

The judgments which underlie our estimate of Soviet gross capabilities in 1959 are: (a) that throughout the period of this estimate the Soviet rulers will regard it mandatory to strengthen their capabilities to attack US nuclear retaliatory power wherever located, both in the US and overseas; (b) that the Soviet rulers will consider that, although they will acquire increasing guided missile capabilities throughout the period, they must rely primarily on aircraft carrying nuclear weapons for long range attacks which will have to penetrate an ever-improving defense; and, consequently, (c) that the Soviet rulers will devote a substantial effort to the production of long-range bombers.

These judgments are supported by much current evidence. We believe them the soundest which can be made at this time. There are, however, considerations which require us to regard the Soviet gross capabilities estimated in this paper as subject to revision as the period advances: (a) the USSR may revise the size of its Long-Range Aviation, its bomber production goals, or the future balance between the types and categories of its bomber aircraft; (b) the USSR may judge it advantageous to concentrate its efforts on the rapid development of guided missile weapons systems; and (c) the greatly increasing yield of nuclear weapons’, and Soviet estimate of possible changes in the quality of the defenses to be penetrated, will each affect Soviet judgment of its requirements as to the number and types of delivery vehicles.

On these grounds we feel it necessary to emphasize that the gross capabilities described in this paper are those which the USSR could acquire, and which we believe it is likely to acquire by 1959, but we cannot say with confidence that these are the capabilities which it will have at that date.

Methods and Scale of Attack against the US

The estimates by 1962 had rapidly increased 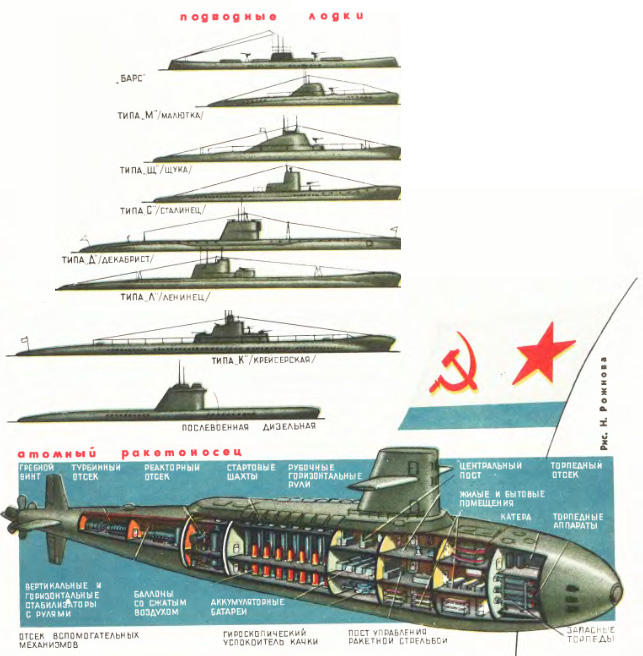 The Submarine forces of both sides provided a system that was harder to detect and harder to predict. The third leg of the Triad was the most survivable and made using the weapons almost unthinkable.  In the end, it was the existence of such a grave response to any such attack which deterred each side from doing the unthinkable. But it is also sobering to realize that such weapons have advanced and improved so much since those early days. While we no longer have a direct confrontational relationship with what is left of the former Soviet Union and the Chinese Communists, the existence of weapons and systems like these are a reminder that we can never fully rest.