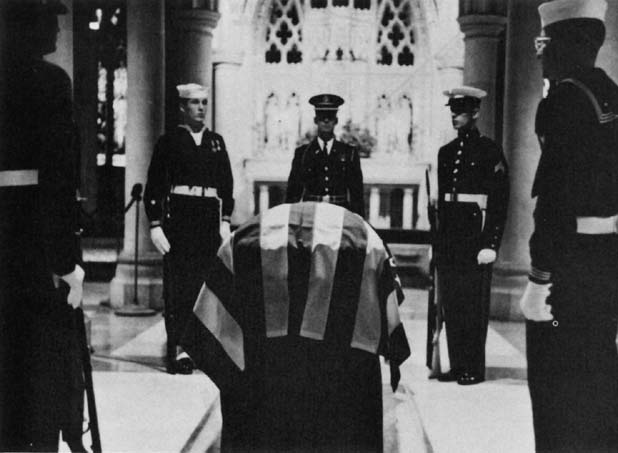 Sixty years ago today, America lost one of its greatest citizens.

He would not live to see the submarine that would later bear his name. But the work that he did for the nation ensured that freedom and liberty for many people would be assured. From his day as a cadet at the Virginia Military Institute to his death as a five star General, he never stopped serving a country that he loved. A short article like this cannot capture the whole essence of a life well lived. I have spent the past few days reading biographies of his life including one of the most complete: The Marshall story; a biography of General George C. Marshall. … Payne, Robert, 1911-1983. If you can find a copy of this book, it is well worth the read.

Even in death and the way he wished to be memorialized, he was the perfect example of a humble servant.

General of the Army George C. Marshall died at Walter Reed General Hospital on 16 October 1959 at the age of seventy-eight. By virtue of his former positions as Chief of Staff of the Army and as Secretary of Defense, General Marshall was entitled to a Special Military Funeral and, as a former Secretary of State, he was entitled to the more elaborate honors of an Official Funeral. He received a Special Military Funeral, but in keeping with his known wishes and with what has been described as his “Spartan concept of propriety,” the rites for General Marshall were among the simplest ever conducted for a man of his rank and prestige.

On the day of the general’s death, President Dwight D. Eisenhower issued a proclamation ordering the flag flown at half-staff on all public buildings except the Capitol, at all military posts and naval stations in the United States, and at American facilities abroad. The flag was to be so displayed until after the burial service.

… While the ceremony at the cathedral was in progress, some two hundred invited guests filed into the chapel at Fort Myer. Among them were President Eisenhower and former President Harry S. Truman, Secretary of State Christian A. Herter, former Secretary of State Dean G. Acheson, W. Averell Harriman, General of the Army Omar N. Bradley, General Alfred M. Gruenther, and General Matthew B. Ridgway. Members of the Marshall family entered after the President was seated; Mrs. Marshall, last to arrive, entered the chapel about 1425.

The honorary pallbearers, first to leave their cars, formed a cordon along the mat. The members of the Marshall family got out next and stood while the clergy, body bearers, national color detail, and personal flag bearer took positions at the rear of the hearse. When all were in place, the body bearers removed the casket from the hearse. Then, in procession, the national color detail, mortician, clergy, body bearers with the casket, and personal flag bearer moved through the cordon of honorary pallbearers to the grave. As the casket passed by, the honorary pall­bearers fell in behind and moved to their graveside position. The Marshall family was escorted to the graveside by the cemetery superintendent.

The clergy then conducted the burial service. At its conclusion, the battery fired a 19-gun salute, the firing squad discharged the traditional three volleys, and the bugler sounded taps. As the sound of the bugle died away, the body bearers folded the flag that had draped the casket, and one of them, the cadet from Virginia Military Institute, presented the flag to Mrs. Marshall, thus concluding the simple rites for General Marshall. Mrs. Marshall placed a small bouquet of flowers on her husband’s casket and left the graveside.

This funeral capped a lifetime of service. The story of America is dotted with many names and many heroes sacrifices. But the sum total of the contribution of George C. Marshall places him very close to the top of the list of most significant.

George C. Marshall had been named Time Magazine’s Man of the Year in 1943 and 1947. As Secretary of State from 1947 to 1949, Marshall advocated rebuilding Europe, a program that became known as the Marshall Plan, and which led to his being awarded the 1953 Nobel Peace Prize

Who was George C. Marshall?

George Catlett Marshall, born at Uniontown, Pa., 31 December 1880, was commissioned Second Lieutenant 2 February 1901 upon graduation from the Virginia Military Institute. After serving in the Philippines from 1902 to 1903 and at various posts in the Western United States, he went to the Army Staff College at Fort Leavenworth, Kans., in 1908. Graduating at the head of his class, he instructed in the school until 1910.

Assignments with the Massachusetts National Guard and the 4th Infantry in Arkansas and Texas preceded his return to the Philippines in 1913. There his brilliance on maneuvers won him prophetic praise from General James Franklin Bell, who called him: “one of those rare men who live and dream in their profession — a soldier who is not satisfied with daily duty superbly done. . . . the greatest military genius of America since Stonewall Jackson.”

When the United States entered World War I, Marshall accompanied the 1st Division to France in July 1917. In the summer of 1918, he was transferred to the A.E.F. Headquarters where he helped to formulate plans for the St. Mihiel offensive and to transfer some 500,000 troops to the Argonne front in 2 weeks without the enemy’s knowledge. In October Marshall became Chief of Operations of the 1st Army during the final action on the Meuse-Argonne sector, which helped greatly to force Germany to capitulate.

Outstanding service in a number of important assignments during the years between the wars won Marshall appointment as Chief of Staff of the Army in September 1939 when Nazi aggression plunged the world into World War II He directed the mobilization of an army of some 10 million men which operated with the Navy and Allied forces in crushing the Axis powers. He was appointed General of the Army 16 December 1944.

In 1958, Congress authorized the construction of the Fleet Ballistic Missile Submarine. A total of forty one would be built based on that early plan. These Polaris missile firing submarines were the result of extensive and imaginative development in such fields as environmental control. Nuclear engineering, inertial navigation and solid propellant rocket design. 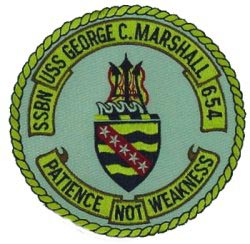 “She is so named that we may remember a man whose leadership in both war and peace was in keeping with the highest traditions of our nation.” 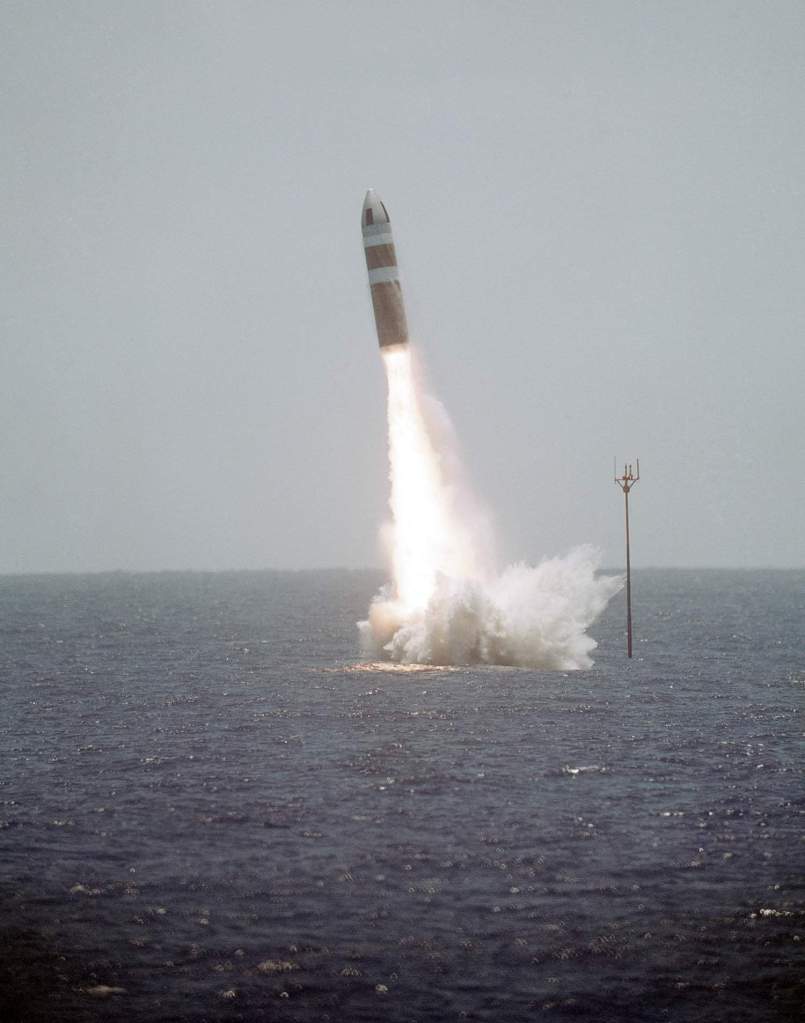 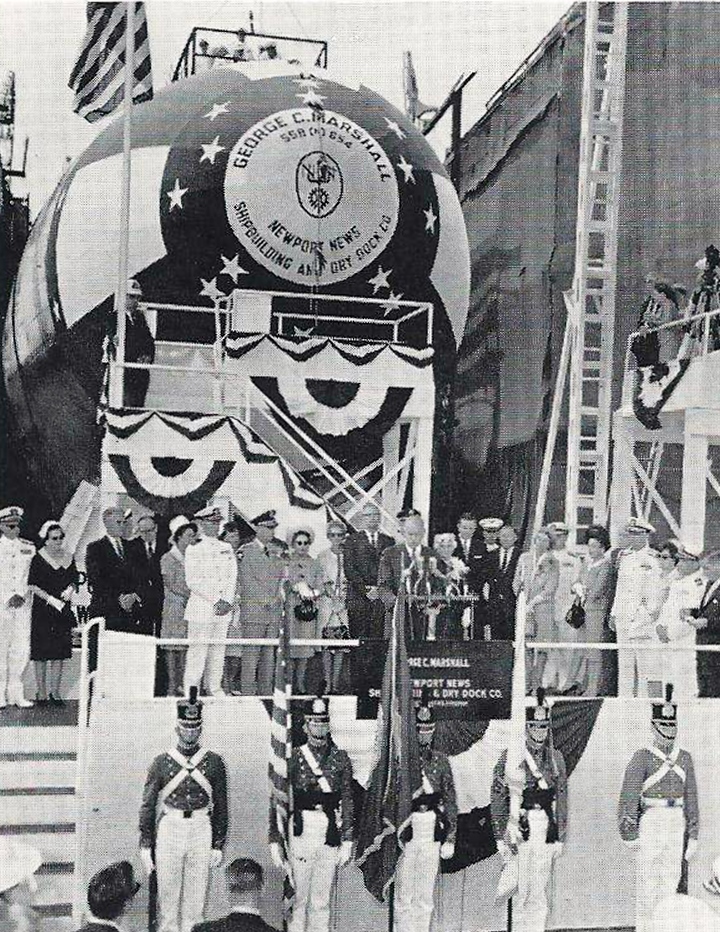 Following shakedown, George C. Marshall prepared for duty as one of the Navy’s nuclear powered Polaris sub marines silently and invisibly roving the seas as a mighty deterrent against aggression, preserving peace and protecting freedom. At her launching former Secretary of State Dean Acheson eloquently described the mighty sub marine’s role in the turbulent cold war: “. . . the waves set up by this launching will go to the furthest reaches of our foreign relations. The very existence of this ship, her power, her mission, her orders, her competence to execute them, will effect more computations, more decisions, than we can readily imagine. Far beyond the Pentagon, the State Department, and the White House she will add a new factor, a new magnitude, to the correlation of forces by which the communists determine their decisions.”

The Official Tag line was Patience not weakness… at one point the crew gave her a fitting submarine update: Patience my ass. Gotta love those submariners.

From the ALL Hands Magazine in September 1967

USS George C. Marshall (SSBN 654) is not exactly like her sister ships. She is, nevertheless, representative of the Fleet ballistic missile submarine.

The ship is the 36th F BM and the 58th nuclear powered submarine to become an operating element of the nuclear deterrent force.

Like most Fleet ballistic missile submarines, she is named for a great American. George Catlett Marshall was General of the Army, Secretary of Defense, Secretary of State, and author of the Marshall plan for European recovery. He won the Nobel peace prize in 1953.

As a member of the Lafayette class of FBM submarines, which are the largest ever built, George C. Marshall displaces 8250 tons when submerged and 7250 tons when riding on the surface. This can be compared to the nuclear powered guided missile frigate USS Bainbridge (DLGN 25), which displaces 7600 tons standard. 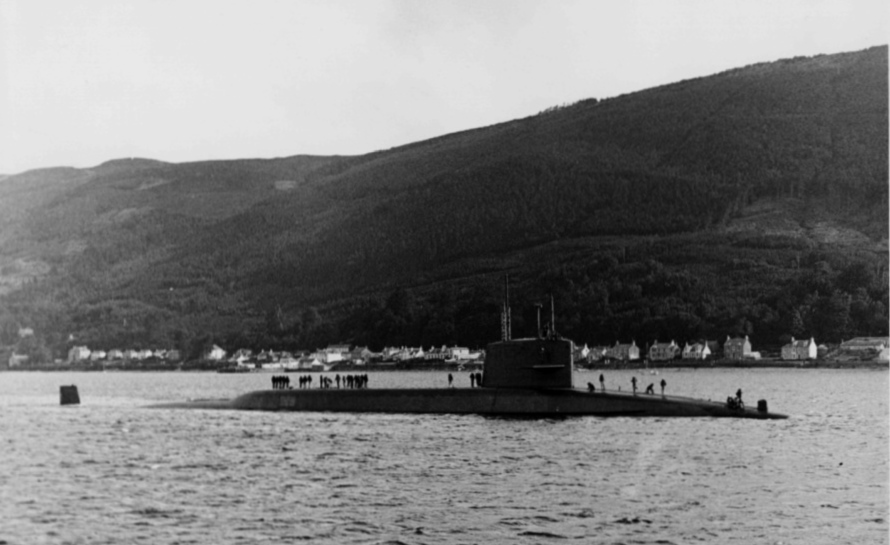 George C. Marshall is outﬁtted with the equipment to ﬁre 16 A-3 Polaris missiles.

These missiles, with a maximum range of 2500 miles, are carried in 16 tubes amidships. They may be launched either while the submarine is on the surface or under the sea.

The missiles are ejected from the tubes by means of compressed air, though later models have steam launchers. In the steam launching method, a small solid fuel rocket motor burns and pours its extremely hot gases into a water-ﬁlled chamber. This water immediately turns to steam and forces the missile out of its receptacle.

The ship can also launch torpedoes. She is equipped with four 21-inch torpedo tubes on the bow.

Like other subs of her type, George C. Marshall was built to patrol for extended periods of time. Consequently, her designers allowed as many comforts as possible. The crew has access to a small laundry, which includes washers and dryers. There is a three-man gym. A crew’s lounge also does duty as a lecture room and study hall. The galley, which would please any modern housewife is open to the crew—the submariner who prides himself as a chef practically has carte blanche.

A fellow can also get an education down there—via PACE (Program for Aﬂoat College Education), formerly known as Polaris University. It’s possible for the ambitious sub mariner to earn as much as two years of credits toward a degree from Harvard, the University of South Carolina, San Diego State College or the University of Hawaii. (For more on PACE, see ALL HANDS, January 1967.)

It requires two crews to keep up with a Polaris sub. George C. Marshall presently patrols out of Holy Loch, Scotland. Each cruise is approximately 60 days in duration, with one month between cruises. The off crew, when relieved, is ﬂown back to the U. S. for training, leave and liberty. 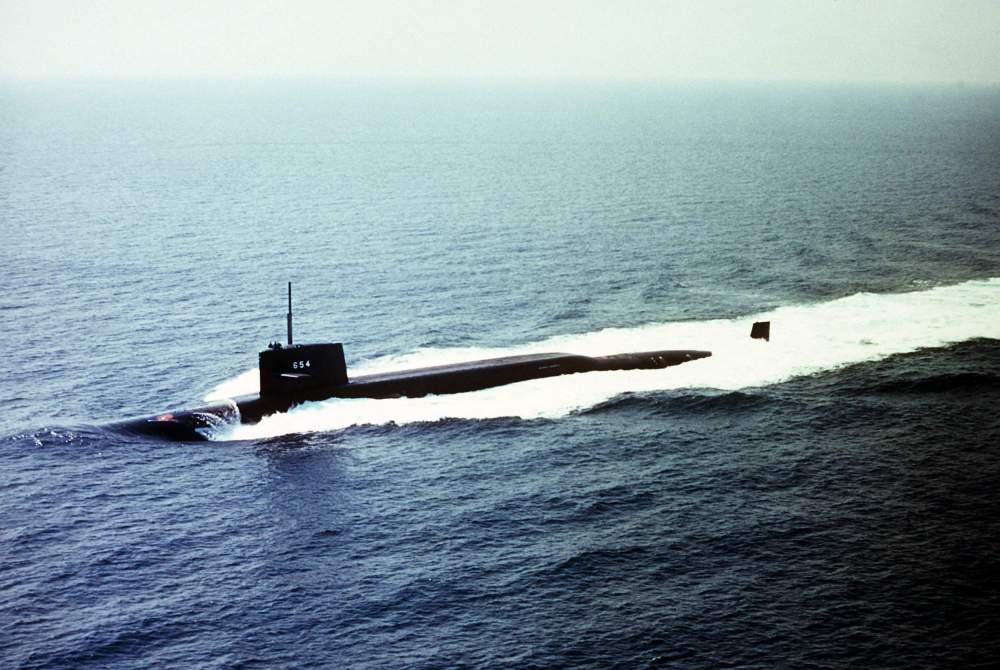 George C. Marshall slid down the ways on 21 May 1965, after Mrs. George Marshall had broken a champagne bottle across her bow. The principal speaker that day was Dean Acheson, former Secretary of State.

The nuclear submarine spent the next month alongside the pier at Newport News. She was commissioned on 29 April.

In one respect George C. Marshall is exactly like her sister ships: She has never failed to meet her commitments due to failure of the system, which includes the missile, the submarine, and the crew.