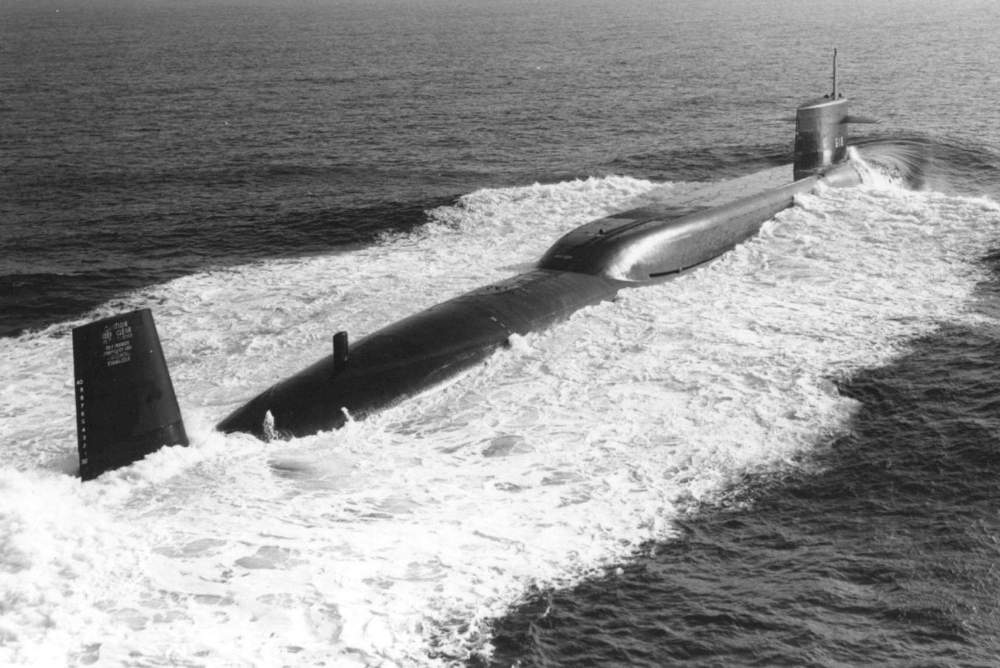 This is the third in the 41 for freedom series of Articles on theleansubmariner.

Like the first two, it captures the thoughts of the man who was the Father of the Nuclear Navy in his own words from his book about the submarines that were named after American icons.

Thomas Jefferson was a very complicated man. Anyone who has ever been to Monticello knows that he was a gifted man in many ways including his amazing capacity to see beyond just the images that were in front of him. His presidency was pivotal in so many ways. Not only was he involved during the rebellion, but he was instrumental in most of the founding documents.

Like all men, he was not without flaws. In the times we live in, those flaws are often used to diminish the achievements he made. But the truth is that the character of America was deeply influenced by his service and his sacrifice. He risked much in his efforts to liberate the American spirit and the results are clearly present in the laws that still govern us today.

This story will tell about some of the history of the man mixed with the history of the boat. But the many years of service she performed will mainly play out in the memories of the men who served on her. Those stories are often not written which is incredibly sad. I hope as I share this series, men who served on her will fill in the voids that are intentionally left when I write my articles. I strongly encourage you to share this and other 41 for Freedom stories with your fellow submariners who may have served on them. I will gladly add them to the collection. 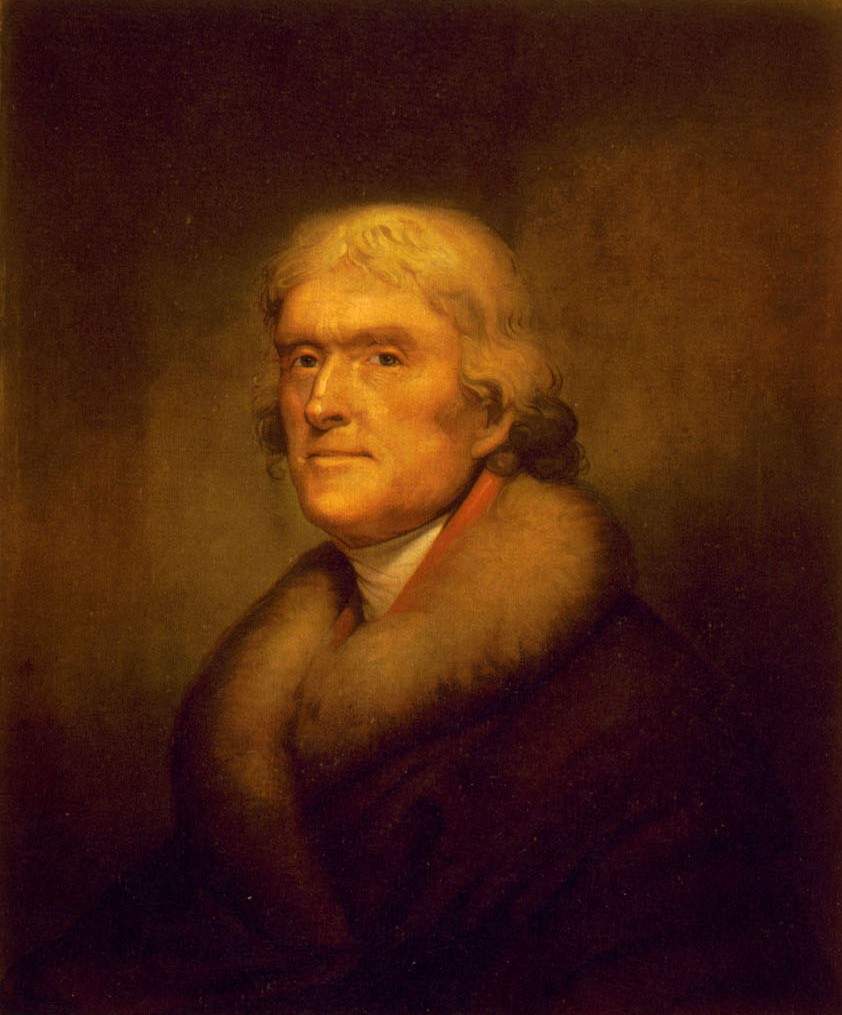 Who was Thomas Jefferson?

Thomas Jefferson was born at Shadwell, Albemarle County, Va., 13 April 1743 and graduated from William and Mary College in 1762. He was admitted to the bar 5 years later. In 1769, he was elected to the Virginia House of Burgesses where he soon became a leader of the patriot faction and helped form the Virginia Committee of Correspondence. He maintained that the colonies were not subject to Parliament but were bound to England only by allegiance to the Crown.

Jefferson was sent to the Continental Congress in June 1775, and a year later he was entrusted with writing the Declaration of Independence. He returned to the Virginia legislature in October 1776 where he labored to reform the new state on democratic principles. He succeeded Patrick Henry as governor in 1779 and held that office until 1781.

Jefferson succeeded Franklin as Minister to France in 1785 and, after his return in 1789, became the Nation’s first Secretary of State. Growing differences with Alexander Hamilton prompted him to resign from Washington’s cabinet 31 December 1793, and he subsequently led growing opposition to the Federalist party. From 1797 to 1801, he was Vice President and he defeated John Adams in the presidential election of 1800. Upon entering the White House, Jefferson introduced a more democratic tone to public life, and his two terms as Chief Executive were marked by careful administration and rare frugality. Highlights of his presidency included the Louisiana Purchase, the Lewis and Clark Expedition, and the Navy’s victory over the Barbary pirates. Their valiant and skillful fighting in the struggle with the North African corsairs gave American seamen some of their most colorful and cherished memories while strengthening the new nation’s position as a power worthy of respect.

In retirement, Jefferson exerted great political and intellectual influence as he worked to establish the University of Virginia. His brilliant career was brought to a fitting close when he died 4 July 1826, the 50th anniversary of his immortal Declaration of Independence.

Perhaps Jefferson’s place in American history was best measured by President Kennedy while entertaining the Nobel Prize winners of the Western Hemisphere. “…I think,” the President told his distinguished guests, “this is the most extraordinary collection of talent, of human knowledge, that has ever been gathered together at the White House, with the possible exception of when Thomas Jefferson dined alone.” 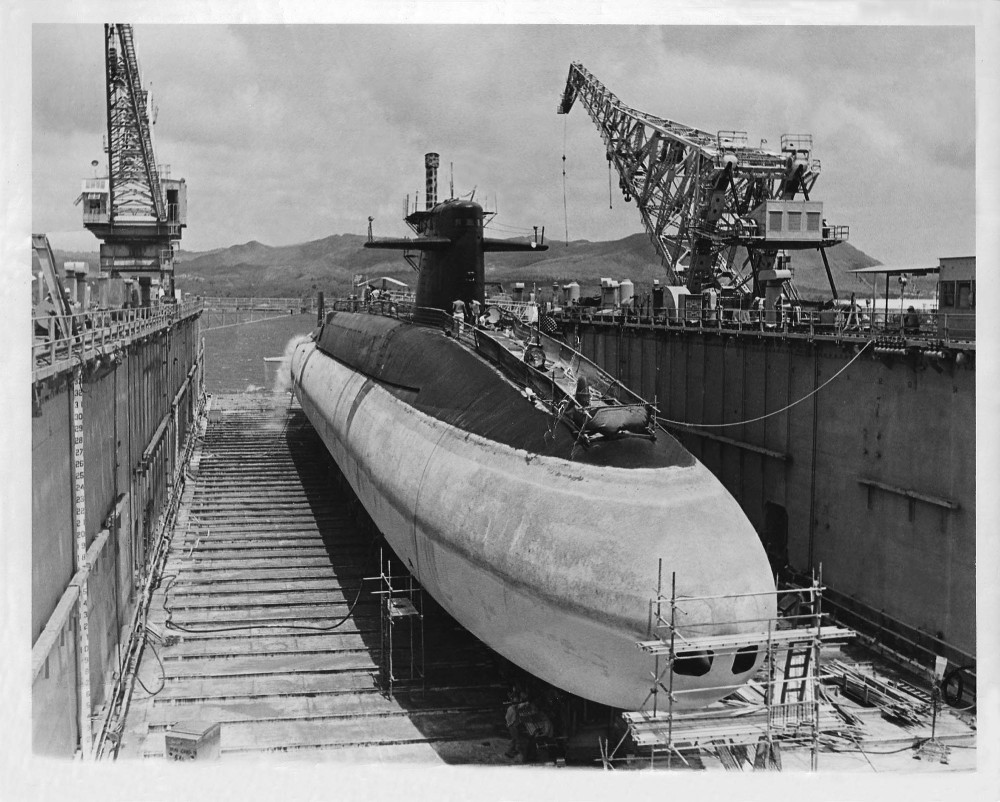 Here is what Admiral Rickover had to say about Thomas Jefferson

NAMED FOR Thomas Jefferson (1743—1826), foremost exponent of the American Enlightenment, a philosopher- statesman whose lofty ideas of the dignity of free men and the proper function of government provide the philosophical foundation on which our political system rests.

In some 30 years of public service, Jefferson held nearly every office the people could bestow. He was twice Governor of Virginia and for many years a member of the legislature. As delegate to the Continental Congress, he headed some of the most important committees; he was instrumental in the cession by Virginia of her vast territories northwest of the Ohio; for 5 years he represented the Confederation in Paris. He was Washington’s ﬁrst Secretary of State, Adams’ Vice President, and third President of the United States.

His contributions were both practical and philosophical. We owe him our decimal coinage and the geometric shape of our Western States. He bought us half a continent at the bargain price of $15 million (Louisiana Purchase, 1803), and relieved us of the tribute exacted by the pirate State of Tripoli for immunity from raids on shipping (1805), the ﬁrst head of a Western nation to challenge this ancient practice. He drafted one of our three basic charters of liberty (the Declaration of Independence) and laid the basis for the second (the Northwest Ordinance of 1787 which incorporated Jefferson’s Ordinance of 1784). Its importance to national unity was immense, notably the provision that slavery should not exist after 1800; a step which set the precedent for Federal control of slavery in the territories. Like Adams, he was abroad when the third (the Constitution) was written and ratiﬁed, but present, as it were by proxy, in the person of his close friend and political disciple, James Madison, “Father of the Constitution.” 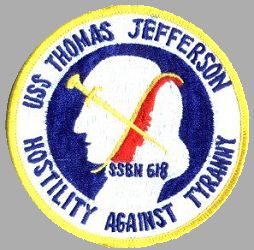 The History of the ship itself

After shakedown training by both crews and a yard availability period, the fleet ballistic missile submarine was assigned to Submarine Squadron (SubRon) 14 in early October. On 28 October, the Blue Crew took the submarine on her first deterrent patrol which ended at Holy Loch, Scotland, in December 1963. THOMAS JEFFERSON continued patrols from Holy Loch for the next four years and also acted as flagship for SubRon 14. In 1966, she returned to New London for two training and rehabilitation periods. She began her 15th deterrent patrol on 12 January 1967 and, upon its completion, returned to Newport News for her first overhaul and refueling. On 17 June 1968, the submarine was ready for sea, and refresher training was held for both crews. Her 16th patrol began on 29 October and terminated at Rota, Spain, on 5 December 1968. 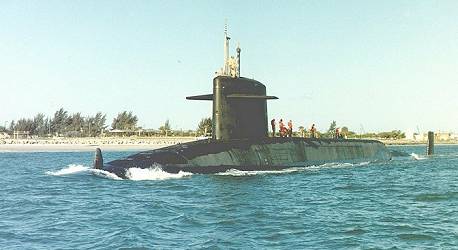 THOMAS JEFFERSON made four deterrent patrols in each of the following years: 1969, 1970, 1971, and 1972. She also conducted special operations in 1970 and 1971. On 20 October 1972, the Gold Crew was awarded a Meritorious Unit Citation for its special operations of the previous year.

THOMAS JEFFERSON completed two patrols in 1973 before returning to the United States to hold midshipman training from 18 June to 31 August. Her last patrol of the year terminated on 12 December 1973. Her 36th and final, patrol in the Atlantic lasted from 31 January to 22 March 1974. After calling at Norfolk and Charleston, the submarine returned to New London on 22 May. THOMAS JEFFERSON was then reassigned to the Pacific Fleet with her new homeport at Vallejo, Calif. She stood out of New London on 7 June en route to the west coast and arrived at Mare Island on the 27th.

On 1 July 1974, THOMAS JEFFERSON entered the Mare Island Naval Shipyard for overhaul, refueling, and conversion to the Polaris A-3 missile system. She remained in the yard until 17 November 1975 when she got underway for Bremerton, Wash. The submarine remained in Puget Sound for a month and then moved to San Diego.

During the period January to March 1976, THOMAS JEFFERSON’s Blue Crew conducted post-overhaul shakedown operations and then transited the Panama Canal to conduct a Polaris missile firing at Cape Canaveral, Florida. The Gold Crew took over the ship on 4 April and conducted additional post-overhaul shakedown operations which included a missile firing at Cape Canaveral, a transit of the Panama Canal, and a missile loadout at Bangor, Washington, before resuming deterrent patrol operations with the Pacific Fleet on 8 August.

THOMAS JEFFERSON continued these operations as a unit of Submarine Squadron 15 throughout 1977 and 1978, at the end of which she completed her 44th deterrent patrol.

The end of an era

After 18 years of service, the THOMAS JEFFERSON was redesignated as SSN 618 to comply with the SALT I treaty on March 11, 1981, and concrete blocks were placed in the missile tubes to disable the submarine’s missile launch capability. She served as an attack submarine (SSN) mainly doing exercises until she was decommissioned on January 24, 1985, and stricken from the Navy list on April 30, 1986. On October 1, 1996, the THOMAS JEFFERSON entered the Navy’s Nuclear Powered Ship and Submarine Recycling Program at the Puget Sound Naval Shipyard, Bremerton, Wash., which was completed on March 6, 1998.

I attended the joint USS Thomas Jefferson and USS George Washington decommissioning ceremonies in Bremerton Naval Shipyard. I was stationed at nearby Bangor on board the USS Ohio and had received an invitation from the Navy to see the ships final mission complete. It was odd to look at both of them. The missile compartments had been removed and the shell over the remaining part of the boat looked odd and out of place. I know my own mixture of sadness and sense of relief at the end may have been felt by many. My time on the GW was challenging to say the least and there were a few old ghosts put to rest that day. On the other hand, seeing two old warriors like that was terribly hard.

in her missions to ensure our countries freedom.