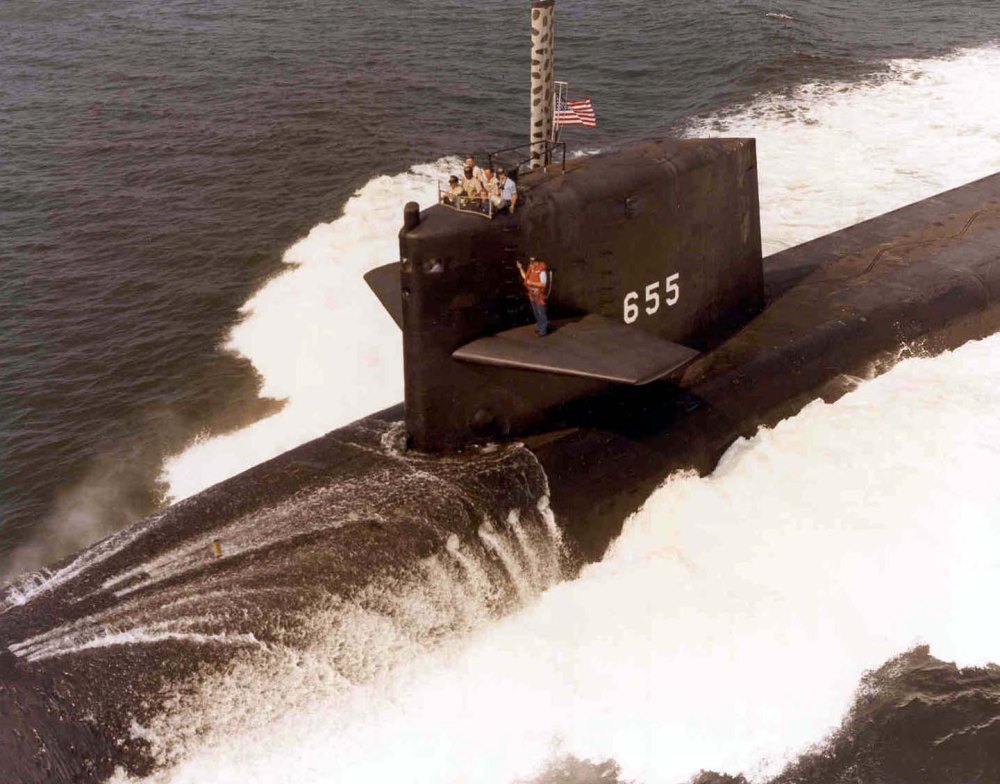 In a world where politics has become more toxic than a bucket full of radioactive waste mixed with every known chemical harmful to mankind, the example that Henry L. Stimson provided is the one shining light that still stands out like a beacon.

Stimson was a war veteran, a statesman, a leader, and a man who let his principles lead his every footstep. He served under both Republican and Democrat Presidents in times of war and peace. He never hesitated to step up when his country needed him, even in the face of tremendous criticisms from people who had once claimed to be his friends. When Franklin D. Roosevelt tapped he and Colonel Knox to respectively lead the War Department and the Department of the Navy in 1940, his colleagues in the Republican Party tried to destroy him in the press and on the floor of the Senate. They were aided by many democrats who also sought a chance to even old scores.

But Stimson and Knox were exactly the right choices for their time. When the United States entered World War 2, both men ensured that the Army and Navy were well on their way to becoming the most powerful force on earthy. Freedom for millions was on the line as was the future of the United States. These men looked past party and saw only country. After studying his story more closely in newspaper articles and records from the time, I stand in awe of Henry L. Stimson.

Naming an SSBN in his honor was absolutely the right thing to do. I only wish I had half the courage this man demonstrated in the face of tremendous pressure. 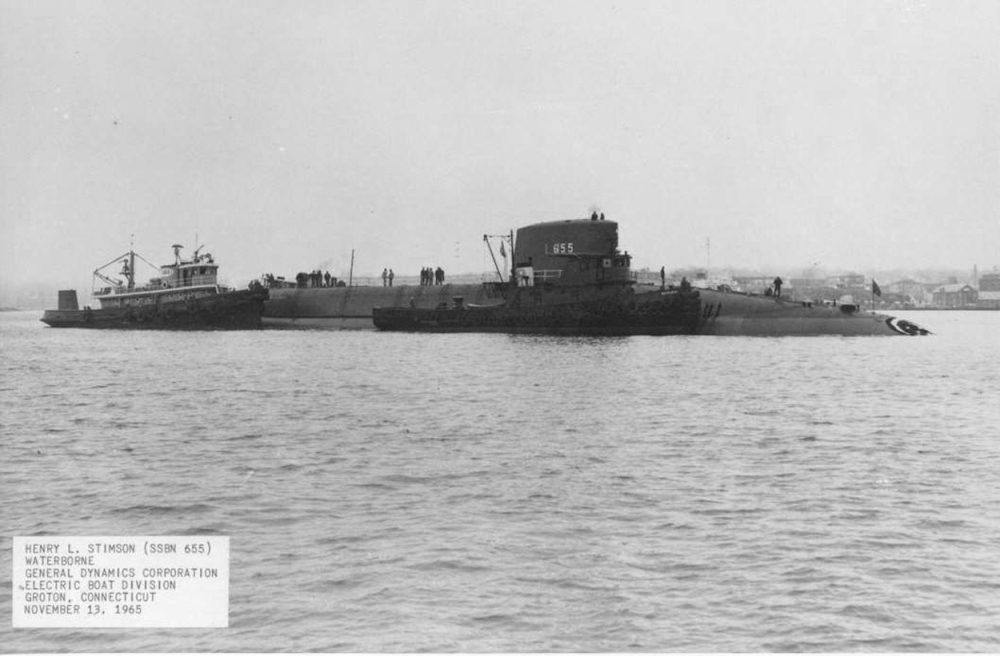 The contract for the construction of Henry L. Stimson was awarded on 29 July 1963, and her keel was laid down on 4 April 1964 by the Electric Boat Division of General Dynamics Corporation in Groton, Connecticut. She was launched on 13 November 1965, sponsored by Grace Murphy Dodd, wife of United States Senator Thomas J. Dodd, and commissioned on 20 August 1966 with Captain Richard E. Jortberg commanding the Blue Crew and Commander Robert H. Weeks commanding the Gold Crew. 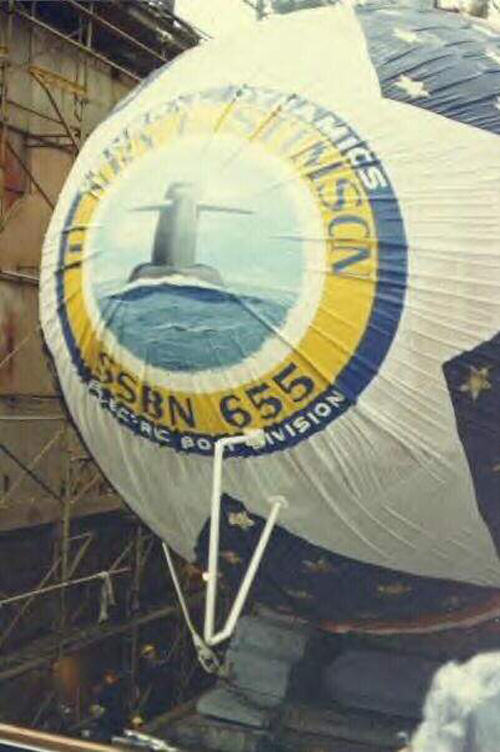 More about the boat from the boat’s web site:

“The crossed swords in the insignia of the USS HENRY L. STIMSON represent his belief that to keep peace you must be strong to resist aggression. During shakedown, both crews successfully fired two A-3 Polaris missiles in the Atlantic Missile Test Range. After final sea trials and torpedo fire control systems testing Henry L. Stimson was assigned to Submarine Squadron 16 and began her first operational deterrent patrol, departing Charleston, South Carolina, on 23 February 1967.

STIMSON received a Meritorious Unit Citation (MUC) for meritorious service during the period from 19 August to 9 September 1970, while participating in an operation of great importance to the United States. Through the operation the STIMSON demonstrated conclusively the effectiveness and dependability of the Fleet Ballistic Missile System. 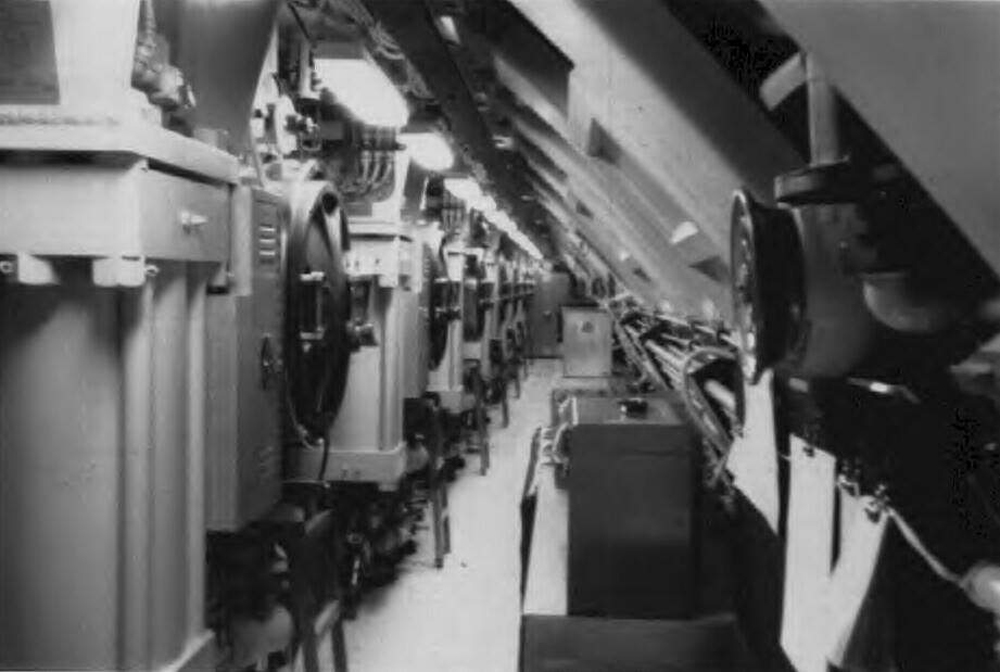 In June 1973, both crews successfully completed their Demonstration and Shakedown Operations (DASO). After Post Conversion Availability and final sea trials, HENRY L. STIMSON returned to perform as a major force in the prevention of nuclear war.

During the period from November 1979 to March 1980, STIMSON’s weapon system was again upgraded to support the TRIDENT-1 missile. The conversion was accomplished pier side at Port Canaveral, Florida. Successful Demonstration and Shakedown Operations (DASO) by both crews after the ship conversion were climaxed by the launching of a TRIDENT C-4 missile. Following that conversion, the boat changed homeports to Kings Bay, Georgia, where she was based for the rest of her career. The ship deployed on her first TRIDENT-1 strategic deterrent patrol in May 1980. 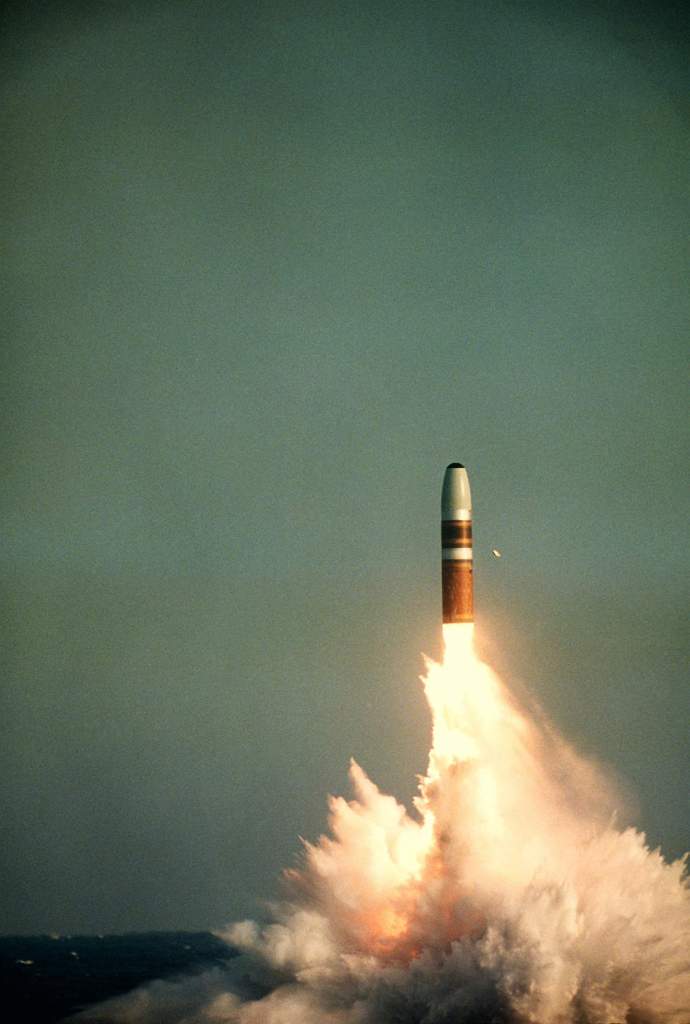 STIMSON received her SECOND Meritorious Unit Citation (MUC) for meritorious service during the period 25 April to 6 August 1988, for her participation in LANTCOOPEX 1-88, the first SSBN remote-site, rapid re-deployment, continuity of operations exercise.

STIMSON combined crews in May 1992 as a precursor to inactivation and was both decommissioned and stricken from the Naval Vessel Registry at Puget Sound Naval Shipyard on 5 May 1993. Henry L. Stimson went through the Navy’s Nuclear Powered Ship and Submarine Recycling Program in Bremerton, Washington, and ceased to exist on 12 August 1994.”

Henry Lewis Stimson, born in New York City 21 September 1867, graduated from Yale in 1888. After graduate work and law school at Harvard, he entered the law firm headed by Elihu Root in 1891 and two years later became a partner. In 1906 President Theodore Roosevelt appointed him U.S. Attorney for the Southern District of New York. Here he made a distinguished record prosecuting antitrust cases. After defeat as Republican candidate for governor of New York in 1910, Stimson was appointed Secretary of War in 1911. He continued the reorganization of the Army begun by Root, bringing it to high efficiency prior to its vast expansion in World War I.

Following the outbreak of war, he was a leader in the American effort to aid the stricken people of Belgium. After the United States became a belligerent, he served in France as an artillery officer reaching rank of Colonel in August 1918. His success in several important diplomatic assignments and as Governor-General of the Philippine Islands led to Stimson’s appointment as Secretary of State in 1929. His management of the Nation’s foreign affairs was highlighted by his strong opposition to Japanese occupation of Manchuria, the first aggressive step which led to World War II.

Returning to private life at the end of President Hoover’s administration Stimson was an outspoken advocate of strong opposition to Japanese aggression. In 1941 President Roosevelt returned him to his old post at the head of the War Department and he skillfully directed the tremendous expansion of the Army to the force of over 10,000.000 men which crushed Axis ground forces in Europe and the Pacific. 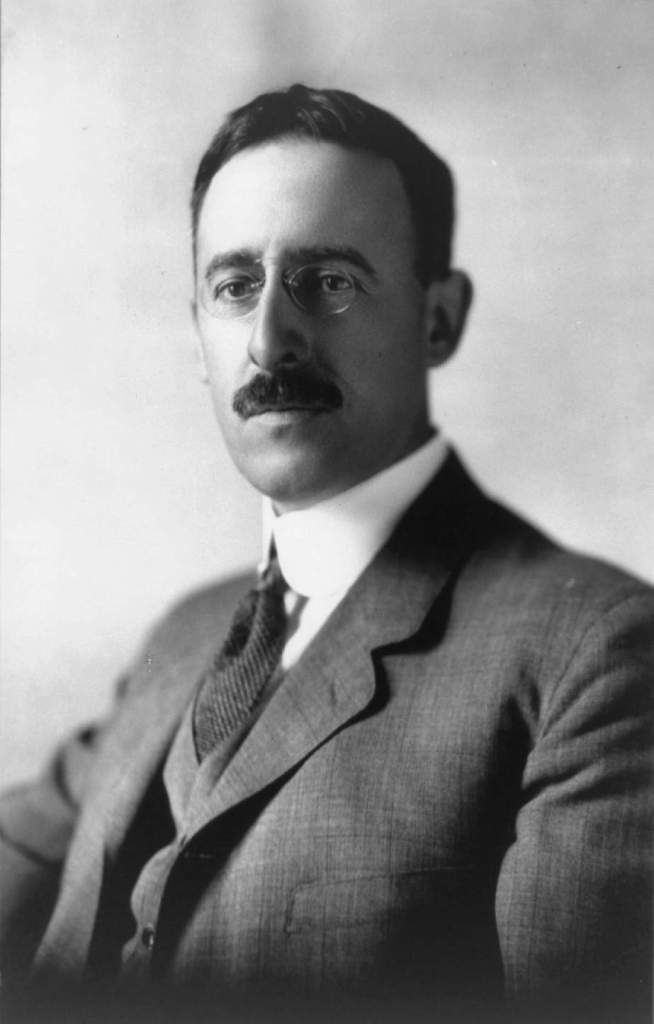 NAMED FOR Henry L. Stimson (1867—1950), a man of notable achievements both in his vocation, the private practice of the law, and in his avocation which was public service of the appointive kind.

Born in New York City, son of a distinguished surgeon, Stimson received his education at Andover, Yale, and Harvard Law School. He was only 25 when Elihu Root took him into partnership. The young lawyer learned much from association with this commanding ﬁgure in the legal profession of whom it was said that he had been connected with every important case in New York since 1880. Root, who became a lifelong friend and mentor, taught him not only a highly effective trial technique emphasizing painstaking preparation, close reason~ ing and ‘systematic ordering of arguments—intellectual habits that proved useful to Stimson in the varied positions he later ﬁlled with great distinction—but living and working in Root’s office, as he later remarked, also made him aware of “the importance of the active performance of his public duties by a citizen of New York.” Though his steadily expanding practice kept him busy Stimson found time to participate energetically in local and State politics, his chief interest being better government.

In 1906 Theodore Roosevelt appointed him to his ﬁrst public ofﬁce, that of US. Attorney for the Southern District of New York. Thereafter and until he ﬁnally retired in 1945 at 78, Stimson took frequent leave of absence from his lucrative private practice to assume public duties, serving under every President except Woodrow Wilson and Warren G. Harding. He was the ﬁrst to sit in the Cabinet of four Presidents (two Re publicans and two Democrats): as Secretary of War under William H. Taft, Franklin D. Roosevelt, and Harry S. Truman, and as Secretary of State under Herbert Hoover. He served Calvin Coolidge as adviser on Latin American affairs, peace maker in Nicaragua and Governor General of the Philippine Islands.

All his public ofﬁces, except one, were appointive and came to him unsought. Stimson had no ﬂair for politics of the elective kind. He lost his bid for Governor of New York in 1909. The only election he won was for delegate at large to the New York Constitutional Convention of 1915. There he worked tirelessly for reforms that would give the State a more honest and efﬁcient government. Although in that year’s election the voters rejected the revised constitution, by 1926 almost 80 percent of the proposed amendments had become part of New York’s fundamental law and 30 other States had followed suit.

Politically, Stimson was identiﬁed with the reform or progressive element in the Republican Party. His views on government were formed early in life and changed very little. They are set forth in the autobiographical book, On Active Service in Peace and War, written conjointly with McGeorge Bundy and published shortly before Stimson’s death at 83. “His basic convictions were two—ﬁrst that the primary and overriding requirement of all government was that it should not infringe the essential liberties of the individual, and second, that within this limitation government could and must be made a powerful instrument of positive action.” The restraint imposed by law on government in the interest of “the primary and essential liberties of the individual” was, to Stimson, “a fundamental principle of any decent society. But to construe this respect for personal freedom into an assertion that all government was evil seemed to him absurd.” He felt that “in the industrial civilization of the 20th century it was the duty of government to provide for the general welfare wherever no private agency could do the job.”

Given this point of view, Stimson could serve Theodore Roosevelt loyally as US. Attorney and Franklin D. Roosevelt equally loyally as Secretary of War. Under the Republican Roosevelt, his task was enforcement of Federal laws which had been enacted to protect our society against harmful actions of large and powerful private organizations; under the Democratic Roosevelt, his task was mobilization of the country’s industrial potential in support of a war we fought against powerful nations threatening our free society. He accomplished both tasks extremely well.” 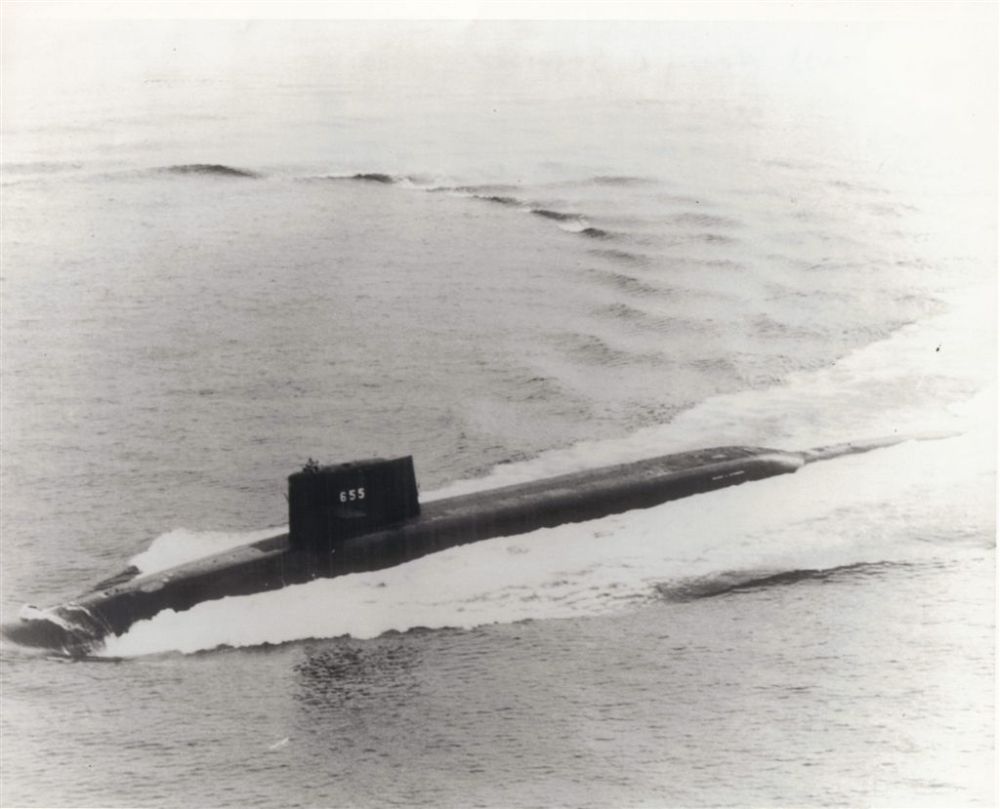 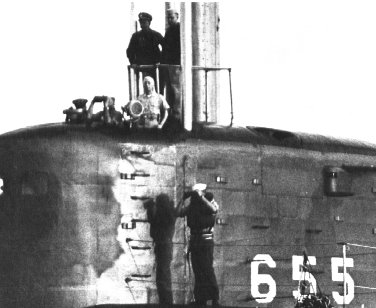 You can read more about the Stimson story here: http://ssbn655.org/

11 thoughts on “USS Henry L. Stimson SSBN 655 “to keep peace you must be strong to resist aggression””