You volunteered for submarines? Are you crazy?

The sacrifices made by American submariners in the Second World War are well documented. 52 boats lost. The Submarine Service represented only 1.6% of all Navy personnel during the war but they accounted for over 55% of all Japanese ships sunk, including one-third of the Imperial Japanese Navy. During World War II, the U.S. Navy’s submarine service suffered the highest casualty percentage of all the American armed forces, losing one in five submariners. Some 16,000 submariners served during the war, of whom 375 officers and 3131 enlisted men were killed.

We, who survived World War II and were privileged to rejoin our loved ones at home, salute those gallant officers and men of our submarines who lost their lives in that long struggle. We shall never forget that it was our submarines that held the lines against the enemy while our fleets replaced losses and repaired wounds.

As a comparison, the Germans lost 765 submarines during the war and the Japanese lost 201 boats. To their credit, they also accounted for a very large amount of damage to their enemy and had an impact on the wars prosecution well beyond their physical sizes.

Yet men continued to volunteer.

Despite this knowledge, men continue to this very day to volunteer to serve on submarines. Some call them the elite of the fleet while others kid them about being bubbleheads. Even in the shadows of the losses of World War 2, volunteers for submarines continued to arrive at the New London Submarine School. In the early 1950’s, the promise of submarines that would travel further and under greater stress once the new atomic power was mastered forced the Navy Medical leadership to examine every aspect of what it took to be a submariner.

Creating the Submariner Stereotype was only one part of the process. Another step taken was creating a Confidential Test that was supposed to add to the picture of what a good submariner would look like.

In the early 1950’s, this test was administered and revised several times to try and give interviewing officers a way to screen out potential candidates for submariner duty. There were three ways a man could be washed out.

The first was academic. The complicated machinery and processes of a submarine and the limited amount of men who could actually serve at any given time on board made it necessary to only accept those who exhibited superior skills. A man had to be able to think quickly, solve complex problems, and suspend his fear while doing so. All of those traits were well documented form the war patrol reports that were meticulously studied and analyzed.

The second qualification was the physical testing. Many men failed simply because they could not adapt to the pressures that submariner life present. The dive tower and the pressure tank weeded out a good percentage of men who were otherwise able to serve but would prove to be a burden if allowed to sail on boat a boat.

Finally, there was the mental component. Long periods in close quarters under the most demanding circumstances would certainly make someone with a personality issue vulnerable to a break down at just the wrong moment. Again, the limit to crew size made it clear that every single man would be needed at any given moment. There are no “riders” in a crew with the possible exception of temporary specialists that only serve certain special functions. And those are damn few.

So the Navy Submarine Medicine developed this confidential assessment that was given as a battery of tests. This was part of the process to screen potential submariners before they could set foot on their very first operational command. I remember being given a few tests when I was going through sub school over 46 years ago but frankly I could not tell you what was on the tests. I remember talking to a shrink too but again, I do not remember the interview very well other than he seemed very interested in my love life.

There was a book written about the American Submarine Losses by the Division of Naval History. In the forward, along with Admiral Nimitz’s comments about the sacrifices made were these thoughts:

The first practical submarine, like the aircraft, came with the developments of the advancing industrial revolution such as the internal combustion engine, powerful electric batteries, and improved genii of machines of many types. The submarine played its first important role in expanding naval power during World War I. For the United States it reached flood tide in World War II.

The new traditions submariners wrote, of valor, fortitude, service to America, shine for the future with the luster of Jones, Decatur, Farragut. In writing them, men suffered and died for America, as they did in all parts of the complex Navy, as they did in all services. Wars cannot be fought without loss; and he who wears the U. S. Navy’s uniform must be ready to give his life instantly in action as well as steadily in long years of service. To record the last great sacrifice of those who served under the sea, “SUBMARINE LOSSES, WORLD WAR II” was published soon after V-J Day.

Requests for this little memorial volume have mounted during the years while the last edition has been out of print. This reissue is an attempt to broaden and at the same time to sharpen the perspective of the original work by including in rough outline the scope of the enemy submarine effort and its frustration by the Allies. The resultant inescapable comparisons can only make more meaningful the tribute this book pays to the brave Americans of the Silent Service who were “loyal jusqu’ à mort” in 52 final patrols.

Extensive further research ought to be done before anyone speaks categorically on the fate of many an undersea raider. Until the deep gives up its dead, some mysteries will never be written off as anything better than “educated guesses.”

Office of the Chief of Naval Operations

For today’s assignment, I am including the Confidential Test. I will include the results on a separate post on August 1 along with the overall results from the earlier Submariner Stereotype document.

Knowing what I know now, I wonder how I would have done on either of these tests from the early 1950’s. 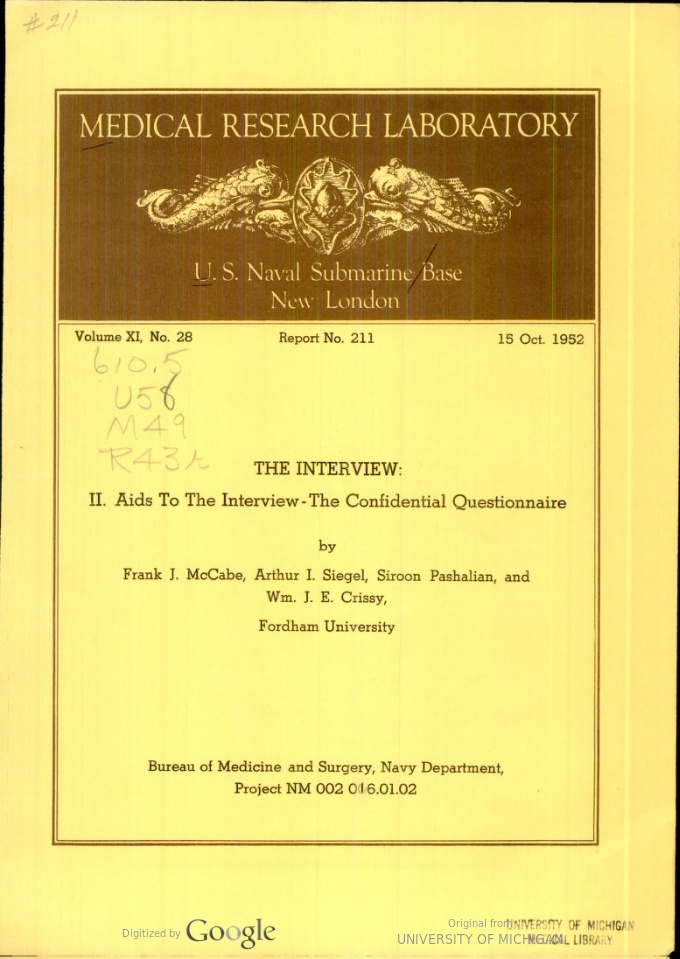 21 thoughts on “You volunteered for submarines? Are you crazy?”