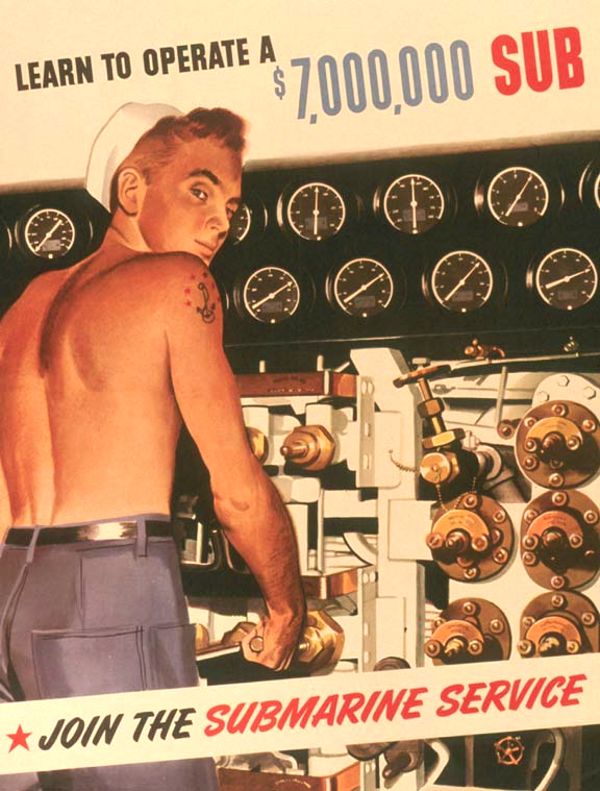 Imagine having this conversation with your nephew who had never been around the Navy.

He saw your uniform with the dolphins and heard you saying something about winning the Cold War.

This is how the conversation went:

“So you were on submarines. What did you do in the war Uncle Bob?”

“You mean you were on nuclear submarines that had all kinds of electronic stuff and exotic weapons and systems and your main job was keeping the air clean?”

“Well, that and some other stuff. But mainly I was an Air Regen Ranger. Some called us Auxiliarymen, some called us A-Gangers, and anything that wasn’t radioactive or filled with electrons probably fell under our watch. “

“Sounds kind of boring Uncle B.”

“Yep. But so is dying. If you want to live under the water in a steel tube that’s closed on both ends for months at a time, you need people like me. All that technology wasn’t worth much if everybody died from dirty air. “

“So did you have other important duties?” (Yawning in a disinterested way)

“A few. We were in charge of the shit tanks too. If you really want to see grown men cry, shut down those babies for a few hours. Especially after all that great submarine food.”

“And you did that job on purpose?”

“Yep. Proudest work of my life with some of the best men I have ever known.”

Okay, I might have made some of that up. But not the part about clean air being important.

That is real. Before I reported to my first submarine, I attended a school called Aux. Package Course in Charleston South Carolina. I had already been through Machinist Mate “A” school where I learned about boilers and main propulsion steam equipment (which I would never see again in my career) and submarine school where I learned about submarines I would never sail on. The next stop was to go to a sixteen week school to learn how to operate, maintain and repair a whole collection of submarine unique systems that helped the submarine operate under the water for months at a time.

One part of the school was the CO2 Scrubber course. We learned about what makes up our atmosphere and the dangers of too much CO2 and CO. It turns out that much of it was manmade and it could kill you if the levels got too high. We heard stories about World War 2 submarines that were forced to the surface because the old methods of absorbing the CO2 were so ineffective that the air almost became unbreathable.

The advent of nuclear power made it possible to stay submerged for long periods of time. No longer was a submarine tied to the surface where it needed to return to recharge the batteries. But inventing the reactor was slightly ahead of inventing new kinds of human beings. People are still going to breathe and with that simple action, we produce byproducts that can kill you in large quantities.

What I didn’t know in 1973 was how relatively new the technology was or where it came from. Frankly, I was just struggling at the time to figure out how to remember all the stuff they were trying to cram into my head in sixteen weeks. And frankly, there wasn’t a lot of leftover room from all the previous stuff they tried to stuff in there about boilers and main steam propulsion for a 600 PSI surface ship.

So this article was kind of interesting to me. It came from a 1962 Bureau of Ships journal v.11. article printed in the October edition.

New construction SSB(N)’s will soon be equipped with a flew type of carbon dioxide scrubber to remove CO, from the air. Mk II design and proto type construction was started late in 1959 with the objective of reducing noise while still retaining the capacity and cabinet size of the MK I scrubber. Prototype tests have recently been completed successfully. The noise signature of Mk II is within the structure borne limits for SSB(N)-616 class sub marines—this represents a reduction of 20 to 25 db broadband. In addition, the first ten production models of Mk II indicate that costs have been reduced about 35 percent. The reduction is attributed to constant awareness and implementation of value engineering principles.

Mare Island Naval Shipyard has been designing and building CO, scrubbers since shortly after World War II. The first assignment was to pioneer hard ware and systems capable of capturing CO2 in excess of a 3-percent concentration. The system, based on a chemistry cycle developed at the University of Pennsylvania, was intended for use in the USS Perch (APSS-313). The components of the first unit were scattered about the ship like a refrigeration plant, and the system could remove only 6 pounds of CO2 per hour in concentrations over 3 percent.

Scrubber design has since undergone a series of improvements. The unit was packaged and shock-mounted. Through various stages of refinement, capacities up to 18 pounds per hour were obtained. During this period, the permissible concentration limit in the submarine atmosphere was reduced 1.5 percent. Capacity increases were made possible by component improvements and higher flow rates. The chemistry cycle was changed to use mono ethanolamine (MEA) instead of diethanolamine (DEA). Then the useful life of the MEA solution was increased by adding the stabilizing element Versene FE-3 and eliminating hot spots in the re boiler. The chemistry cycle of the Mk I CO2 scrubber is described and illustrated in “Atmosphere Control in Submarines” in the May 1960 Journal. More than 100 (including new construction) Mk I units are now in use throughout the submarine fleet. The need to reduce the noise output of operating scrubbers led Mare Island to develop a noise reduction modification applicable to late model Mk I units. These changes required precision balance of rotating members, installation of quiet bearings and elimination of sound shorts. Provisions were made for isolation (sound mounting) of rotating equipment and installation of flexible hoses. A centrifugal blower is substituted for the type previously used. The modifications reduce noise by about 15 db. 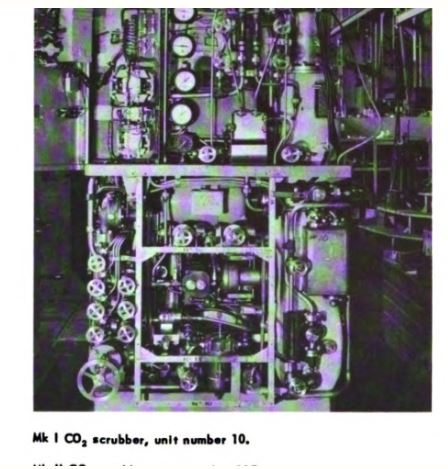 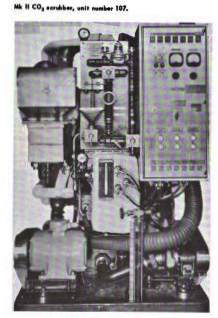 • The ship’s chilled water supply is used for cooling in lieu of the SW system of Mk I. The new method requires only about 2 percent of the ship’s total installed coolant capacity, and it eliminates SW heat exchangers and hull connections and simplifies piping.

• The acid cooling and wash system of Mk I has been eliminated by providing an air cooling coil and a resin filter bed in the air discharge.

• Cylindrical towers are used in lieu of the rectangular towers of Mk I to reduce manufacturing cost.

• Ready-to-install hardware, such as stock heater elements, is used to eliminate custom manufacture.

• Careful placement of components and piping arrangement and elimination of all unnecessary valves and equipment produces a unit which is open for ready access and ease of maintenance. The Mk II prototype has recently completed exhaustive performance and noise level tests. In addition, it was shock-tested at NEL, where all shock impulses were carried out without difficulty. After return to Mare Island, the tested unit was examined visually, tested hydrostatically, and lit off for capacity and noise checks. The unit showed only a 2db increase in noise level and no change in CO, removal capability. Plans for the Mk II unit have been widely distributed to submarine building activities, and instruction books will be distributed in the near future. Further information may be obtained from Mare Island Naval Shipyard or code 649, Bureau of Ships.

I went on to learn about scrubbers a few more times in FBMSTC Pearl Harbor and later in Bangor Washington when I attended the Trident Auxiliary Package course. Of course most of my real lessons were learned during refits rebuilding broken scrubbers and the untold hours I spent on a few of my boats in the atmosphere control watches I stood. I even learned that MEA or Amine as we called it had a horrific smell and was really amazing for shining brass before big inspections.

Don’t hate. I wasn’t even twenty one when I found that last part out and my First Class taught it to me. 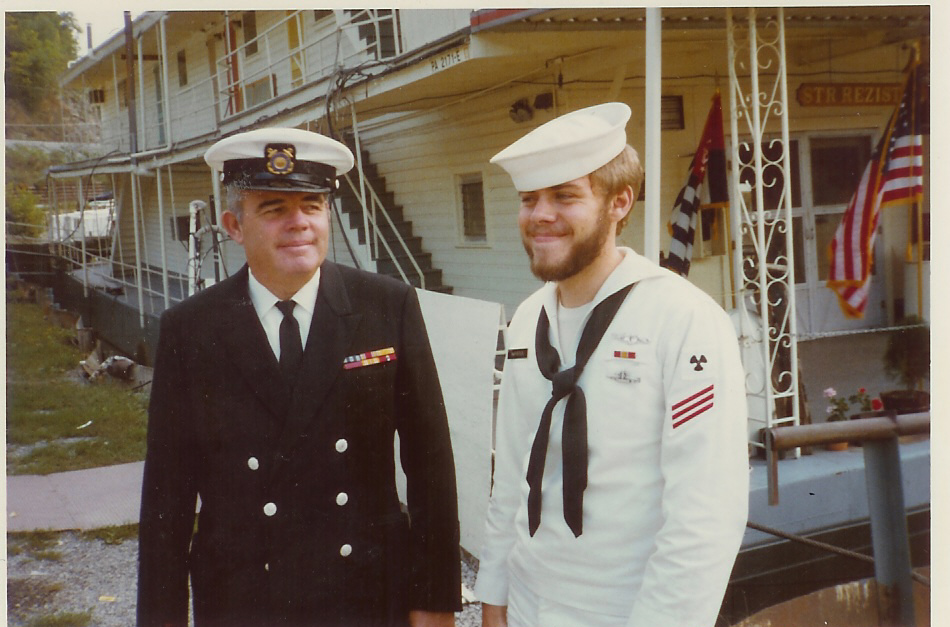