When the Japanese attacked Pearl Harbor, the great surface fleet that was the mainstay of America’s naval arm was badly battered. Laying in the mud and waters of Pearl Harbor, these great ships were suddenly ejected from the immediate battle plan and a new strategy needed to be adopted quickly. America would eventually rebuild and replace all of her losses at Pearl, but one weapon remained uninhibited: the US Navy Submarine Force. Having Admiral Chester Nimitz as their new Pacific Fleet Commander meant that all of the years of training and drilling on those boats would now be brought to fruition,

Prior to the war beginning, America had already begun a crash building program for submarines. Those submarines included some of the best technology of the day. More capable than their predecessors, these hunters were about to be unleashed on the Japanese Navy in ways that were not originally planned for.

One of those submarines was the USS Bowfin. Orders were given to begin her construction and on December 15th 1941 (just days after Pearl Harbor) direction was given to commence building submarines of a new class. The Portsmouth Navy Yard was given the order to start construction on the new class of submarines known as the Balao class fleet submarines. The third boat of the class was to bear the name USS Bowfin (SS-287). Her keel was laid on 23 July 1942.

From the ship’s beginning to completion, construction went very smoothly. She was launched on December the 7th 1942 exactly one year after the attack at Pearl Harbor. The ship’s history records that she would be known as the “Pearl Harbor Avenger” in hopes that she would be a major role in gaining revenge against the Japanese. Her war record shows that she did an amazing job.

This article contains the report from just one of her Patrols, Number 5, which was remembered as the Tough Luck Patrol. Bowfin completed nine patrols before the war ended and had many great feats attributed to the brave men who sailed her. Her tonnage placed her in the top ranks of American hunter killers and included a crane and a bus. But Patrol 5 was a significant patrol not for what she missed but for what the future would bring to the submarine force.

During this patrol, the submarine was an example of the very best technology, weapons, leadership and steadfast crew that the Navy had to offer. By 1944, the Japanese Navy and merchant fleets had already been shrunk by the prowess of the men who sailed on submarines, surface ships and aircraft that flew from the decks of an ever increasing fleet. This was not an unsuccessful patrol according to the official records but it highlighted the ongoing weaknesses that would need to be overcome if the submarine force was ever to be completely successful. 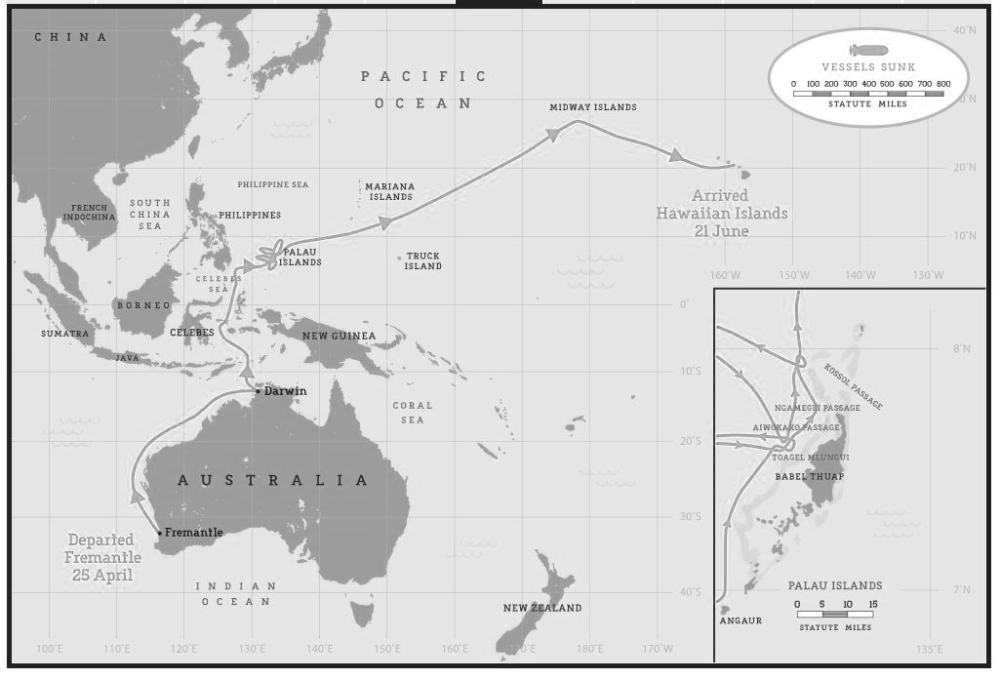 The Patrol started on the 25th of April with a departure from Fremantle Australia.

Fremantle was one of our submarine bases that was placed well out of the normal reach of the Japanese Navy. As the Japanese had rapidly expanded early in the war all across and down into the Pacific. Safe havens were required to allow the boats to refit and rearm between patrols.

But the distance from Freemantle to the war zone consumed precious fuel and supplies. The four thousand mile journey to the patrol areas near Palau was a time consuming trip as well. Every mile put wear and tear on the boat’s main propulsion engines. Every dive and surface added strain to the hull and equipment. Even though submariners were well trained and all volunteers, fatigue and stress were also factors in these long runs to the combat areas. The total run would end up being over 15,000 miles by the time the boat pulled into Pearl Harbor on the other end of the Pacific.

These pages come from the official Navy after action report. From May 30 – June 2. I have tried to be as faithful as possible in transcribing the pages. But they are a key to understanding the strengths and weaknesses of the submarines of the day. 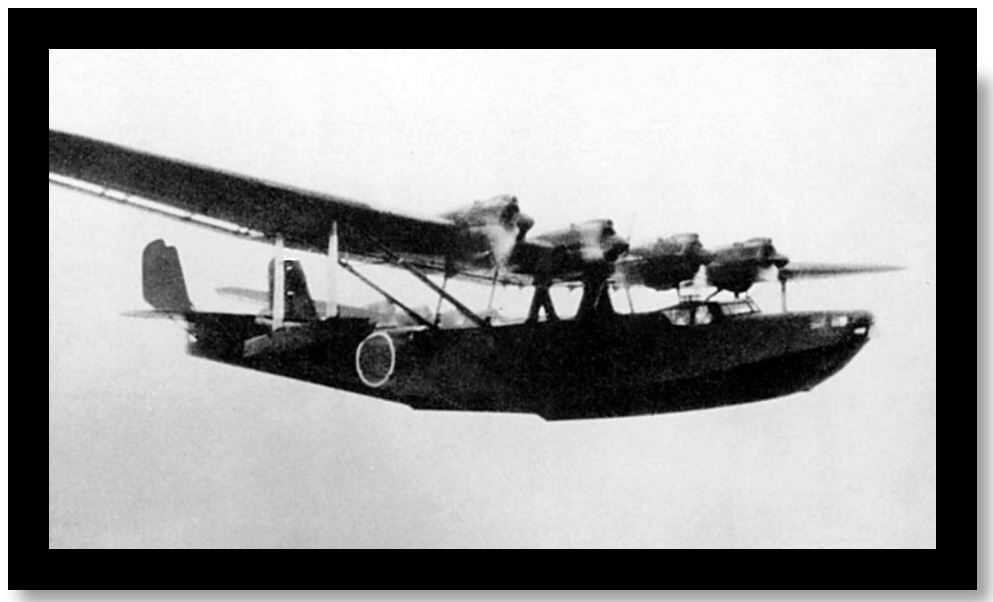 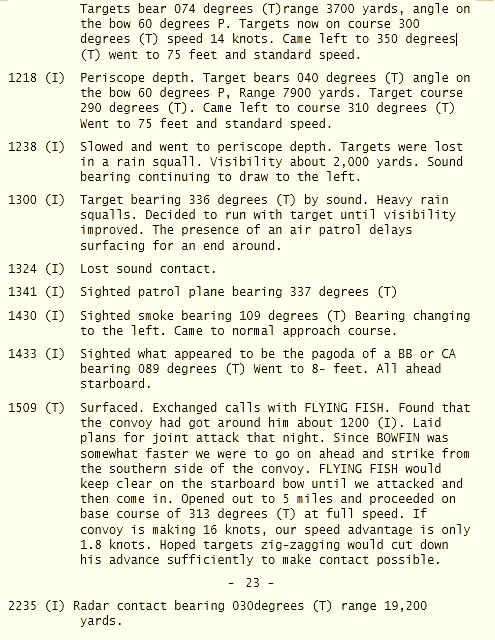 The Bowfin would go on to many more successful missions.

Her last ended on July 4th 1945 in Pearl Harbor. The war came to an end just a few short months later and she was placed in reserve.

From the Museum History Page:

“USS Bowfin is fortunate not to have ended up as scrap metal or as target practice and Bowfin is one of only fifteen U.S. WWII submarines that survived this fate. Today, USS Bowfin Submarine Museum & Park, is a reality; her story and the story of the U.S. Submarine Force, past and present, will be able to live on thanks to the hard work and dedication of individuals from both the military and the civilian communities.

In early 1972, World War II submariner and Pearl Harbor survivor ADM Bernard A. “Chick” Clarey and RADM Paul L. Lacy approached the Secretary of the Navy about acquiring Bowfin as a memorial to the U.S. Submarine Force at Pearl Harbor.

With the assistance of Hawai’i Senator Daniel Inouye, the acquisition was secured. Bowfin was towed to Pearl Harbor’s Naval Inactive Ships Maintenance Facility from Seattle, WA.

In December 1980, Bowfin was moved to her present day location at Pearl Harbor, adjacent to the World War II Valor in the Pacific National Monument. This is a fitting location for the submarine that had been launched a year after the attack on Pearl Harbor and nicknamed “The Pearl Harbor Avenger.” Bowfin became the centerpiece of the new area around her that became known as USS Bowfin Submarine Museum & Park.

On 1 April 1981, Bowfin officially began her new career as a museum ship, and welcomed her first visitors on board. By 1985, over one million visitors had walked her decks, learning about what life was like for the submariners of WWII. In 1986, Bowfin was named a National Historic Landmark by the U.S. Department of the Interior.” 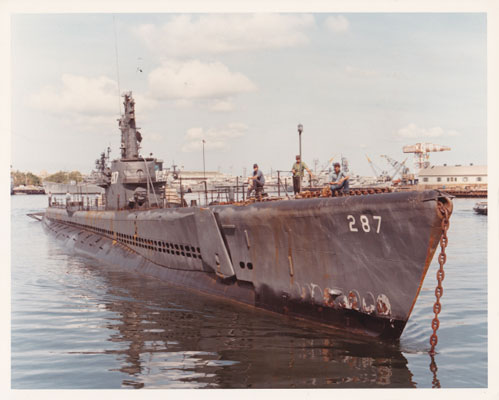 My own history with Bowfin was both indirect and direct.

When she was first requested as a museum ship in 1972, I was beginning my career in the submarine service. I was in Pearl Harbor when she was rescued from the scrap heap and took advantage of her setting for my second reenlistment. Seven and a half years later, I would use the new Museum and Park as well as the boat for my Commissioning as a Chief Warrant Officer. I could not have chosen a more appropriate place to take that oath and celebrate what the Navy had allowed me to achieve.

But the lessons learned from ships like the Bowfin and others during the Second World War were the key drivers behind the submarine force envisioned for the future. Despite the amazing work done by the US submarine force, improvements that were not yet in existence were needed. All of the threats to the force were evident in the struggle the skipper had in fighting his boat.

The distance that needed to be traveled was a direct result of the security situation at the time and that distance marginalized the boat’s fuel efficiency. Despite the final assessment that another run around the convoy may have resulted in a better outcome, the skipper made the call to conserve his fuel for a return to port in Midway.

The convoy itself proved more than enough of an inhibiter just as it did for the Allies in the Atlantic. The presence of escorts made any direct attack costly and maybe even deadly. Air power in the form of long range aircraft added another layer to the threat factor. The boats travelled faster on top of the water for sustained periods of time but that increased their vulnerability.

And finally, the limits on technology not only affected being able to stay submerged for longer periods of time, but basic communications between boats was challenging. When you factor in the weather conditions and atmosphere control issues inside the boats on extended stays below the surface, you have a lot of negatives to overcome.

Nautilus and the following boats chipped away at every one of those weaknesses. The ability to stay submerged for extended periods of time changed the entire operating parameters. Advances in all areas of technology were added over the next decade so that by the time the deep diving fast attacks came along, submarining graduated to an entirely different world. Never again would a submarine commander have to abandon the hunt because of a concern about fuel. With the advancement in hull designs and power available, the ability of the convoy to maneuver away would be neutralized. New weapons platforms that were created to match the denizens of the deep suddenly made every ship both above and below the surface a vulnerable target.

I hold the men who sailed on the boats of the Second World War in the highest esteem. They overcame tremendous odds and achieved remarkable results. Many say that their work was one of the key factors to ending the war with Japan. But the advent of nuclear power and modern, fast moving boats that glide through the depths of the ocean also stand alone as significant in the history of modern warfare. If there was a time machine, I am willing to bet that any skipper of one of the fleet boats would have given his soul to be able to have all that technology at their fingertips.

Thank you to the staff at the Bowfin Museum for helping me with the deck log. In researching this article, I found that most online versions were missing page 22 which became evident as I was researching. You are only reading this today because one of their staff was kind enough to find the missing page.

They tell me the museum and boat are more impressive now than ever before. I hope to be able to come back one more time before I can no longer travel. Every part of my Navy life is represented there in one way or another. I will always be grateful to those who preserved the Bowfin and keep the museum growing.

and now for a little more flavor… 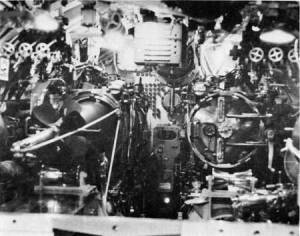 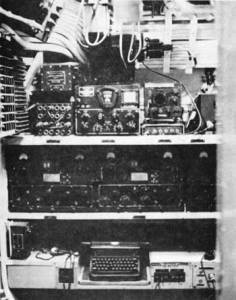 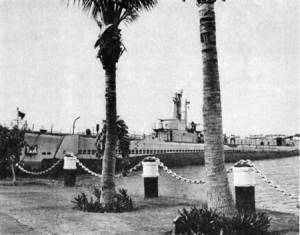