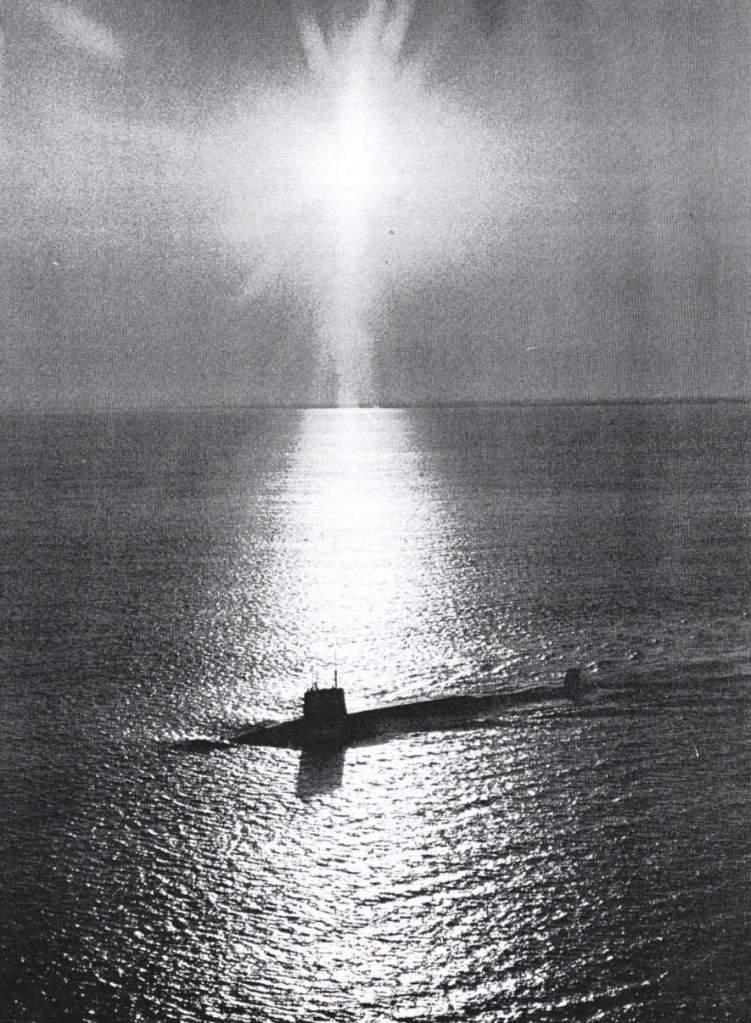 The James Monroe was built in the early days of the Polaris program and typified the boats that were launched during that time. With each successive weapons upgrade, she would be retrofitted with more powerful weapons and equipment to support her primary mission: deterrence.

A little over ten years after she was commissioned, Admiral Rickover gave a report to the Congressional Atomic Energy Commission about the state of not just the Monroe but all of the nuclear ships in the Navy’s arsenal. I have included a link to the full report at the end of this article. It is fascinating to see the struggles that the Navy was going through in such an immensely historic time.

The 1973 Arab Israeli conflict had just occurred and America was doing its best to extricate itself from South East Asia. Forces at home were trying to limit military growth at the exact same time the Soviets were expanding their submarine fleet at a rapid pace. The oil crisis challenged all of the Navy and Defense Departments short and long range plans. But ships like the Monroe continued to sail the seas providing the President with a very real threat to anyone who attacked us directly.

This is part of her story. 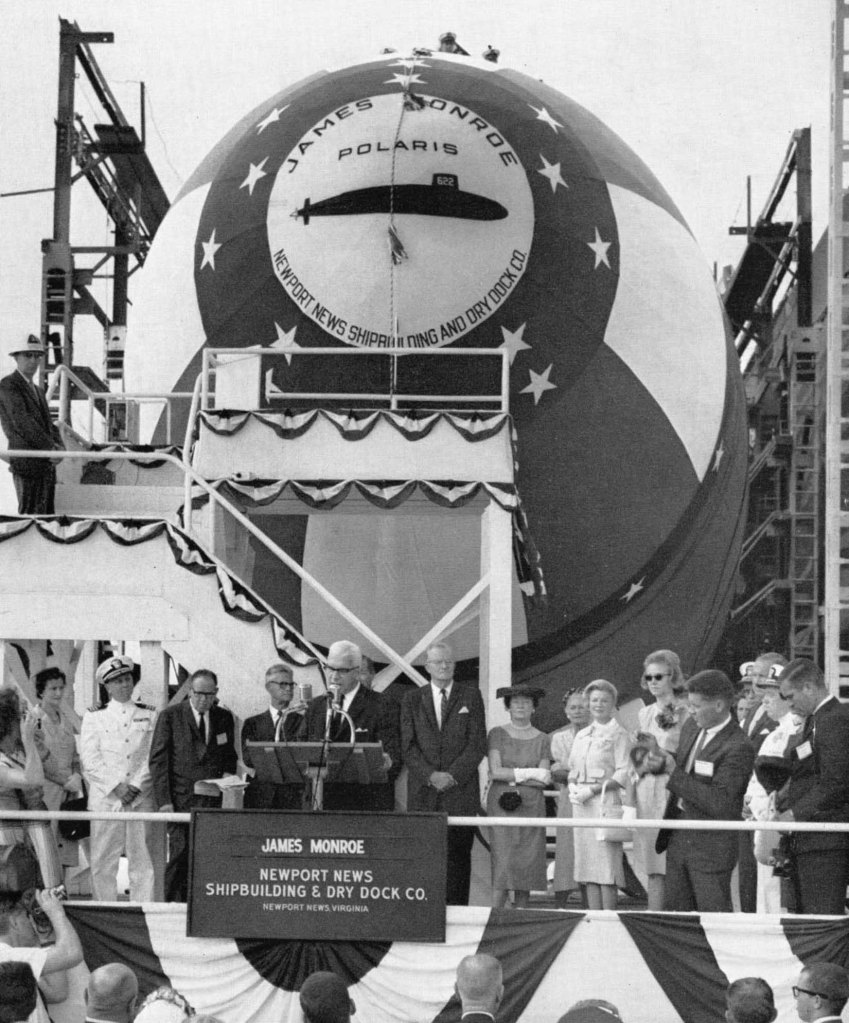 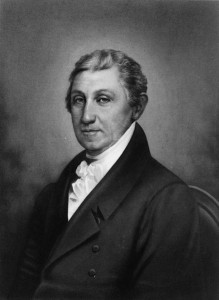 Born in Westmoreland County, Va., 28 April 1758, James Monroe interrupted his education at William and Mary College in 1776 to join the Continental Army. He saw extensive action during the Revolutionary War receiving a wound at the battle of Trenton. In 1780 he began the study of law under Thomas Jefferson, then governor of Virginia, and 2 years later was elected to the Virginia House of Delegates to begin a legislative career which took him to the Confederation Congress and the United States Senate,

He served the executive branch as Minister to France, Spain, and Great Britain. He joined Robert R. Livingston in negotiations with the French government leading to the Louisiana Purchase. President Madison appointed him Secretary of State in 1811 and added the War Department portfolio to his duties during the closing months of the War of 1812.

Elected fifth President of the United States in 1816, Monroe led the country during a period remembered as “The Era of Good Feeling.” His administration witnessed the settlement of several long standing disputes with Great Britain, the acquisition of Florida, the Missouri Compromise, and the promulgation of the Monroe Doctrine.

At the end of his second term Monroe retired to his estate, “Oak Hill” and died 4 July 1831 while on a visit to New York.

Following shakedown off Cape Kennedy, Fla., James Monroe spent the early months of 1964 in ballistic missile tests. She departed for her first patrol in June 1964, emphasizing the expanded peacekeeping role of Polaris submarines.

It is fitting that a submarine named for President Monroe belong to a modern United States peacekeeping force since his famous Monroe Doctrine is one of the cornerstones of American freedom. “The American continents…” he warned, “are henceforth not to be considered as subjects for future colonization by any European power.”

During the subsequent years James Monroe continued her patrols and stands ready as a powerful deterrent against Communist aggression.

On 17 January 1967 James Monroe completed her 12th deterrent patrol. She has operated from both of the European Polaris replenishment anchorages, maintaining her creed and motto of “Watchful Waiting.” Her ability to remain on patrol station is limited only by the amount of food carried and the mental and physical endurance of her crew.

The USS James Monroe (SSBN-622) on 9 January 1968 became the first submarine with POLARIS A2’s to enter overhaul and to receive POLARIS A3 capability.

On February 26, 1974, Admiral Rickover delivered this testimony to the Joint Congressional Committee on Atomic Energy. The Arab Oil Embargo was still being felt that was crippling the world’s economy as well as the ships that were highly dependent on foreign oil. Remarkably, just five years before that time, the Department of Defense had recommended the suspension of new construction of all nuclear ships and submarines as a cost saving measure. Only the force of congress prevented this form taking place. The results could have been devastating.

The reactors of the nuclear-powered frigate South Carolina will be ready for initial operation this summer with ship delivery scheduled for December this year. The keel of the Virginia was laid in August 1972, the keel was laid for the Texas this past summer and construction has started on the third ship of the Virginia class, the yet unnamed DLGN-40. These nuclear frigates will have reactor cores which will provide at least 10 years of normal operation before refueling is required.

Funds for construction of DLGN-41 and additional long-lead funds for DLGN-42 are included in the fiscal year 1975 shipbuilding budget request.

Four of the five operational nuclear-powered surface ships have seen action in Southeast Asia. The nuclear-powered aircraft carrier Enterprise has steamed over one-half million miles since her commissioning in 1961 and has completed six deployments to Southeast Asia. New design long-life cores were installed in 1970 during Enterprise’s second overhaul. They are expected to provide enough energy to operate for more than 10 years which represents about a fourfold increase in core life over the original Enterprise cores. From both a military and a cost standpoint that is an important advance.

The cumulative distance steamed by all of our nuclear-powered ships has surpassed 25 million miles, including 2,087,000 miles steamed by the five nuclear-powered surface ships. Our fleet of Polaris/Poseidon nuclear-powered submarines has completed over 1,170 patrols which amount to 70,700 days of submerged operation or over 190 years underwater. The naval nuclear propulsion program has 126 atomic reactors in operation, which represent an accumulated total of over 1,150 years of operational experience. This includes reactors in prototypes and multiple reactors in the surface ships. This is why you get a greater number of reactors than we have numbers of ships.

With the exception of a few of our oldest submarines, all cores being installed in submarines today, whether in new ones or those coming in for overhaul, are of the long-life type. These are capable of propelling a submarine for over 400,000 miles instead of the 62,000 miles provided by the first core of the Nautilus. This sixfold increase has been achieved because we have continued to stress heavily advanced reactor development work. I might add that the cost of these new long-life cores is less than the earlier types. Our goal is to develop nuclear cores that will last the life of the ship. We are already working on some that have several years longer life than the 13-year cores we are putting into the carriers.

Funds for the Trident program, including authorization and construction money needed to build the second and third Trident submarines, are included in the fiscal year 1975 budget. The Trident submarine and missiles are needed to increase the survivability of our sea-based deterrent in the 1980’s and beyond, and to provide for replacement of our aging Polaris/Poseidon submarines.

I am amazed each time I discover a new source of information from the records about the life we lived as submariners. I am even more amazed about how the entire submarine program came to exist and what it took for that to happen. I thank God for Admiral Rickover’s tenacity and courage to never accept defeat.

This is the link to the web site the crew maintains. It’s a pretty awesome site and shows the love and dedication her crew have for their old ship.