Every American Bluejacket from the early 1900’s to today receives a copy of the Bluejacket’s Manual.

The books were written to help supplement the knowledge of men who were being brought into the Navy. Many times, they lacked even a high school education although over the last century that has been less and less. Newer technology dictates that most sailors have the ability to read, write and perform basic mathematical calculations. The first volume was written in 1902 and as the Navy grew technologically, so did the book.

I have been collecting various editions over the years but they seem to be getting harder and harder to find.

One of my favorites is the Eleventh Edition from 1943. 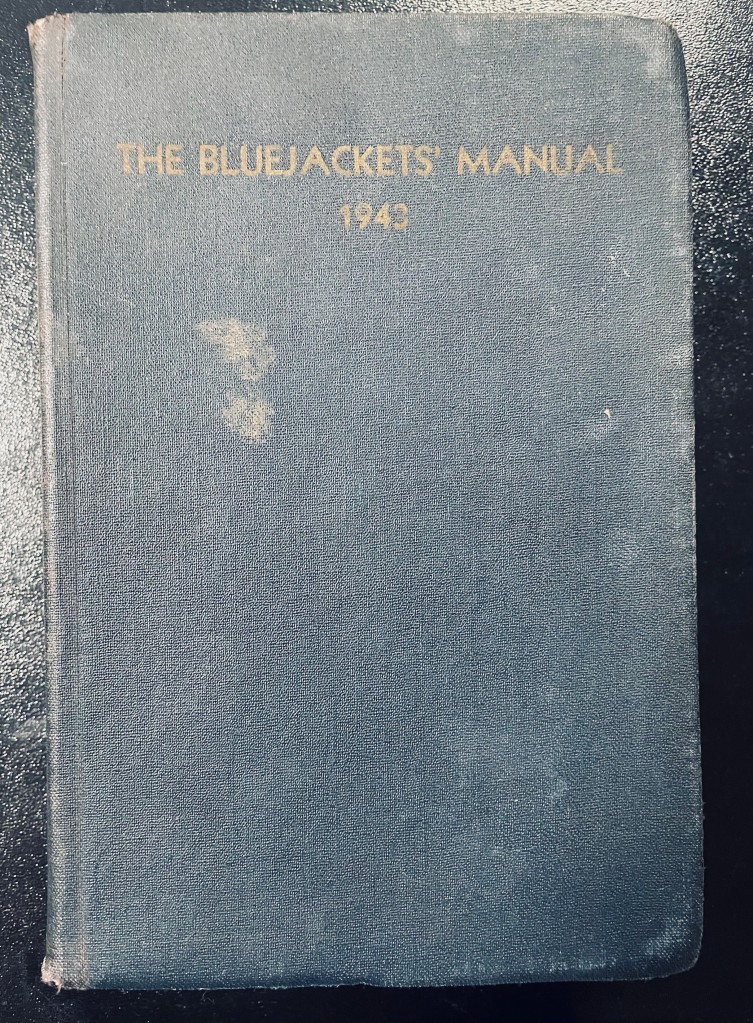 The war had been going on for over a year by the time this one was released and I am pretty certain it would have been very similar to the one my Dad was issued. 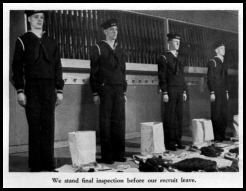 This wartime issue was illustrated and it is obvious that the Navy was in a transition phase from its sleepy pre-war battleship mentality to the phase where it realized that fighting a war at sea had fundamentally changed. The old rules were no longer applicable and the days of two heavy behemoths slugging it our were already drawing to a close. The advent of airpower and the stealth of the submarine force forced tacticians to go back to the drawing board and re-assess what had previously been gospel.

In the 1940 edition, actual pictures of warships were included for identification: 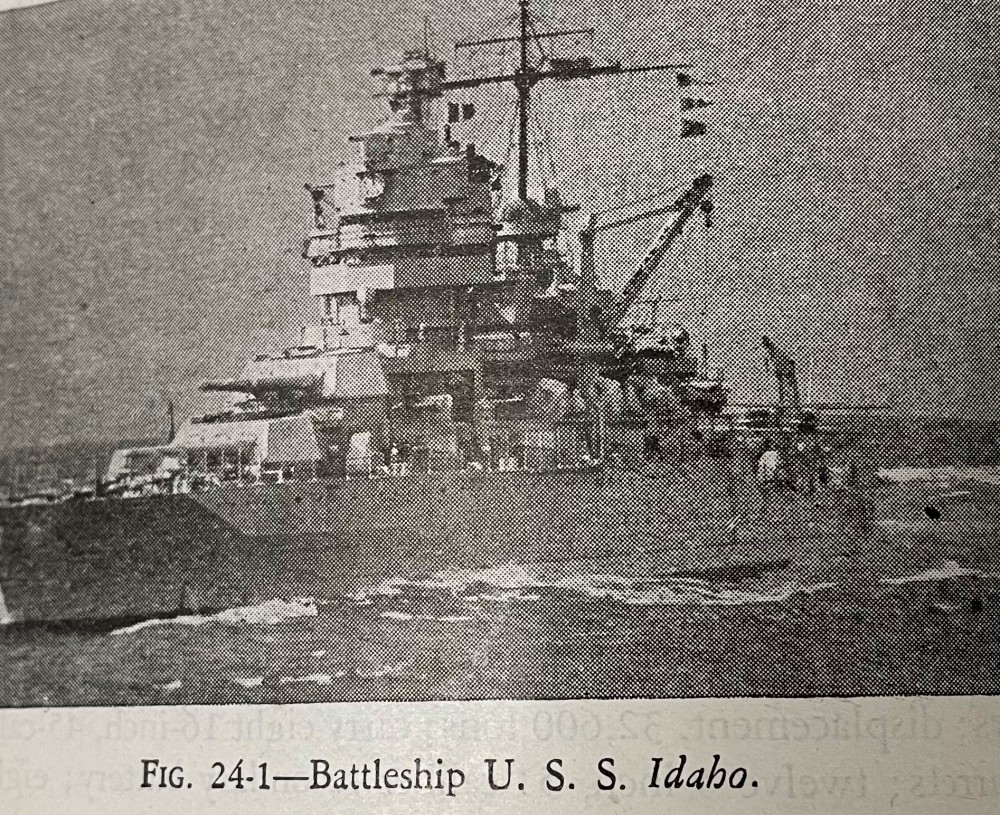 But in the 1943 Edition, line drawings were substituted:

Just as in any weapons system, the person behind the weapon would play an instrumental role in its success. Leaders who understand how to operate the systems were critical. But followers were even more important. You needed to have men who could be trusted to do what they said they did.

Submarining had been around since 1900 in one form or another in the US Fleet. Special training in New London had evolved for the fledgling non-qual and the rapid growth after the Japanese attack required men to volunteer. Imagine if you were a boy from rural Kansas who had never been to sea before and you volunteered for duty on one of these boats. For those of us who served on any boat or ship, that first visit can be a real shock. The smells, the close quarters, the lack of a real place to sleep. In New London, you probably found out how cold cold was. In the South Pacific, you found out how hot hot was. The boats were designed for killing, not comfort.

That Bluejackets Manual you were issued in Boot Camp curiously seemed to skip a lot of details. Chapter 41 starts on page 1132 (one of the longest BJM’s in my collection by the way).

“The modern type submarines, which are named after fishes, are about 310 feet in length, displace 1,500 tons when on the surface, and carry a crew of 5 officers and 55 men. They are equipped with torpedo tubes in both the bow and stern and mount a 3” gun which may be used against either surface targets or aircraft. Their maximum speed on the surface is about 21 knots, using Diesel engine electric drive, and about 8 knots submerged, using storage batteries and motors.”

When you first look at that description, it doesn’t seem so bad. Even a boy from Kansas knows that 310 feet is about as long as a football field. Heck, you could practically get lost in that much space. I would love to see the look on some of the boys faces when someone showed them that you have to subtract ballast tanks, torpedoes, food, and somehow still have to have room for diesel fuel. That 310 feet of space become pretty small pretty quickly.

But what about the money?

This was an actual attraction for the volunteers.

“Enlisted men assigned to duty aboard receive pay in addition to the pay and allowances of their rating and service as follows:

a) When regularly attached to submarines in commissioned based on shore submarine bases:

(3) Chief Petty Officers and First Class after one year from qualification, $25.00 per month

Holy cow, that’s a lot of money! Well, it actually was back in 1943. The rest of the article goes on to talk in glowing terms about the highly technical nature of the boats. Each man might be eligible for valuable technical training and electrically operated equipment. The final lines talk about the diesels being used that is fast becoming “very common in the merchant marine service and at many shore installations.”

By now the boot has to be pretty excited. Extra money, state of the art equipment, travel and adventure. who could ask for anything more?

What the BJM fails to talk about is the danger and sacrifices these boys are about to make. It says nothing about depth charge attacks, seasickness, crowded and foul smelling quarters, and long days and nights at sea dodging one enemy in order to sink another. In 1943 alone, we lost 17 boats. No amount of extra pay could ultimately wash away that sacrifice.

The loss of the Amberjack is indicative of that sacrifice, From Wikipedia:

“The last radio transmission received from Amberjack was made on 14 February. She related having been forced down the night before by two destroyers, and that she had recovered from the water and taken prisoner an enemy aviator on 13 February. She was ordered north of latitude 6°30’S, and told to keep hunting for Rabaul traffic.

All further messages to Amberjack remained unanswered, and when, by 10 March, she had failed to make her routine report estimating the time of her arrival at base, she was ordered to do so. No reply was received, and she was reported as presumed lost on 22 March 1943.

Reports received from the enemy after the war record an attack which probably sank Amberjack. On 16 February 1943, Hiyodori and Sub Chaser Number 18 attacked a U.S. submarine with nine depth charges at about 5°05′S 152°37′E Coordinates: 5°05′S 152°37′E. An escorting patrol plane had previously attacked the submarine. A large amount of heavy oil and “parts of the hull” came to the surface. This attack is believed to have sunk Amberjack. However, no final conclusions can be drawn, since Grampus was lost in the same area at about the same time. From the evidence available, it is considered most likely that the attack of 16 February sank Amberjack, but if she did survive this attack, any one of the attacks and sightings thought to have been made on Grampus might have been made on Amberjack.”

One particular sacrifice from her last patrol left a lasting legacy for any submarine sailor ever stationed in Pearl Harbor after her loss. The Submarine Enlisted Men’s Recreation Center was named after Chief Pharmacist’s Mate Arthur C. Beeman, who was killed in the gun battle of 4 February 1943.

The men of the submarine force in World War 2 will always stand as giants as far as I am concerned. They earned every cent of every dollar. But as we all know, it wasn’t about the money after all. It was a grand display of courage in the face of real danger. We can never repay them enough.