The weather is getting warmer so writing will be more challenging for a while. As I look at the world situation, I can’t help but think that not much has changed in a hundred years. Today’s story from the archives is about Sea Power, Great ships, Great men and the thread that connects them all together.

The year is 1921 and the nation is grappling with the need to maintain a strong Navy and those who would disarm for the sake of world peace. The First World War was still fresh in everyone’s minds and the expense of building a strong Navy was certainly being debated. The disarmament conferences were already underway around the world and the Navy was being scrutinized. The new Assistant Secretary of the Navy (who ironically was a highly decorated Army officer like his father) was very vocal about making sure the country would not get caught off guard. The first section is from a newspaper article from March 23, 1921: 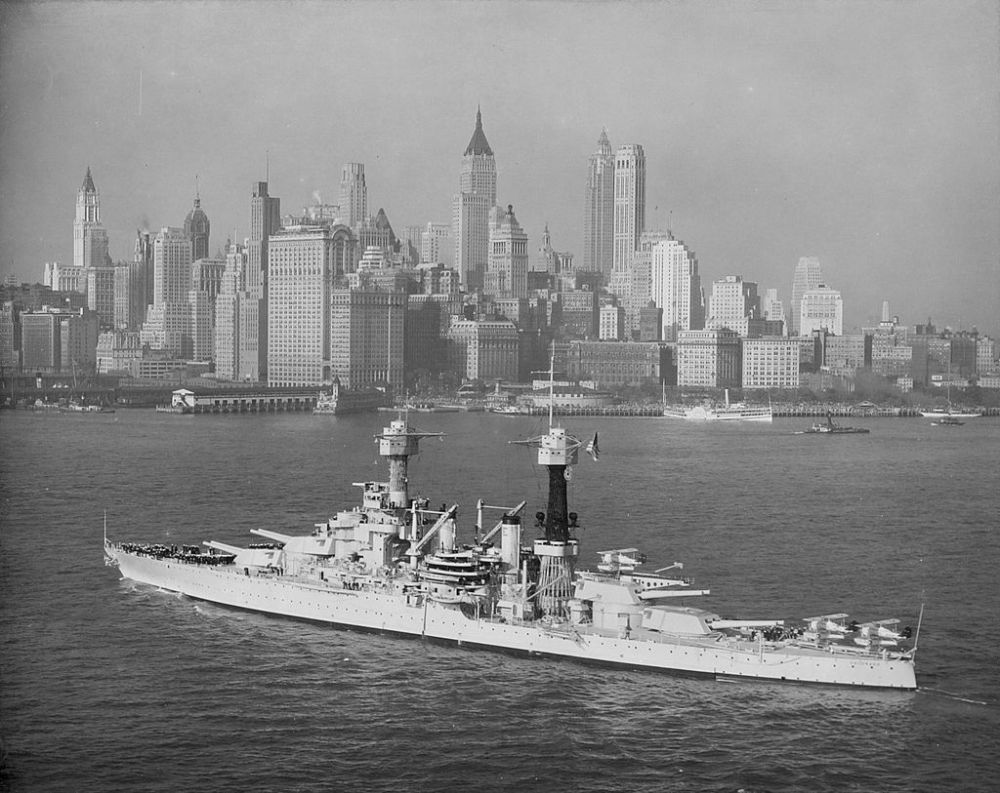 NEED OF GREATER NAVY FOR NATION

“We are facing a critical period in our history, “Roosevelt said in an address at a luncheon, in connection with the launching of the new dreadnaught Colorado.

“The average citizen is not aware of the dangers that confront America. There are even those who are taking a stand against our navy and they are sincere pacifists. There are those opposed to a bigger Navy and they are fools. Both are in the same class.”

Christened with a flask of carbonated water from Colorado Springs, the Colorado was launched at the yards of the New York Shipbuilding Company while 20,000 persons cheered.

There was an ear-splitting rain of whistles and sirens as the mighty hull of the fighting ship slid into the water. Ten tugs, hawsers attached to the warship, checked its momentum, tossed like ships in the back wash.

Mrs. Ruth Nicholson Melville, daughter of Samuel D. Nicholson, swung the bottle of water against the bow of the great ship as it started slowly sliding down the ways. Among those who witnesses the launching were Gov. Shoup, of Colorado: Assistant Secretary of the Navy Roosevelt; Representative Patterson, of New Jersey, and Representative Kelly, of Michigan.

The shipyards, vessels lying in the stream, and adjacent buildings were decorated with bunting in honor of the event. As the newest of Uncle Sam’s fighters slid into the water, the great crowd looked like a mass of fluttering flags, hats and handkerchiefs, and the first roar of human voices was quickly drowned In the bedlam of foghorns and steam whistles.

The Colorado is 624 feet long with a displacement of 33,600 tons. She will be equipped with eight 16 inch guns. Her motive power is to be furnished by four electric motors of 7,000 horsepower each, and four propellers, each 13 ½ feet in diameter. 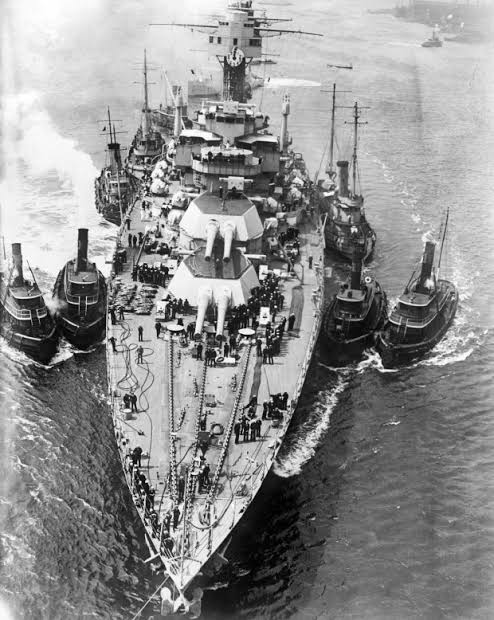 So who was this Assistant Secretary of the Navy?

Theodore Roosevelt III (September 13, 1887 – July 12, 1944), known as Theodore Roosevelt Jr., was an American government, business, and military leader. He was the eldest son of President Theodore Roosevelt and First Lady Edith Roosevelt. Roosevelt is known for his World War II service, including the directing of troops at Utah Beach during the Normandy landings, for which he received the Medal of Honor. He dies a month after the D Day landings at the age of 56.

More about the USS Colorado BB 45 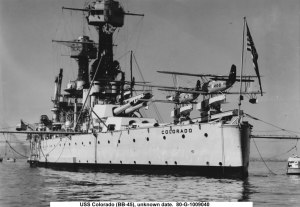 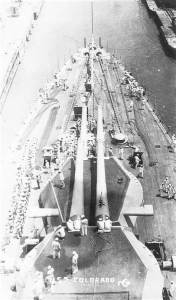 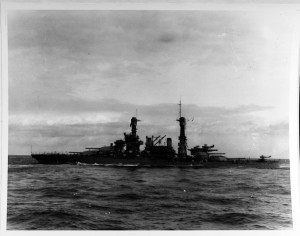 Theodore Roosevelt Jr. was correct about the coming dangers in the Pacific

USS Colorado, a 32,600-ton battleship built at Camden, New Jersey, was commissioned in August 1923. She made an initial cruise to European waters in late 1923 and early 1924, then transferred to the Pacific, where she spent most of the remainder of her active career. Prior to World War II, Colorado served with the Battle Fleet, taking part in exercises and training. Among other peacetime operations, she took part in the fleet’s 1925 trans-Pacific voyage to Australia and New Zealand, and helped in the search for missing aviator Amelia Earhart in 1937.

Colorado was undergoing overhaul at the Puget Sound Navy Yard when Japan’s attack on Pearl Harbor opened the Pacific War.

She was stationed on the U.S. West Coast during March-August 1942, then steamed west to Pearl Harbor. From November 1942 into September 1943, she was one of the older battleships deployed to the South Pacific to guard against possible Japanese offensive actions in that area. In November 1943, Colorado took part in the Tarawa invasion. She supported the landings at Kwajalein and Eniwetok in January and February 1944 and the Marianas operation in June and July. On 24 July 1944, while bombarding Tinian, she was hit by enemy shore batteries, suffering serious casualties among exposed personnel topside.

Colorado’s next combat duty was off Leyte in November 1944, where she was hit by two “Kamikaze” suicide planes late in the month. Remaining in the combat zone, she supported the Mindoro invasion in December and the Lingayen Gulf landings in January. During March, April and May 1945, Colorado’s sixteen-inch guns bombarded Okinawa in support of U.S. troops ashore. In August and September 1945, she covered the occupation of Japan, then departed for the United States. Following transport service in late 1945, she was inactivated. USS Colorado was decommissioned in January 1947. After more than twelve years in “mothballs”, she was sold for scrapping in July 1959. 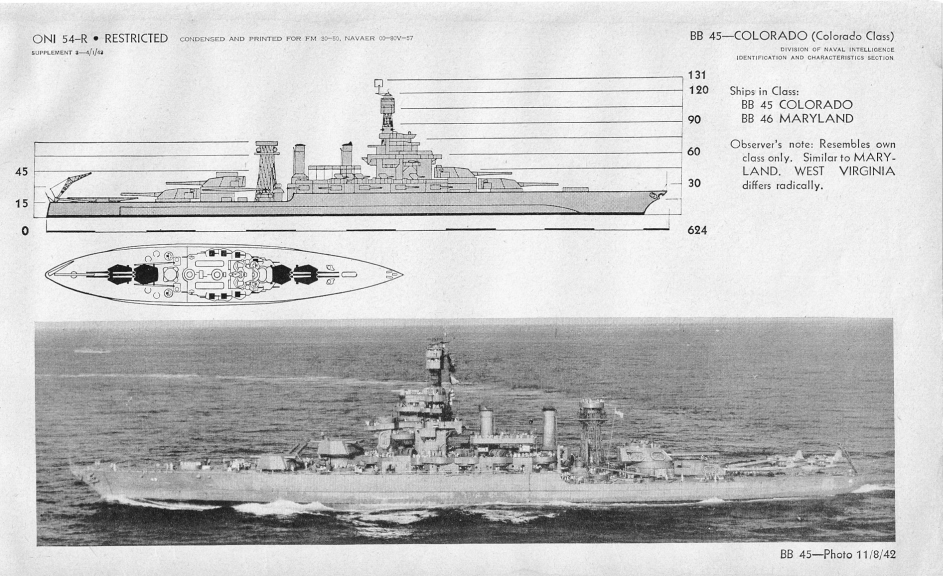 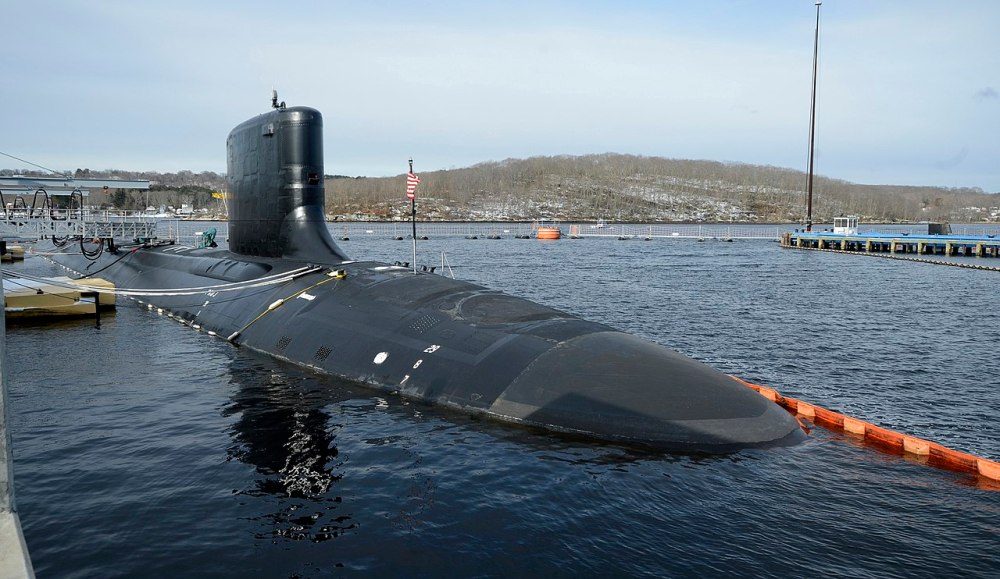 USS Colorado (SSN-788) is a nuclear powered United States Navy Virginia-class attack submarine, named for the State of Colorado. She is the fifteenth of her class and fifth of the significantly redesigned Block III, including a revised bow and VLS technology from the Ohio class of guided missile submarines. She was constructed by Huntington Ingalls Industries in partnership with the Electric Boat division of General Dynamics in Newport News, Virginia, with the initial contract awarded on 22 December 2008.

The official naming ceremony was on 25 June 2012. Her keel was laid down on 7 March 2015 and she was christened and launched on 3 December 2016. Her sponsor is Annie Mabus, daughter of former Navy Secretary Ray Mabus

The following ships were named Colorado

USS Colorado (ACR-7), a Pennsylvania-class armored cruiser in commission from 1905–1927

The world is as dangerous now as it ever has been. Competing interests and rapidly changing technology will provide planners and tacticians with enough nightmares to fill an ocean. Let us hope that we can maintain enough of an edge to keep the country free. 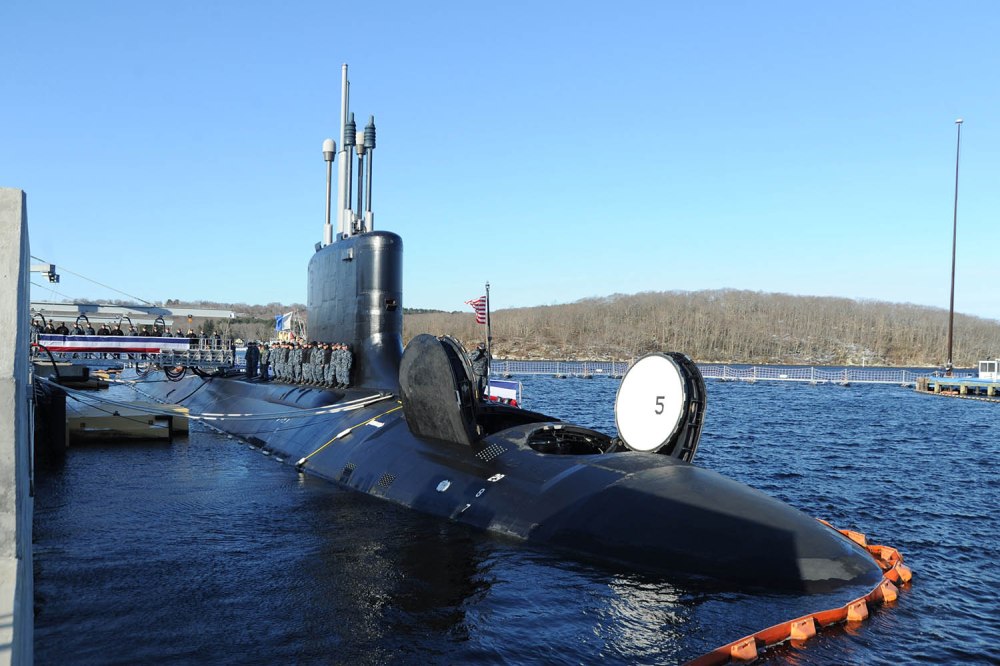