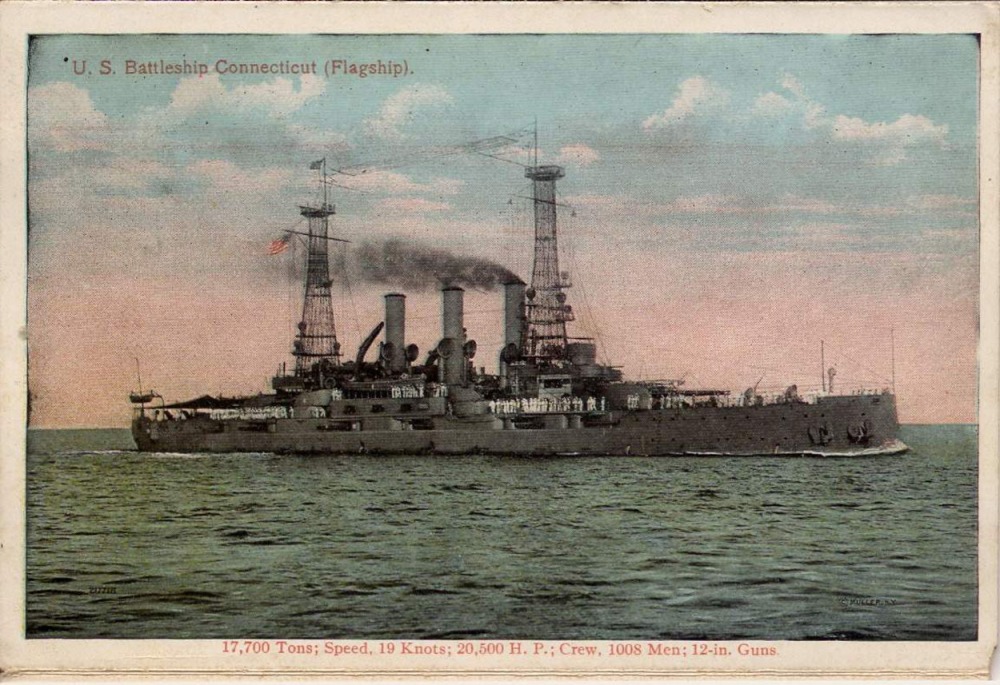 Taking care of the Army… Again

Dedicated to my Army friend Phil

When World War 1 ended, the United States had many soldiers that were stationed in France and Belgium. They had been sent there to help “Defeat the Hun” and now they were ready to come home. My Great Uncle Alex was an Army Doughboy and my Grandfather John was a sailor on an old Monitor from the previous century. I am sure that family gatherings for years after the war were spent arguing about which service was better and did more in the Great War.

But the real question in 1918 was how to get all of those soldiers home in a way that was cost effective and relatively swift.

The fighting had all but ended on November 11, 1918 on what would be known as Armistice Day for many years.

One unique solution: Use the Navy’s Battleship fleet that had largely been kept at home during the war. At the close of the war, the Battleship Connecticut and some of her sister ships like the Kansas were fitted out for transport duty, and between 6 January and 22 June 1919 made four voyages to return troops from France.

The Navy will have quite a job getting ships and crews into shape again after the soldiers are home, but it is glad to help

GREAT JUMPING JEHOSEPHAT! What is the Navy coming to?” wrote a high ranking army officer when he heard the battleships were being used to ferry the soldiers from France. The Navy thought about the same of the scheme as this army officer did. For sixteen months—ever since the United States had entered the war, in fact—these ships had been in Chesapeake Bay, with an occasional short cruise on the outside; one fortunate Squadron of the newer dreadnoughts had sailed away to join the British Grand Fleet and assist in the ceaseless North Sea vigil.

The much envied cruisers had been escorting the troop ships across— playing in Heinie’s back yard, almost. Toward the latter part of the summer of 1918, when there was a rumor that the German fleet would come out and risk all on one last grand battle, some of the battleships were detailed for convoy duty and one was sent along with each troop convoy to fend off any German battle cruiser lucky enough to give the slip to the hawk-eyed British-American Fleet. The work of the battle fleet on the American side had been mostly “watchful waiting”—watchful drilling would probably express it better. They had been at it hammer and tongs, competitive coaling, steaming, maneuvering and shooting, and they were fit as fiddles. Each officer and man knew his ship and, what counts for more, they knew each other. There was pride of gun’s crew, of turret, of division and of ship. It was a case of the devil take the hindmost. The ship that fell down on her shooting was investigated. Under all this strenuous work the battleships were in good shape, they were “ready for a frolic or a fight,” as “Teddy” once put it, and it was only natural that naval officers regretted to see them taken out of their legitimate military duty and put to work as transports. Preparation for transport duty meant taking something like half the regular crew off the ship and sending them to shore stations to have more room for the doughboys; it meant a new and green crew when the ships got back to the regular job; this in turn meant a “shakedown cruise” of about two and a half months before these fine ships would be again ready for the battle line.

But the Navy and the Army adapted. Makeshift bunks were assembled on the way to Europe and when the soldiers came on board for their ride home, they entered a strange existence. The care and feeding of the troops presented some logistical challenges. Here is a short vignette of how at least one meal was dealt with:

“In both France and Belgium the Army has had to live mainly from a tin can; fruit and vegetables have been scarce over there and, in consequence, the soldiers who have returned on the battleship ferryboats firmly believe the sailors fare like former kings or present day bolshevists of high rank.

This is a sample of what one of the battleships gave our returning heroes for a New Year’s dinner:

There were so many men aboard ship that the cafeteria system had to be used, i.e., five or six serving out tables were distributed around the ship and lines of men marched by and the ration was dished out into each man’s field mess kit.

This mess kit consisted of the meat can, about eight inches long by six inches wide by one and one-half inches deep; a flat cover is fitted over the can and inside were carried the knife, fork and spoon; the only other “dish” in the mess kit was a canteen cup about five inches deep, three inches wide and three and a half inches long.

A sailor believes there are other ways to kill a dog than the time-worn one of choking it to death with butter, so one can always trust him to find some way out of a dilemma. After many grave pow-wows between the ship’s cook and the chief commissary steward it was decided to serve out the dinner, as the soldiers passed by, as follows:

Can Cover:—Fruit pudding, lemon sauce, bread and butter (on top).

Overboard: The giblet Soup. The ship’s cook explained later that “the damn soldiers didn’t have room for the giblet soup anyway.”

The doctors had little trouble in keeping the men well. One ship had 1,930 passengers on board for nineteen days and yet the percentage of sick was kept below unity. Service in the trenches and active campaigning had made them hard as nails, so I doubt whether you could have killed one of them with an axe. The Navy was very suspicious of cooties. Several weeks before going aboard ship the Army authorities began to inspect and decootieize, and the troops had to be reported all clear before going aboard ship, but the Navy took no chances. Every two or three days during the passage across a cootie inspection was held and, in a few cases it was found that a cootie or so had passed the Army inspection (pretty healthy cootie!). We made short work of them by having the men strip down “to a gantline,” take a brisk scrub in salt water soap and have all his clothing steamed. Second or third inspection almost always found them with a clean bill of health as far as the friendly cooties were concerned. 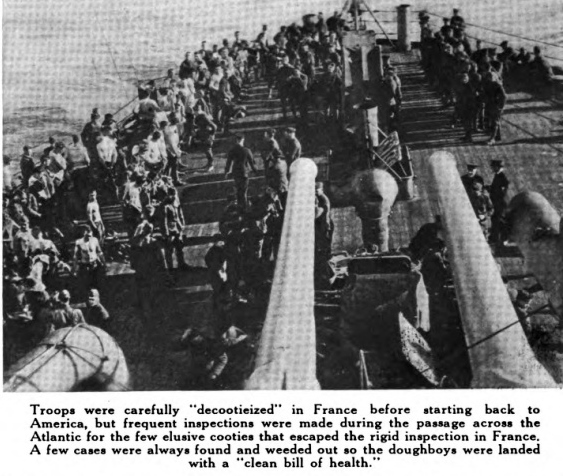 After two or three days aboard ship the doughboy got his sea legs and then the rest was like a yachting trip. His day was: Eat; exercise for half an hour, sleep or read; eat, spin battle yarns to the sailor; eat, lie some more to the sailor and turn in for the night. As proof that the soldiers like these trips on a man-o’- war it is only necessary to look at the Navy’s recent enlistment records; they are all quitting the Army and enlisting in the Navy. The doughboys liked the eating and sleeping part of the trip fairly well, some of them said, but they fairly reveled in lying to the sailor. After about twelve days of it the soldiers themselves believed the yarns, they did not even need to make an easy approach and tell it to the marines, the sailors drank it all in as pure and undefiled truth and called for more. After such practice what an easy time doughboy will have at home!

Notwithstanding the fact that, on account of losing the trained men, the Navy has to “rub out the slate” and start afresh with a green crew in the great game of Prepare for Battle, it is all in the day’s work and we are glad we are helping to bring the boys home. We guarded them and fended off Fritz when they went over and we want to be in at the finish and see them safely back to the good old U.S.A. We are glad to help Uncle Sam save the two hundred and forty millions—for he sorely needs to save a little here and there! We are also happy they are getting home for the gladness it brings to the heart of Mother, Sister and Sweetheart. We can see them now when the train pulls in to the little country station. A little shaver, aged six, is sitting on the soldier’s shoulders with his arms clasped around the overseas cap; he is laughing, the little rascal, how he would have loved it to be with big brother in France fighting the Germans! The soldier is smiling, just brimful of happiness. The girl, just the height of his shoulder, is holding one of his hands, and she too is smiling. On his other side is another woman, a little bit bent, with touches of grey in her hair. She has her eyes covered with a handkerchief, this older women—why, she is crying!”

Phil is a Vietnam Veteran. There were parades when the Doughboys came home to America but there none for the men and women who served in Vietnam. I have always felt that it was one of the greatest injustices of our time. It remains a dark chapter of American History.

I have the greatest respect for Phil and as much as one man can love another as a friend, he ranks higher than anyone I am not directly related to. Our friendship goes back at least 20 years and I would defend him to the death.

Except on one day a year. With that in mind, I will end with my traditional greeting to him on that day:

PS… this is the latest USS Connecticut Phil… pretty sure they don’t let an Army boys ride her, but I am sure the lobster and crab are plentiful 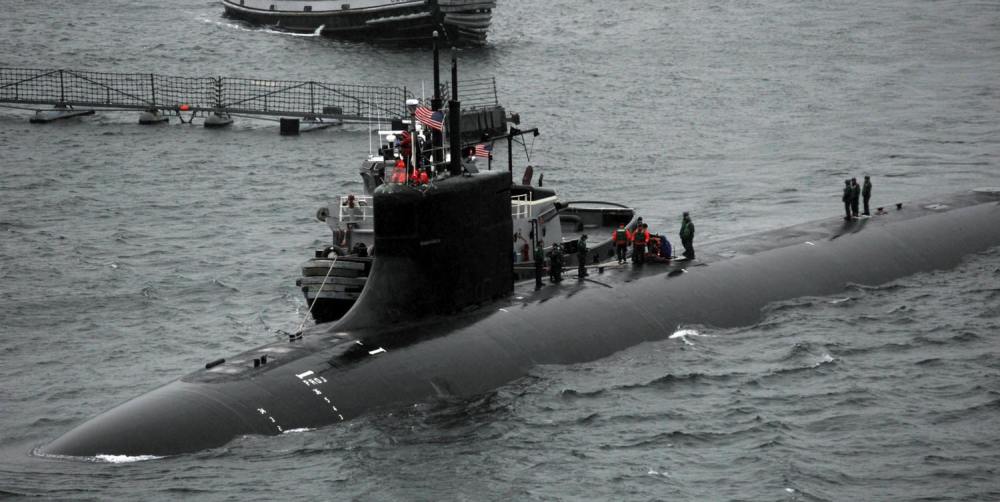