You’ve got Polaris, why on earth do you need bigger carriers?

This was the first speech given to the Navy League by Secretary Franke. Franke served in the new Kennedy administration. The source document comes from amalgamated press releases recorded from 1959-1962.

In May of 1960, the secretary was giving a standard speech about the overall disposition of the Navy but used the occasion to dispel rumors and myths about the fledgling Polaris program. The various services were watching with anticipation to see if the Navy and its supporters would be able to successfully launch the Polaris program. At issue was the large amounts of money being diverted into the program that the Air Force and Army would have preferred go into their own missile and weapons systems.

Polaris was meant to be a threat to any opposing forces but was a real threat to the future of the other armed services of the United States. Mission and purpose were always in flux following World War 2 but were especially critical during this crossroads of American history. The Soviets were building larger and more powerful armies and air forces and occupied many countries in Europe and Asia. The Korean war showed that limited wars were still possible even in a nuclear age and the rumblings in South East Asia were growing louder by the day.

The Navy’s nuclear submarine and Polaris were a very real threat to the other forces and their supporters including industry members that were dependent on growth. They were probably busy taking shots at every potential missed deadline. It’s possible to imagine that there was actual delight when things went wrong.

Another internal struggle resided with the components of the Navy that had pushed for larger and more complicated aircraft carriers. The aging Essex class carriers were now in their second decade of service and statistics were starting to emerge that the faster jets were experiencing safety concerns. The Admirals from the air arm of the Navy were also experiencing some anxiety about the funds that were increasingly being diverted to the submarine navy. The next generation of nuclear powered aircraft carriers were just emerging and a successful Polaris program may have struck a death blow to their funding and support.

This speech addressed all of these concerns.

The speech was made to the Navy League but the intended audience was undoubtedly the entire range of supporters and opponents of the Polaris program. Secretary Franke’s comments were very clear about the impending successes of the program. History would prove him correct. But on that night, it was important to tell a balanced story about the Navy’s future.

HOLD FOR RELEASE UNTIL DELIVERY OF ADDRESS EXPEC.ED AT 8: 00 P. M., PDT FRIDAY, 6 MAY 1960, ADDRESS BY THE SECRETARY OF THE NAVY, THE HONORABLE WILLIAM B. FRANKE AT THE ANNUAL METING OF THE NAVY LEAGUE OF THE UNITED STATES, ANAHEIM, CALIFORNIA

The first part of the speech gives an account of his recent travels around the fleet to see the operational units in operation. Many of the ships were holdovers from World War 2 that had been modernized but the need for new super carriers was rapidly emerging. After discussing his observations about the many units he saw, he settled into the main topic of the day.

From the second part of the speech (starting on page 4)

“There is some feeling that the increasing importance we are giving the Fleet Ballistic Missile submarine system ( commonly called the Polaris system) indicates that we no longer consider carrier task forces to be essential. This is not true — but before I talk further about carriers, I went to talk for a few moments about the Fleet Ballistic Missile submarine system.

It is of great importance that we keep uppermost in our minds the continuing and unchanging value of all components of our naval power, particularly because of the impact that the Fleet Ballistic Missile submarine system is having on the minds of our countrymen, our allies, and our enemies today. This weapons system is of the utmost importance to this country; and you may be confident that the Navy will do everything it can’t bring it into operational readiness as soon as possible. In spite of what you may have read in our newspapers, or heard from the lips of your contemporaries, or acquaintances, I can assure you that the Fleet Ballistic Missile submarine system will be ready on time and will prove to be as effective as we in the Navy have long claimed it to be. Each portion of this very complicated system has now passed its test and the Navy hopes soon to prove to the last doubter that it is ready by firing a complete shot from a submarine to a designated target. The Navy has recommended that the Fleet Ballistic Missile submarine program be speeded up to provide the earliest possible operational capability with the submarines and missiles now under construction and, further, that the program be augmented.

The Secretary of Defense has approved the reprogramming by the Navy of 52 million dollars of Fiscal year 1960 Navy funds to enable the Polaris submarines now under construction to be speeded up to the maximum possible.

On April 6th, the President, on advice of his defense leaders, sent to Congress a proposal to add 153 million dollars to the Fiscal Year 1961 budget for purchasing advance items for six more Polaris submarines. The Secretary of Defense subsequently stated before the Johnson Subcommittee that — if this summer’s test firings are successful — he will not hesitate to give it further support.

There have been statements made in the press and by individuals casting doubt on the eventual success and the capabilities of the Polaris Fleet Ballistic Missile submarine System. I will review for you a few of the more common misapprehensions and give you the true facts in each case. 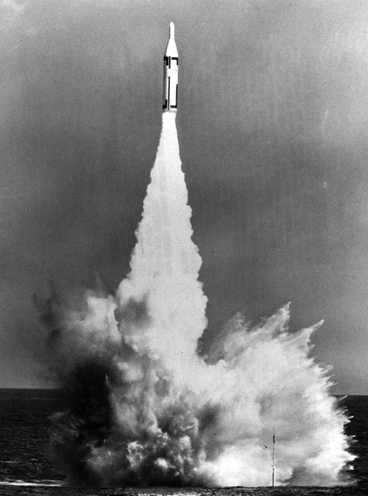 There seems to be some belief that — since announced – ranges for Polaris missile test flights have been about 900 miles — the missile will only go that far and not 1200 miles as the Navy has claimed. For the record, these test missiles carry heavy recording devices and transmitters which enable us to analyze the performance of the various components of the missile. These instruments will not be required in the tactical missile which will go l200 miles.

It has been said that the Fleet Ballistic Missile System is behind schedule. One person mentioned that it was two years behind. Some say the submarines are ready, but the missile won’t be. These statements are not correct. The submarine was supposed to be ready first. All critical tests have been passed with flying colors by both missile and submarine ––– and the entire system will be ready as advertised — two submarines with their missiles by the end of this calendar year.

Some have said Polaris submarines cannot defend themselves and can be found and destroyed. Polaris submarines have detection equipment and anti-submarine torpedoes for protection just like other submarines. Any nuclear-powered submarine is hard to find when it is avoiding detection — even for our own well-trained forces. The possible launching areas available to us and the tactics we intend to use make this a hollow fear.

For your information, at any time about one-half of all Polaris submarines will be on station and ready for firing — not one-third as some critics have claimed. The explosive power of the warheads carried in one Polaris submarine will do a terrific amount of damage — and the warhead is proven and ready.

But successful as it may be — and I want to emphasize this next point very strongly — the Polaris Fleet Ballistic Missile submarine system does not in any way lessen the value of the other vital elements of a balanced Navy and Marine Corps, nor the necessity for them. We still have the same tasks to perform regardless of Polaris — and these tasks are still necessary to our country’s well-being and survival.

Our Navy carrier task forces are still contributors to the nation’s total deterrent force. They have deployed and ready at all times more than 200 carrier-based aircraft which can deliver atomic weapons many hundreds of miles inland, from carriers which are constantly moving and which must be found by the enemy before he can take stops to counter them. In times of crisis this number of aircraft can be doubled.

There is still a need for carrier task forces to provide measured power wherever the vast waters of the earth enable them to travel and wherever they are needed to prevent or contain a limited war. Polaris will not prevent another Lebanon — or Korea — or a Quemoy — or a Berlin crisis. Adequate limited war forces will always be needed.”

“In these days ––– whom a nation can be destroyed in thirty minutes — it is time for all men and women to under Stand this terrible fact, and to take some active part in determining their destiny. I do not think many people in this nation yet understand the fundamental issues involved. Few understand what Polaris is — or what tremendous implications its success has. Many think it is just another missile — and fail to recognize that it will be instantly ready and almost invulnerable. Some of those who have a superficial understanding of what it can do fail to think farther and ask such questions.

“Now that you have Polaris submarines, why do you need aircraft carriers?”

They fail to appreciate that a state of mutual deterrence may bring on more and more limited war situations and an increasing need for carriers, amphibious forces, Marine Corps forces, and other limited war forces. These hard facts of life are known to you members of the Navy League — and I am here today to confirm them — in the strongest terms. Together we have a job to do —- to make these facts known to the American public. You in all the cities and communities reached by your councils and I wherever I can. We have a difficult job –— but the knowledge of the importance of the task should make it easier, I wish us both luck. Thank you.”

The Secretary’s speech was certainly prescient. In the coming months, the nation would find itself involved with the Cuban Missile Crisis. Global hot spots around the globe and an ever increasing commitment to a small country in South East Asia that would end up consuming enormous amounts of American treasure and blood: Vietnam. The Polaris fleet would rapidly grow but the rest of the Navy and the Marine Corps would find themselves needing every single asset to prosecute their missions.