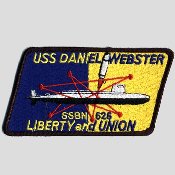 The years leading up to the Civil War are filled with stories about men who tried their best to protect what was euphemistically called state’s rights and those who were bound and determined to end the scourge of slavery. Daniel Webster was one of those who was committed to ending the practice once and for all while still preserving the fragile Union. Yet he was also responsible for compromises that led to an extenuation of the practices which ultimately led to the succession and the Civil War he fought so hard to prevent.

Daniel Webster was an American statesman who represented New Hampshire and Massachusetts in the United States Congress and served as the United States Secretary of State under Presidents William Henry Harrison, John Tyler, and Millard Fillmore. He was also a prominent attorney, especially during the period of the Marshall Court. Throughout his career, he was a member of the Federalist Party, the National Republican Party, and the Whig Party.

In 1959, the Senate named Webster, Clay, Calhoun, Robert M. La Follette, and Robert A. Taft as the five greatest senators in history. It is interesting to note that only Webster, Clay and Calhoun ended up having their names added to the list for the 41 for Freedom boats. 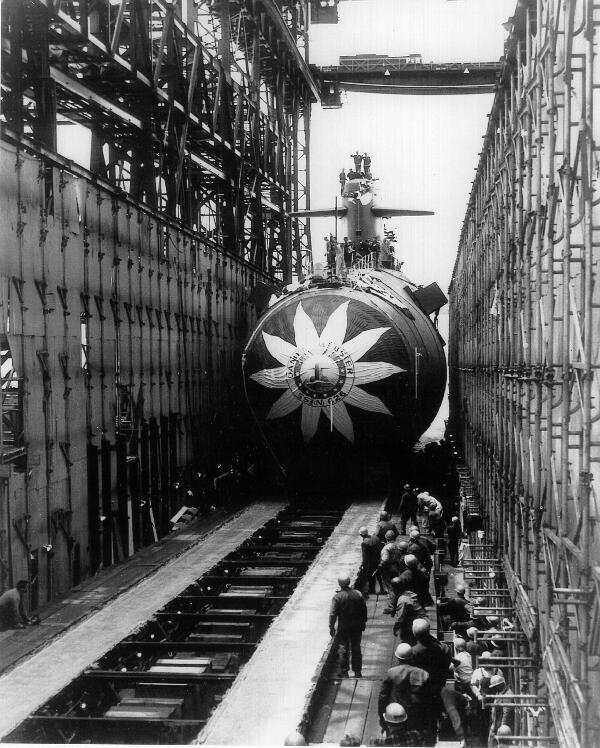 The contract to build Daniel Webster was awarded to the Electric Boat Division of General Dynamics Corporation in Groton, Connecticut, on 3 February 1961 and her keel was laid down there on 28 December 1961. She was launched on 27 April 1963, sponsored by Mrs. W. Osborn Goodrich, Jr., and commissioned on 9 April 1964, with Commander Marvin S. Blair in command of the Blue Crew and Commander Lloyd S. Smith in command of the Gold Crew.

Daniel Webster was originally built with diving planes mounted on a “mini-sail” near the bow, leading to her nickname “Old Funny Fins”. This configuration, unique to US submarines, was an attempt to reduce the effect of porpoising. While successful, the “mini-sail” required to contain the operating mechanism reduced hydrodynamic efficiency and lowered her overall speed. During a mid-1970s overhaul, these unusual planes were removed and standard fairwater planes were installed.

While in service, Daniel Webster was the last Lafayette-class submarine to be retrofitted to carry UGM-73 Poseidon missiles. 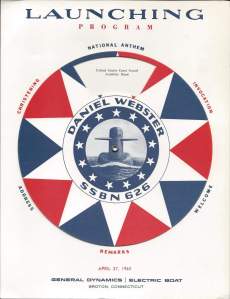 Daniel Webster (18 January 1782 – 24 October 1852), was a leading American statesman during the nation’s antebellum era. He first rose to regional prominence through his defense of New England shipping interests. His increasingly nationalistic views and the effectiveness with which he articulated them led Webster to become one of the most famous orators and influential Whig leaders of the Second Party System.

Daniel Webster was an attorney, and served as legal counsel in several cases that established important constitutional precedents that bolstered the authority of the Federal government. As Secretary of State, he negotiated the Webster-Ashburton Treaty that established the definitive eastern border between the United States and Canada.

Primarily recognized for his Senate tenure, Webster was a key figure in the institution’s “Gogen days”. So well-known was his skill as a Senator throughout this period that Webster became a third and northern counterpart of what was and still is known today as the “Great Triumvirate,” with his colleagues Henry Clay from the west and John C. Calhoun from the south. His “Reply to Hayne” in 1830 was generally regarded as “the most eloquent speech ever delivered in Congress.” Similar to Henry Clay, Webster’s desire to see the Union preserved and conflict averted led him to search out compromises designed to stave off the sectionalism that threatened war between the North and South.

Webster tried three times to achieve the Presidency; all three bids failed, the final one in part because of his compromises. Similarly Webster’s efforts to steer the nation away from civil war toward a definite peace ultimately proved futile. Despite this, Webster came to be esteemed for these efforts and was officially named by the Senate in 1957 as one of its five most outstanding members.

Admiral Rickover devoted nearly fifteen pages to Webster in his book Eminent Americans. Like his chapter on Henry Clay, he spent a lot of time discussing the many years before the Civil War when the two men were significant forces in trying to preserve the union.

Daniel Webster was decommissioned on 30 August 1990 and struck from the Naval Vessel Register the same day. She was converted to a moored training ship (MTS) and S5W reactor prototype training facility, by the Charleston Naval Shipyard at Charleston, South Carolina. Upon completion and designated MTS-626, she was towed up-river to her permanent berth at the Naval Nuclear Power Training Unit Charleston.