I am old enough to remember when Memorial Day was held on the 30th of May. When I was a kid, the ceremonies were large and very well attended. There was always a competition between communities to see who would have the lager parade or the more elaborate service. There were always men in uniforms and choirs to sing the patriotic songs that had been written to honor the heroes of years past.

The speeches were always too long. Where I grew up, Memorial Day was kind of a hit and miss when it came to weather. Western Pennsylvania in late May could be hotter than an oven or wetter than the Atlantic depending on the year. But some years, everything just came together and we had an amazing day to honor our dead.

Up until 1970, people made it a priority to have the ceremonies. That is the year that Congress decided to pass a law making Memorial Day part of the “three day weekend” craze. I don’t know if it was that act or the Vietnam War which hurt the event more but things were never really the same since then.

We still remember the day. Sort of. But the numbers grow smaller and smaller each year. We are also losing the remaining World War 2 vets who carried the rifles and flags for all those years. Korean and Vietnam veterans are now joining the ranks of the men and women who are passing on to the next life. I have no idea where everyone else has disappeared to but as I looked around at social media yesterday, there are some serious holes in the ranks of the participants.

I think the divisions in the country are working against us now. It seems we have another great civil war going on minus the bullets and cannons. People are just not as enthusiastic about setting aside their differences even for a day. We haven’t really had much unity since 9 11 and frankly, it’s getting worse and worse all the time. It seems like we have lost the whole meaning of the Day in the process.

This year I was asked to speak at a couple of local Memorial Day ceremonies. This was the speech I gave. As I looked out into the faces of the people. I wonder if they got the message. There weren’t a lot of people but at least they were there. I kept it short so the kids wouldn’t fidget as much. I remember being one of them and hoping the speaker would be brief so we could get back to our day off.

May 27, 2019 Speech at Herminie and Rillton in Sewickley Township, Westmoreland County Pennsylvania

When the soldiers came back to Sewickley Township after the cannons stopped firing, they were ready to return to their lives. Gone were the sacrifices of living in tents during every season – rain, snow or shine. Gone was the incessant marching and drilling. Gone was the chaos of battle with long rows of men marching towards each other, bayonets and bullets cutting down lives as easily as a scythe cutting down wheat.

They probably wanted to forget the smells and sounds of destruction. Like every soldier that has ever been through hell, they wanted to taste the sweetness of an early morning sunrise without fear. The wanted to forget the ringing calls of a bugle urging them into the fire and the sound of exploding shells that took their toll on the men they served beside.

They came home and wanted to just thank God they survived.

But others were not so ready to forget. Without a proclamation or national order, a movement began. The mothers, wives, sisters and daughters all devoted their love to remembering the ones they loved.

They remembered the joy of seeing their men volunteer to serve in a cause they believed in so greatly that they were willing to surrender their freedom for someone else’s. They remembered how proud they were to see them in their uniforms as they marched away to the sounds of drums and bands. They remembered the anxious nights as the telegraph carried news of horrendous battles that were nearly impossible to describe no less understand. In cold dead tones, they tried to understand the horror of war and make sense of the death tolls that were growing every month.

Even while the war raged, grim reminders surrounded them of the cost. Men with mangled arms and legs who came home only to find that little was available in the way of help. Fields that were not plowed nor those that were not harvested in time to prevent the ravages of the seasons. And worst of all, the visit from the officers tasked with informing them of their husband or sons tragic but honorable death.

Their grief burned remembrance into their hearts. There would be no more tender embraces nor chances to see their smiling faces. The children would have to learn to live with a memory as well. Pictures of their lost ones were rare since they were considered a luxury. They would have to settle for a cold hard stone with a name and rank scribed on its face.

At war’s end, it was the women who began the tradition of going to the cemeteries where their loved ones remains were buried and decorating them with flowers. In a tradition that dated back to the ancient Greeks, flowers symbolized both life and the honor of their memories. These grief filled women saw past the dark and foreboding reasons for their deaths and chose to celebrate their lives. The grief was universal. In a war where brothers fought against brothers and people who had lived under the same flag found themselves in mortal combat, it was a shared sense of grief that united the country once again.

“On May 5, 1868, General John A. Logan, leader of an organization for Northern Civil War veterans, called for a nationwide day of remembrance later that month. “The 30th of May, 1868, is designated for the purpose of strewing with flowers, or otherwise decorating the graves of comrades who died in defense of their country during the late rebellion, and whose bodies now lie in almost every city, village and hamlet churchyard in the land,” he proclaimed.

The date of Decoration Day, as he called it, was chosen because it wasn’t the anniversary of any particular battle. On the first Decoration Day, General James Garfield made a speech at Arlington National Cemetery, and 5,000 participants decorated the graves of the 20,000 Union and Confederate soldiers buried there.” Less than three years from the firing of the last shot, the shared grief became a national symbol. This simple act helped to heal a nation.

In the years to come, more wars would come and more young men would join their comrades in arms in making the eternal sacrifice. Their names were added to the lists of those who would never come home. They would later be joined by women that served and sacrifice their own lives and liberties in defense of an idea called America.

We are here today to remember their sacrifices. But in a larger sense, we are also here to remember those many women and families whose sacrifices did not end with the last breath of their loved one. Their pain and grief would go on for the rest of their lives. Their sadness had no end date. They had to come and lay flowers.

Their grief united a nation that was torn apart. This was not just a conflict of words or ideas, this was a conflict that was violent and obscene. The grotesque deaths caused by horrendous weapons should have kept the warring sides from knowing peace or forgiveness for generations. But the conqueror and the vanquished found themselves in hallowed grounds. While separated by distance, they united in love for the ones who were lost.

Our country and our communities need to stop for a moment and really remember what this day means. We need to put down the disease of divisiveness and embrace the amazing grace that is America. A country that has been a beacon of freedom for so many over the decades has to come together once more. Not just on this day, but on all days. We have to remember that the blood that was shed was shed for all of us together. We have to remember those fateful words from Abraham Lincoln: “A house divided against itself cannot stand”.

The greatest honor we pay to those who have given their all is to dedicate ourselves to remembering what they died for. We must never give up the idea of a truly United States of America. Our very freedom is at stake. Our children’s future is at stake. Our country is at stake.

My words will evaporate into the atmosphere as quickly as I finish speaking today.

But my hope and prayer is that the memory of why we are here today never will. God Bless you and God Bless America. 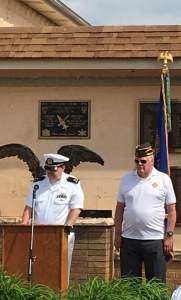 5 thoughts on “A day to remember”