SEA TRIALS – TESTING THE BOAT AND THE CREW 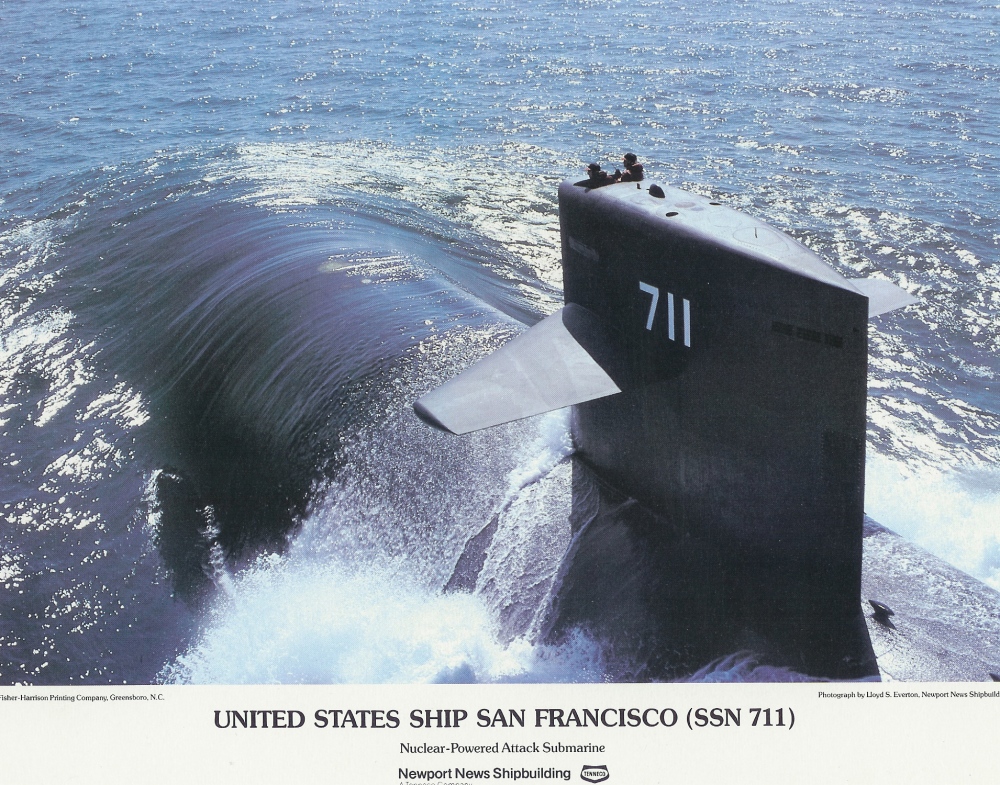 Out of the vast cauldron of experiences related to being a Submariner, memories of one experience on submarines normally dominates above all the rest for someone who was a Plankowner of a sub.

I have a lot of memories of the sea trials on board the USS San Francisco since I was standing watch as the Auxiliaryman of the Watch in the control party at the time.

I remember Admiral Rickover arriving on board as we prepared for the trials. I specifically remember how old he looked in 1981 and frail. But his actions for the next two days were anything but frail. He left a very deep impression on everyone who was on board that fast attack submarine. I stood just a few feet from him at the end of the trials and listened to one of the most eloquent speeches I have ever heard before or since. One of my shipmates has a copy of the speech in his memory book. I reread it a few years ago at a reunion and the words came back just as if he was standing there saying them. Maybe someday I will ask Jerry for a full copy of them and publish them here.

The article for today comes from an article published many years ago by the United States Atomic Energy Commission Historical Advisory Committee. The actual title was Nuclear Navy 1946-1962 by Richard G. Hewlett and Francis Duncan.

FRANCIS DUNCAN was assistant historian of the U.S. Atomic Energy Commission. He is the coauthor of Atomic Shield. [1974]

RICHARD GREENING HEWLETT Died peacefully on September 1, 2015, at Maplewood Park Place in Bethesda, Maryland, with dear friends at his side. He was 92. Born and raised in Toledo, Ohio, he lived in the Washington area for 64 years. His Dartmouth education was interrupted by Army technical training at Bowdoin and Harvard, followed by service as an Army Air Force electronics-weather specialist in China during WWII. He completed his studies in 1952 at the University of Chicago, receiving a Ph.D. in history. Richard was chief historian of the Atomic Energy Commission (AEC) and its successor agencies from 1957 – 1980. He co-authored a 3-volume AEC history and a history of the Nuclear Navy which received critical acclaim and several awards.

Francis was born on July 12, 1922 in Oak Park, Illinois, United States. Son of Fred B. and Olive (Whitney) Duncan. I have not been able to find an obituary that has his name attached. If he is still alive, that will mean he is 97 this year. Pretty remarkable.

The book they published covers the whole development of the nuclear submarine program and the nuclear Navy. It is still available so I would encourage you to find a copy of it if you want to do any serious research.

But today, I want to focus on that period in a boat’s life called Sea Trials. This is the test of the boat and the crew that will ensure the builder has done their work and the Navy has trained the crew sufficiently. It is to the eternal credit of both builder and Navy that our submarine force has such an amazing record. What follows is a pretty remarkable record of what many of us went through to become part of a rare group of submariners.

Plankowners are those on board during the building, testing and early deployment phases of a new submarine. Once you have done that, the boat is forever yours. Other crews will come after you and operate her. But only that first crew takes such strong ownership that lasts a lifetime. This article is for those men (and now women).

“For the commanding officer a major change in status came when the sea trials were only a few weeks away. He then became the “officer-in-charge,” and although the ship still belonged to the builder, he was finally responsible for the vessel, its physical integrity, and the safety of the personnel. The submarine was operated insofar as possible as a Navy ship and more than ever the tests were those of both the crew and the vessel operating together.

The first time the prospective captain had the ship to himself was during the “fast cruise.” For about four consecutive days the ship was sealed and moored “fast” to the dock. In all respects the submarine was ready for sea with her full crew, stores, and essential spares. No one except the assigned officers and crew was on board. The ship’s force conducted drills and operated the equipment—including the propulsion plant—insofar as possible as if they were at sea. The captain had an opportunity to check the condition of his ship and the training of his officers and men. His only communication with the shore was by telephone, by which he reported at least daily to Rickover.

The readiness of the ship at the time of the fast cruise usually made it possible to begin actual sea trials a few days later. During the sea trials the ship was crowded with “riders” in addition to the full crew. The typical complement of riders on a submarine built at a private yard and containing an S5W propulsion plant included several engineers from Code 1500, the Code 1500 representative at the yard, senior company officials and engineers, the supervisor of shipbuilding, a few officers from the technical desks in the bureau, a captain from the submarine force, the Bettis resident engineer, some contractor and vendor personnel, and Rickover himself.

The presence of these high-ranking officials made the sea trial anything but a routine experience for the crew, but Rickover’s presence made the greatest difference. Even by 1957 he had become something of a legendary figure in the Navy, and his arrival aboard ship visibly affected the entire crew. Quickly boarding the ship in civilian clothes Rickover customarily climbed to the bridge to observe the departure. Later Rickover inspected the propulsion plant. During most of the trial he worked in his cabin and appeared in the attack center or the maneuvering area (as the reactor control compartment was called) only during critical tests.

One of these was the submerged emergency stop, an evolution which placed a heavy strain on the propulsion plant.

The signal for a crash stop came when the ship had been steaming below the surface at full speed for several hours. Usually there was a flurry of disciplined activity as the men at the control panels spun steam throttle wheels and manipulated switches so that the plant could answer the order for full speed astern. Rickover and a few of his technical group crowded into the small maneuvering area to observe the instruments or performance of the crew.

Occasionally Rickover might reprimand one of the officers for improper procedures in giving commands or in crew response. Aside from the dials it was usually difficult to tell that the submarine was coming to a stop. The sudden loss of power was another important test. The intentional tripping of an alarm shut down the reactor and left the entire ship on emergency power. By following proper procedures the well-trained crew could bring the reactor back into operation without delay.

Obviously it was vital to avoid a long shutdown of the reactor plant.

Rickover watched every move of the men at the control panels, ready to criticize the slightest hesitancy or careless action. Each engine room watch performed the emergency tests under Rickover’s practiced eye. Occasionally Rickover would tap the engineering officer of the watch on the shoulder and declare him “dead.” That left three young enlisted men, some of whom were going to sea for the first time, to handle the critical procedure alone.

The sea trial was, in Rickover’s opinion, a true test and not just a simulated exercise of the ship and her crew. The emergency drills were performed on a real ship at sea, below the surface of the ocean. There was an actual, if remote, possibility that a crew error or an equipment failure could endanger the ship.

Sometimes, though rarely, the unexpected occurred. During the sea trials of the Triton the submerged emergency reversal brought the ship close to danger. All submarines were somewhat unstable in a full-power reversal and had a tendency to “squat,” or sink deeper stern-first as the ship backed down. Because the Triton was unusually long and narrow, this instability proved especially strong.

As the ship lost her forward motion and the now reversing screws began to bite the water, the vessel started to oscillate and sink by the stern. Quick action by the crew regained control of the ship.

Moments like this sometimes exposed the strong sense of responsibility which Rickover felt for the ship and her crew. If any equipment directly affecting the safety of the ship appeared to be operating abnormally, Rickover investigated the matter himself on the spot. He alone would decide whether it was safe to proceed. Although he would never lightly dismiss any fault or malfunction, he would not tolerate an overly cautious approach, especially if it threatened continuation of the trial. He maintained that a naval vessel had to be ready to perform its mission under any circumstances and that it was the crew’s responsibility to find a way to operate the ship safely even under less than perfect conditions.

On one trial there occurred a steam leak which the engineering officer believed would worsen during the full-power run. Rickover disagreed and backed up his opinion with action. He cleared the area of all personnel and sat down to watch the leak himself while the trial continued.

These incidents were not foolish heroics. Rickover did not take such risks needlessly. He was trying to convey the idea that on a nuclear-powered ship, particularly a submarine, the officers and crew had to bear full responsibility for their actions. They were not involved in a simple drill, but in a deadly serious enterprise on which their lives might depend. Rickover’s own presence on nearly every trial and his obviously deep personal concern about the performances of the ship and her crew instilled in the men of the nuclear fleet an attitude which a thousand hortatory letters could never have evoked.

I am glad that the old man was there for our trials.

The San Francisco was one of the last boats he rode before he was retired. I am glad he saw the Navy through to such amazing success during his day. I am also eternally glad that he didn’t notice a very nervous second class petty officer that wanted to be as invisible as possible during his stay.

I wonder how many others felt that way through the years.

4 thoughts on “SEA TRIALS – TESTING THE BOAT AND THE CREW”