In 1988, I had applied to the Navy’s Chief Warrant Officer program and had a good feeling about being accepted.

I had taken a number of hard assignments along the way with a broad range of experience. Machinist Mate, Career Counselor, Master Training Specialist and a lot of outside education along the way (nearly all of a Bachelors Degree program from Southern Illinois University). I had been an Leading Petty Officer and Leading Chief and never failed to be the first to step up when help was needed.

My favorite quote from the Captain of the Trident Training Facility when I was awarded my designation of Master Training Specialist was “Your performance stands as an example for us all. Well Done.”

The only problem was that I was scheduled to transfer from my position at Trident Training Facility in Bangor Washington and would not find out about making Chief Warrant Officer until one month after the date I was due to transfer.

As an experienced A Gang Chief, I knew that there were a number of boats on the waterfront that could use my skills. I spoke with two Captains who both agreed to try and have me join their crew. But the man who would make that decision sat at a desk in Washington DC. The Submarine Auxiliaryman Detailer is tasked with placing people in their next assignments. When I tried to talk to him about trying to stay in the Bangor area, he was not impressed by my logic or needs. In fact, he said at one point, “I really don’t give a shit what you want Chief, you will go where I send you.” I tried to point out how silly it would be to send me back to Hawaii knowing that I would eventually promote and go all the way to Scotland. This champion of the people’s finances famously said: “I don’t give a shit. Its not my money”. 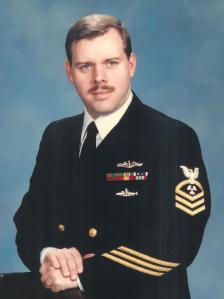 So in March of 1989, we finished packing all of our belongings and started on our journey to the USS Indianapolis which was spending its days tied to the pier in the Pearl Harbor Naval Shipyard. On our way there I got the message that I had indeed been one of the 13 candidates that were selected for Submarine Engineering Technician Chief Warrant Officer (non-nuclear). My commissioning date would be July 1, 1990 assuming I didn’t do anything stupid between the day I left and the day of commissioning.  But you do know that to this day I still have a special place in my heart for the idiot that sent me all the way to Hawaii for fourteen months. And it was my third tour there.

When I showed up to the boat, I found out that the boat had been in the shipyard for a very long time. For a number of reasons, she just couldn’t break the bonds from the yard and the crew was feeling the effects. Don’t get me wrong. They were great people. Some of the best. But they had been dealt a bad hand and the stress was pretty evident.

The guy who was the A division chief before I arrived was in trouble. He was very inexperienced and had some leadership skills that still needed to be developed. The people in the division were aware of his limitations and did like any sailors would do. They rode him hard. In the end, he was relived and that is the main reason I was sent back to Pearl Harbor.

It was tough at first. The guys were not used to a leadership style that held them accountable. I had been a bit of a hard case as a sailor growing up so knew all of the tricks. I could anticipate their actions before they had even finished them and didn’t put up with any nonsense. I made some key changes in LPO and started working with the guys on making sure they knew that they were in the Navy. I spend a lot of time working with them and building them back up as a team instead of as a fractioned group. Debbie was a great help. She became the surrogate Mom and we had holidays at our house and provided them with the support they needed for all parts of their lives.

A couple of the guys were very special. One of them had been put in a box by the previous Chief and was not living up to his potential. He and I worked on that and he went on to not only have a distinguished career. Several of the boys later went on to become Chiefs themselves.

We grew as a team.

I had others on the boat who helped me personally and grew as leaders. I learned as much from them as hopefully they learned from me. They eventually all worked hard to make the Indy a fine sea going unit once more and they traveled the Pacific doing their mission.

My favorite memory was the night before my commissioning ceremony. This amazing group of men in my division and from the boat’s other division had secretly worked behind the scenes to purchase a sword for me for my commissioning. They asked Debbie to being me to the Enlisted Man’s Club on Sub Base Pearl the night before and one of them brought out the box with the sword in it. I was nothing short of stunned. To be honest, when I first got there, I thought some of these guys would hate my guts forever.

I am forever grateful for the circumstances that took me back to Pearl and to the Indianapolis.

My Dad had been scheduled to sail on the original USS Indianapolis on her last voyage in 1945 and his orders were changed at the last minute by a fluke. If he had made the trip, I might not have been alive to serve my country. I think about that every once in a while and wonder if I was just completing his tour.

By the way, the sword has a new home now:

This very fine Ensign demonstrated leadership and inspired me to pass the sword on to another leader.

That’s her Dad but Mom was Navy as well.