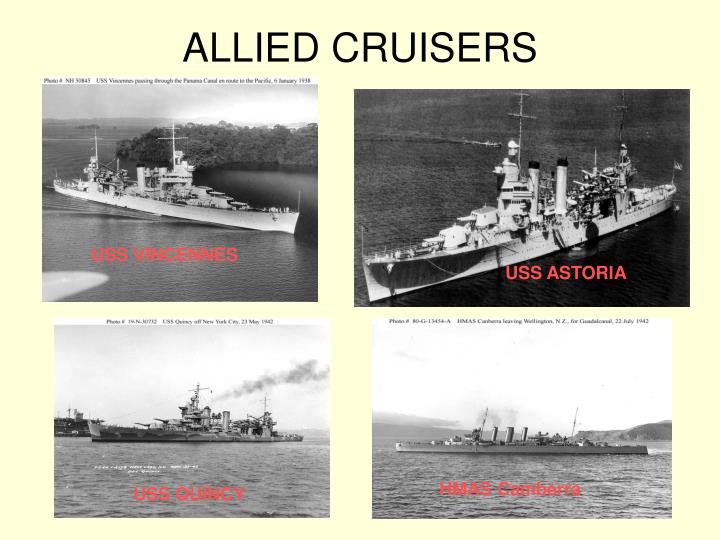 The enemy had ceased fire on the Vincennes group about 0215, and headed out to sea, briefly engaging the Ralph Talbot about 0320-23. Within half an hour both the Quincy and the Vincennes had gone down. The Canberra remained afloat until morning, when she was sunk by our own destroyers, and the Astoria finally succumbed to her wounds about noon.

No one in our forces, however, could know that the Japanese had completely withdrawn and that their entire effort had been thrown into the half-hour between 0145 and 0215. When at about 0235, while the Quincy was going down, flares were dropped over Florida Island, evidently to silhouette our transports off Tulagi and Gavutu, it seemed likely that more action was yet to come. Consequently “alarms and excursions continued until dawn, and it was only with daylight that the enemy’s retirement and our own situation became clear. 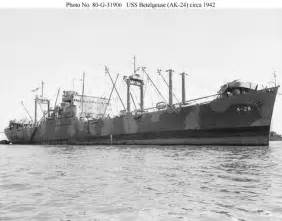 Back at XRAY, as soon as the first flares appeared, unloading ceased, boats cast off and headed for the beach, and all ships were darkened and got underway promptly. Under cover of darkness and rain, they moved out Lengo Channel to the eastward at about 10 knots. Some reports indicate that this was done without orders, but the truth seems to be that some of the ships failed to receive the orders issued and merely followed the others. There was great tenseness as our ships laid to, expecting attack momentarily and knowing that it would be difficult to distinguish friend from enemy. The Betelgeuse diary records that “all ships were covered at all times with our guns in case they turned out to be enemy. It is most remarkable that none of our ships in the transport group fired on any other ship during the entire period, although all ships must have had each other covered and the slightest mis-move on anyone’s part would have caused much indiscriminate firing.”

The minesweeper Hopkins, on which was the Commander of the Minesweeper Division, offers an example of the confusion which prevailed that night. After receiving from the Task Force Commander a dispatch which could not be broken down, the Hopkins could not again contact the Commander. She then failed to find the transports near XRAY. She next stood out around the northwest corner of Guadalcanal, the Task Group Commander having “received no information as to existing situation, the intentions of TFC, the disposition of own or enemy forces. He was unable to make contact with any transports and was doubtful as to the Hopkins’ position . . .” A request for a verification of the dispatch resulted in another cypher to which the Hopkins had no key.

Admiral Crutchley on the Australia had very little more success in obtaining a picture of the situation. After his midnight conference he had decided not to return to his southern cruiser group. The Australia had just begun a patrol of her own within the destroyer circle at XRAY when the flares were dropped over the beach and gunfire was seen near Savo. Admiral Crutchley at once ordered the Australia to a position about 7 miles west of XRAY to patrol on courses 060°-240°, in order to be in a position to intercept any of the enemy who might break through our cruisers. At the same time he ordered those of our destroyers not engaged to concentrate on the Australia in this position. This order, however, was sent out in a cypher not generally understood, and most of our destroyers proceeded to concentrate at the previously assigned rendezvous 5 miles northwest of Savo.

Meanwhile Admiral Crutchley was able to obtain only the most fragmentary news of the action. The Chicago reported her damage and that the Canberra was burning near Savo, but nothing could be learned of the Vincennes group. At about 0500 Admiral Crutchley, acting upon orders from Admiral Turner, instructed the Commander of Destroyer Squadron FOUR to investigate the condition of the Canberra and Patterson (it was believed the latter might have been damaged) and to abandon and destroy them if they could not join in the withdrawal planned for 0630. At 0545 the situation remained obscure, and Admiral Crutchley sent a message to the escort forces ordering them to be prepared to give battle at dawn near the transports.

Two of our destroyers, the Ellet and the Henley , were stationed off Tulagi. The Henley received Admiral Crutchley’s order to concentrate at 0206, deciphered it correctly, and attempted to join the Australia. She failed to find the cruiser, however, nearly collided with the Mugford, wandered about in the heavy rain and fog for several hours and finally turned to the XRAY area about dawn. On the way toward the beach she made sound contact with a submarine and dropped depth charges without positive results. 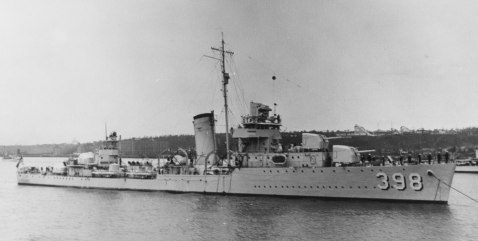 The Ellet had received Patterson’s warning of strange ships entering the harbor and saw the gunfire which followed. As the transports seemed safe within Tulagi inner harbor, the Ellet closed the scene of action at once. “Ceiling was low, visibility was reduced by moderate rain. Identification of own and enemy force was difficult.” The action was over before she arrived. Upon approaching a burning ship, she found it was the Astoria and began to pick up survivors who had been forced overboard, shortly moving along to rescue survivors from the Quincy. Before 0700 she had picked up nearly 500 officers and men. Of the destroyers stationed at XRAY, Dewey and Hull appear to have remained in the vicinity through the action. The Mugford, however, upon seeing gunfire to seaward, lighted off two more boilers and headed for the destroyer rendezvous at 25 knots. This was about 0210. After steaming a few minutes she encountered (and nearly collided with) the Henley. After some time near the latter and after some conversation with ComDesDiv SEVEN, Comdr. Robert Hall Smith, the Mugford moved on toward Savo. She passed men in the water before reaching the rendezvous, where she found the Selfridge.

That destroyer, with ComDesRon FOUR (Capt. Cornelius W. Flynn) aboard, had received Admiral Crutchley’s message shortly after 0200, misunderstood it as an order to concentrate northwest of Savo, and headed northwest at 20 knots. On the way she passed the burning Astoria and men in the water. After waiting at the rendezvous for a while, she saw the Mugford come up and fall in astern. The Helm and Wilson were also present. The Selfridge was returning to the transport area when she was ordered to stand by the Canberra. Upon arriving in the vicinity of the cruiser at 0640 she found the Patterson already removing personnel. 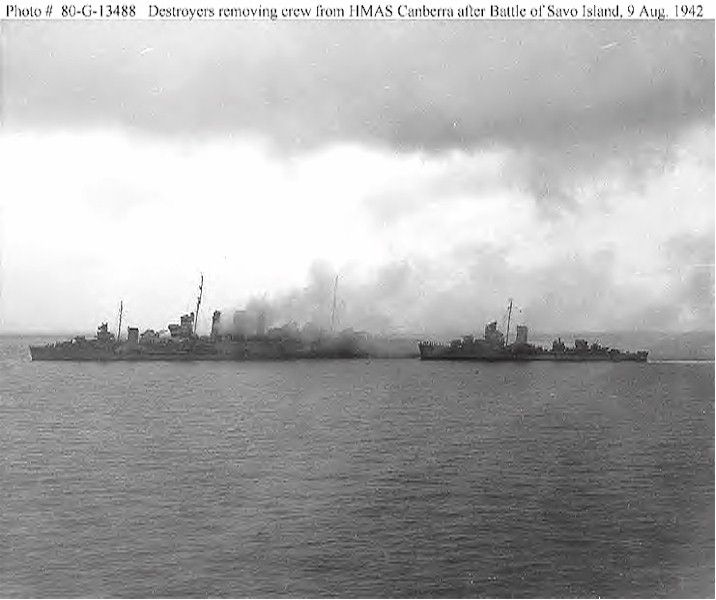