I was looking at my desk calendar and noticed that today (February 1) is National Freedom Day. I have never really paid much attention to anything in February other than President’s Day, Valentines Day, and Groundhog day. President’s day of course is a made up holiday that neither falls on Washington or Lincoln’s actual birthday but you do what you have to with what the government gives you.

So what is National Freedom Day? It’s a day to recognize the signing by Abraham Lincoln of what would become the 13th Amendment freeing all of the slaves in the United States of America. The amendment didn’t get accepted until December 1865 but from most accounts, Lincoln viewed his signing as the event which would finally put to rest the inequality of the past. He didn’t live long enough to see it enacted of course.

The holiday itself was something that a former slave spent many years lobbying congress for. Richard R. Wright was a 9-year-old enslaved boy living in Georgia when Lincoln signed the joint resolution.

After the war, while attending a freedmen’s school during Reconstruction, he became known as the source for yet another once celebrated poem by Whittier, this one entitled, “Howard at Atlanta,” about the visit of Union general Oliver O. Howard to a black school:

RIGHT in the track where Sherman
Ploughed his red furrow,
Out of the narrow cabin,
Up from the cellar’s burrow,
Gathered the little black people,
With freedom newly dowered,
Where, beside their Northern teacher,
Stood the soldier, Howard.

He listened and heard the children
Of the poor and long-enslaved
Reading the words of Jesus,
Singing the songs of David.
Behold!–the dumb lips speaking,
The blind eyes seeing!
Bones of the Prophet’s vision
Warmed into being!

Transformed he saw them passing
Their new life’s portal
Almost it seemed the mortal
Put on the immortal.
No more with the beasts of burden,
No more with stone and clod,
But crowned with glory and honor
In the image of God!

There was the human chattel
Its manhood taking;
There, in each dark, bronze statue,
A soul was waking!
The man of many battles,
With tears his eyelids pressing,
Stretched over those dusky foreheads
His one-armed blessing.

And he said: “Who hears can never
Fear for or doubt you;
What shall I tell the children
Up North about you?”
Then ran round a whisper, a murmur,
Some answer devising:
And a little boy stood up: “General,
Tell ’em we’re rising!”

O black boy of Atlanta!
But half was spoken
The slave’s chain and the master’s
Alike are broken.
The one curse of the races
Held both in tether
They are rising,–all are rising,
The black and white together!

O brave men and fair women!
Ill comes of hate and scorning
Shall the dark faces only
Be turned to mourning?–
Make Time your sole avenger,
All-healing, all-redressing;
Meet Fate half-way, and make it
A joy and blessing! 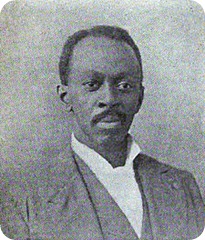 The law Wright lobbied for went into effect on June 30, 1948 when President Truman signed Public Law 842, establishing “National Freedom Day” into the federal code. The final legislation encouraged national observance of February 1st as a way to commemorate the abolition of slavery, but did not mandate a new federal holiday. Unfortunately, it was thought that there were already too many federal holidays during the short month of February to add one more day off.

A lot of blood was shed that lead to the freedom and recognition of a new American dream. 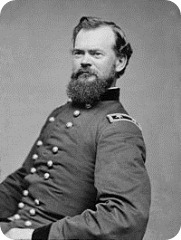 But I will not do so until the people who have taken General James Birdseye McPherson Square hostage leave and go back to whatever hole they crawled out of.

He is the real hero of Atlanta

Just a question: Do you think the current administration and current “Justice” (?)Department would be as passive if the protesters were out there desecrating monuments dedicated to Mr. Wright?

What do you say Mr. President?