Getting from one place to another has always been a core competency of human kind. Man has made an evolutionary journey since the earliest recorded times on how to accomplish the journey more efficiently. Stars were pretty useful once the early navigators figured out that they moved around. Understanding their movement was a science (remember they once thought the earth stood still and was flat). As man’s knowledge increased, so did his methods for understanding that the stars were probably not moving at all and in fact appeared differently to different parts of the globe at any given time.

The problem with stars has always been that on really cloudy nights and especially during storms, they are virtually useless in keeping a ship out of danger. The use of a sextant was very dependent on measuring the location of the stars so dead reckoning would be needed until the sun or the stars returned. Along the way the compass was discovered. It was actually first documented in Chinese literature but since the Chinese felt that they were in fact the center of the universe, the compass quickly became a notion and eventually ended up as a diagnostic tool for Feng Shui and fortune tellers.

Later, the Chinese actually did create a useful compass for navigation simultaneously with a number of other countries and cultures. This created the usual fal dara between cultures about who was first but the matter passed into into obscurity as people actually started to use the inventions to discover how limited our vision had previously been.

Compasses led to the development of better and more accurate maps

These maps not only created a way for vessels and people on land to travel more efficiently but gave people an indication of dangerous challenges along the way. Mariners were warned about rocks and shoals, caravans were able to determine areas where bandits and thieves were laying in wait, and armies could avoid rough terrain in their travels from place to place. 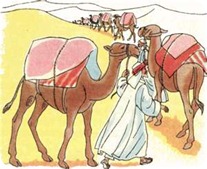 Map innovation has gone through many stages too over the years. All of us have probably used a modern day map that we got from AAA or a store in order to accurately plan our travel. As the country has grown, more and more roads and cities have needed to be added. There is nothing more frustrating that finding that the map you are using has not included a brand new shopping center that has been built smack dab in the middle of your previously unencumbered trip.

In today’s day and age, you have a seemingly endless choice of ways to get from point A to point B. The internet has brought us many “compasses” that can detail the trip, the obstacles, hotels and motels, restaurants and comfort stops (even down to the number of stalls in the men’s room I suppose). You can get ratings from previous customers in addition to normal references from professional guides. The only thing the internet can’t do is travel with you. Unless of course you have GPS.

The girl who talks to you will tell you how to start, every left and right, all of your approaches and she does magic with her picture screen as well. If you screw it up by ignoring her advice, she is very forgiving and will tell you that she is “recalculating”. God Bless her. Depending on the model, GPS can also get you to amazing places like restaurants and theaters.

A standard throughout modern history for navigational maps has been to indicate places that could be dangerous for the traveller. The Notice to Mariners is published frequently and indicates areas where physical dangers and man made dangers could exist. Old bombing ranges, shipwrecks, sea mountains and so on are identified as best as possible. Can you possibly imagine how many wrecks and incidences would occur each day if there were no warnings.

Once upon a time, Mrs. Mac and I were travelling from our home in Indiana to Chicago for a business conference. This was a special occasion since wives were allowed to come and the season was right for an enjoyable visit. At that time, we did not have access to a GPS so we used Yahoo maps. It gave us turn by turn details. I had been extra harassed at work so didn’t sit down to do my idiot check. The impact of this lack of foresight fully dawned on us as we entered the South Side of Chicago (most direct route). We have travelled all around the country and many places in the world. I have to tell you that I have never seen a more devastated landscape. 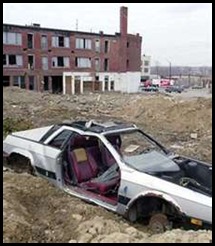 As we tried to carefully navigate through the maze of streets (or what used to be streets), the local folks looked at us with sheer amazement. It was almost as if they were saying “Hey look, some body forgot to validate his Yahoo map and is now discovering our unique culture!” (Or something like that) And friendly? Why, many of them waved and even indicated we should stop the car and come over for a quick chat about the natural beauty of their surroundings. Making the task of getting into the actual city difficult were a number of burned out vehicles that blocked the streets we were supposed to be turning on. Its almost as if someone planned the challenging obstacle course.

I’ve talked about fear recently but have to admit that until that moment, I only thought I knew what fear was. I was never so happy to see green grass again as we managed to move slowly north and eventually the barbed wire and bars on the windows slowly thinned out. We got the map out for the trip home and discovered that the skyway lets you go completely above the “zone”. It was worth every cent.

The buzz today comes from some folks in Texas worrying about a new “Ap” for their phones and computer toys. This Ap will apparently warn travelers about areas to avoid. Having had a unique experience in my past, I automatically said, sign me up. The local NAACP however is up in arms about this.

“I’m going to be up in arms about it if it happens,” said Dallas NAACP President Juanita Wallace.

Wallace spent her afternoon at a rally on Martin Luther King Jr. Blvd. and said she felt safe there, but fears the app may project otherwise.

“Can you imagine me not being able to go to MLK Blvd. because my GPS says that’s a dangerous crime area? I can’t even imagine that,” she said.”

I am not sure if Juanita understands the limitations of GPS at this point. I am fairly sure that even the most sophisticated unit will not actually prevent you from going someplace.

More from the article:

Michael McNally, who was visiting Dallas Tuesday, said an app shouldn’t have enough power to label a community.

“It may have a high crime problem but have some great cultural, social things you can do there,” McNally said.

I will have to do some additional research on this stimulating idea. Maybe afterwards another trip through the South Side. Or maybe not.

I don’t think Juanita has heard but there are actually a number of web sites that can tell you interesting places to avoid if you are unarmed or otherwise disinclined to become a wealth redistributor. There is one for every state but here is an example

From the map you select the city and it will take you to another map with statistics. Click on Lancaster PA for a specific example.

You may want to reconsider your night out. The map I looked at today was from a weeknight. In winter. With no major events going on. 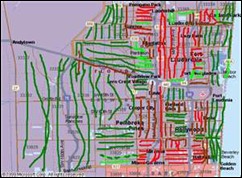 I know that being progressive is supposed to make us all more open and full of tolerance. But I honestly hope that the people who are working on this Ap don’t get sidetracked. Personally I think it might be kind of a good thing to have.

One last point. If the election this year goes to a Republican and you find yourself in your car on the corner of Martin Luther King Street and Barrack Obama Blvd. you may want to get your GPS recalibrated. Especially if you have a “Nobama” sticker on your vehicle.