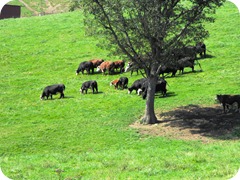 After living near the sea coast for most of my life, living in farm country is a unique experience.

What’s particularly interesting is that we live between several large chocolate companies and a number of farms. Inside the house, you can see the weather rolling in from a number of directions. But you really have to go outside the house to experience living here. The wind changes directions from time to time and you get an opportunity to fully engage all of your senses.

Sometimes you will get overwhelmed by a rolling wave of chocolate

. We watched War Horse in the theatre not long ago and one of the scenes where the soldiers in the trenches were gassed. Not to make light of it (and my deepest apologies if there are any WW1 guys reading this story) but I think we could have accomplished a lot more with the chocolate gas attack in a more humane manner. What happens is you are instantly hungry for chocolate. Any kind of chocolate. You involuntarily start taking deep breaths and forget that you were sent out back to fill the bird feeder. For a short time, you are disoriented and unable to make critical decisions. 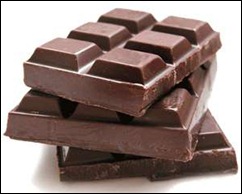 Not to worry, the effect passes soon enough. But it is kind of funny watching the cars in town with their windows rolled down on days when even the dogs don’t want to go out due to the chill in the air.

Other times though, the wind shifts.

Now I paid attention in school and I am fully aware of where chocolate comes from. You need beans and sugar. Apparently you also need milk and lots of it which explains the farms. When the wind shifts and you have not prepared yourself for it, the affect is opposite of the chocolate feelings. You suddenly minimize your breathing and try to imagine yourself on a beach chair in the Bahamas. Anything to take your mind off of the overpowering stench that has now permeated your neighborhood. 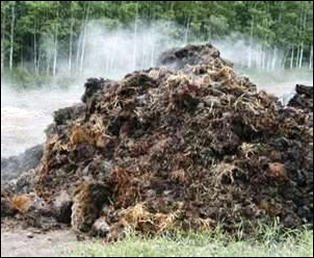 The good thing is that neither smell lasts very long

.It’s just as well since we found out the hard way that either neutralizes Angus and Rufus’ sense of smell. Normally that wouldn’t be such a big thing but it can have a negative impact on all of us during skunk season. After two experiments, I am hoping both boys will refrain from playing with the black kitty with the white stripe that visits the back yard.

Being in God’s country teaches you natural lessons you wouldn’t think of much on a submarine. Something really good (chocolate) comes from something that is really bad. You really can’t have one without the other. There was a system put in place long before we arrived that makes the whole food circle operate. Even though we are responsible for making it a bit more organized, in the end you still find yourself with a large stinky pile of manure to deal with. 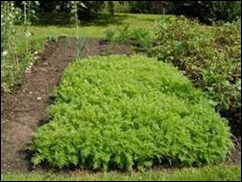 Even the humble manure pile does play a role.

As we have discovered before planting season, the piles grow smaller and smaller and there are a lot less “chocolate” days. The strength of the manure is that it gives back to the land. Giving something unpleasant back to the land serves a purpose too. The rain and sun add a helping of goodness and the gloopy mess finally leads to the fantastic array of green fields. This leads to a number of things including food for those wonderful cows that are doing their best to fill up the chocolate aisle in the supermarket. They do all of that just for you and I. 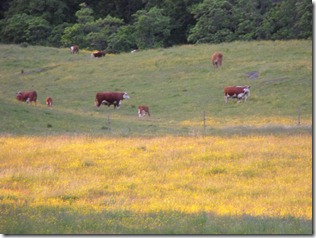 As much as we would like to make the manure go away, it is a part of who we are.

We need it to remind ourselves that although perfect things can come from the world, they often come from imperfection. You may hide a pile of manure, but another thing I have learned is that you still know its there. Why not just recognize its role, hold your nose and just move along. The earth will do the rest.

One other thing I have learned from the farms is that a pig is still a pig no matter what you call it.

You can try to upgrade him a bit with a fancy name or a cute bandana. You can even tell people “Isn’t my dog lovely?” But he is still a pig. He may learn a few tricks but he will still have pig behaviors, eat pig food, and yes, give you a lovely pile of pig poop for all of your efforts.

I like to think that my blog is a place that I can point out the manure as well as the chocolate.

It has a fair share of chocolate (based on almost 20,000 views). It also has its fair share of manure spreading which in my mind is a way of venting about the state of the farm that affects every part of all of our lives. Some people are just going to smell the manure no matter how much chocolate I bake. I imagine they just don’t come back.

I also point it out when I see a pig

I refuse to call them dog’s no matter how many times MSNBC says “Oh look, a puppy”. While I have no personal grudges against domestic pigs, I still refuse to acknowledge something with a human sounding name that I will eventually consume. 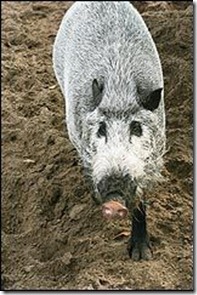 They have grown up in a place that I am unable to verify. Their parental line is obscured and often mysterious. They are pushy and bossy and try and dominate the domestic pigs that have manners. They disrupt things and frankly add very little value to the farm. I am not even sure I would want to consume anything from a feral pig.

Across the country right now, feral pigs are running wild and causing untold damage to the environment. They are invasive and ruin the habitats for the turkey, grouse, deer and other critters by rooting and digging up the soil. Feral pigs are the kings of fundamental change. 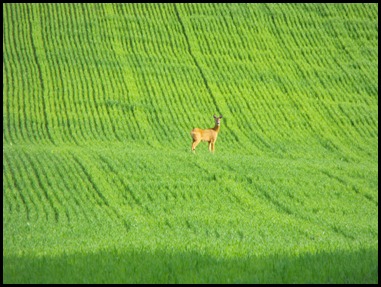 They will eat nearly anything: tubers, roots, stems, leaves, fruit, bark, and their favorite — acorns — competing for mast crops with native wildlife. They also eat bird eggs and trample and kill native birds. They kill both domestic and native animals (even lambs). I have even heard recently that they have begun eating lobster. A lot of lobster.

If you want to read more about how feral pigs are damaging this country, here is the link:

An organization I belong to recently sent out a note to remind us that as military people (past and present) we should respect our troops. I was good up until that point. Then the person who wrote it started a diatribe about including the Commander in Chief in our respectful nature. Insults and bad things are not acceptable and will be deleted.

No discussion, no critical thought, no choice.

Well, if you have made it this far, I want to reassure you of a few things. You almost always find interesting things when you turn rocks over. You fail to grow if you have a sanitary enclosure around you because life’s most unique surprises are often hiding under a pile of manure. 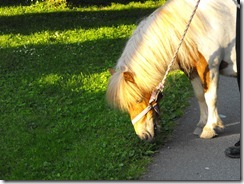 And you are only fooling yourself if you think you can magically turn a pig into a pony. Especially the feral kind.

I’m going to keep writing the blog exactly as I have to this point. (or hopefully a bit better as time goes by) In the Fall this year, I intend to join many others who feel its time to eradicate feral pigs. Hope to see you there.