The Story of the Nautilus and the Nuns – New Years 1943

Eighty years ago this week, the submarine Nautilus shifted from her incredible role as a hunter killer to perform a mission of mercy. This is the story about the rescue of twenty nine refugees including four American nuns who became stranded behind Japanese enemy lines during World War II.

The Nautilus was originally named and designated V-6 (SF-9), but was redesignated and given hull classification symbol SC-2 on 11 February 1925. Her keel was laid on 10 May 1927 by the Mare Island Naval Shipyard of Vallejo, California. She was launched on 15 March 1930 sponsored by Miss Joan Keesling, and commissioned on 1 July 1930. 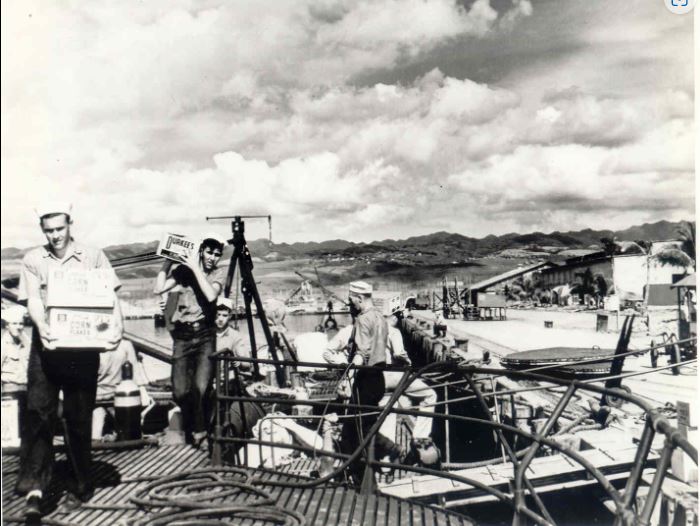 She was being refit in Mare Island during the Pearl Harbor attack but was ready by the time the Battle of Midway occurred. Her exploits included a daring raid on Makin Island landing a party of Marine Raiders. But this mission was certainly nothing the men had been prepared for.

Two of the Sisters were teachers, and two were nurses. They had arrived in the Solomon Islands in December 1940. These young women were new to missionary life, confronting an unknown culture for the first time, and did not speak the languages spoken on the various islands. Also, they had to learn how to get around the jungle. One year after they arrived, the Japanese attacked Pearl Harbor.

The Japanese quickly occupied many of the islands in the South Pacific. The nuns had been deeply involved in a village on the island of Buka. They had no idea that the Japanese wanted Buka for an airfield.

Sister Hedda Jager was the nun in charge of journaling their experiences. No matter what kind of day she was having, she always managed to record the day’s happenings.

As the Japanese get closer and closer, Sister Hedda records how their lives morphed from working as missionaries to being filled with sheer terror. They made it to Bougainville where they learned how other missionaries in the Solomons had been tortured and executed.

There were Marist missionary priests on the island and, knowing what the fate of the nuns would be if captured, they managed to hide the Sisters for months in the jungle. On New Year’s Eve 1942, the priests managed to get the Sisters and 25 others to the beach in Teop Harbor. It was then they all learned that a submarine would be their means of rescue.

A Number of Ladies

The next day, and for several days thereafter, the United States submarine Nautilus patrolled the coast of Bougainville. Lieut. Comdr. William H. Brockman Jr. was looking for a fat target but received instead a message from Adm. Bull Halsey’s headquarters ordering him to proceed to Teop Bay on the northeast coast of Bougainville to evacuate some civilian personnel.

“How many women can you take care of?” Lieut. Phil Eckert, the communications officer, asked Ensign Davis, the commissary officer.

Davis, Eckert and Bill Brockman were in for a surprise. Waiting at a mountain village named Tsipatavai, or soon to arrive there, were 14 missionary nuns, four other women, three young girls, two priests, five planters and the Austrian manager of a plantation‐29 refugees. They had been rounded up by the missionary priest, Father Albert Lebel of Brunswick, Me., with the aid of Jack Read, the coast watcher on northern Bougainville. (Read’s laconic messages, “40 bombers heading yours,” were a legend in the South Pacific).

Bishop Thomas Wade had put Father Lebel in charge of evacuating the nuns after four missionaries were executed on Guadalcanal, and in November Father Lebel had set out to rescue two priests and three nuns whom the Japanese had under guard at a mission on the northern tip of Bougainville. He led a party of natives 30 miles through the jungle to Read’s station, then across the island to the mission, where they discovered that the sentries had taken the night off. Sister Claire and Sister Remy were unable to walk so natives carried them on cane chairs lashed to poles. Sister Henrietta followed on foot. They fled through the night, arriving at Tsipatavai the next day.

There they were joined by four middle‐aged Sisters of St. Joseph who had been on Buka since 1940—Sister Mary Isabelle Aubin of Newport, Vt.; Sister Mary Celestine Belanger of Lowell, Mass.; Sister Mary Heda Jaeger of Saskatchewan, and Sister Mary Irene Alton of Hunting- ton Beach, Calif. From Soveli, 90 miles to the south, Father Richard O’Sullivan brought four Maris? Sisters.

Read kept trying to arrange an evacuation but the answer was always the same: no planes or ships available. Finally he asked permission for Father Lebel to appeal directly to Halsey but they were still awaiting an answer on the day before Christmas when the Japanese raided Tinputz a few miles away. The three nuns there escaped to Tsipatavai. Father Allotte and Brother Gregor hid in the bush.

Father Lebel interrupted midnight mass to say the refugees must run for the hills at once. With Sister Henrietta carrying a lantern they headed into the mountains, crossing great gorges, climbing all night. On Christmas Day word came that the Japanese had departed but they stayed in camp another night, singing carols under the stars.

It was Dec. 26 when Father Lebel got to send his message to Halsey: “Urgently request immediate evacuation of American women from Bougainville. Fear repetition of crimes on Guadalcanal. Teop and Tinputz harbors safe and convenient. Eternally gratefully.” For a touch of clout, he signed Bishop Wade’s name. Two days later Read received word that a submarine would probably be sent. On Dec. 31 he was advised it would “probably” come that night. From Tsipatavai the refugees started for Teop. They were to light signal fires on the beach at 10 P.M.

There was no sign of a submarine. Not at 10 o’clock, not at 11 that New Year’s Eve. Shortly after midnight, voices came faintly over the water. The launch from the Nautilus had capsized on the reef. She was righted and bailed, and the first load of 21 refugees was ferried to the Nautilus at 3 A.M.

On New Year’s Day 1943, in the early morning darkness, the submarine Nautilus pulled to within 100 feet of the beach and the terrified passengers were safely taken on board and brought to safety.

Sister Hedda wrote in her journal: “You cannot put into words the feeling that one has for those of one’s own country, especially when one is miles from home and running away from the Japanese.”

“Real sugar!” said Sister Hedda when she saw coffee and sandwiches prepared by Ensign Davis. “Real salt!” It was 4:41 when the launch returned with its second load, 5:37 when Nautilus submerged and crept out of the bay.

After months of taro and paupau, the passengers had a New Year’s Day dinner of soup, fried chicken and vegetables, including buttered asparagus, peach pie and fruit cake. The typewritten menu had a message: “Happy New Year to All Hands and Guests.”

That night when the sub came up for air, Bill Brockman received a message:

“Congratulations, Nautilus. You were just ahead of the sheriff. Jap destroyer entered Teop harbor shortly after you left.”

Nautilus had received instructions to extract refugees located at Toep Harbor, on Bougainville Island, in the Solomons. The rescue was scheduled to be executed on the evening of the New Year’s Eve 1942, and the morning of New Year’s Day 1943.

On the evening of the 31st she submerged 10 miles off shore and approached the harbor. A small party went ashore to make contact with the evacuees – 17 Australian Coast Watchers and 29 civilians. The civilians included in that 29 were 14 women, 3 children, and 2 elderly priests.

Shortly after embarking, the evacuees were entertained in the crew’s mess hall and served a light supper. Women were given the officer’s quarters and the men had to “hot bunk,” while much of the boat’s crew slept on deck. Brockman found the crew’s treatment of the evacuees to be exemplary and later remarked that it seemed “there was not a thing that the men would not do for them.”

On 4 January 1943, at 0310, Nautilus transferred her passengers to PC-476. Looking at the deck log for the Nautilus that day, it was interesting to read the following line at 0545:

It is reported that two of the ladies who were widows kissed two of the Nautilus crew good-bye.

Got to love those submariners 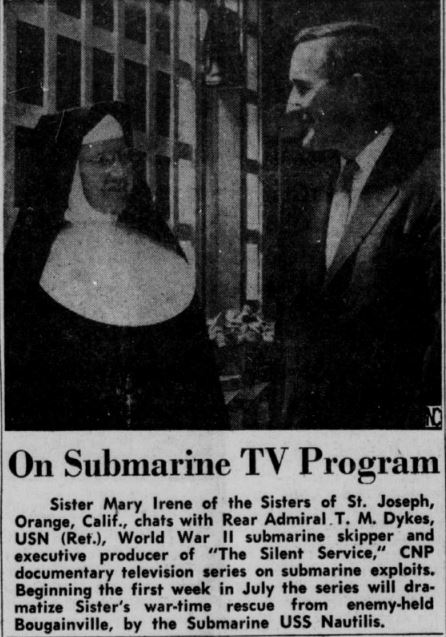 When the war ended the four Sisters returned to Buka to continue their work.

The Nautilus would survive the rest of the war

The Fifteen Year old Nautilus (SS-168), at the Philadelphia Navy Yard, Philadelphia, Pennsylvania, with an impressive war record, has been retired. During her career, she took a heavy toll on Japanese shipping. All fourteen of her patrols were considered successful, a record few submarines could boast of. The crew lines up on her quarterdeck to receive Captain M. Mathewson, Commanding Officer of the Navy Yard, 26 January 1946.

I have given a number of presentations about submarines through the years. Submariners are really nothing more than a microcosm of society when you look at their characteristics and personalities. We came from all walks of life. The spiritual side of many of us in my generation was subdued while we were underway. So people often wonder why I am so ready to offer prayer on a moment’s notice in public settings with little to no preparations.

My answer is always the same.

When you have purposefully spent a good deal of your life on a boat designed by the government and built by the lowest bidder, you have an intimate relationship with the Father at all times.

The first link has some great historical footage of submarine training and operations in World War 2 in the pacific.

The second link will take you to the television story “Nautilus and the Nuns”  It is a glamorized version but has some great scenes that most submariners can relate to.