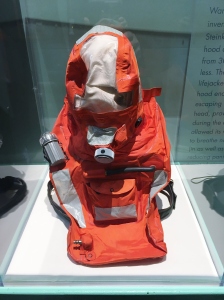 Anyone who has ever sailed on a US Navy submarine probably had at least some idea about the reasons for all the training and emphasis on safety that was given to them. From the beginning of submarine operations in the early 1900’s, diving on a submersible ship in an unforgiving ocean has always had an element of danger. As I often tell people at the start of one of my submarine talks, you never quite forget that you are on a boat that was designed by humans and built by the lowest bidder in many cases. While we like to think that we have the greatest submarine program anywhere in the world, that expertise has come at a high cost over the evolution of the program.

The United States’ S-class submarines, often simply called S-boats (sometimes “Sugar” boats, after the then-contemporary Navy phonetic alphabet for “S”), were the first class of submarines with a significant number built to United States Navy designs. They made up the bulk of the USN submarine service in the interwar years and could be found in every theater of operations. While not considered “Fleet Submarines” in the traditional sense of that term, they were the first submarines in the USN designed for open ocean, blue water operations. All previous submarines had been intended for harbor or coastal defense. These boats were intended to have greater speed and range than previous classes, with improved habitability and greater armament. 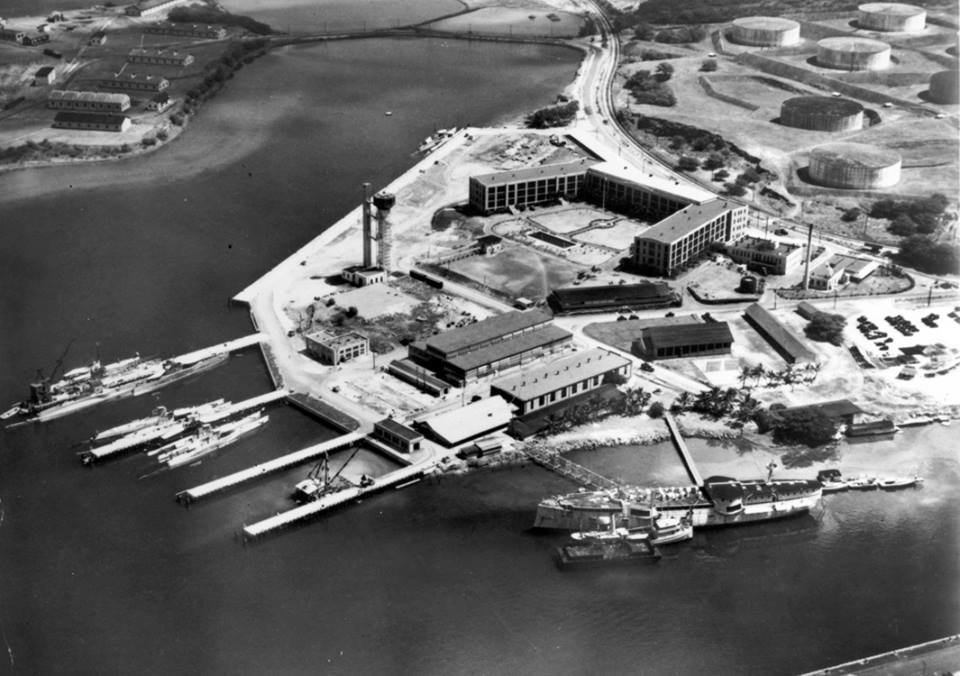 Word of the tragedy that occurred on the night of January 24 did not reach the public until February 7th. Considering how many bursts of bad news were reaching the American public from all over the globe, this had to have been a crushing report. 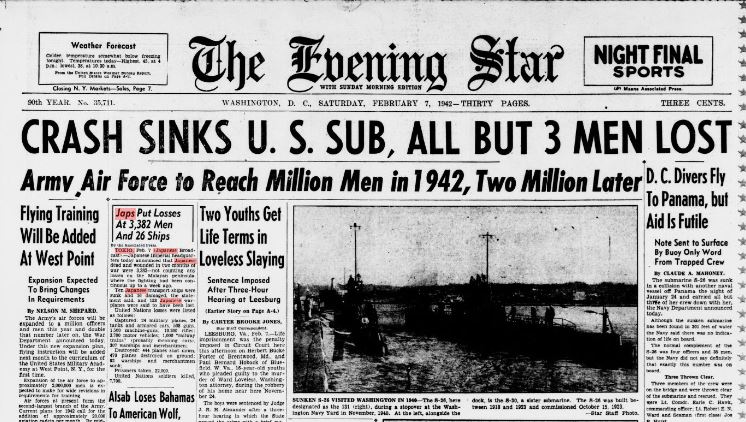 DC Divers Fly to Panama, but Aid Is Futile

Note Sent to Surface By Buoy Only Word From Trapped Crew

By CLAUDE A. MAHONEY. The submarine S-26 was sunk in a collision with another naval vessel off Panama the night of January 24 and carried all but three of her crew down with her, the Navy Department announced today. Although the sunken submarine has been found in 301 feet of water the Navy said there was no indication of life on board. The normal complement of the S-26 was four officers and 35 men, but the Navy did not say definitely that exactly this number was on board.

Three members of the crew were on the bridge and were thrown clear of the submarine and rescued. They were Lt. Comdr. Earle C. Hawk, commanding officer; Lt. Robert E. N. Ward and Seaman (first class) Joe B. Hurst. A buoy which had been ejected from a signal gun was located on the surface containing a message which revealed that the forward and after ends of the submarine which contained the compartments fitted for rescue work with the diving bell were flooded, and that the surviving members of the crew were in the central operating compartment. The Navy explained that owing to the design of the conning tower structure in this type of submarine, it was not possible to use the submarine rescue bell over the central compartment, even if the ship had been located in time. The submarine bell was developed some years after this type of submarine was built. 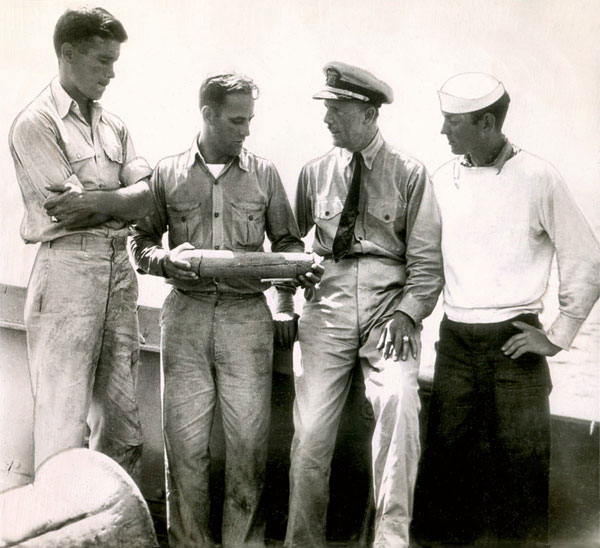 Rescue operations under command of Rear Admiral Frank H. Sadler, commandant of the 15th Naval District, and Capt. Thomas J. Doyle were begun immediately after the sinking the Navy said. Divers were flown from Washington to the Canal Zone to assist the divers already engaged in the operations there. The divers from Washington were Forrest E. Smith, chief boatswain’s mate; Walter Squire, chief torpedo man; G. E. Eason, gunner’s mate; George Crocker, boatswain’s mate; John B. Griffin, carpenter’s mate, and Nell G. Shahan, boatswain’s mate. When the Navy gave up hope of finding life on board the next of kin of the casualties were notified. Salvage operations were continued, however. Built Between 1918 and 1923. The S-26 was built by the Bethlehem Shipbuilding Co. between 1918 and 1923. It was commissioned October 15. 1923. It had a surface displacement of 800 tons and a sub[1]merged displacement of 1,062 tons. It is of the general type used In World War I and is of a newer design than the 0-9 which sank last summer. The Navy said the collision which caused the sinking occurred while the submarine was operating on the surface. While the Navy did not give details of the collision, it was pointed out by persons familiar with submarine operation, that when a submarine is in surface condition, it is much more vulnerable to a collision than when ready for submersion. The blow from the colliding vessel might have hit almost anywhere, they said, except the center where the men assembled after the sinking and from where the buoy message was sent. When a submarine is set for submerging its watertight integrity is much higher than when it is operating on the surface for it then is highly compartmented with closed bulkheads. The craft was 219 feet in length and was powered by two sets of 600 I B. H. P. Nelseco diesel engines. Armament carried by this type of submarine was one four-inch gun and four 21-inch torpedo tubes. It was a submarine of this general type, the S-1, that was experimentally fitted out to carry a small seaplane in a cylindrical tank in 1923.

What happened that night

S-26 (commanded by Lieutenant Commander E.C. Hawk) was lost at 2223 on 24 January 1942 in the Gulf of Panama about fourteen miles west of San Jose Light in three hundred feet of water. There were three survivors, two officers including the Commanding Officer, and one enlisted man-all on the bridge at the time of the collision; the fourth person on the bridge, an enlisted man, was lost.

S-26 was proceeding from Balboa, Canal Zone, to its patrol station in company with S-21, S-29 and S-44 and an escort vessel, PC-460, at the time of the disaster. At 2210 the escort vessel sent a visual message to the submarines that she was leaving the formation and that they could proceed on the duty assigned. S-21 was the only submarine to receive this message. Shortly there-after PC-460 struck S-26 on the starboard side of the torpedo room and the submarine sank within a few seconds.

PC-460 started life as the yacht ELDA, 154′, 380 T., built in 1930 by Consolidated Shipbuilding Corp. in Morris Heights, New York. In 1940 the US Navy acquired the yacht from Mr. Arthur Davis of New York City and converted it to a Patrol Craft for war duty, giving her the designation PC-460. She arrived in the Panama Canal Zone area on 13 November, 1940. She was operating at night with a number of submarines, including S-26, in the eastern (Pacific) approaches to the Panama Canal. The submarines were running on the surface, and PC-460 signaled that she was leaving the group. Apparently, only one of the subs received the message, however. PC-460 turned, cutting deeply into the pressure hull of S-26 and sinking her. Only the three men on the sub’s conning tower survived, being thrown clear. The patrol craft was badly damaged also, and limped from the area, leaving other ships to attempt a rescue/salvage operation.

Salvage operations started immediately under Captain T.J. Doyle, USN, Commanding Submarine Squadron Three and Submarine Base, Coco Solo, Canal Zone; they were not successful. She had previously made one war patrol but had inflicted no damage on the enemy. 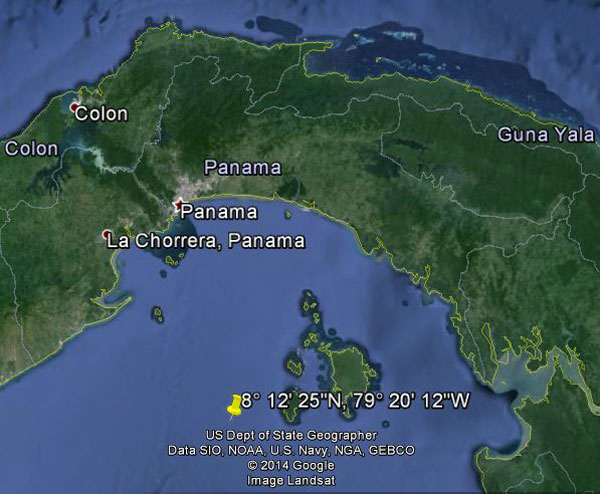 Her hull was not salvaged. The wreck was eventually found and surveyed by the Lost 52 Project. https://en.wikipedia.org/wiki/Lost_52_Project

Lord God, our power ever more,

Divine with our men beneath the sea;

O hear us when we pray, and keep

them safe from peril in the deep.

Lord, guard and guide the men who man

the submarines that guard our land.

Be with them always night and day,

in quiet depths or roaring spray.

O hear us when we cry to Thee,

for those in peril on the sea.

Bless those who serve beneath the deep,

through lonely hours their vigil keep.

May peace their mission ever be!

Protect each one, we ask of Thee.

Bless those at home who wait and pray

for their return by night and day.