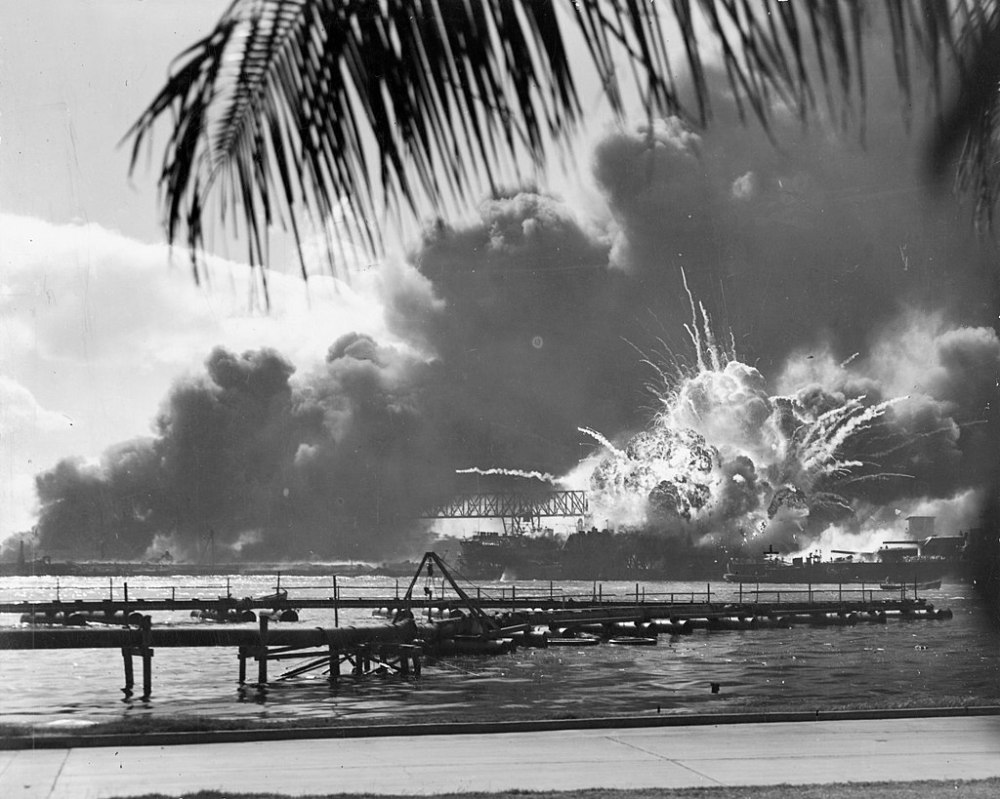 One of the most remarkable pictures captured at Pearl Harbor on December 7th was the spectacular explosion of the USS Shaw which was in a floating dry dock as the attack began. The bomb damage was significant enough to make anyone watching wonder if anything could have survived on that fateful day.

The amazing thing is that not only did Shaw survive, but like the earlier USS Shaw, she would require some major work in order to carry on in her duties. The parallel between the two ships is a bit uncanny. Here are their stories from the Naval Archives: 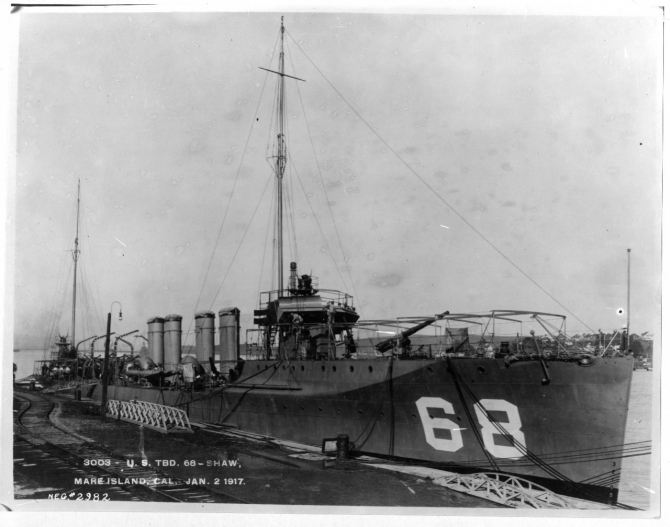 The first USS Shaw was a four-stack destroyer that served honorably in the Great War. She was a consistent fighter that accompanied many convoys across the treacherous Atlantic during some of the hardest parts of the U boat war. But the most memorable part of her story comes from an event that happened on 9 October 1918.

While escorting the British transport Aquitania, Shaw’s rudder jammed just as she was completing the right leg of a zigzag, leaving her headed directly towards the transport. A moment later, Aquitania struck Shaw, cutting off 90 feet of her bow, mangling her bridge and setting her ablaze. Shaw’s crew heroically brought her fire under control, and a skeleton crew of 21 men took the wrecked warship 40 miles into port under her own power. Casualties from the incident included 12 dead and 12 injured. Seventeen members of the crew received commendation from Secretary of the Navy Josephus Daniels for their courage and devotion to duty. 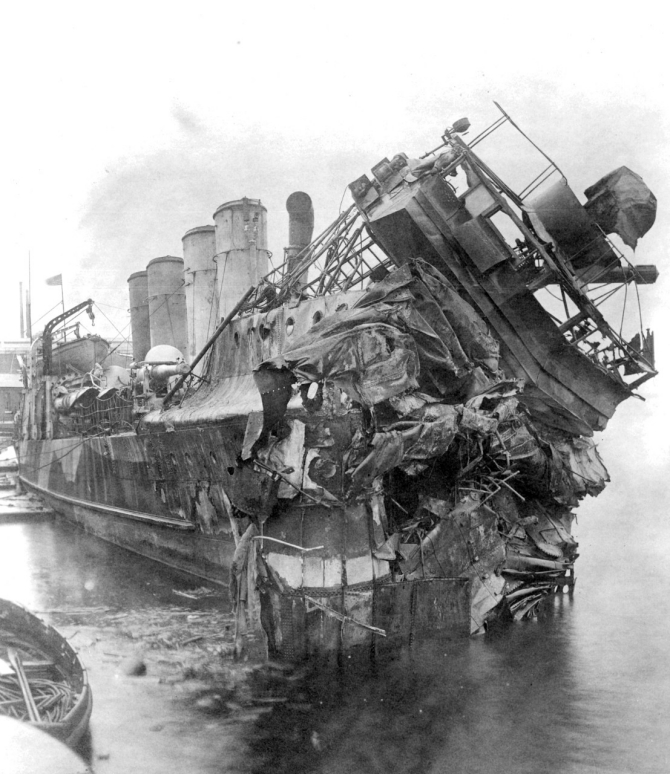 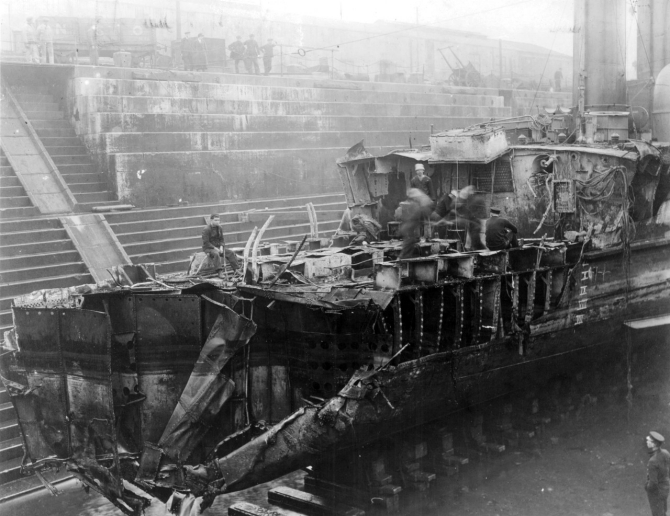 The first Shaw was repaired with a new bow and went on to serve with the US Coast Guard until being inactivated in 1933 for the last time. This inactivation freed up the name for the next destroyer that would carry her legacy forward into the Second World War. 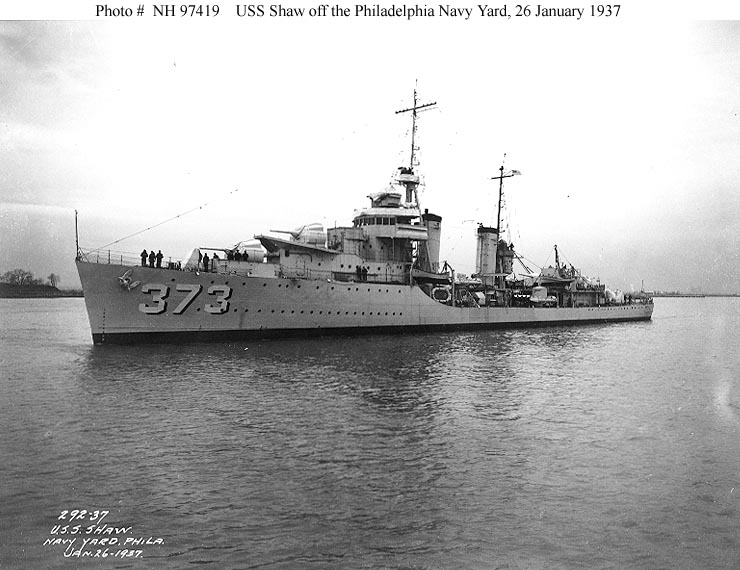 Following commissioning, Shaw remained at Philadelphia until April 1937 when she crossed the Atlantic on her shakedown cruise. Returning to Philadelphia on 18 June, she commenced a year of yard work to correct deficiencies before completing acceptance trials in June 1938. Shaw conducted training exercises in the Atlantic for the remainder of the year. She then transited to the Pacific and underwent overhaul at Mare Island Navy Yard, Vallejo, Calif. (8 January-4 April 1939).

Shaw remained on the west coast until April 1940 participating in various exercises and providing services to carriers and submarines operating in the area. In April she sailed for Hawaii where she participated in Fleet Problem XXI, an eight-phased operation for the defense of the Hawaiian area. She remained in the Hawaiian area until November when she returned to the west coast for overhaul. 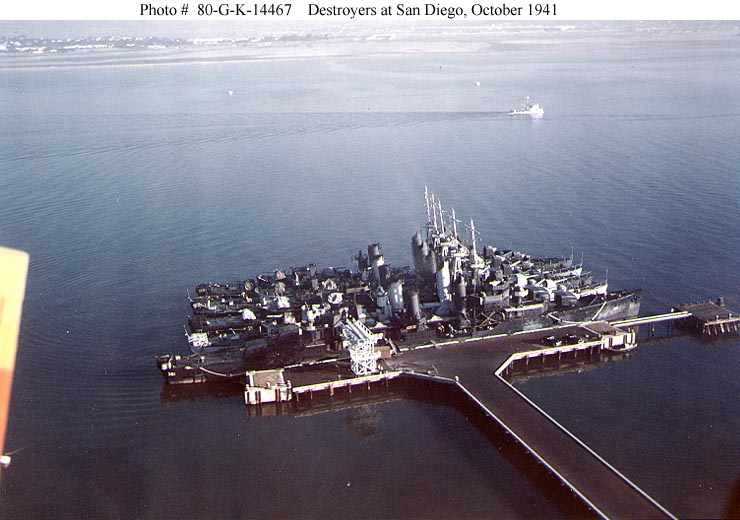 Back in the Hawaiian area by mid-February 1941, Shaw operated in those waters into the autumn. Involved in a collision with the oiler Sabine (AO-25) on 21 November, she subsequently entered the Pearl Harbor Navy Yard for repairs, drydocking in YFD-2 along with the harbor tug Sotoyomo (YT-9). 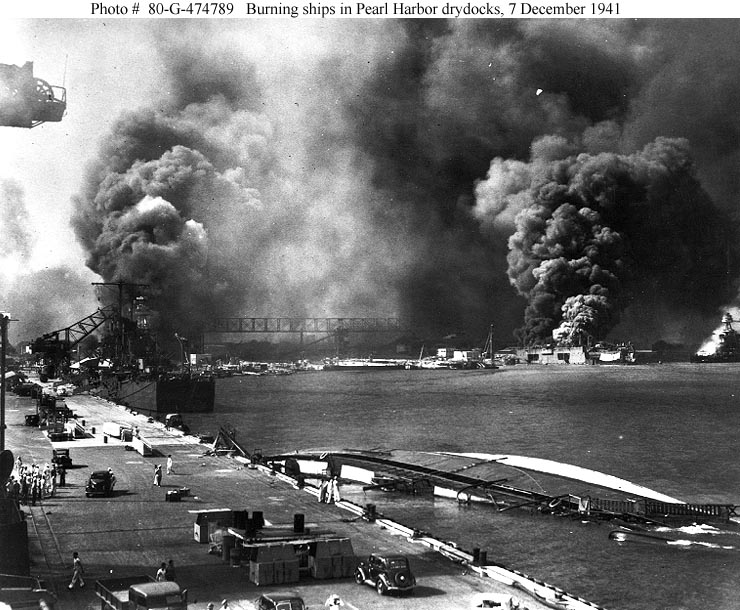 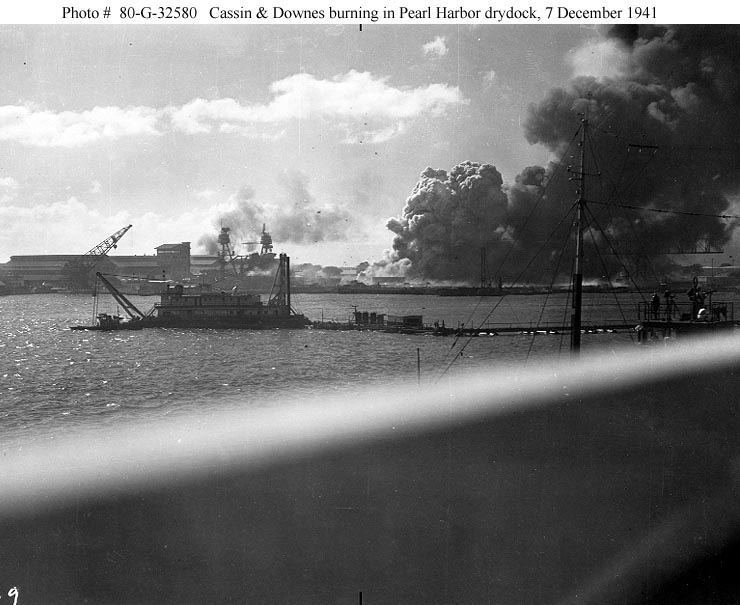 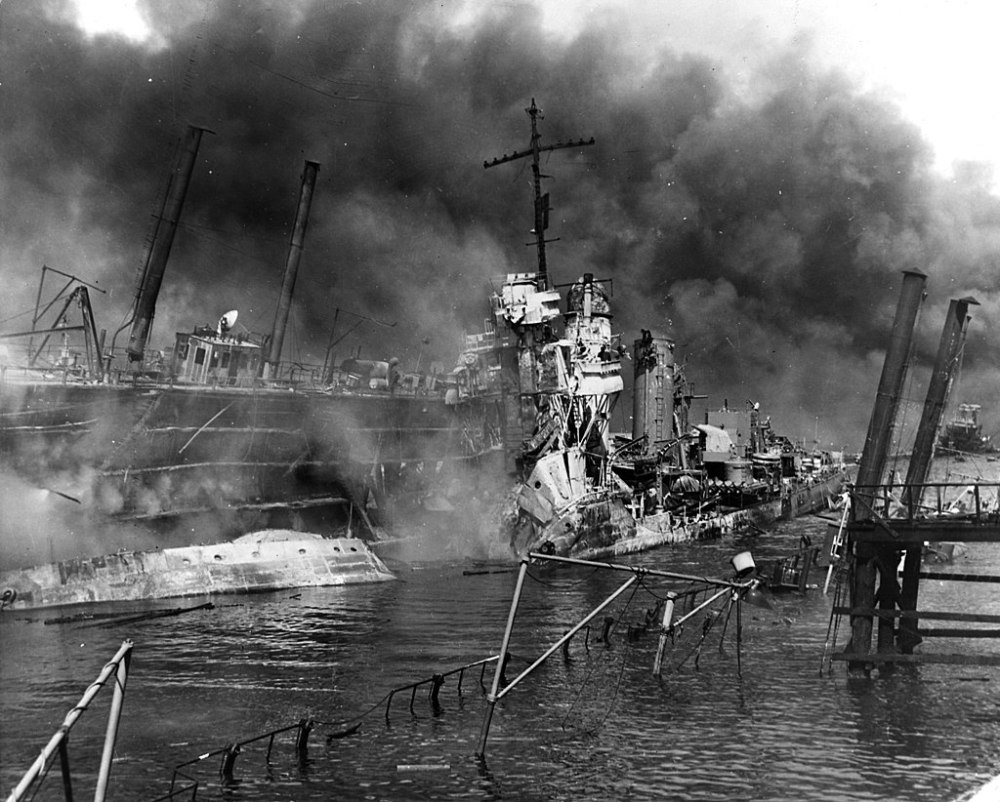 On 7 December 1941, Shaw still lay drydocked in YFD-2. During the Japanese attack, she took three hits: two bombs through the forward machine gun platform, and one through the port wing of the bridge. Fires spread through the ship. By 0925, all firefighting facilities were exhausted, and the order to abandon ship was given. Efforts to flood the dock were only partially successful; and, shortly after 0930, Shaw’s forward magazine blew up.

Temporary repairs were made at Pearl Harbor during December 1941 and January 1942. 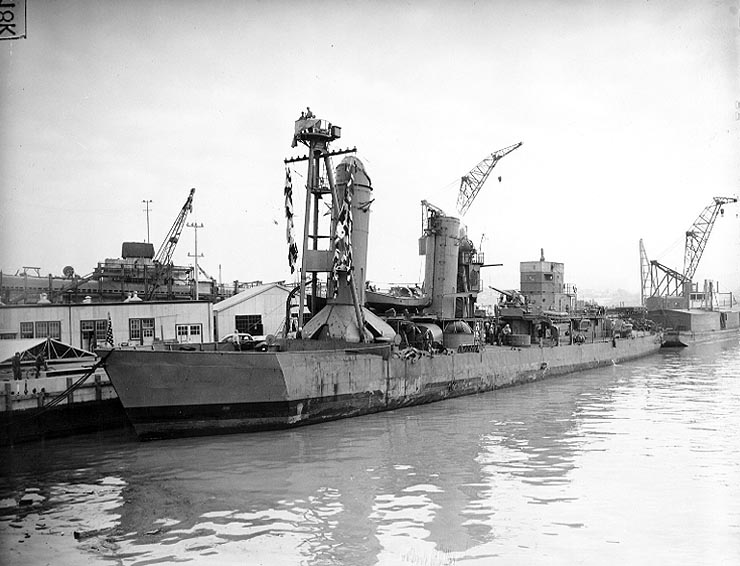 On 9 February, Shaw sailed for San Francisco where she completed repairs, including the installation of a new bow, at the end of June.

Back Into Action – Revenge for Pearl Harbor

Following training in the San Diego area, Shaw returned to Pearl Harbor on 31 August. For the next two months, she escorted convoys between the west coast and Hawaii. In mid-October, as a unit of a carrier force centered on Enterprise (CV-6) she departed Pearl Harbor and headed west. Rendezvousing with a carrier force centered on Hornet (CV-8), the two carrier groups amalgamated as Task Force 61 and moved north of the Santa Cruz Islands to intercept enemy forces headed for Guadalcanal. 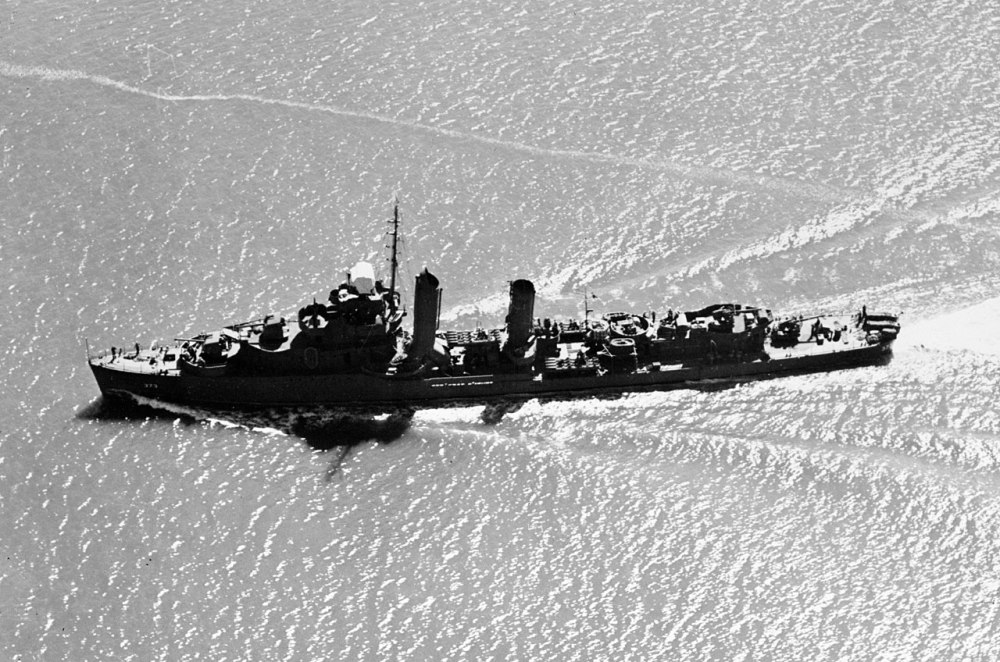 By mid-morning on the 26th, both carrier groups were under attack. As an accompanying ship, Porter (DD-356) stopped to pick up survivors from a ditched Grumman TBF-1 Avenger from Torpedo Squadron 10, she was torpedoed when the plane’s torpedo, jarred loose in the water-landing, made its run into the rescuing ship. Shaw went to Porter’s assistance. Half an hour later, she was ordered to take off Porter’s crew and scuttle the disabled destroyer. Periscope sightings followed by depth charge attacks delayed execution of the mission. By noon, however, the transfer was completed. An hour later, Porter was gone, and Shaw left the scene to rejoin the task force.

Two days later, Shaw headed for the New Hebrides where she commenced escorting ships moving men and supplies to Guadalcanal. She continued that duty through November and December and into January 1943. On 10 January, while entering Noumea harbor, New Caledonia, Shaw grounded on Sournois Reef. She was freed on the 15th, but extensive damage to her hull, propellers, and sound gear necessitated temporary repairs at Noumea followed by lengthy repairs and rearmament at Pearl Harbor which took her through September. 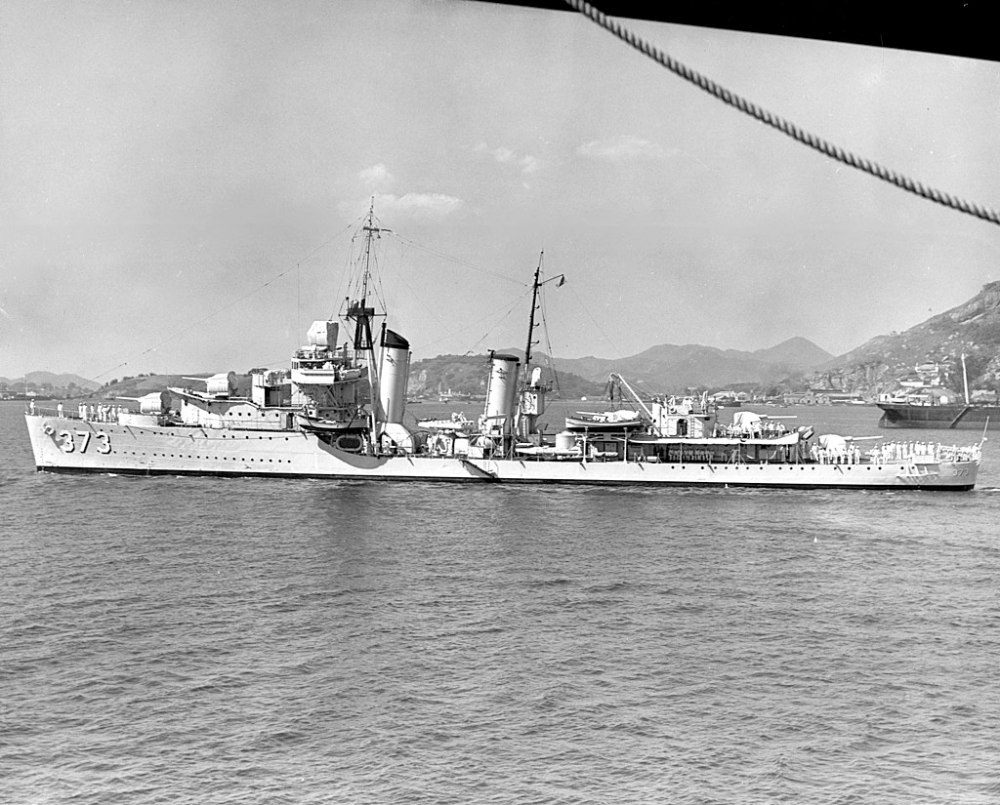 On 6 October 1943, Shaw headed west again, reaching Noumea on the 18th and Milne Bay, New Guinea, on the 24th. Now a unit of the Seventh Amphibious Force, Shaw escorted reinforcements to Lae and Finschhafen for the remainder of October and during November. Following an unsuccessful diversionary assault by Army troops against Umtingalu, New Britain, on 15 December, Shaw recovered survivors from two rubber boats and escorted Westralia and the dock landing ship Carter Hall (LSD-3) back to Buna, New Guinea.

On Christmas Day, 25 December 1943, Shaw escorted units engaged in the assault against Cape Gloucester, where she provided gunfire support and served as fighter director ship. On the 26th, Shaw sustained casualties and damage when attacked by two Japanese Aichi D3A Type 99 carrier bombers [Val] Thirty-six men were injured, three of whom later died of their wounds. Shaw returned to Cape Sudest, New Guinea, on the 27th; transferred her wounded and dead to shore facilities there, and continued on to Milne Bay for temporary repairs. Permanent repairs were completed at Hunters Point, San Francisco, on 1 May 1944.

Shaw returned to Pearl Harbor on the 10th, joined the Fifth Fleet there, and sailed for the Marshalls on the 15th. She got underway from the Marshalls on 11 June with TF-52 to engage in the assault on Saipan. Four days later, the attack began. For the next three and one-half weeks, the destroyer rotated between screening and call fire support duties. In mid-July, she was back in the Marshalls. On the 18th, Shaw got underway to return to the Marianas with the Guam assault force. During the action that followed, she performed escort and patrol duties.

Shaw departed the Marianas on 23 September 1944. Following a tender repair availability at Eniwetok, she rejoined the Seventh Amphibious Force on 20 October and headed for Leyte Gulf on the 25th. Convoy escort duties between the Philippines and New Guinea involved Shaw until the invasion of Luzon took place at Lingayen Gulf on 9 January 1945. From the 9th to the 15th, she performed screening, call fire support, night illumination, and shore bombardment missions. Following this operation, Shaw was involved in the recapture of Manila Bay. After the Luzon operations, she supported the assault and occupation of Palawan during the period from 28 February to 4 March. 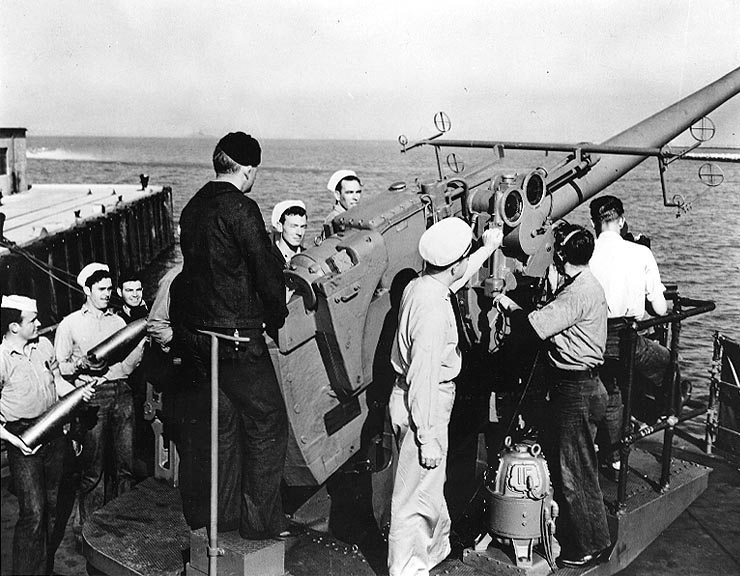 In early April 1945, she operated in the Visayans, setting two Japanese barges on fire off Bohol on 2 April. Damaged soon thereafter on an uncharted pinnacle, she underwent temporary repairs. On the 25th, she sailed for the United States. Shaw arrived in San Francisco on 19 May. Repairs and alterations took her into August. The work was accomplished on the 20th. She then departed for the east coast. On arrival at Philadelphia, she was routed to New York for deactivation. Decommissioned on 2 October 1945, her name was stricken from the Navy Register two days later [4 October 1945]. Her hulk was scrapped in July 1946.

Looking at the history of these two ships, I am reminded that the dedication and sacrifices of her crews was the lynchpin that held them together. Just as American rose from the ashes of Pearl Harbor to defeat the Japanese Empire, the fighting spirit of the American people can rise up once more and defend freedom around the globe when the call goes out.