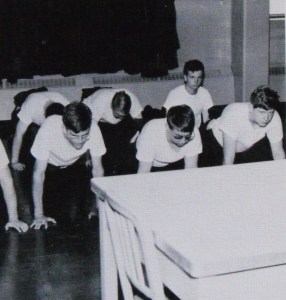 It has been nearly forty eight years since I learned my first lesson on leadership. In June of 1972, I headed off to boot camp to join the thousands of other young men about to become part of the US Navy. Boot Camp is the testing period where you are physically challenged, mentally strengthened and carefully adapted to serve on board a ship, submarine, shore station, or fill any one of the many jobs the Navy has for you.

In the beginning of the process, your civilian life becomes a memory really quickly. You are forced to learn discipline in a way that is rarely seen in the civilian world. You learn to perform as a team. There is individual and team learning and there are individual and team consequences. All of this is designed to save your life and the lives of the people who work with you.

My most memorable individual lesson occurred one Saturday afternoon. I was doing some extra duty with the Drum and Bugle Corp at the hall where we practiced. It was a pretty good gig and ensured I did not have to work in the Galley for my service week. I had been working very hard all day and the Chief came in. He seemed like a pretty good guy. He had helped each of us to become better at our marching and music and was much more approachable than the other Chiefs and Petty Officers. The others barked orders and sometimes got right in your face.

As I was working, I struck up a conversation with him. Everything seemed to be going well when I committed one of those unforced errors that a new guy might do.

“Chief, if you want to call me Mac, that’s what all the rest of the guys call me.”

He stopped what he was doing and in a very firm manner said:

“Well wouldn’t that be nice. The only problem Boot is that in order to do that, I would have to be your friend. And I assure you that I am not your friend. Your friend is that mop. And until I can see my face in that deck, you and your friend will be sleeping together.”

I believe that my cheeks burned brighter at that moment than in any time I had ever remembered. There was never any talk about familiarity again. But he did shake my hand when I graduated from Boot Camp and wished me a successful journey in the Navy. And my decks were the cleanest in the Battalion. I believe that mop was retired after I graduated.

We all learn and teach lesson in leadership along the way. Some are good. Some are questionable. In my case, I make sure that I learn from each one. One of the books I have studied came from Peter Drucker.

Drucker speaks of his lessons from his Mentors. These were people who helped him to develop the skills and abilities that would elevate him in the world of business.

There were five specific lessons that he captures in the book Leader to Leader. (Chapter 1). I would encourage you to read the entire book but felt that these lessons were important enough to share as a tease.

Lesson 1: Treat people differently based on their strengths. Not all of us are at the same place at the same time in our professional growth. In Drucker’s case, his mentor saw that he had the capacity to do more than even he thought. So he continued to place stretch objectives in front of him and demanded excellence.

In Drucker’s words: “He demand enormous things from me. He looked at people. What they should be doing, and then demanded it at a high professional level, far beyond our capacity, and did not stop until we did work that had that quality.”

Lesson 2: Set high standards but give people the freedom and responsibility to do their jobs. Begin with a common understanding of what the measurement of success looks like and give people the freedom to achieve it. But along with that freedom to choose to do the hard things, they must also have the responsibility and understand that there is a consequence.

Lesson 3: Performance reviews must be honest, exacting, and an integral part of the job. In this modern age, we pretend to do performance reviews in too many organizations. There is a template and a suggested process but real performance is rarely measured for effect. The ability to continuously improve is based on open and honest dialogue. Good leaders are able to help the individuals that are under their influence grow. If you are worried about hurting their feelings, you have already failed. Challenging them to reach higher is a critical step in personal development.

Lesson 4: People learn most when teaching others. We must continually seek knowledge and share that with our managers, peers and direct reports. The learning that occurs from that shared knowledge will be a game changer in any situation. Simply relying on what we have always known or always done is a sure guarantee for failure. The single best way to achieve this is to develop a learning strategy that is constantly being reviewed through reflection.

Lesson Five: Effective leaders earn respect – but they don’t need to be liked. Real leadership is one of the loneliest professions that a human being can be involved with. People often have friends but in the advancement to excellence, the leader must always have the ability to give feedback and guidance that will help the individual achieve their goals. Being liked means that we make compromises in order to achieve popularity. Thinking back over the most effective leaders in history, the most effective ones imaginable all had the single characteristic that they must be unencumbered by human weaknesses.

As Drucker said “Intuitively, they understood that the manager’s job is to make human strength effective and human weakness irrelevant.”

He considered this the biggest lesson of all.