This is the first post I have done in about a week.

Summertime seems to be a tough time to write posts and looking back over the last eight years, July has always been the lowest response month for the blog. As someone who fills in for vacationing preachers in the summer, I am fully aware of this phenomenon. People just get busy with other things and its hard to sit for twenty minutes and listen to a sermon from a stranger.

So it is with writing a blog. My creative spirit is always tested during the nice days of summer and I would truthfully rather be outside.

But I don’t always control when the spirit moves me. This morning at our devotional time, I was given the thought that sent me to the keyboard. Well, in a roundabout way. Angus the dog needed a walk so he got first dibs on my to do list.

The thought that was my inspiration was “Why do we gather?”

This is the 100th year of the founding of the American Legion so all across the country people are gathering to celebrate. Other veterans organizations are also celebrating a number of anniversaries. Veterans in general seem to gather as much or more than most groups. Their shared experiences and sacrifices have a strong pull on many of them. I know the same thing can be said about most fraternal organizations and I would never diminish their reasons or motivation. But as a veteran, I am sensitive to the unique nature of what we did. While other groups have fine purposes like helping people with disabilities of challenges (as we call them now), veterans and first responders put something much more permanent on the line. Most were willing to put themselves between others and danger. Up to and including risking their lives for other’s safety.

My family has a long tradition of veterans groups. Great Grandfather was a member of the GAR which recognized the sacrifices made during the Civil War. My Grandfathers served in WW1 and 2 as did my Dad and all of them participated in a number of veterans organizations when they came home. Dad was the champion I think. He was a life time member of the American Legion and later the VFW. He was also a commander for over thirty years and served faithfully until the year he died.

I guess it was his influence that helped me to recognize service beyond my final discharge from active duty. I put together a graphic that shows all of the groups I belong to that are military related. 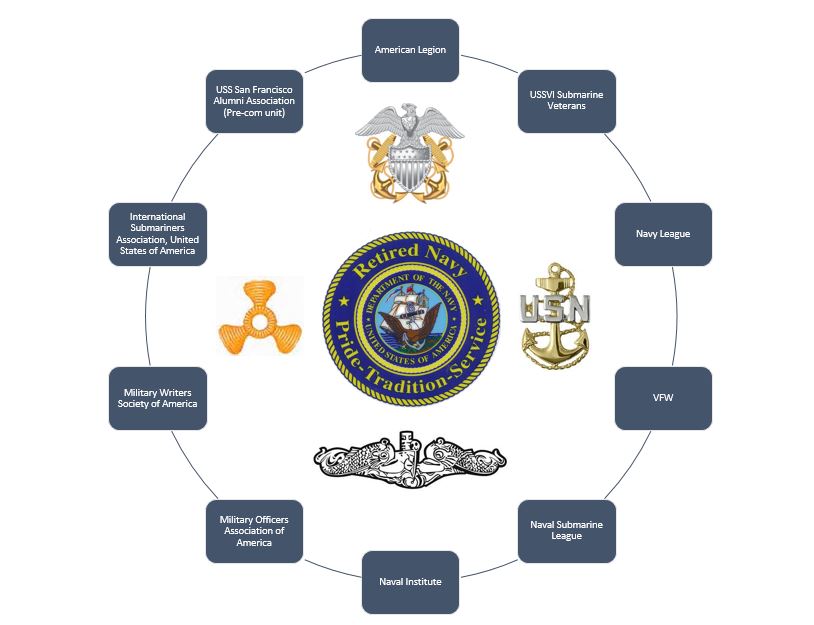 Looking at the list, I realized that each serves a unique purpose and addresses a separate need.

The Legion and VFW, along with MOAA are very involved with not only veterans causes, but provide real services to both active, reserve, retired and “also served” members. Their accomplishments are noteworthy and many have set the tone for America’s response to veterans. The GI Bill for instance would never have existed without the strength of the American Legion and VFW. Congress would have simply ignored the needs and never passed the bills that sponsored the programs.

The Navy League does fine work supporting the Navy, Marines, Coast Guard and Merchant Marines. We have some amazing programs that have made a difference in the lives of our service people and their families. I am nearing the end of my tour as the Pittsburgh Council Presidency and will miss it very much,

Nearly all of the rest of the boxes are directly or indirectly related to submarines. These groups help me to stay current with new trends in submarine development and offer many of us a chance to share our experiences with people who have similar backgrounds. Of all the groups I belong to, I can honestly say that submarine groups provide me with the greatest feeling of satisfaction and the greatest sense of sadness.

The satisfaction comes from knowing that in most cases, they are places where I can feel at home.

While all veterans make sacrifices that are unique to their service branch and assignments, submariners have lived in a world that is surrounded by pressure and uncertainty. We traveled in vessels designed to do the unlikely and faced a danger as old as mankind itself: conquering the sea from within the sea. You would have to have been there for all those days and months to really understand what that means.

On a submarine, you are cut off from the world. Surrounded by seawater, you are entirely dependent on technology for survival. Everything from the power plant to the machines that keep the air breathable, were designed by humans and humans are flawed creatures. The failure of any of the systems required to operate would take the boat to a watery grave with all enclosed never coming home. Communications with the outside world are still limited (although to be honest, when some of us sailed, they were nearly non-existent for months at a time).

But the boats keep getting better and better. New technology. New inventions. New people both men and women.

I am not sure I could survive in this new age.

Oh, they take their uniforms off and stow them away. They move on with their lives and do other things. But ask a real submariner to show you his dolphins. Note: be careful what you ask for however. Over the past few years I have seen an ever growing population of submariners with dolphins tattooed on every conceivable or available inch of skin. Me? I will show you the ones that hang on my wall in my shadow box. (I have a few others that adorn my uniform when I do Navy stuff).

More and more, groups are gathering to see each other. We have had three USS San Francisco SSN 711 “Gathering of the Saints” since the turn of the century. I don’t call them reunions cause that seemed like a term for high schools and other fraternal groups. Since the boat that we gathered on so long ago was the San Francisco which literally means Saint Francis, it was a natural thing for me to call the men who served on her “Saints”. Sorry if that is offensive to the purists. I know that Saints in some religions need to have performed some kind of miracle to gain the title. I can’t tell you why since its probably still classified but what my brothers on the San Francisco achieved surely earned them the title. 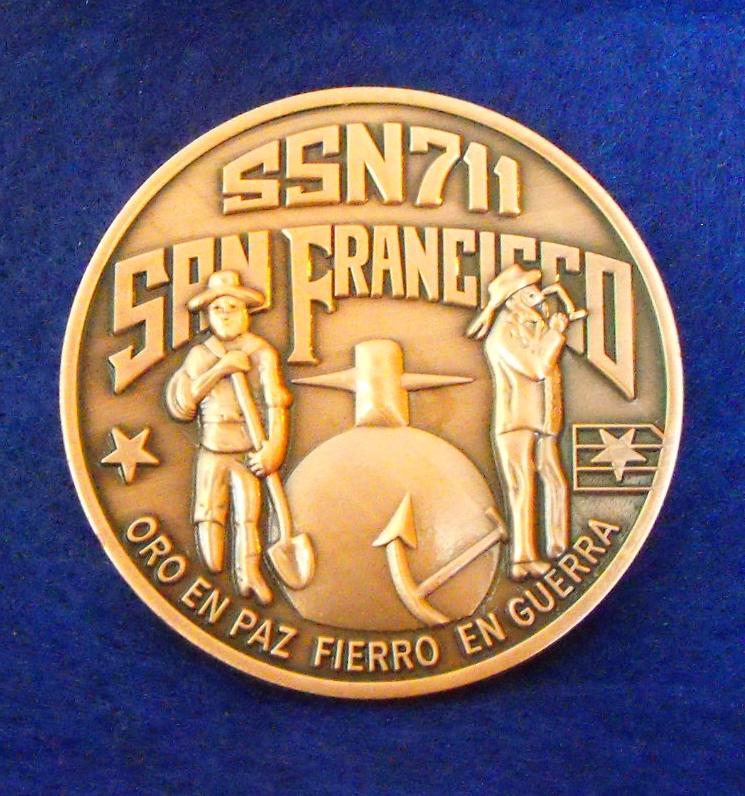 I’m planning another gathering in April 2020.

Debbie says it will be my last. We’ll see. Captain Marshall will be the Honorary Chairman of the Gathering and I am getting a lot of feedback on Facebook that tells me that it will be well attended. I hope so. I miss seeing my brothers.

I will leave you with something I wrote in 1973. Hard to believe its been 46 years. I was a non-qual that had just finished submarine school and had never been to sea one minute when I wrote this. Looking back, I think it was an inspired letter. I found it in my Dad’s belongings after he passed away. 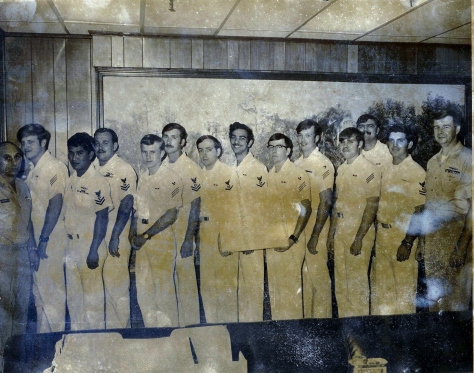 A new breed of men range the oceans as zealously as their brave forefathers. Always ready, just as the minutemen of the early American times, and just as bold as the sailors who dared to try and overcome the vast unknowns of the oceans. The men who serve in solitude amidst the flashing lights and muffled sounds of the machinery. They work and live in confined spaces beneath millions of tons of the matter which covers the majority of the face of this earth. But their purpose goes deeper than a military institution. Besides being a deterrent to nuclear holocausts and safeguarding our borders, these men also untap scientific resources by every patrol that they make. They prove man’s adaptability to live beneath the seas in this day when space for living seems to grow less and less.

And the hardest thing is the isolation which they must face, Living separated fro their loved ones with little communications and knowing two things. They can never tell where they have been, nor can they say that if they go down, they will ever come back again. These pioneers, the men of the Silent Service.

I was 18 when I wrote that. For the next few decades, I would find out how true much of that was.

God Bless all those who protected this country. God bless those that still do.

2 thoughts on “A Gathering of the Saints”