It’s been hard the last few years seeing the struggle of the Clamagore. There are so few submarines from her era still afloat and even the thought of losing one is hard for those of us who know their place in history.

These articles are from 1963 and 1971 issues from ALL HANDS Magazine.

The first was about the spelling of the boat’s name. I have to admit, I am guilty of having committed the sin of misspelling Clamagore. As I am looking at my computer right now, I don’t feel so bad though. Even Microsoft has a hard time recognizing the word. Everywhere it is listed on my screen, all the Clamagores are underlined in red. By with a last name like mine (MacPherson) I am fully aware of what its like to have it incorrectly spelled and pronounced.  (For the record, its pronounced Mac – Fur – son with the accent on the Fur).

I am not sure what the future looks like for this boat. But I do know that she was an important part of our history. She was born as a part of the submarine force that helped to turn the tide of Japanese Imperialism. While she did not get a chance to avenge Pearl Harbor, she did go on to provide thirty years of service in an evolutionary role that represented important submarine development during that time. She was even responsible for training Polaris junior officers in ship handling as a training boat.

Her significance as a part of the Cold War Navy is especially noteworthy. In 1962, Clamagore became one of only nine boats to undergo the GUPPY III conversion. She had a 15-foot (4.6 m) hull extension added forward of the control room, a plastic sail and the BQG-4 PUFFS passive ranging sonar, which included the three sharkfin sensors on her deck.

Clamagore finished her GUPPY III conversion in February 1963, and was transferred to Submarine Squadron 2 (SUBRON2) in Groton, Connecticut. 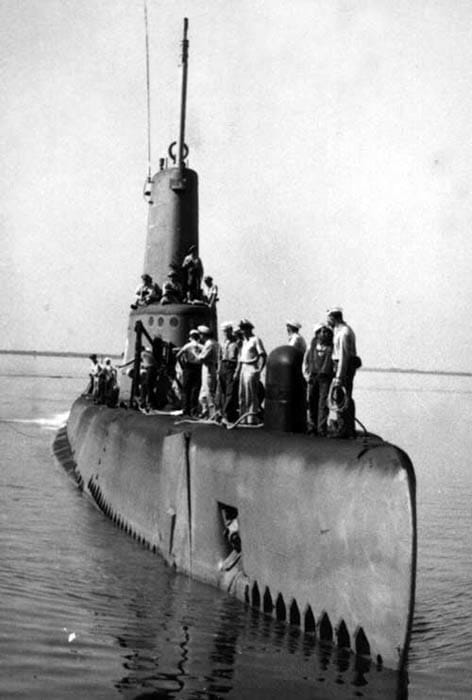 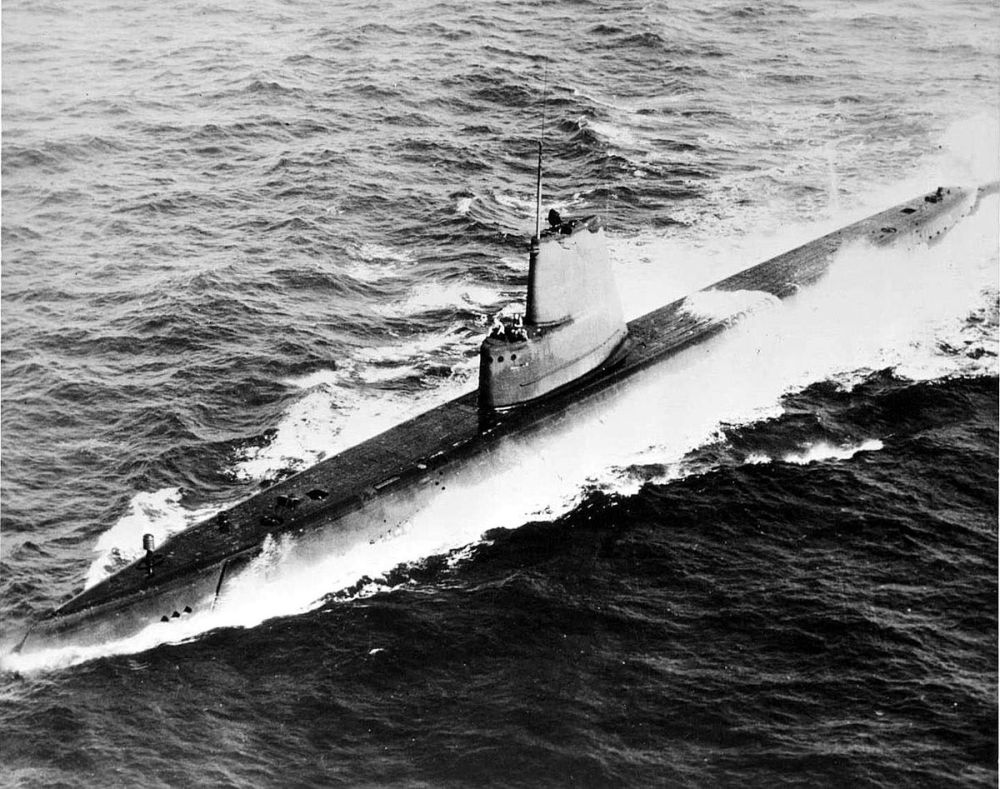 But in a response to a mistake in a previous ALL HANDs magazine misspellings, the crew had had enough!

ALL HANDS Magazine LETTERS TO THE EDITOR January 1963

SIR: For years we of USS Clamagore (SS 343) have endured a good deal of ribbing within Submarine Squadron Four, as despite our best efforts our ship continues to be referred to by press media as USS Clagamore. This year after winning the Battle Efficiency “E” in our division for the fifth time in the 13 years the competition has been held, we were able to silence most of the jokesters by proudly pointing to the big E painted on our sail. Of course, it became somewhat of a hollow triumph when All HANDs (page 15, November 1962 issue) and other publications, in re porting our accomplishment, again listed us as Clagamore. We can hardly complain, however, since even the well-known Jane’s Fighting Ships lists us incorrectly. At any rate, we’re willing to give it another try. I am enclosing a short story and sketch which tells the Clamagore story. Perhaps you can use it sometime. — S. Edwards, LT, USN. P.S.

You might consider the solution finally arrived at by good old Joe Hogbristle, who petitioned successfully in court to have his name changed legally to Frank Hogbristle, because he was tired of people greeting him with “Hi Joe, whaddya know?”

Buck up—your predicament met with instant and sympathetic response here at ALL HANDs. One staffer, who has spent many futile years battling stubborn people who insist upon addressing him as O’Connell long after he has identified himself in pure, pear shaped tones and with perfect enunciation as McConnell, knows exactly how you feel. He feels that you have every right to expect to be identified correctly, especially in Navy publications, and has dedicated himself to the cause of correcting this injustice. He counsels patience and forbearance, however, since he’s sure you’re well aware that an idea, especially a mistaken one, once implanted in people’s minds is extremely difficult to eradicate. Thus, irritating as it is, you will probably continue to be referred to on frequent occasions in the future as Clamagore, when all the while the idiots should know that it’s really Clagamore–Oops, sorry, we, er, ah, heh heh, seem to have gotten a little confused for the moment here. Oh, the heck with it. You do have a problem. Other than that, though, how are things in Clamagora? Incidentally—O’Connell wants to know if it’s just possible that you’ve been wrong all along, and that the rest of the world is right? – Ed. P.S.–See next month’s ALL HANDs for “The Three Faces of Clamagore.” 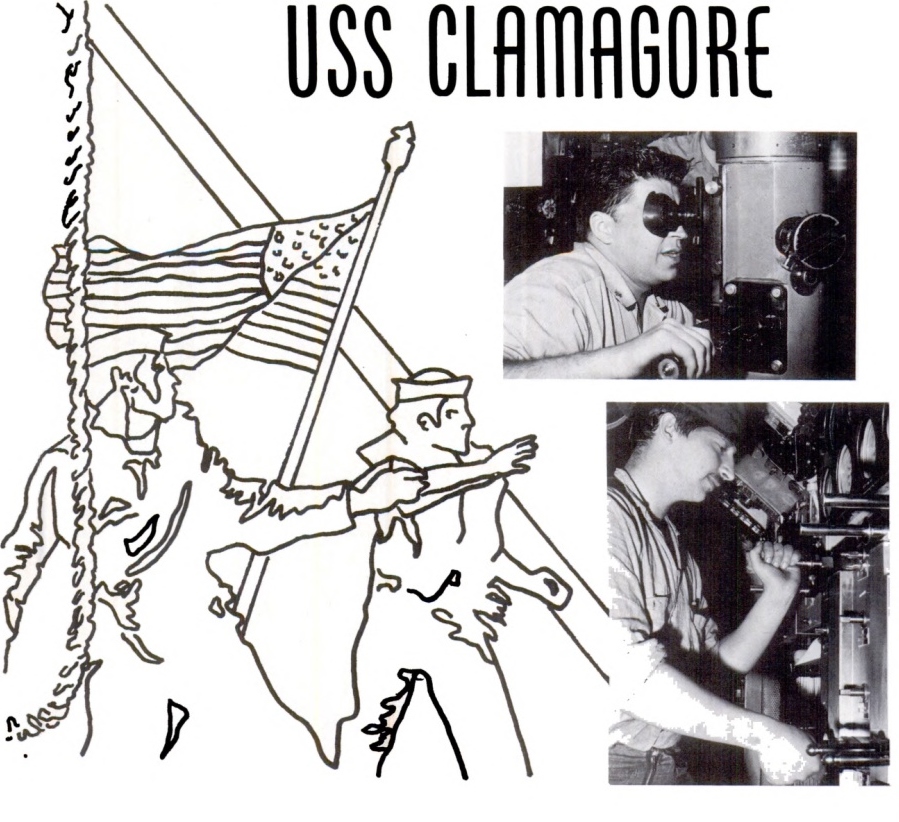 The Three Faces of Clamagore

Fourteen years and a lot of water over the bridge later, still more change was indicated. As one of the old-style submarines selected for conversion under the FRAM (Fleet Rehabilitation and Modernization) program, Clamagore was drydocked at the Naval Shipyard, Charleston, S.C.

During her five-month stay at NSY Charleston, Clamagore was cut completely in two, and a brand new section was inserted amidships. Some results: She grew 15 feet in length and gained some 55 tons in weight in adding the space necessary to house the modern equipment (including advanced electronic and communications systems) and new weapons available to today’s submarines.

There’s increased habitability (living space) too, plus added fuel capacity. In addition, when equipment was placed back aboard following the overhaul, it was done according to the “human engineering” concept—in other words, so located as to be most easily accessible to the operators who use it. Recommissioned as a Guppy III in mid-October, SS 343 is now back in service, fit and ready to provide more years of efficient service to the Fleet. She’s scheduled to leave Charleston’s “Swamp Fox” Squadron early next summer to join SUBRON Two homeported at New London, Conn. 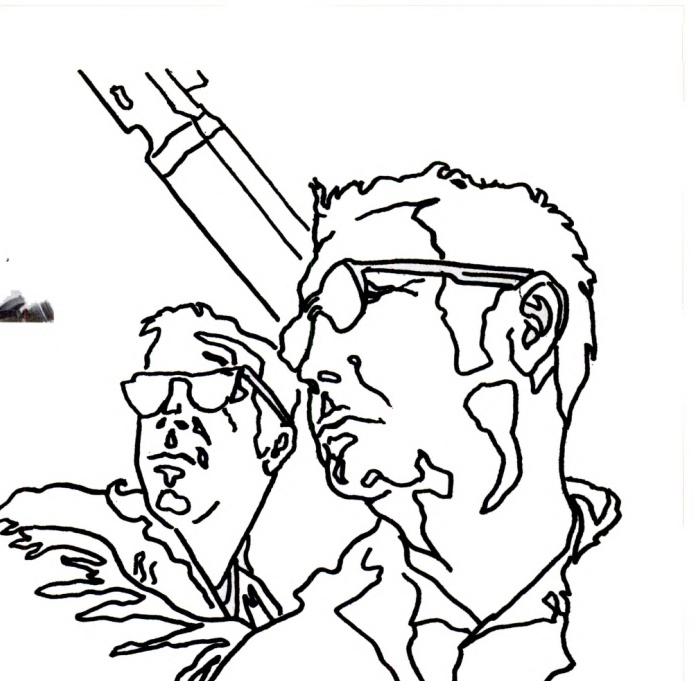 ALTHOUGH still a conventional sub in this age of nuclear power, USS Clamagore (SS 343) has a proud crew. Many men of Clamagore say they wouldn’t leave their present duty assignment for any nuclear-powered submarine in the Fleet. It’s almost as though some of that diesel fuel is flowing in their blood. They know their role in the nation’s defense is an important one.

The men who designed, built and first served in Clamagore back in 1945 would hardly recognize her today, were it not for the telltale number 343 painted on her sail. When first launched, Clamagore cast a typical World War II-style silhouette, easily distinguishable by the deck guns mounted fore and aft of the bridge, and a clipper bow.

Then in 1948, she got her first face-lifting. At the U. S. Naval Shipyard, Philadelphia, she was modified into a Guppy II-type, complete with the then newly developed snorkel system.

Fourteen years later and a lot of water over the bridge, more change was indicated. As one of the old style submarines selected for conversion under the FRAM (Fleet Rehabilitation and Modernization) program, Clamagore was drydocked at the Naval Ship yard, Charleston, SC.

During her five-month stay at NSY Charleston, Clamagore was out completely in two, and a brand new section was inserted amidships. The result: she grew 15 feet in length and gained some 55 tons in weight in adding the space necessary to house the modern equipment (including advanced electronic and communications systems) and new weapons. There’s increased living space too, plus added fuel capacity. In addition, when equipment was placed back aboard following the overhaul, it was done according to the “human engineering” concept — in other words, so located as to be most easily accessible to the operators who use it. 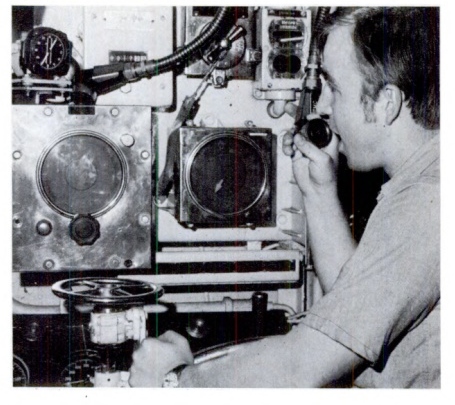 RECOMMISSIONED as a Guppy III in 1962, SS 343 was back in service, fit and ready to provide more years of efficient service to the Fleet. Clamagore, like the rest of the Navy’s diesel-powered submarines, still conducts necessary operations on overseas deployments and off our coastlines.

They are not, by any means, limited to training operations, although Clamagore does train junior officers of Polaris submarines in shiphandling. However, the men of Clamagore know such operations, whether overseas or at their home port at New London, Conn., with SUBRON Two, are vital in protecting this country and at the same time keeping our sailing men the best trained in the world.

Among the varied duties aboard Clamagore: taking periscope bearings, manipulating the air manifold to surface the ship, keeping watch over the area waters, supervising work topside and communicating orders from the bridge. The combined effort keeps the sub running like clockwork. 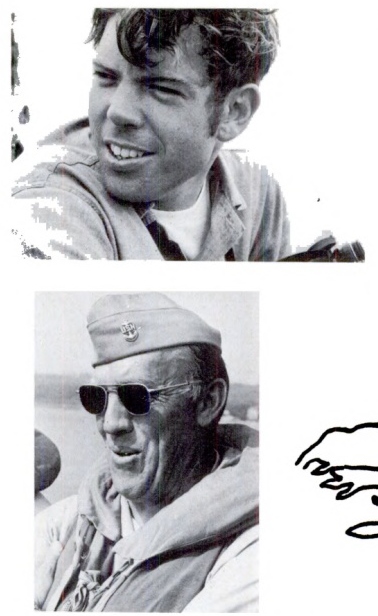 Four Years after this article was published, the Clamagore would join the rest of her sister ships on the inactive list.

Clamagore was decommissioned on 12 June 1975 and stricken on 27 June 1975 after having served in the Navy for thirty years. She was donated as a museum ship on 6 August 1979.

Clamagore arrived at Patriot’s Point Naval & Maritime Museum, Charleston, South Carolina in May 1981, where she was moored as a museum ship along with aircraft carrier Yorktown and destroyer Laffey.

Clamagore was listed on the National Register of Historic Places and designated a National Historic Landmark on 29 June 1989.

According to the South Carolina Department of Archives and History, Clamagore “is now the only surviving GUPPY type III submarine in the United States. She represents the continued adaptation and use of war-built diesel submarines by the Navy for the first two decades after the war.” The GUPPY conversion submarines constituted the bulk of the nation’s submarine force through the mid-1960s.

On January 10, 2017 the Palm Beach County Commissioners voted unanimously to approve funds for the vessel to be sunk as an artificial reef. It had been planned for the submarine to be pulled out of the water by May 1, 2018.

If you would like to participate in the operation to save the boat, more information can be found here: 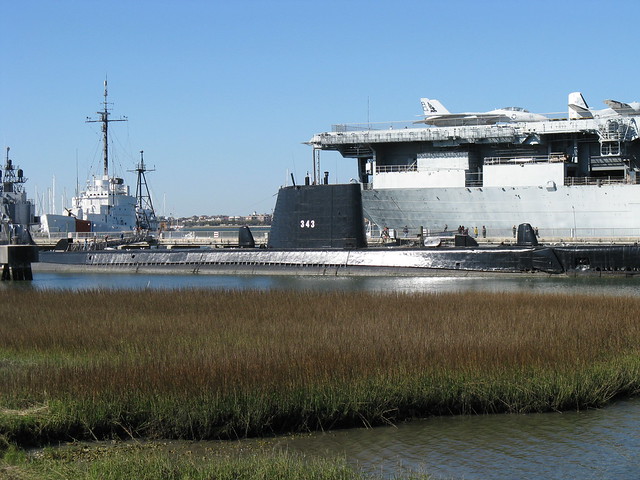