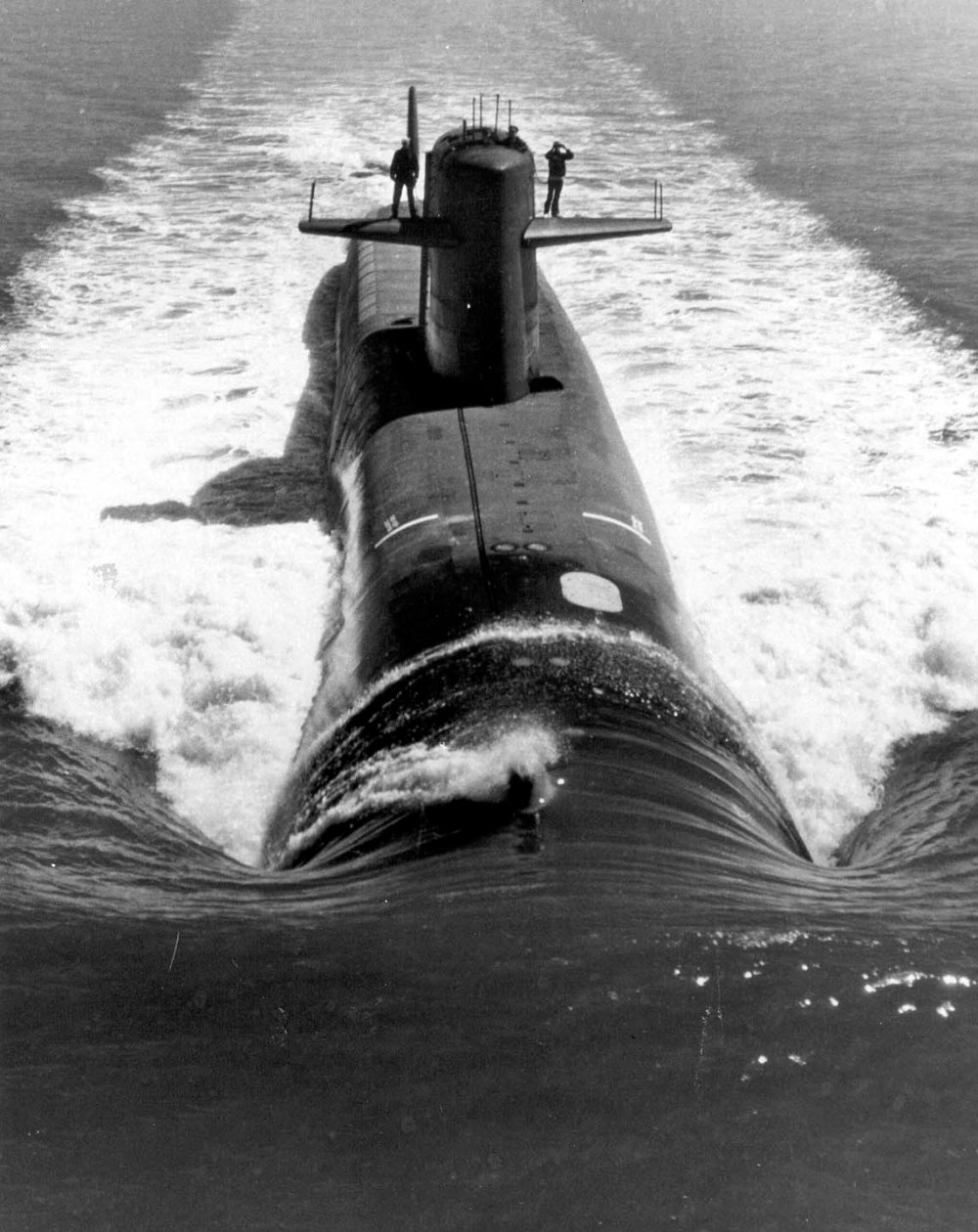 Andrew Jackson was one of my favorite characters from childhood. His story of a backwoods lawyer becoming President is an inspiration to many people since it was the first time in America’s history that a person who was not a member of the founding elite rose to power based on the will of the common man.

Everything about Jackson was controversial. I do not believe he could even be elected as a dog catcher in today’s world. But everything that made him controversial in his day propelled him to the highest seat in the land. In reviewing his story, I believe that he would have been an ideal enlisted submariner.

Unconventional and bold are two of the watch words that are often associated with Submariners. Jackson wrote the book on both. From a modest beginning, he rose above every form of adversity and set the pace for the growth of America.

It has only been in the last few decades that people have begun to resent him publicly for his many faults. I do not have the inclination to humor those who want to eliminate him from history by repeating the many “crimes” and “sins” he is now accused of. I would only say that like many in the group that provided their names for the 41 for Freedom, the greater weight of his deeds is more than worthy of the honors that were rightly bestowed upon him during his time. American would not look like American if he had never lived. And, he is part of why we exist today.

As I read his history from Admiral Rickover’s book, it is easy to understand both his greatness and his faults. But the submarine for which he was named is a part of the greatest and most dangerous struggle the world has never known. They did their job well. 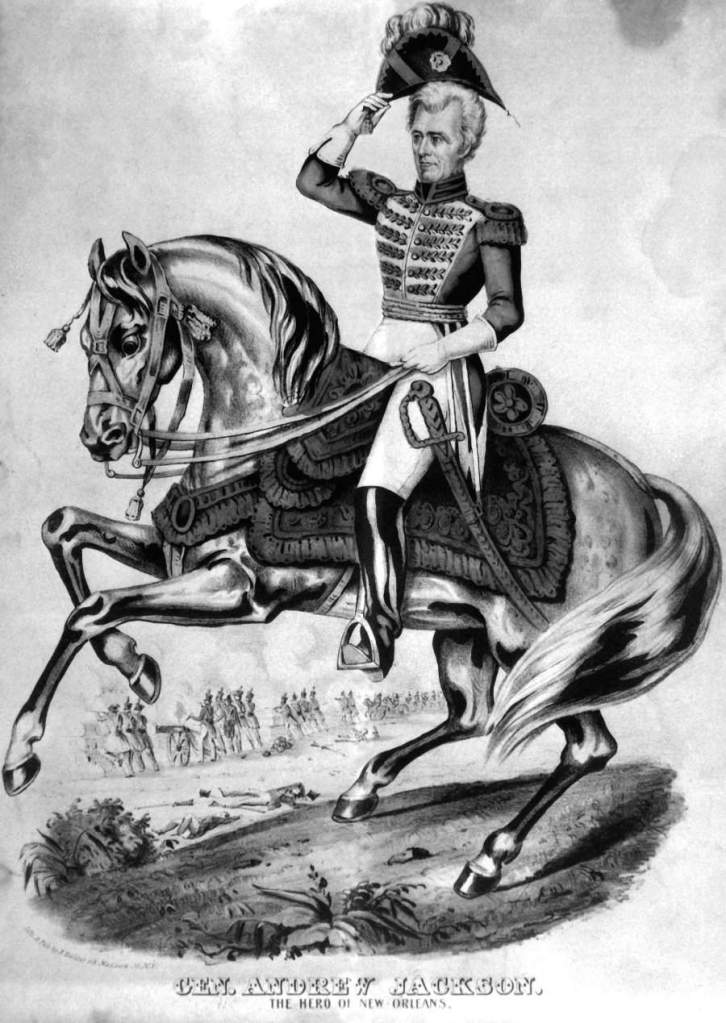 Andrew Jackson, born on 15 March 1767 at Waxhaw Settlement in Lancaster County, S.C., fought for American independence during the Revolutionary War and was captured by the British while participating in the Battle of Hanging Rock on 6 August 1780. After the war, he studied law at Salisbury, N.C., and was admitted to the bar in 1787.

The following year, he moved to Tennessee and, before long, had acquired the tract of land where he later built his home, the Hermitage. In 1796, Jackson took part in the Tennessee constitutional convention and was elected as the new state’s first member of the Federal House of Representatives. Although elevated to the Senate the following year, he left Washington in 1798, soon joined the Tennessee Superior Court, and remained on the bench until 1804.

Commissioned major general of the Tennessee militia in 1802, Jackson led the state forces that defeated the Creek Indians at the Battle of Horsehoe Bend. Commissioned a major general in the United States Army, he commanded the American troops that routed British forces driving toward New Orleans on 8 January 1815 and thus achieved the national renown which first prompted the public to view him as presidential timber.

He later led expeditions into Florida to protect the rights of American citizens there, but received considerable criticism for his execution of two outlaws who were British subjects, an act that brought the United States near to war with both England and Spain. The later purchase of Florida partially vindicated his position.

A candidate for the Presidency in 1824, Jackson received a larger popular vote than any other candidate; but, since no one had a majority, the choice of the president was left to the House of Representatives which picked John Quincy Adams. However, Jackson won a landslide victory four years later and, on 4 March 1829, began the first of two terms in the White House. His administration was characterized by a democratization of the nation, strong support of the Federal government; the introduction of the spoil system; the confinement of Indian tribes on reservations; and a victorious struggle against the wealthy and aristocratic elements in the nation in his battle opposing the recharter of the National Bank. Jackson died at the Hermitage on 8 June 1845.

Jefferson might “feel much alarmed at the prospect of seeing General Jackson President,” declaring he is “one of the most unﬁt men I know for such a place,” though admittedly “an able military chief;” indeed, warning that Jackson was a “dangerous man,” given to wild outbursts of passion, willful and inclined to ride roughshod over the law. But Jackson had in high degree the qualities most admired by the man in the street—vigor, energy, straightforwardness, courage, an iron will to succeed. That he was deﬁcient in the qualities heretofore demanded of presidential candidates increased, if anything, his immense popularity. Bancroft reﬂected public opinion in his eulogy of Jackson (1845) when he spoke with admiration of this “un-lettered man of the West . . . little versed in books, unconnected by science with the traditions of the past,” but possessing a mind “nursed in freedom” by the “ancient forests” in which he had grown to manhood.

Andrew Jackson (SSBN-619) was laid down on 26 April 1961 at Vallejo, Calif., by the Mare Island Naval Shipyard; launched on 15 September 1962; sponsored by Mrs. Estes Kefauver, the wife of Senator Kefauver of Tennessee; and commissioned on 3 July 1963, Comdr. Alfred J. Whittle, Jr., (Blue crew) and Comdr. James B. Wilson (Gold crew) in command. 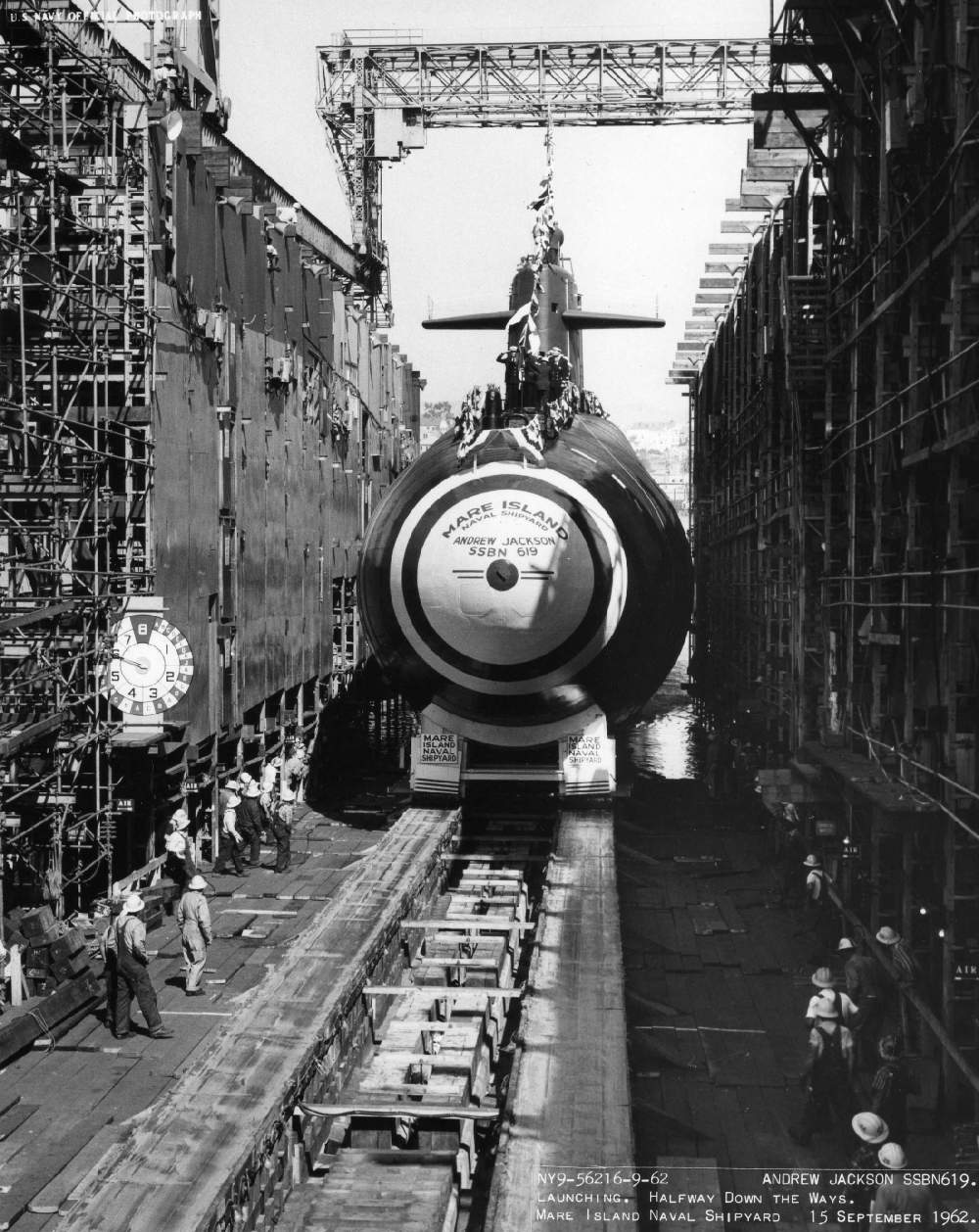 Following commissioning, the nuclear-powered fleet ballistic missile submarine sailed via the Panama Canal to the east coast. On 1 and 11 October, during shakedown training out of Cape Canaveral, Fla., she successfully launched A-2 Polaris missiles; and, on 26 October, she sent A-3X Polaris missiles into space in the first submerged launching of its type; and she repeated the feat on 11 November. Five days later and six days before his assassination, on 16 November 1963, President John F. Kennedy, embarked in Observation Island (EAG-154), observed Andrew Jackson launch another A-2 polaris missile from a point off Cape Canaveral and congratulated Comdr. Wilson and his crew for “impressive teamwork.” In late November, Andrew Jackson entered the Charleston Naval Shipyard, Charleston, S.C., for post-shakedown availability. 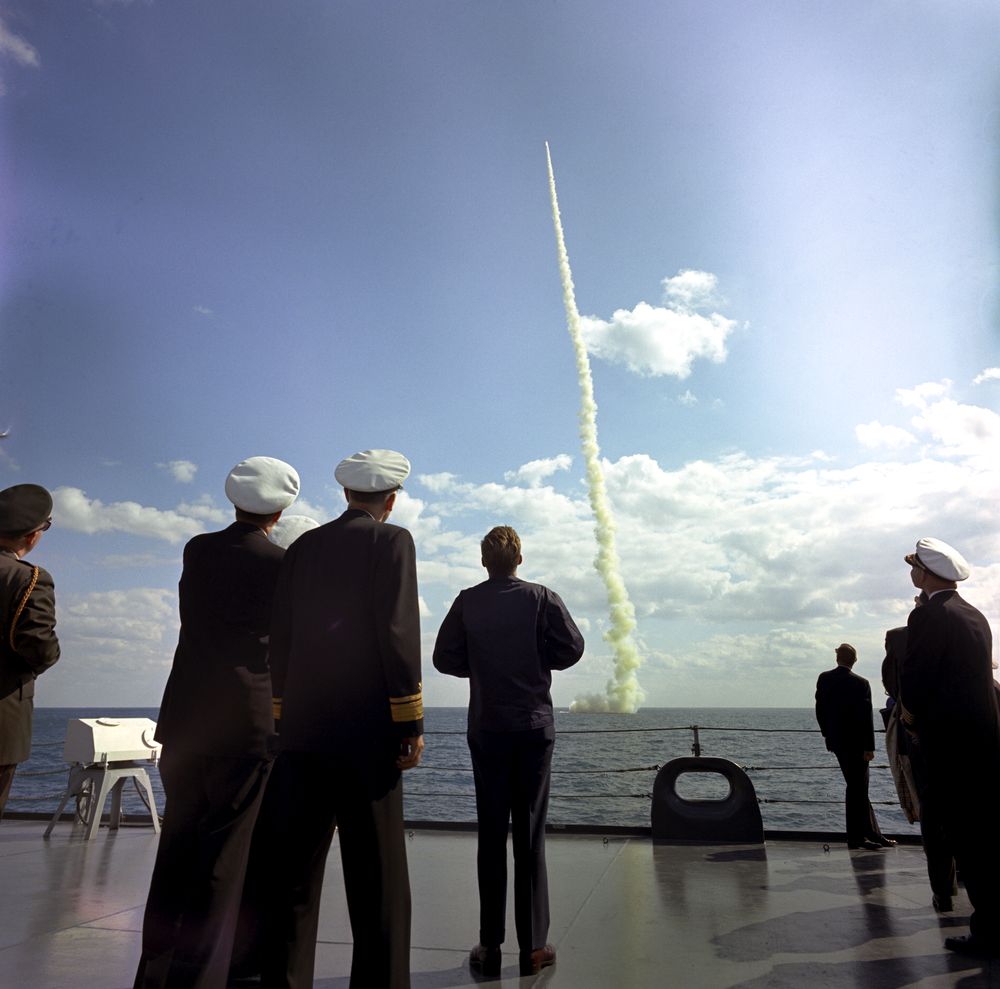 The yard work was completed on 4 April 1964, and Andrew Jackson was assigned to Submarine Squadron 16, Submarine Force, Atlantic Fleet. In May, she departed her home port, Charleston, for her first patrol and continued to conduct deterrent patrols from the advanced base at Rota, Spain, through 1973. On 19 March of that year, the submarine arrived at the Electric Boat Division, General Dynamics Corp., Groton, Conn., for a conversion to Poseidon.

This modernization and repair task was completed on 7 August 1975, and the ship sailed to Exuma Sound, Bahamas, for acoustic trials. Next she reported to Cape Canaveral, Fla., for Poseidon missile tests. In December, Andrew Jackson returned to Groton, her new home port, for the Christmas holidays.

Post-shakedown operations continued in 1976. During February, the submarine conducted nuclear weapons acceptance tests and made port visits at Roosevelt Roads, Puerto Rico; St. Croix, Virgin Islands; and Ft. Lauderdale, Fla. She sailed to Charleston on 5 March and entered the Charleston Naval Shipyard on 8 March for an availability period. Andrew Jackson was underway again on 9 May and returned to New London, Conn., in June. The next four weeks were spent in midshipman training cruises in the New London operating area. In late July, she left New London for her first strategic deterrent patrol after her Poseidon conversion. When the patrol was completed, Andrew Jackson entered her advanced base at Holy Loch, Scotland. In 1977, patrols from Holy Loch were interspersed with port visits at Halifax, Nova Scotia, and New London. In September, a refit was conducted at Charleston, then the submarine returned to Holy Loch. Andrew Jackson continued these deterrent patrols from Holy Loch for another decade, completing her sixty-ninth and final strategic deterrent patrol on 27 August 1987.

Andrew Jackson returned to Groton in October for pre-inactivation planning before shifting to Charleston on 14 February 1988. Following an inactivation ceremony on 28 May, the boat entered drydock for dismantling of the missile compartment and defueling, as task completed in time for the submarine’s decommissioning at Charleston on 31 August 1989. Later towed to Puget Sound Naval Shipyard, the former ballistic missile boat was disposed of through the submarine recycling program on 30 August 1999. 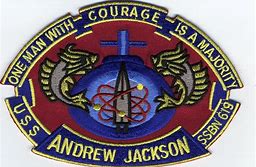