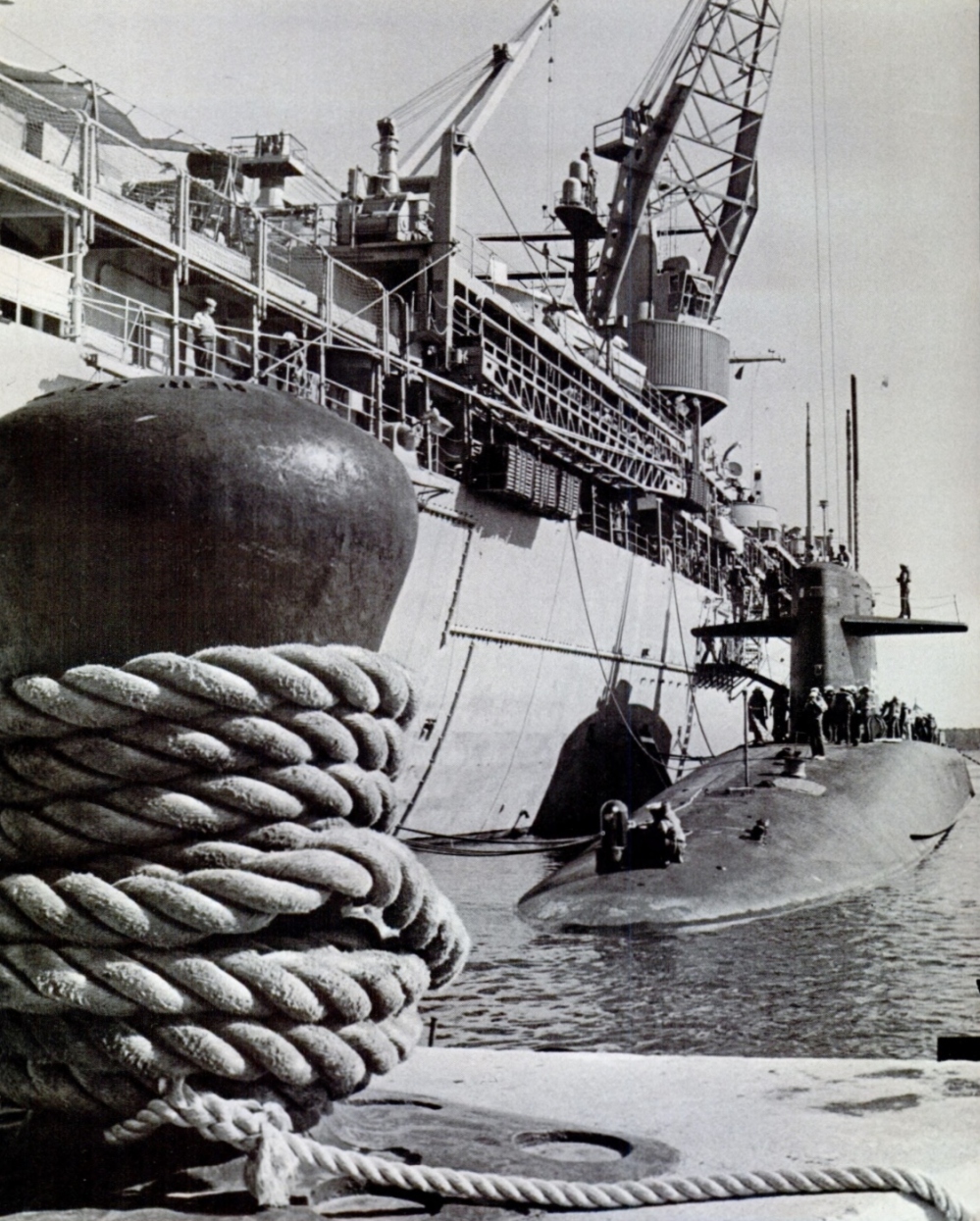 I still have “Hunley dreams”. It’s been nearly twenty five years since I left the Hunley and the Navy but the intensity of my tour on board seems to stir a lot of memories when I should be fast asleep.

The Chief Engineer that was my first boss was a bit of a character. Frankly, looking at him reminded me of looking at a cross between Joe Stalin and Saddam Hussein. He had a personality to match as well. I was taught at an early age that if you couldn’t say anything nice about someone, don’t say anything at all. But in honor of the twenty fifth year since we parted company I may make an exception. Those that knew him know the whole story will understand and that is good enough.

What he did do for me was to make me hard as nails when it came to dealing with adversity. He also cemented in me my admiration and respect for my many Chiefs and fellow officers who found their own courage to put up with his character. Many of them paid a price for that but all of them are better people for the experience as well. Finally, I learned the value of treating people with dignity and respect. I have found that you get a much better result that way.

The ship was in pretty rough shape when I came on board in 1991. The engines had been run very hard through the years in support of the forward deployments. Most of the auxiliary equipment also suffered from over work. But we did our best over the next two years getting her back into shape. Plus, we added air conditioning to many of the spaces that were never intended to be air conditioned. That project came in handy when we deployed for south Florida after Hurricane Andrew. The ship passed her OPPE with flying colors and successfully passed an INSURV inspection just in time for them to announce her decommissioning.

I had good crews. Both my M division crew and especially my A division crews were made up of exceptional people. It was only my second time commanding women alongside the men and I gained much from the experience. I learned to value all of my sailors for their unique contributions. It’s a joy when I hear from them and find out about their lives after Hunley.

Hunley had been out of the boomer business for a long time by the time I showed up. She was probably just hanging on by a thread from a mission perspective but we still managed to credibly serve the fast boats in Norfolk. Sadly, we were a big target for cost savings when the Cold War ended. So when she left service in September of 1994, so did I.

But about the dreams.

I am back in the engineering spaces. The ship is in a North Atlantic storm in early winter. I am the EOOW and the Captain keeps calling down for another knot of speed. I have all the mains on line and we are straining to keep any forward progress at all. Hunley was not built for speed. On a very good day, we might hit 16 knots. This was not a very good day.

Maybe we should have topped off on fuel, but the storm that was approaching Norfolk did not give us much time. I had reported that we were at a quarter of our capacity. Top heavy would be an understatement. There were only two of us qualified as EOOW so 12 hours on and 12 hours off. Not really off since there were so many other things to do. Right in the middle of the storm, the CHENG swings open the door to the EOS. His eyes are blurry and red. He reeks of alcohol. He walks with a stumble past me and lurches to the other cushioned chair on the far side of the room. He holds his head in his hands and you can hear him mumbling over the sounds of the watch standers puking.

I approach him and ask him if he is okay. He just glares up at me with those demon eyes. In a quiet voice, I tell him that he needs to leave and not make a spectacle of himself. There is the briefest flash of evil and then just as quickly, a veil of submission. I had never seen that look before. He got up and staggered back out the door he entered. I ordered the messenger of the watch to follow him up the ladders and make sure he got back to his stateroom. The ship is still lurching and I did not want his death on my conscience. He would not appear for two more days. No one looked for him. It was a good two days. Nothing was ever spoken about the night again. He transferred on the day my Father passed away. It was at once the saddest and most joyful day of my life up to that point.

It’s okay. It was just a dream after all. No Navy ship in the world would allow an obnoxious bully with a horrendous drinking problem to be in charge of an entire department would they? That would be a real nightmare wouldn’t it?

This story comes from the ALL HANDS Vault of January 1971

Hunley played an important role in supporting the Polaris and Poseidon missions. This story was written when she was around ten years old.

SHE ISN’T PARTICULARLY sleek or fast, she’s never fired a shot in anger, and she spends most of her time in port.

But what the submarine tender USS Hunley (AS 31) lacks in glamor, she makes up for in importance to the Polaris submarine fleet, one of America’s strongest deterrents to nuclear war. 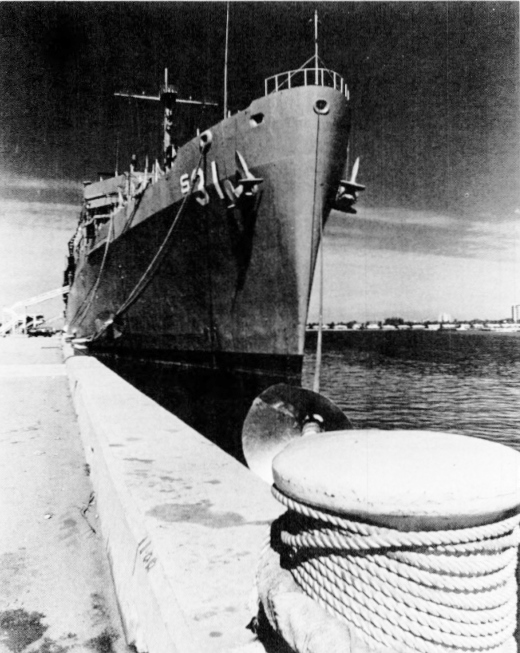 Hunley was the first tender designed from the keel up specifically to provide service to nuclear-powered fleet ballistic missile submarines.

Because of that distinction, she has had two jobs throughout her eight-year history: providing all the service and maintenance needed by SSBNs, and serving as a test vehicle for evaluating new procedures.

Hunley has performed both tasks well. Her crew is well equipped and trained for the first job — supply, service and repair. Polaris submariners may receive medical care, spare parts, or maintenance service of practically any kind from the facilities on board the tender.

In the second job — testing new methods – Hunley has accomplished things no submarine tender had ever attempted before.

ACCORDING To Hunley’s records, she was the first tender to repair three different classes of nuclear ballistic subs at one time, and the first (and only) AS to carry all three generations of the Polaris missile, A-1, A-2 and A-3, at the same time. Another claimed first was the battery replacement on USS Ethan Allen (SSBN 608) in Holy Loch, Scotland.

She has served tours in Holy Loch, Norfolk, Guam and her home port of Charleston. Her crew of 50 officers and 1075 enlisted men can handle practically any service or maintenance task.

Many of them have attended special schools to learn their jobs.

Their equipment ranges in size from huge lathes to tools for working with almost microscopic instrument parts. The ship is built around electronics labs for the repair of complex missile guidance systems and submarine detection devices, and a wide array of specialized shops – optical, drafting, printing, woodworking, plastics and others.

Hunley’s supply department, which stocks three times as many items as that of an aircraft carrier, can sustain the needs of the ship and her subs for long periods without replenishment. Electronic accounting equipment keeps track of funds and supplies.

Her medical and dental departments can perform routine care, minor surgery or emergency operations. They include prosthetic and bacteriological labs. Chaplains provide counseling and spiritual services for Hunley’s men and visiting submariners. And for more mundane needs, the ship contains a well-stocked ship’s store, a snack bar, a barber shop, a library and TV lounges.

Hunley is one of five nuclear ballistic missile submarine tenders stationed around the world.

Today, moored at the Polaris Replenishment Site at Charleston, she continues to tackle tough jobs first.

Because of her past achievements – and because she is now the stateside tender – Hunley has been called on for unusual and difficult jobs, including many never before attempted.

By continually improving her methods of dealing with such assignments, she has cut the time required for some of them as her crew gained experience.

One of her jobs may have been unique for a submarine tender: giving salvage help to the Charleston shipyard to recover a damaged crane from the floating SSBN drydock USS Alamogordo (ARDM 2).

HER PRESENT Assignment includes providing service for all Polaris submarines coming out of overhaul.

After the three- to four-month shakedown cruise which follows an overhaul, the submarines report to Hunley for final repairs, reloading and replenishment.

As she entered her ninth year, Hunley could boast of having served every one of the Navy’s nuclear-powered fleet ballistic missile submarines except for USS Will Rogers (SSBN 659).

As the first Polaris submarine tender specifically designed for that purpose, Hunley has been somewhat of a showpiece for the SSBN Navy, playing host to many American and foreign dignitaries every year.

But most of her attention has gone to another class of visitors — Polarismen and their submarines. With Hunley supplying nearly everything they need, the submariners must feel like the real VIPs.

Thanks to all of the Hunley sailors who served so well during the Cold War under some pretty harsh circumstances. 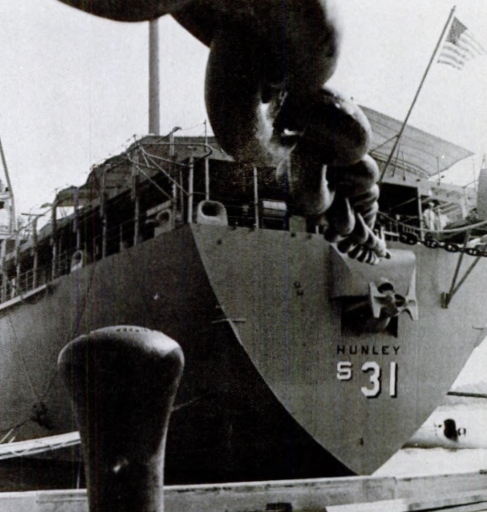