It has been over 27 years since we left Scotland to return to America but in so many ways it seems like yesterday.

Our trip was cut way too short with the imminent closing of the American base at Holy Loch and so many things have filled our lives since that day. But Scotland will always be a part of our lives.

Arriving there in August of 1990, we learned so much about living in a country that was filled with amazing adventures and challenges. We quickly learned that life was entirely dependent on schedules and arriving at the appropriate place on time. From the airport, our sponsors took us to the ferry landing where we got in line. It is possible to drive to most places in on the Scottish mainland, but the ferry was the quickest way. Plus, the cost of petrol at that time was very prohibitive so you learned quickly that using the short cuts was a necessity. 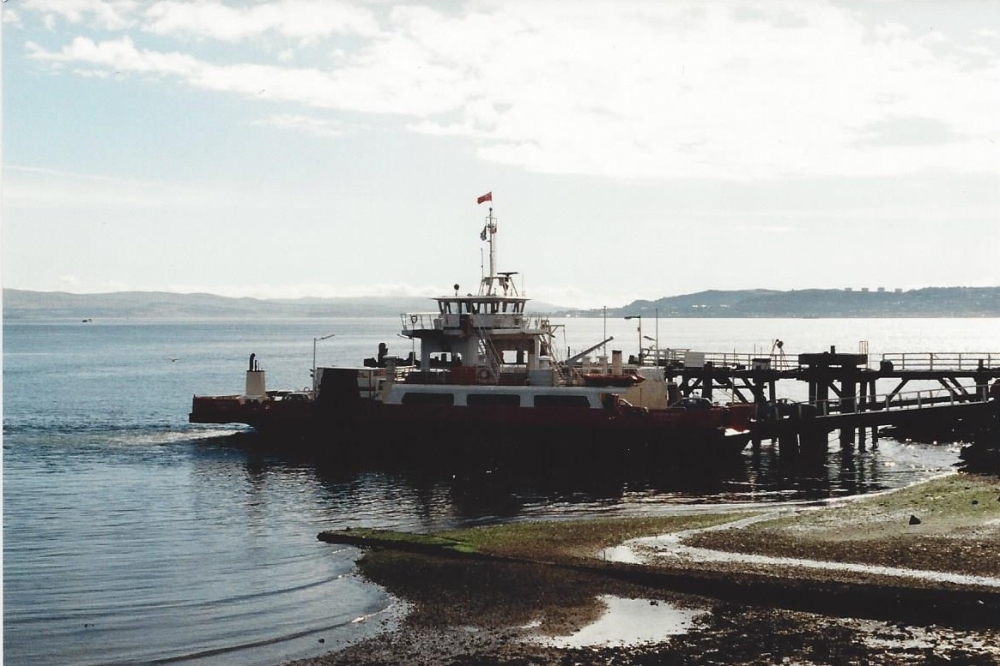 That first trip across the water from Greenock to Dunoon was pretty exciting. Although Debbie and I had ridden a few ferries in Washington State, this one seemed a lot closer to an adventure. The water was very choppy and the wind was blowing as if to say “Welcome to Scotland” in a way that was mistakenly Scottish. Even for an August day, sweaters were more appropriate than short sleeve shirts and the mist that came over the bow was brisk indeed.

Arriving on the other side, we all drove off in their car to take a short trip around Dunoon and the American points of interest. After a short drive, we rounded the road from Dunoon and in front of us in the Holy Loch stood the submarine tender and my next duty station, the USS Los Alamos AFDB 7. Both were grey and the brightness of the day highlighted the vessels where I would spend much of the next fourteen months. Looking at the drydock, I remember thinking to myself, what have I gotten myself into/

We settled in to Dunira (which was the name of the Bed and Breakfast that would be out temporary home for a few weeks) and met the owners. She was Scottish and he was Danish. They made a lovely couple and we were ushered to our small apartment upstairs. The shower was smaller than any I had seen since my first submarine. 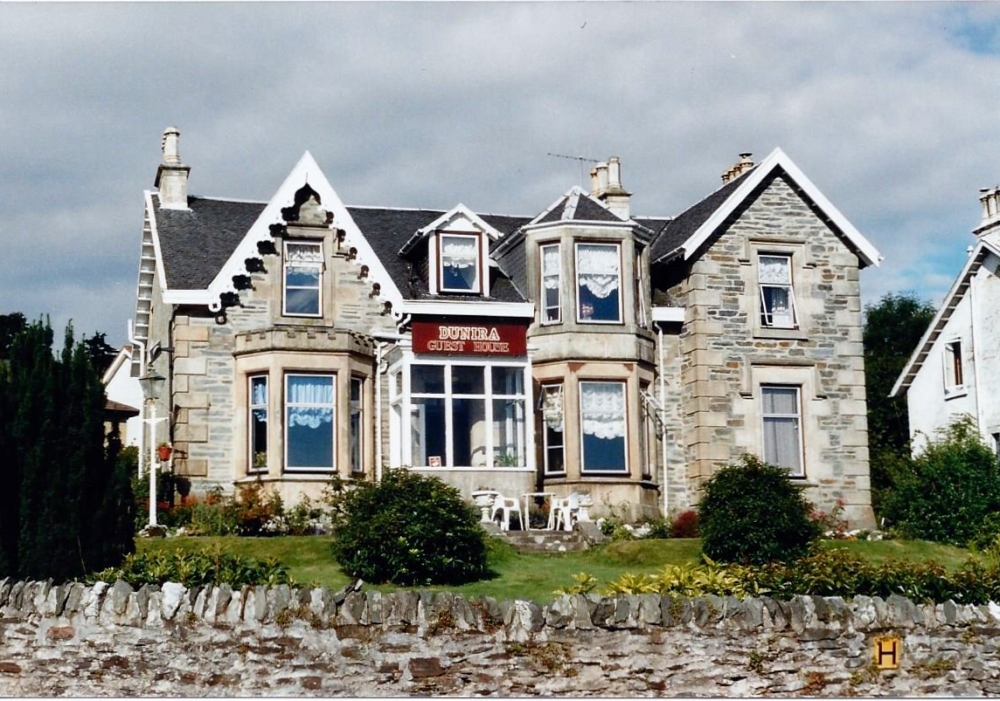 The rooms were very tight and we realized we had carried too much stuff with us. That would be a lesson that would repeat itself over the next few months when the rest of our household goods arrived. Some of the things we brought we not even unpacked for the tour.

But we were in Scotland, the land where some of both of our ancestors had come from. We have done a lot of genealogy and with the few clues that were passed down to both of us have found a lot of information about where our families had their origin.

One of the highlights of the tour was when we were able to have the perfect Scottish weekend. The weekend started with a drive to Newtonmore, my family’s ancient home. When we arrived we attended a Ceilidh for Clan MacPherson followed by a full day of Clan activities on the following day.

Sunday, we drove to Edinburg for the World Famous Tattoo. I had purchased tickets nearly a year in advance and we had the most amazing seats just below the Governor’s Box.

It was surely a weekend to remember.

We learned a lot of history while we were there. For instance, even though the British Union Jack is flown nearly everywhere, the St Andrew’s Cross or Saltire is Scotland’s national flag.

We traveled quite a bit while we lived there but I was not able to make it to Athelstaneford. This was a village three miles north-east of Haddington in East Lothian. 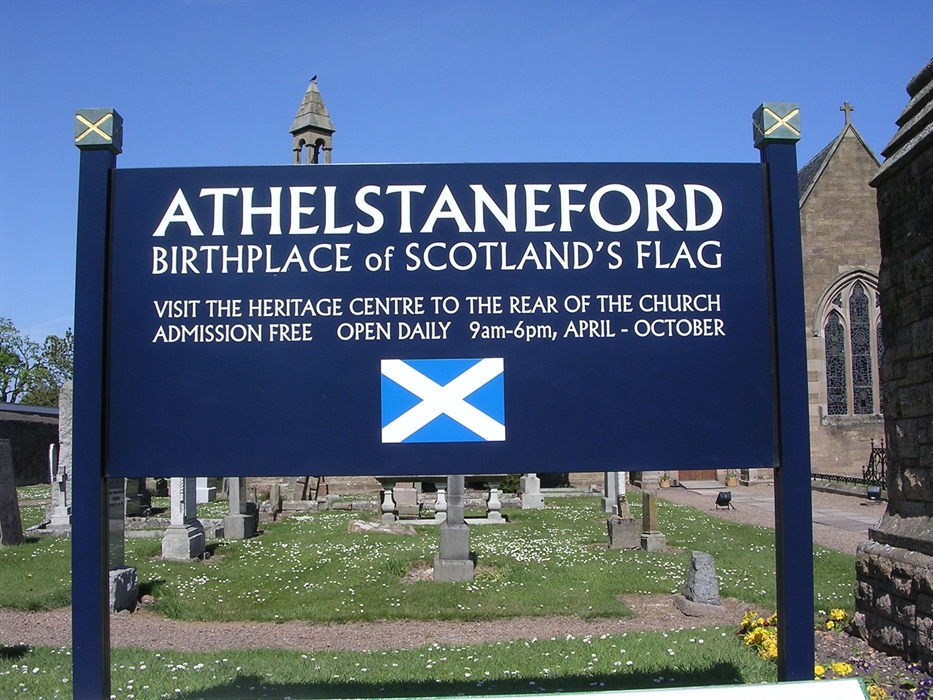 This is their story:

Athelstaneford gets its name from the legendary battle between Saxon King Athelstane and Pictish King Hungus (Angus) in the 9th century. It began as a model village in the late 18th century, thriving on agriculture and weaving.

Between 815 AD and 832 AD, legend describes how an army of Picts, under Angus mac Fergus (High King of Alba), had been on a punitive raid into Lothian (which was Northumbrian territory), and were being pursued by a larger force of Angles and Saxons under Athelstane.

The Scots were caught and stood to face Athelstane in an area to the north of the modern village of Athelstaneford. The two armies came together at a ford near the present day farm of Prora (one of the field names there is still called the Bloody Lands).

King Angus prayed for deliverance and was rewarded by seeing a cloud formation of a white saltire (the diagonal cross on which St Andrew had been martyred) against a blue sky. The king vowed that if, with the saint’s help, he gained the victory, then Andrew would thereafter be the patron saint of Scotland. The Scots did win, and the Saltire became the flag of Scotland.

One other thing we learned from our local friends was that even though there was a song called Scotland the Brave, the true unofficial national anthem, for all true Scots was “Oh Flower of Scotland”.

Roy Williamson of the folk group the Corries wrote both the lyrics and music for the song. The words refer to the victory of the Scots, led by Robert the Bruce, over England’s Edward II at the Battle of Bannockburn in 1314.

I have several recordings of the Corries and I might be wrong but it feels an awful lot like they were tweaking their neighbors to the south in defiance. I’ll let you be the judge.

That fought and died for

Your wee bit hill and glen

And stood against him

The hills are bare now

O’er land that is lost now

Which those so dearly held

And stood against him

Those days are passed now

And in the past they must remain

But we can still rise now

And be the nation again

That stood against him