Today marks the end of yet another year.

The world has turned 365 more times in its journey and I feel fortunate to have had more good days than bad ones during that time. I find myself in a much better place today than I did a year ago and for that I am grateful.

Time has a way of creeping up on you.

Even if you take the best care of yourself, the elements and time itself play havoc with what we try to preserve. This is just as true of the things we have made as it is to the people that made them. This year saw the 75th Anniversary of many of the most notable naval battles of World War II. Midway, Coral Sea, the seven battles of Guadalcanal, and many other important actions all marked the turning point of the war in the Pacific.

The ships that fought those battles were legendary. Against enormous odds in most cases, the American’s fought back against the Imperial Japanese fleet and stopped their progress. In 1942, that meant that mostly pre-war vessels and their crews fought back in battles that could have spelled doom for many if we had lost.

We have some remarkable nautical memorials

One of my passions is going to visit and learn about the memorial ships around the country that have been preserved. While I favor the remaining battleships as my primary destinations, I will willingly spend hours and hours crawling through everything from destroyers to submarines and the occasional aircraft carrier. We are blessed as a nation that many such monuments still exist and I strongly support the efforts of the many men and women who have volunteered over the years to keep the memories alive.

The ones we didn’t save

Many of the ships I would have loved to have seen preserved were active in 1942. It should not come as a surprise that the USS San Francisco CA 38 would be on the very top of my list. She was unique and had a very storied history before and during the war. This New Orleans class cruiser was commissioned in 1934 and saw the beginning of the war in Pearl Harbor. She quickly showed her worth as the fast moving battles of the first year unfolded. But nothing will ever replace her glory in the night battle of November 13th near Guadalcanal. She was the flag ship for Admiral Callaghan and a small force of cruisers and destroyers that went up against two Japanese battleships.

Out gunned and out maneuvered, she led her brave force into action and paid a ferocious cost. At the height of the attack, she came under close fire from the 14 inch guns of the Hiei and Rear Admiral Callaghan, Captain Cassin Young, and much of the staff were killed in a blinding flash. But the well trained crew, under the leadership of Lieutenant Commander Bruce McCandless and Lieutenant Commander Herbert E. Schonland continued to fight the ship and saved her to fight another day. 77 sailors, including Rear Admiral Daniel J. Callaghan and Captain Cassin Young, had been killed. 105 had been wounded. Of seven missing, three were subsequently rescued. The ship had taken 45 hits. Structural damage was extensive, but not fatal. No hits had been received below the waterline. Twenty-two fires had been started and extinguished.

San Francisco was sent home for repairs. When she returned, she would fight and serve through many harsh battles. She was one of many ships targeted by the dreaded kamikaze weapons the Japanese had mustered. But the Frisco Maru would beat them all and was part of the victorious fleet that finally subdued the enemy. 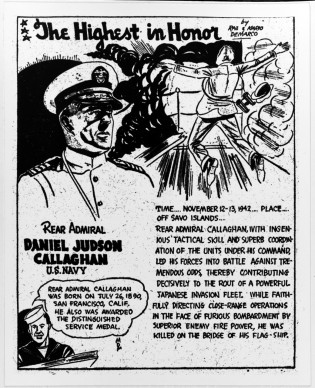 Despite her many accolades, the country ended the war with a surplus of ships. The Cold War was just a short time away from its official start but the cost of maintaining such a large fleet was unacceptable. San Francisco was decommissioned in February of 1946 and in 1959 she was sold for scrap. So were nearly all of her surviving partners. The only physical memory of her now is the rescued bridge section that was saved when she was rebuilt after the horrific battle in 1942. It was a point of honor for the crews of the subsequent USS San Francisco (SSN 711) to visit and pay honor when the boat was in port in the city.

I would have given anything to be able to walk her decks and stand where so many brave men gave their all in a battle that was so notable. So I do understand why so many people do their best to preserve the vessels that have survived. I wish there was more money and more public commitment. But unfortunately, time continues to exact a price and the public is easily distracted. No matter how important a mission may have been, preservation almost always comes down to a few people who do the lion’s share of the work. 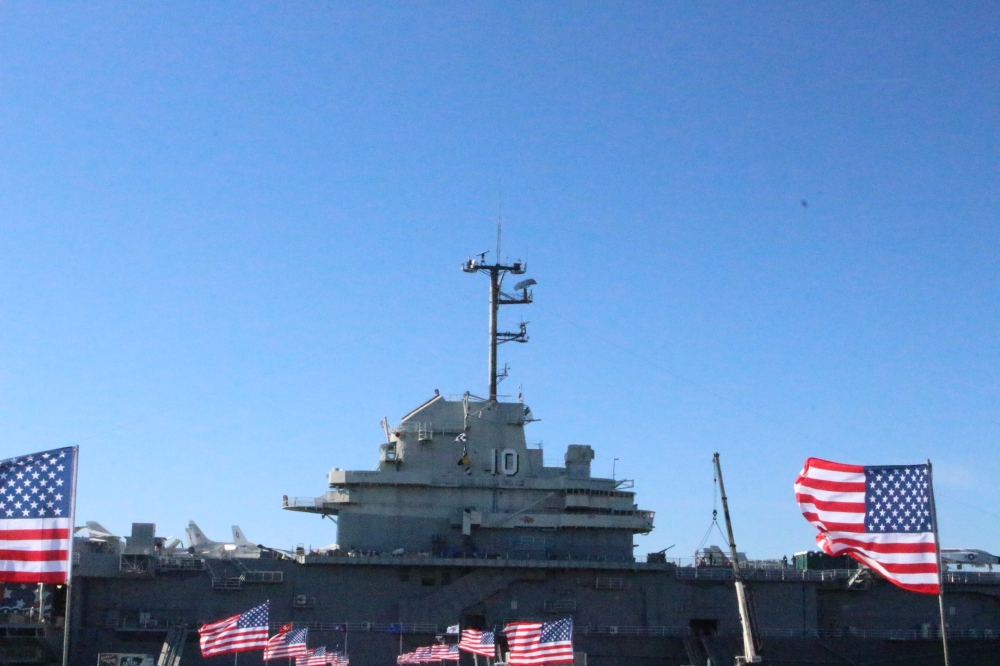 I ended 2017 at Patriot’s point with a fellow retired Chief Warrant Officer. He and I served on the submarine San Francisco in the beginning and we have watched her over the past 37 years. She of course is infamous for a sea mount collision that nearly cost the country a crew and vessel. The loss of our shipmate MM2/SS Joey Ashley still affects those who loved him and recognize his sacrifice with a solemnness earned with such a sacrifice. The 711 boat is undergoing a conversion to a new mission as a training ship and we are all filled with a bittersweet feeling of pride in her continued life but sadness in knowing she will no longer sail the oceans and face unseen enemies.

Time takes its toll on everything.

I had visited Patriot’s Point in Mount Pleasant five years ago and toured the ships and boat located there. The USS Clamagore is a treasured part of the collection of diesel boats on display around the country. Her history did not include service in the war, but she more than made up for that through her conversions to several classes of GUPPY boats and her service helped to pave the way for the submarine technology that would aid the coming nuclear fleet.

How a Docking Officer views the world

Seeing her this week was kind of shocking. I should tell you that one of my roles in the Navy was as a Docking Officer on a floating drydock that primarily docked submarines. Whenever I see any vessel, I often do a mental calculation of what I would have to do to create the “build” for that vessel. The build consists of the blocks topped with wood that the vessel would sit on once the water has been pumped down. It is incredibly important that the docking officer builds a safe crib that support the keel of the vessel in such a way that it will not be damaged.

Like most docking officers, I know that each ship and boat has a docking plan. That plan includes the exact location for each block to ensure maximum safety for the landed vessel. Even an inch or two off the mark could have an impact.

As we approached the submarine, the first thing that was noticeable was the exterior damage near the waterline. While I understand that the damage may not be indicative of the pressure hull, I also know that in order to safely dock a boat, any compromise in the plan would have some impact. I felt kind of sick to my stomach as I saw her tied up next to the pier and couldn’t help but wonder if this would be the last time I saw her. To be fair, the inside tells a great story and you can see the work so many have done over the years. But time is catching up to her.

Can’t we save them all?

I know there is a lot of passion around saving Clamagore. Four of the boats I served on are gone now and both of my surface commands have long since been torn down and scrapped (except for some parts of the USS Los Alamos that are still in use in a civilian yard). All of them served honorable and several made marks on Naval history that should have automatically made them eligible for some kind of living memorial (USS George Washington SSBN 598 and USS Halibut her dual roles as a Regulas Boat and her remarkable role as a Special Projects Boat)

But time and events were not in their favor. They remain alive in the stories that have been written and the hearts of those who sailed on them. There will never be boats like these again. There will never be mighty warships like the USS San Francisco CA 38. But her impact on the war she fought will live forever in the halls of United States Naval history.

In a cemetery in Mount Pleasant SC just up the road from Patriots Point is a marker in a small cemetery for one of my greatest heroes. Captain Cassin Young was a Commander on board the USS Vestal, a repair ship tied up next to the Arizona on December 7th. He was awarded the Medal of Honor that day and his story is remarkable. I will be telling it in detail later this year in a special way. His body is not there however. He was one of those killed on the bridge on the morning of November 13 on the bridge of the CA 38. He was buried at sea along with many others.

It is fitting for a sailor to be buried at sea after such a death. I can imagine the grief the family felt but how much worse it would be to see the burned and fragmented remains that would have had to have been shipped back those many thousands of miles. The family would have a loving memory of their sailor in his glory days.

I do not know what will become of the Clamagore. I hope some solution comes soon. I have to admit that seeing her in such a condition makes me sad for those who have worked so hard to save her. But time marches on. It is the one element that has never been completely mitigated. It makes me wonder about the remainder of the boats and what it will take to preserve them properly. Where is the strategy? What is the plan? Would it make more sense to view each from a bigger picture? Resources are not unlimited but the elements and the weather have no limits.

Every boat tells a story. Every boat means so much to those who have given so much to save them from the scrap yard or reef. The sad reality is that not all of them will be able to be saved.

I am sure there are probably a few diesel boat sailors that will start a “I hate Mister Mac” campaign after this is published. I am sorry for that. This is not intended to say let’s kill this or any other boat memorial. I do not have that power or ability. But I do hope that there is a strategy to remember the boat in a way that is respectful and memorable. I also hope we have a good long discussion about the other boats that are either going through the same challenges or are about to.

If someone does come up with a strategy for stopping time, please let us all know what it is. 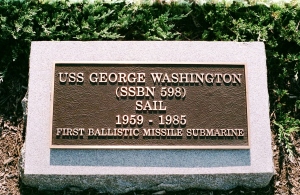 2 thoughts on “The one thing you can’t stop”