Its funny how an old picture can bring back so many memories. Whether a boomer sailor sailed out of Scotland, Guam, Rota or Charleston many of the events they experienced were similar. I don’t know how many hundreds of ballistic missile patrols were made. I am sure there were a lot.

Since the 1960s, strategic deterrence has been the SSBN’s sole mission, providing the United States with its most survivable and enduring nuclear strike capability.

The world’s first operational nuclear-powered ballistic missile submarine (SSBN) was USS George Washington (SSBN-598) with 16 Polaris A-1 missiles, which entered service in December 1959 and conducted the first SSBN deterrent patrol November 1960-January 1961. The Polaris missile and the first US SSBNs were developed by a Special Project office under Rear Admiral W. F. “Red” Raborn, appointed by Chief of Naval Operations Admiral Arleigh Burke. George Washington was redesigned and rebuilt early in construction from a Skipjack-class fast attack submarine, USS Scorpion, with a 130 ft (40 m) missile compartment welded into the middle. Nuclear power was a crucial advance, allowing a ballistic missile submarine to remain undetected at sea by remaining submerged or occasionally at periscope depth (50 to 55 feet) for an entire patrol.

A significant difference between US and Soviet SLBMs was the fuel type; all US SLBMs have been solid fueled while all Soviet and Russian SLBMs were liquid fueled except for the Russian RSM-56 Bulava, which entered service in 2014. With more missiles on one US SSBN than on five Golf-class boats, the Soviets rapidly fell behind in sea-based deterrent capability. The Soviets were only a year behind the US with their first SSBN, the ill-fated K-19 of Project 658 (Hotel class), commissioned in November 1960. However, this class carried the same three-missile armament as the Golfs. The first Soviet SSBN with 16 missiles was the Project 667A (Yankee class), the first of which entered service in 1967, by which time the US had commissioned 41 SSBNs, nicknamed the “41 for Freedom”. 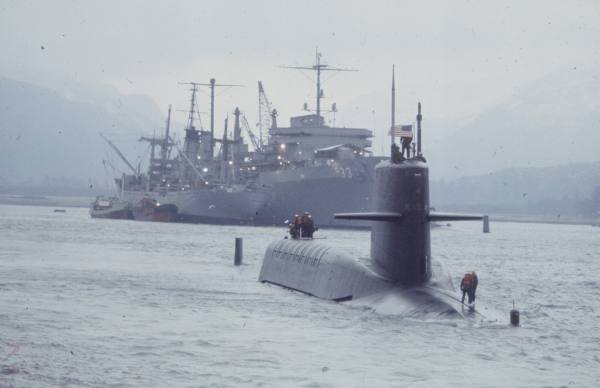 Inside that boat, the sailors and officers were preparing for the first dive after refit. There are very few times in life where something so seemingly simple can be so complex. The vent valves on the ballast tank will open on command but will they close? Are the seals on the hatches cleaned and inspected before closing? What major systems were worked on during refit that might cause a problem? Did you get all of the air out of the hydraulic lines, especially the ones for the planes controls?

For the older guys, a feeling of sadness knowing that it will be sixty or more days before they get to talk to a loved one again. For the new guys, its that feeling of mixed excitement at a first dive and a nagging fear that anyone one of the things listed above could go wrong. For the officer’s its that lurking Russian trawler just beyond the Clyde waiting to give them a hard time on their way to work.

For the tender guys, its just another boat in a long rotation of boats with another one soon to follow. On shore, the people of Dunoon see a shadow filled with customers and men who often drank too much knowing there would be no more drinks for the months ahead. Somewhere back in the states there was an empty feeling in the homes of the families who may have wished that last phone call could have lasted a few minutes longer. In the heartland of America, there was nothing. Not a feeling of something special or different about to happen. Not a fear in the world that some Soviet boat might be at that very minute patrolling near their coasts. Not a streak of an ICBM over the dawn sky.

Because at the heart of it all, men who sailed on that boat and worked on those tenders and docks were so very damn good at their jobs.