How many times have you ever heard the expression Built Like a Mack Truck? For most people in the US, that is one of those old expressions that symbolizes strength and endurance. The trucks that were designed and built by Americans were once the pride of many trucking fleets and rightly so. The story of how they came to their place in the trucking world is a story of America at its best.

The story started with the five Mack brothers and a dream that John (Jack) Mack had in the 1890s as he sailed around the world on tramp steamers. The boys were sons of German immigrants who settled near Scranton PA. The automotive age was just coming into its own but building a truck was something still far from most people’s minds. The idea that something would come along to replace wagons for local delivery and trains for long distance would be a fantasy for many years to come.

The only trucks that were being built were limited in scope and used old automobile parts that were converted or remade. The very idea of having a truck that could haul greater loads was restricted by the roads and streets of the time. The crowded streets of New York, Philadelphia and Boston were better suited to horse drawn vehicles and there were no  “interstates” where large trucks would one day shoot along at the unheard of speed of forty miles an hour (and heaven help us, faster than that).

That didn’t stop the Mack boys though. They actually decided to launch their carriage business in 1893.

1893 was a financial panic year and not a great time to start a business. But the boys saw a need for more efficient transportation and they designed their first vehicle: a bus. They made money repairing wagons in New York until their idea caught hold but once it did, they grew and grew.  They finally outgrew their facility in New York and moved to their long time home in Allentown PA. The old buildings from the World Headquarters that would later be built still stand there today.

From busses, they moved to gasoline trucks. Mack played a key role in the transportation industry for several key reasons. First, their trucks were able to be mass produced and ready for entry into World War I. It was their entry into the horrible conditions of the French countryside that had been battered by war and weather that earned them their name “Bulldog”. The little emblem most people are used to did not come into play until later in the century but the name Bulldog was granted by the Brits and Doughboys that came to rely on them.

At war’s end, the use of trucks for an alternative transportation across country fired the imagination of many. The successful experience of point to point delivery discovered in the combat situations of the western front showed the flexibility and purpose of a truck that could traverse over open land. What if there were “highways” that cut through the hills and mountains of the land?  In 1919, the War Department sponsored a truck convoy that would go from coast to coast.

There were no highways that stretched across the land and the trip was long and tortuous for the 75 trucks that made the trip. A young Army officer kept notes of the entire trip and deduced along the way that a system of highways would be needed at some point to make the trip more accessible. Lt. Dwight D. Eisenhower’s journal is on view at his Presidential Library in Kansas and it is almost certain that riding in one of those trucks was on his mind when he helped to create the National Interstate System in the 1950’s.

Mack trucks developed many other products along the way including vocational trucks of ever nature, fire trucks that were the gold standard, over the road trucks for the coming age of trucking, and busses that far outpaced their early products. Mack reached its pinnacle in the 1960s and added one more strength to its already full workshop of ideas: Brand Marketing.

The Bulldog really came of age when a man named Zenon C.R. Hansen was named President. His experience in the trucking community and the business world helped Mack at exactly the time they needed help the most. The previous years of growth and expansion brought chronic problems such as overextension, profitability issues, and labor stability concerns to the table. Zenon, using his 38 years of experience turned the company around with some courageous decisions.

He consolidated the far flung offices into a World Headquarters in Allentown. Mack’s most profitable years were between the mid sixties and the early seventies when it merged with Signal Industries. Unfortunately, the success was not long lived.

There are many opinions about the demise of the brand. The sale to Renault and the later sale of both to Volvo led to a distinct loss of unique brand identity. The oil crisis and its effect on the entire transportation industry was a major factor. Customer expectations and the ability to custom build vehicles damaged the entire industry. Finally, organized labor’s hold on the industry and the increasing cost of benefits helped to add the final piece to the destructive potion. The Mack trucks of my Father’s age no longer exists as it once did.

The Bulldog was relocated a few years ago to his new home in Greensboro NC. The smaller building that houses Mack is in the shadow of the larger campus of Volvo North America. The truck models Mack is allowed to build are still built near Allentown but the fire trucks, busses, and even most of the famous over the road trucks are now part of history. The old world headquarters in Allentown has some uses but no longer houses any decision makers. If you look under the hood of a Mack these days, the color of the engine is the only distinction between it and its parent company. Time will tell if color is a strong enough incentive for the buyers.

I am eternally grateful to the old Mack family. Dad worked there from the time I was a kid until he had put in over twenty years. 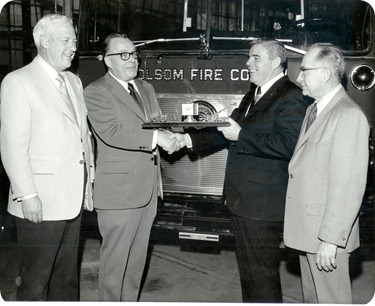 I will always honor the brand as a legacy and a part of America. I hope that the people who are a part of the current Mack family have a successful story to add to the Mack story in the years to come. In my mind though, it would be nice to imagine Mack once more being a fully American product with the ability to do the things John Mack once dreamed of back in 1893. Innovation for the future, self-determination, and a real distinctive product identity that is thicker than a coat of paint.

A boy can dream, right?