I can’t possibly imagine two places on earth that are more opposite then Diego Garcia and Perth Australia.

Finishing up a quick run somewhere in the Indian Ocean and pulling up next to a destroyer tender was welcome after all the excitement, but you quickly come to realize that if there was an end to the earth, this would probably be it. Then a short week later, you surface off the coast of Western Australia and its like being taken back in time to the beaches of California before the developers ruined them. 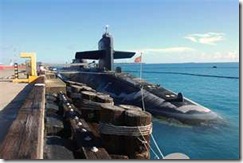 You could actually feel the excitement as we sailed into Freemantle.

I had been to many ports before but Australia was a place where legends were made. After they popped the hatch, the warm sea swept air came pouring in aided by the low pressure blower and ventilation system. As we got closer, the officer of the deck was monitoring events on the pier with number two scope and gave us a description of the group waiting to meet us. The captain called down from the bridge and said “Mr. xxxxxxx, train your periscope to 170 degrees…” He did and had the biggest surprise of his life. His brand new wife was waiting on the pier. That nice woman had flown half way around the world to be with her husband. He seemed so happy… 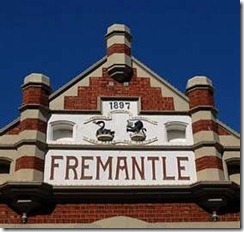 Pulling in was easy and the Aussies were very efficient in getting the lines across and shore power cables ready for us to hook up. I don’t know if it was just the typical post underway correction my eyes normally did, but when I stood topside, it seemed like the biggest place I had ever arrived in. Hardly any buildings, flat, but sun drenched and beautiful. I had exchanged duty with one of the guys back in Guam so would spend most of my time working but that seemed to be okay. Mrs. Mac had joined me for a nice visit in Guam and I wouldn’t have traded that for anything.

Perth and Freemantle had a nice service called Dial a Sailor. They would hook up a phone line and if someone was interested in taking a sailor home for a nice home cooked meal, they would call and we would set up a board for the boys to read through. Then it was up to them to make arrangements. The minute the phone hooked up, it started ringing. It hardly stopped for the remaining time we were in port. I am not sure if they thought our little submarine was a battleship or an aircraft carrier but we could have stayed in port for month and never emptied the board.

My best experience there (remember, I was happily married) was driving the van for the officers. The duty chief told me that I had been selected because of my age and experience to drive the officers van to a celebration being held by the Aussie Legion. I went out to the pier to check out my ride and noticed right away there had been some kind of mistake. The vehicle was defective. They had put the steering wheel on the wrong side. Not only that, but the clutch and brake were improperly mounted too. I called down below to the duty chief and when he stopped laughing he told me I had half an hour to practice in the parking lot.

One note of caution: If you are the duty driver and you come home late at night, mind the wallabies. They are dumber than a box of rocks and still don’t understand that cars kill indiscriminately.

It didn’t take long to master the mechanics of the thing but for the next few days I would struggle with my left hand turns. It seems like someone forgot to tell the Aussies about the benefits of driving on the right hand side of the road and they had placed all their traffic signs backwards as well. I got the officers safely to their party and waited outside. About an hour into the event, these two older gentlemen came out and walked over to the van. Both seemed like they would have been my Dad’s age and we started talking. I told them about Dad’s service and they told me about theirs. One was a survivor of a Japanese prison camp and the other had been on a ship that was sunk early in the war. Both shook my hand and told me they could never thank the Yanks enough for keeping Australia from being invaded.

Its hard for me to even imagine how different the war in the Pacific would have been if we had lost Australia.

A large part of the ANZAC forces had already been fighting in the middle east and Europe so the defenses of the countries of New Zealand and Australia were pretty slim. 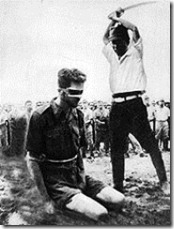 Singapore was the last remnant of British power in that part of the world and its rapid fall meant not only a loss of a barrier but entire armies of Brits and Australians for the duration of the war. The bombing of Darwin with relatively no way to counteract it, threw much of Australia into a sate of panic.

In March of 1942, the Prime Minister stated that “Common sense dictates that we face the fact that Japan will do everything in an attempt to render Australia impotent as a base for an Allied offensive. The Government regards as outright attack on Australia as a constant and undiminished danger.”

By May of 1942, fear reached its peak as the Battle of the Coral Sea unfolded. As the battle ended with Japan retiring back to its base at Rabaul, the national media proclaimed that “Japanese Invasion Fleet Repulsed”. It is significant that in all of the battles and engagements that Australia was involved with only Coral Sea is still annually commemorated on a large scale, through Coral Sea Week.

The Japanese decision to invade Midway and the subsequent defeat by the American’s settled the question of any further advances by the Japanese. The tide had turned and Australia remained available for the ensuing build up of American men, equipment, planes and ships (including submarines).

Bases in Australia were important for the operation of the US Submarine fleet.

During the early part of the war, they were used for guerilla warfare support, reconnaissance, and the beginnings of attacks on merchant shipping. By the end of the war, the significance of having a wide base of operations became evident.

Japan ended the war with a bare 12% of her merchant fleet intact but not fuel at hand to run more than a few of them. A significant part of the battle was influenced by the ability of the Allies to use Australia as a key operating and resupply location (not to mention preventing the Japanese from extending their base of operations.)

I am not sure how much we have really learned from the lessons of World War 2 in Australia. She is on the forefront of any future conflicts with the Chinese and frankly with the drawdowns we are encountering, it will be interesting to see what will happen in the future. Added to that, our loss of manufacturing capability and our reliance on foreign flags for our merchant fleet will make rapid resupply difficult if not impossible.

Anyone who supposes that the resources and control of the sea in the Far East are in any way secure has not been paying much attention lately. I often wonder what it will take to wake up the American people to the danger this time.