I love special holidays. Special holidays are those that let me honor the people who have given so much to ensure our freedom – the members past and present of the United States Military. Without their sacrifices, I would be unable to sit at my desk and write the words that I do in absolute freedom from fear.

On those days, I bring out my collection of flags. Starting with the large American flag that was my Dad’s all the way down to the small flags on wooden sticks. I have flags from all the services, banners, a huge Navy display (imagine that) and one of my proudest possessions is a complete set of signal flags that my Mom made for Dad years ago using nothing but her hands and her trusty sewing machine.

On really special days (Memorial Day, Independence Day, Armed Forces Day) the displays get pretty large. Fortunately my wife has grown to understand my need to decorate and celebrate our freedoms. I am sure there have been times when she wanted to take a small vacation until all the flags and decorations were safely stored back in the boxes.

A few years ago we lived in a quiet little community in North Carolina. It was a nice house with a wooden fence all around the back yard. Angus and Rufus were just puppies so the yard was about perfect for them. The wooden fence also offered a great backdrop to one of my best displays of all time. It was a Navy specific holiday and I may have gotten just a little carried away. It took most of the morning to place the flags just so and by noon, it was done.

Some people would stop and look, some just drove right on by. It really didn’t matter to me much one way or another since the display was for someone else. On that day however, I got to know one of my neighbors a lot better. When I reflect on all that is good with America and its promise of freedom, I think of Zoltan and his wife. They came over that day to thank me for the display. Then we began a series of conversations that taught me another view of America and what it stands for to people who have lived in slavery. 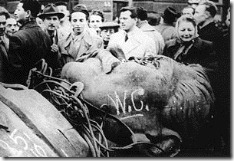 Zoltan and his wife were both in their eightieswhen we met them and both were slowing down. He had come to America with only a suitcase and a dream. His dream was to live in a country where a man could accomplish anything he was willing to work for. They had come from Hungary and it was an event that happened on November 4th 1956 that sent them to find a new life along with over 200,000 of the countrymen and women. Several thousand Hungarians never made it out alive and over 700 Soviet troops also paid a price. 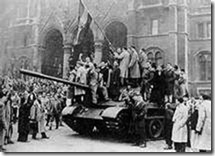 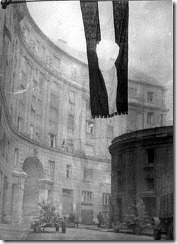 From the 23rd of October to the 10th of November in 1956, the Hungarian people rose up against their communist masters and the Soviets. They had fallen into a sphere of influence at the end of World War 2 that slowly but surely strangled the freedom that so many had looked forward to at the end of the war. By the fall of 1956, a student demonstration poured into the capital of Budapest to the parliament and tried to enter into a radio station. They were fired upon by the State Security Police and word quickly spread throughout the capital. 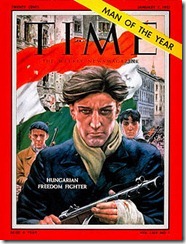 Soon, the revolt spread throughout the country and the government fell. The Soviet troops in Hungary were defeated with the Secret Police forces and it seemed like the Hungarians would be able to wrest control away from their puppet masters. At first, the Soviet Politburo indicated a willingness to negotiate the withdrawal of Soviet Forces and at the last minute changed their minds.

On November 4th, Soviet tanks and armored forces entered Hungary and systematically crushed the Hungarian Freedom Fighters. The fighters pleaded for outside help but none was sent from any of the Western Powers. The after the fact records reveal that there was too great of a fear that the Soviets would use their nuclear weapons and no one on either side wanted to turn lose that monster. By November 10th, the revolution was completely destroyed and the Soviets ended up solidifying their hold on all of their border countries. For many, this was one of the darkest chapters of the Cold War.

My neighbor and his wide were among the many who escaped to freedom. They had family in the United States and they managed to work their way through Switzerland and obtain a visa to come here. He was a dentist by trade so it didn’t take long for him to not only establish a practice but purchase a modest home for his family. They learned English and adopted their new country in a way that is typical of many of the emigrants who came here seeking freedom. Zoltan told me on more than one occasion that he struggles with the concept of young people seeking to change the country to a socialist or worse political system. Why would anyone willingly give up freedom for slavery to the state?

“If you have ever lived in a country where tanks can freely travel on city or country roads to hunt and kill your fellow citizen’s, you would do everything you could to seek and protect your freedom.”

I have known many people who talked about patriotism in my life. I have never met someone who cherished freedom and the country that gave it to him. Maybe its because he had seen the men with bayonets coming down the street. Maybe seeing your flag ripped down by jack booted thugs was too much to bear. Maybe the sacrifice of watching your wife and children shivering in a cold winter shelter waiting for a hoped for pass to freedom drove a deeper sense of meaning into him. But my friend Zoltan had tears in his eyes the first day he came over to my yard to tell me how much he loved the display.

The occupy “whatever” people are a shameless group of hypocrites. Those that cowardly hide behind their movement to advance socialism and worse should have spent a day or so with Zoltan. Perhaps they could have had the same feeling I had after hearing his stories.  I miss him, but his memory will stay with me forever. 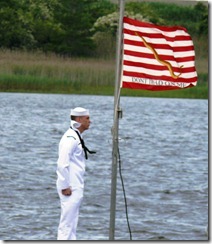 I am not ready to give up my country to selfish whining children who don’t want to honor the debts they incurred. I hope you agree.