Belgium is a beautiful country. The people there are wonderful and kind and very gracious hosts. I visited the city of Ghent recently and frankly of the 600 or so cities and towns I have visited, Ghent is one of the most amazing and beautiful places.

June is a good time to visit since all of the shops are open and you can sit at any of the hundreds of street side cafes and enjoy one of the many Belgium beers.

Unfortunately for Belgium, she is geographically inclined to have been a focal point for some of the worst conflagrations of the 20th century. In fact, you could say she was the crossroad where traditional enemies meet.

Neutrality – How sweet the sound

In 1914 Belgium was considered the least prepared for conflict of any of the nations in Europe. She was protected from any potential invaders by a series of forts. 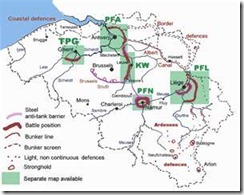 Unfortunately, she had not kept up with changes in technology or weapons. Her army was displaced in such a way to try and maintain her neutrality. So when the Germans carried out a surprise invasion, Belgium was not prepared to defend herself in any meaningful way. Instead it relied on political activity and pieces of paper signed by all of the potential warring parties.

One of the things the Belgium government tried to do as they faced the imminent invasion was to protect its people by disarming them. Perhaps realizing that hunting rifles were no match for an organized army their own government issued proclamations ordering people to surrender their firearms and warning the populace that the invaders would kill anyone found armed.

On the morning of the invasion, the Germans met with little resistance. The price for the unarmed Belgians? The invaders killed thousands of them for no understandable reason. Men, women and children were put to the sword or shot in short order and their villages burned to the ground.

Those who fail to remember the past

World War 2 found little Belgium no better prepared. The blitzkrieg of the third Reich rolled over the crossroads of Europe with little resistance and the savagery was almost as bad. That probably explains why post war Belgium has been so reasonable about becoming the center of the NATO Alliance.

There have been a number of times that America has found itself at the crossroads. The War of 1812, The Civil War, Civil Rights, Women’s Rights, The World Wars, Terrorist Attacks on our homeland and so on. These are examples of testing that our country has endured in its quest to become a more free society that guarantees the rights of all of its citizens. Mistakes have been made along the way, but with God’s grace, we have always found our way back from the abyss and grown as a stronger nation.

We are at another one of those crossroads now in America.  Decisions that a majority of the voters in America make will effect our existence as a nation. The division of our people into two distinct visions of the future has been accelerated by recent events. One side would allow Americans to continue to live in freedom and limit the government’s power. The other would have America completely reliant on a centralized government controlled by people who think they know what is best for everyone else. The second group would only allow freedom as it related to allowing the ruling government to succeed.

Many people are not aware of the fight that went on during the construction of our Constitution. There was turmoil between the slave holding states and those that thought of it as an immoral practice. The agricultural south needed the amount of labor it gained form the slaves and the north was more concerned with its industrialized focus which required no slaves.

Many men, like Alexander Hamilton wanted nothing to do with a “Bill of Rights” as a part of the ruling doctrine. In his mind and those like him, States Rights and individual rights should not be limited by this short list of “Rights”. All of those rights were inherently God given and the mere existence of a “Bill of Rights” could be seen as a limiting feature not a method to individual and state’s freedoms. His greatest fear was that future generations would interpret the document as one of exclusivity for anything not specifically covered. His fear is our reality.

For decades, the Supreme Court has been at a balancing point. This point is between people that believe the government has exceeded its charter and idealists who believe that the federal government has not gone far enough. At a state of the union address not long ago, the elected leader of the free world showed his contempt for the existing Court in a way that has never been done in the history of the Republic. He was openly joined by members of the majority party who sought to intimidate the future decisions of the court through bullying. 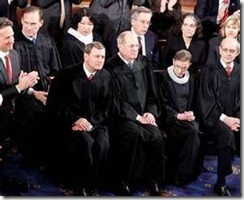 No matter what side of the spectrum you are on, this should have sent a cold chill up and down your spine.

The President’s wife spoke to a small group of wealthy contributors in Providence, Rhode Island during a recent fundraiser. Here is one comment that I can absolutely agree with her about (except for the “brilliant” part of course):

“We stand at a fundamental crossroads for our country. You’re here because you know that in just 13 months, we’re going to make a choice that will impact our lives for decades to come … let’s not forget what it meant when my husband appointed those two brilliant Supreme Court justices … let’s not forget the impact that their decisions will have on our lives for decades to come.”

That is an opportunity for some in America to fundamentally change how we live and how our country will be ruled in the future.

The threat to many others is that this “utopia” has already proven itself to be a false promise of hope that will weaken us as a country. They earnestly believe that the country will be at risk in a way we have not seen since the Civil War.

During several recent rulings for instance, the vote for individual gun rights was only held by a margin of 5-4. The telling statements from the liberal judges were that they do not believe in individual gun ownership rights. Their statements indicated that given the opportunity, they would break that bond that has existed since the beginning of the country.

The Supremes could essentially wipe out our freedom and liberty with the stroke of a pen. The President now has control over the countries communications networks, the internet, the Justice Department (including the FBI and related investigatory groups), the Military, NSA, and every other agency either directly or indirectly. In a National Emergency, he has the ability to deny Habeas Corpus to citizens for an unlimited amount of time. Under a rogue ruling, the Commerce department could shut off the flow of arms and ammunition to all Americans.

The question you should ask yourself is this: If the Supreme Court rules that individual rights (such as gun rights) are no longer valid, what rights will go next? If the populace is unarmed, who will stop those rights from being removed?

We have already seen glimpses of an uncontrolled government that is not responsive to its people. A centralized government made health decisions for its people. Food and supplies were regulated for the people’s good. Choice was no longer a threat to security since the government decided everything from where you could travel to where you lived. Spending was out of control with no inhibitions. And a ruling class emerged to manage it all.

I am proud to have spent the majority of my life directly helping to end the evil reign of the Soviet Union. I will be damned if I will let them be reconstructed in this country.

The Tree of Liberty stands on a hill

it’s strength reflects a nation’s will.

Through storms and seasons it survived

To show that freedom was alive.

Now some would take that freedom back,

that tree will bear the first attack.

Come Patriots, Men and Women all,

hear the cry of freedom’s call!

Will you protect her with your all

or will you let her burn and fall.

Your votes still count beneath her shade

but once she’s gone, your freedom fades.

Replaced by chains and shackles strong

your children will be slaves not free

forced to serve an enemy.

Now stand with me around that tree

lock arms until our victory.

Raise high the banners one and all,

2 thoughts on “There is a Tree at the Crossroads”