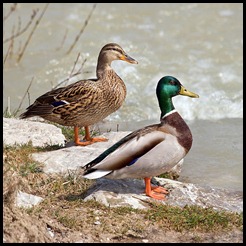 I like ducks. Specifically, I like Mallard ducks. I have no particular problem with other types of ducks and have been known to dine on a few domesticated members of the duck family, but Mallards are my favorite because they are wild and live a relatively unstructured life. They have some characteristics that make them easy to like. One of the best characteristics is their ability to seem calm even in the face of all manners of storms.

I think people in business (and in the New Navy) could learn a lot from ducks too. Dr. Deming is famous for his 14 points which was first recorded in his book “Out of the Crisis”. He is widely thought to be the father of TQM (Total Quality Management) and his work is still being studied and used all over the world. He also left a legacy of warning businesses about things that would make them fail or at least not reach their highest level of achievement. Those ideas are known as:

The “Seven Deadly Diseases” include:

I like to look at the first item on this list from a Duck’s perspective. Humor me, it actually makes sense if you open your mind to it.

Lack of Constancy of Purpose

If you have been around business (or the Navy) for more than a few weeks, you have seen this disease in play. Every other day there are new demands and new objectives being sent through the pipeline. The bigger the organization, the worse it gets. Its almost as if the competing departments are trying their best to drive the ship in their own separate directions in order to justify their existence.

Every time you force people to change their focus on some new program that may or may not be related to the key objectives of your organization, you are diminishing their efficiency. The energy required to gear up for a new initiative actually is compounded by the fact that a certain amount of energy will be needed to slow the emphasis on the last initiative. Plus, depending on the size of the group, you probably lose about half of them each time you pull them away from the previous effort.

The mallard is completely focused on its purposes: survive and multiply. All of the mallards activities are centered around the things which will ensure their own safety and continuation of their species. They don’t really have to think about it and you can be sure they do not have focus groups or planning retreats to understand what the mission is. If they allow themselves to get distracted by non-value added activity, they die. The sad truth is that in this world, we are all part of the food chain. We have evolved quite a bit over the centuries to be more civil and less aggressive, but at the end of the day, my survival depends on my ability to do something better than the next person.

Its not fair, it shouldn’t be that way but in the end, if you want more customers, you may at some point need to take some from your competition. If you are competing against a “duck” you are in trouble if you are not one yourself. You may have heard this quote in the past:

The mallard stays focused in the rain or when the sun is shining. It does not allow itself to lose that focus even when threats are near. Part of its defense is not allowing the circumstances of the moment distract it from the key purposes for which it is designed.

One other very important thing about the mallard is that it has a sort of secret weapon in its struggle to survive. Being able to fly is part of its existence but being able to float is even more critical since the sources of food for mallards are waterborne plants.

The duck may be shaped like a boat because it happens to be a duck… but that doesn’t mean it will be automatically waterproof. Duck feathers are made up of tightly woven strands that link together microscopically. The secret is that they have an oil gland that produces waterproofing material for the feathers. But even with those features, it still wouldn’t be very buoyant without one thing happening:

Hours of focus, day after day, they apply small amounts of oil from a gland near the tail, and carefully apply it to every feather while  smoothing those microscopically fine links together to form a watertight barrier.

Without that daily, hourly, dedicated activity, ducks will and do fail at swimming. Ducklings drown because they haven’t perfected the art (nor do they have the fully mature physical capability) of oiling their feathers. And occasionally, adult ducks get lazy, stop oiling their feathers, and sink.

I most envied the duck for so many years because I liked the way things just seemed to run off their backs. Like stress. In fact, that was the reason I had a mallard on my office desk to remind myself to just let things roll off. I guess I assumed it was automatic. Now I understand that the ability to let things roll off takes a lot of daily work. You need to be constantly working on staying focused and not let the stuff around you make you lose that focus. Eventually, you may get to the point where you can float but its important to remember to be proactive in getting to that point. 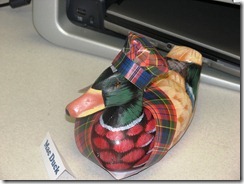 I recently passed the duck along to a colleague as the newest member of The Royal Order of the Duck. I hope he continues to serve as a visual reminder that being waterproof in life’s storms is important and it takes work to maintain. But at the end of the day, floating is better than sinking. 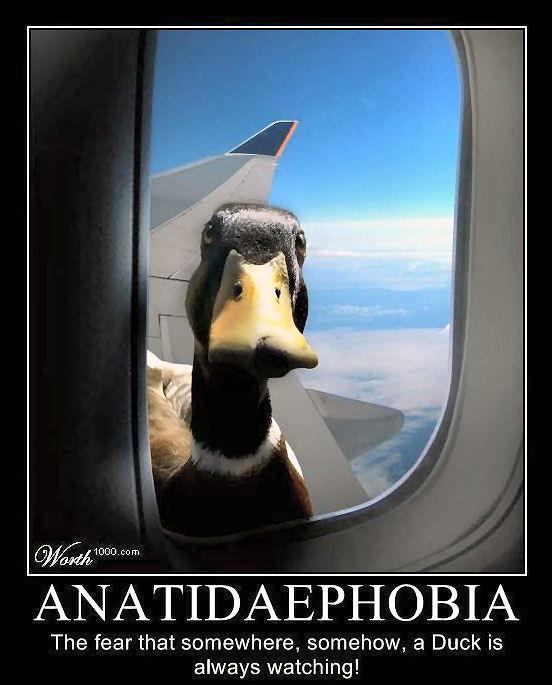 2 thoughts on “The Royal Order of the Duck”