Zordon’s last words: “Andros, listen to me. It is your duty as a Power Ranger to save the universe. Now is the time.”

One of those quirky moments in my post retirement career as a highly paid consultant (insert laughter here) was an assignment in southern California giving a maintenance training session to some operators from a plant in the Midwest. The fact that we were in Southern California in the first place using a rented facility was kind of interesting since both the company I was working for at the time and the company we were training were located a very long distance away from there.

I will have to assume someone from their union was a master boon-doggler and convinced some unsuspecting projects guy with more budget than brains that this was the only possible place in the universe that these classes could be taught.

Next door to the building was another warehouse looking place that looked pretty non-descript until you saw the people working there. (At this point I will ask all submarine sailors to take your mind out of the gutter… California is known for other types of film and TV projects).

My first introduction to the “characters” next door was seeing the Blue Ranger and the Pink Ranger out on the fire escape catching some California sun between takes. Talk about a Hollywood moment. The empty costumes of their opponents were hung just inside the front door and somehow they didn’t look as intimidating with no actual person inside. I do have to admit to not watching the Mighty Morphin Power Rangers much but seeing the actual characters just hanging out does kind of take some of the magic off the idea. 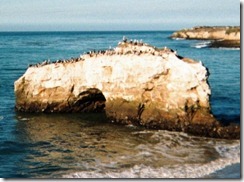 That night at the hotel, a few of us were sitting around talking when one of the frequent earthquakes kicked in. It wasn’t a very big one but it did rattle the table at poolside and the lights flickered on and off for a bit. Since all of us were on upper floors of the hotel, the use of an elevator would certainly have been impacted by the loss of electricity. Looking out over the freeway, it also occurred to me that getting out of dodge might pose some problems too. We all kind of wondered what the plan was if there was a big one that night. I will have to admit not sleeping as well as I normally do.

I had completely forgotten about that evening until this afternoon when Debbie brought in an advertisement for a power generator company nearby that is offering an off-season discount for one of the new LP gas units. Since this is Hurricane season, I thought I would check out the product and give you some feedback.

First, a disclaimer. Like any major product purchase, you should investigate thoroughly what you will consider based on your needs. You should also look at all safety requirements and precautions since it will be your actual house. (There, now you can’t sue me.) But I thought some of the findings were interesting enough to pass along as thought starters and hope they do so.

The first question is, Do you really need an alternative power supply? While I am sure that having the X-box up and running may keep the grandkids from being too bored might be important, that probably isn’t your first concern. We have lived in hurricane country, tornado alley, super snow regions and earthquake center points. But we were a lot younger then and probably didn’t have much in the way of spoilable food anyway. Now however, we keep a bit more on hand based on the way we shop so losing electricity would have a pretty good impact pretty shortly.

In your planning, do you have special health needs or considerations that might require climate control? As we age, we seem to pick up more and more health problems and frankly enduring heat or cold outside becomes more of an issue for people with chronic problems. What if you did lose heat for three or more days? Do you have an alternate source of fuel or heat? Plus, for those that have ever spent a day and night in sweltering humid heat after several other days of sweltering heat know that the respiratory systems of some members of your families will be challenged.

Speaking of heat, you do know that even if you have gas heat, it requires some kind of electricity for controlling the blower, right? Besides heat, how you get your water may be just as much of a priority. Anyone who has ever lived in a community where individual home well water was the main source understands that the loss of power not only sucks, it affects your ability to wash, drink, and flush (the big three when your are talking about personal water).

Your location will also effect your decision making. If you live in a temperate climate with absolutely no fear of any power disruptions, good for you. Come back tomorrow when we cover emergency kits. For the 99% of the rest of you, please stick around for a bit more.

I normally go to the experts when it comes to consumer products and as most people will agree Consumer Reports probably has the most stuff to review about what will work in your case. I have no intention of repeating everything they have to say, but will tell you that after going to their web page and finding a report on Backup Generators, I now feel like I can make an informed choice that will fit our needs.

In our case, I need something that will automatically kick on without me having to go outside and getting it set up. I don’t want to be standing in sub-zero weather trying to pull start a machine that is just as cold as I am. Plus, having been around enough gasoline powered generators, I know they run out of fuel pretty quickly so somebody is going to be back out there filling the bad boy up again at some point.

Nope, the one we are looking at for our house is pretty close to the LP gas model we saw. It can run for days, it has a higher wattage capability and frankly, it’s a no-brainer for our point in life.

Some good points to ponder. If you do go with the smaller gasoline powered units, you may be surprised how much gas you need to have on hand (and treated) in order to keep the appliances and devices in your house running. Plus, carbon monoxide is a big deal in many situations so make sure you follow the precautions on any type of unit. Finally, have an electrician install a transfer switch to your unit since a generator should never be connected directly to your home. 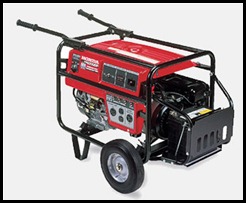 Review all of the safety precautions listed on the unit and use the safety information located at the Consumer Reports website.

Hopefully, you will never have to use your preparations for more than a few days. But be assured that once the event occurs, the cost of those bad boys goes up significantly and the availability will be a pretty big challenge too. The time for planning is not after the event is already in progress.

One thought on ““May the Power protect you.””