This story from the Washington Star Newspaper from May 18, 1942, brought back a lot of memories for me.

The first part certainly takes me back to all of the training I received as a young man in the Navy.

Over the course of my career, I attended over 60 Navy schools related to technical subjects, leadership and education.

The Navy has always had systems in place to make sure the young people that man the ships and craft can learn what they need to do to make the mission successful. In the old days, that would be deck-plate training where knowledge and skills were passed along from the older experienced hands.

That all changed in the early 1900s when a new Secretary of the Navy named Josephus Daniels came along. He recognized that the technology was increasingly getting more complicated and he encouraged the establishment of more formalized schools. From the Naval Academy to shore stations around the country, technical training became more and more important.

This forward thinking was directly responsible for the creating those schools paid off as the country found itself suddenly being drawn into the First World War. It was even more critical at the beginning of World War 2 as many more men were suddenly called up to man the large waves of ships, aircraft and submarines that would be needed in a two ocean war.

This story from the Washington Star newspaper is about one of those schools. The men identified as technical trainers nearly all came from the submarine community. Since the submarine force was the most experienced technicians, they contribution to the training effort was irreplaceable.

When Rudolph Diesel of Munich Invented his internal combustion engine about 1900 he was to give Germany one of its excuses to believe it could conquer the world. Industrialists and military men agree that, without oil-burning Diesels, Adolf Hitler might have been unable to send panzer divisions of such strength riding over Poland, the Low Countries and France. Reason: Lack of gasoline.

For more than 30 years the Diesel has been available to American engineers to develop, to make lighter in weight and yet add horsepower. But America was slow to concentrate on the engine. Uncle Sam has used it for years in submarines but only recently has he gone all out on Diesels to supplement the war program.

More and more sub-chasers, net tenders, cargo and running ships are being Diesel-powered. There still is an overwhelming majority of gasoline-driven tanks and armored cars being made but the Diesels are rolling off the line, too, and in greater number than ever before.

The Germans, it is said, were using Diesels in mobile machines while we were employing the engine only in stationary plants. This chiefly was because in this country it was difficult to reduce the weight, which formerly ran between 200 to 300 pounds per horsepower. Now American engineers have cut it, to 17 pounds per h.p.—or less. Whether the United States will get around to installing Diesels in warplanes in time to fully test them in this war remains to be seen. Germany is reported to have powered its Junkers with Diesels, lightened to 1 1/2 pounds per horsepower.

The Navy, wholly alive to the value of the lightweight Diesel, is buying up all of the engines it can get, but there is another problem: Experts to run and repair them. That’s why here on the Norfolk Operating Base the Diesel School is running full blast and two shifts a day. Whereas the Navy formerly turned out 50 graduates a month, it now is producing 200 to ship all over the world.

The Diesel school is not the romantic spot at the operating base. It is a plain brick building filled with men in blue denim. Grease-smeared gobs peer without expression into the innards of a dozen different engines. But without men to man the oil engines of subs and converted aircraft carriers, and to care for the auxiliary Diesels of the battleships and cruisers, Uncle Sam’s new Navy wouldn’t be 100 per cent effective.

Raw recruits are not considered as candidates for the school. Under Lt. Harry M. Rudio of Washington and a group of tough petty officers, all former submarine men with 14 to 30 years of experience in the pig boats, the eight-week course is so geared that only the Navy’s better mechanics make the grade. Many of the men now taking the courses were at Pearl Harbor December 7.

Why this new emphasis on the Diesel, aside from gas conservation? Greater efficiency, argue the pro-Diesel men. And greater safety.

Anti-Diesel men argue that Hitler’s panzers are powered with the oil-burners only because of the lack of gasoline. The pro-Diesels don’t deny that the Fuehrer may have had a shortage in mind. “But we figure the Diesel is 30 per cent more efficient than gasoline engines,” says Lt. Rudio, “and there can’t be much argument as to the greater safety. The Diesel uses oil for fuel and there is no spark system – simply igniting of the fuel as a result of the high compression.

“A gas-powered tank, armored car or any other vehicles is not dangerous as long as the fuel tank is filled. But as the gas is used you run into vapor which forms a combustible mixture. An incendiary bullet won’t hurt a full tank, probably except to make it leak, but an incendiary, plus that vapor, is something else.”

Sub men, like Lt. Rudio’s petty officers, make outstanding Diesel instructors. They know the engines and they know what they can mean in emergencies. At New London. Conn., however, is the submarine school. Here is only the surface school, although loaded with pig boat veterans. Lt. Rudio, only commissioned officer left here now, is the lone exception. In the Mexican campaign in 1916 he was an Army flyer. In two years in France he was in the Army Signal Corps. In civilian life he was a crack engineer, one of the many called by the Navy.

No sub man, he is thoroughly sold on Diesels—and the Naval Training Station ball club, headed by Bob Feller. Lt. Rudio is baseball officer and sudden heir to what he has been looking for all spring—a shortstop. He’s getting Al Brancato of the A s and now he figures the N. T. S. outfit, winner of 22 of 24 games, “is ready to roll.”

Diesel men are like connoisseurs of old hams or juleps: they draw fine distinction lines and hew to them. For example: “Send Chief Brown here,” says Lt. Rudio to a yeoman in his office. Chief Petty Officer E. L. Brown, beached because of faulty hearing after 14 years of sub duty, appears. “What about the Diesel?” asks Lt. Rudio.

“Well,” answers Brown, “our old A, B and C subs had gas engines and we were scared stiff most of the time. Fumes, explosions and menaces like those. Then the French built a helluva big sub that ran by steam. It went down—maybe you remember reading about it. None of us minded the life on Diesel subs.”

“Don’t get me wrong,” concluded Chief Petty Officer Brown, “I’ve been scared plenty of times. Once we caught our bow under a coral ledge at 161 feet. Another time we had fresh water in our tanks and hit lighter, salt water by accident and dropped to 186 feet before we could stop. But these are long stories.”

The beginning of the war was so swift and unexpected, many young men got swept up in wanting to avenge the sneak attack that cost so much in lives and ships. Baseball players were no exceptions. Strong, young and athletic, they were prefect candidates for the military. But using ball players to help train and entertain the troop was a great idea.

A prodigy who bypassed baseball’s minor leagues, Feller made his debut with the Indians at the age of 17. His career was interrupted by four years of military service (1942–1945) as a United States Navy Chief Petty Officer aboard USS Alabama during World War II. 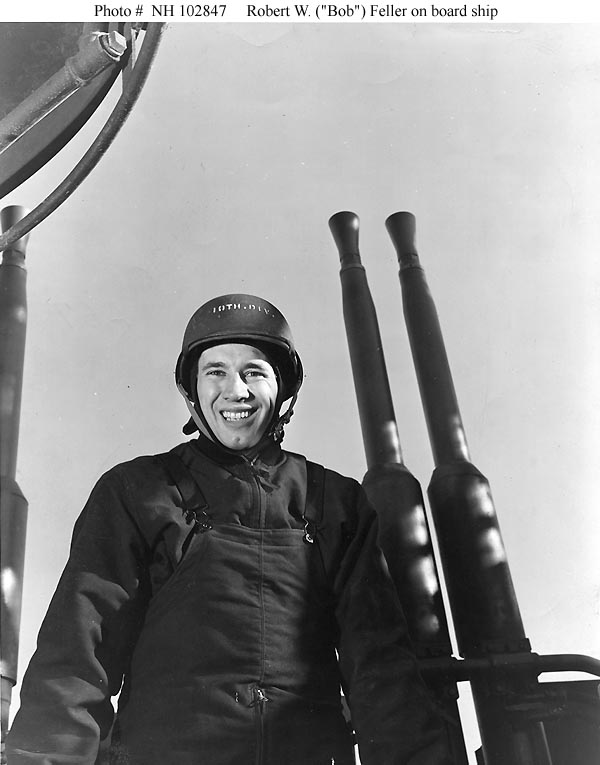 The United States entered World War II with the attack on Pearl Harbor on December 7, 1941. Feller heard about the bombing while returning from a visit to his terminally ill father at Des Moines to Chicago where he was to sign a new Indians contract. Two days later, he volunteered for the United States Navy, becoming the first American professional athlete to enlist. Originally he tried to enlist as a fighter pilot but failed hearing tests. Feller attended basic training at Norfolk Naval Base and served as a physical fitness instructor there. He also pitched in baseball games hosted by the military. Although he had received a military exemption owing to his father’s failing health, he wanted to serve in combat missions. Feller said, “I told them I wanted to … get into combat; wanted to do something besides standing around handing out balls and bats and making ball fields out of coral reefs.” Feller was assigned to USS Alabama; he had hoped to serve on USS Iowa, but it would not be commissioned for another six months after Alabama, joining the fleet February 22, 1943.

Feller pitched for the Norfolk Naval Station’s Bluejackets baseball team, which went 92–8 in 1942.

His career in the majors was interrupted by military service in the U.S. Navy during World War II. Brancato served in the Pacific theater and played on the Navy’s all-star baseball team, composed of Major League players in military service. While entertaining the troops at the all-star games, Brancato appeared alongside Joe DiMaggio, Phil Rizzuto, Bill Dickey, Tom Ferrick, Bob Feller, and Eddie Collins, Jr.

Baseball and my Dad

I wrote a book years ago about my Dad’s service in World War 2 and one of the stories was about his brief baseball career in Boot Camp. There was a letter to his Mom and a copy of the roster for a ball game that his team played against the Boston Sox in an exhibition game. I didn’t even know my Dad played baseball but he was a pitcher for his outfit and had a pretty good record.

We never played when I was a kid. He was more into football by the time I was big enough but I was never strong enough to play football. To be fair, my little league career was kind of short as well. And when I say career, that is being overly generous too. My permanent position was right field and I am sure the coach and I shared the same private prayer every game: please don’t let them hit it to right field.

I was happy to leave my fourth submarine and for directly to a training facility in Bangor Washington. The Trident Training Facility was an amazing school where the finest technical schools and education for sailors was centralized. I started out as a technical trainer, advanced to teaching administration classes and eventually got tapped to train other trainers. My last assignment was as the Lead Instructor for Instructor Basic Training. I really loved that job.

I made Chief Petty Officer and shortly after that achieved the designation of Master Training Specialist. They also encouraged us to take college classes and I eventually ended up with a Bachelor of Science degree in Workforce Education Development. Not bad for a kid who almost flunked out of high school. 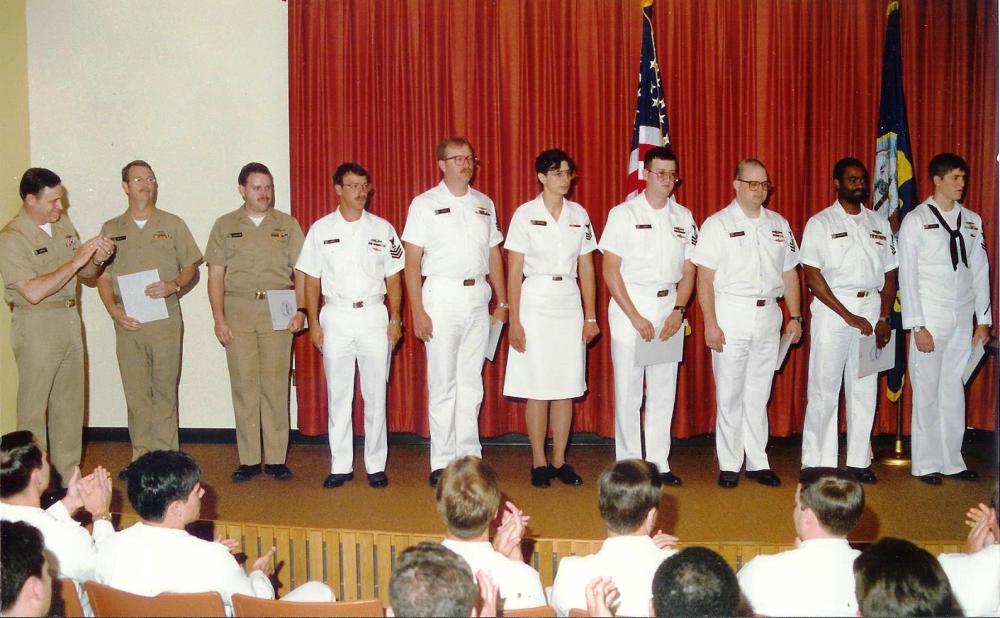 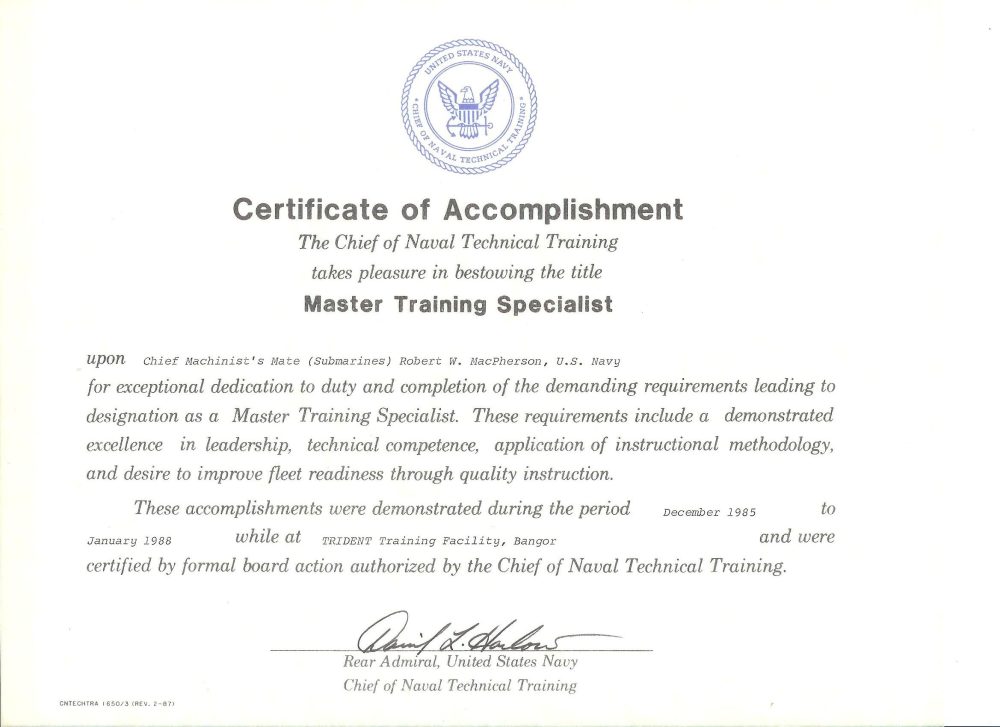 I’ve pretty much been doing some king of training ever since. All because some guy named Josephus Daniels had a vision.

Well that’s it for today. I am getting ready to go back into the workforce again for a few years. The stories will be a little scattered but I intend to keep writing as long as I can find the time. In the meantime, thanks for visiting.