Would you do it again?

As I have written before, so many people have the same reaction when you tell them that you were a Submariner. “Oh, I could never do that.” You just give them a certain smile of understanding and know that they are probably right. It takes a certain kind of crazy to knowingly put yourself through the things you went through to become a qualified Submariner. But would you do it again?

In so many conversations over the years, my suspicion is that many of my submarine friends would in a heartbeat. But it does make me wonder why. 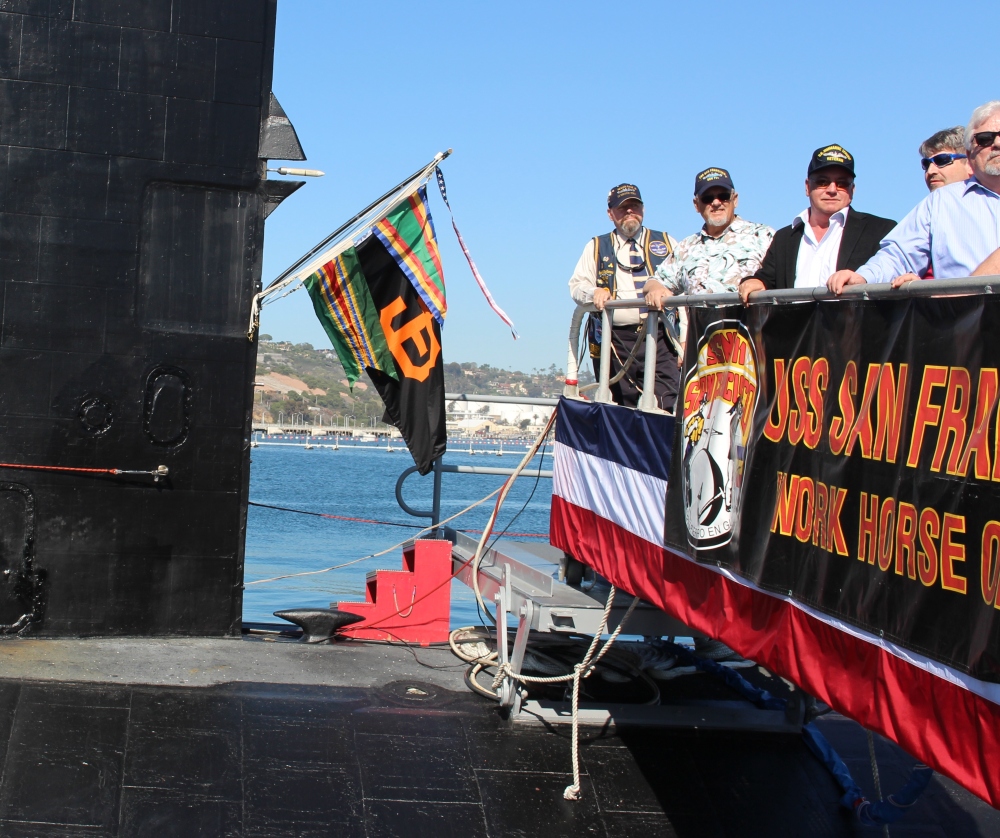 This year coming up is a landmark year for me and for some important parts of my history. I will turn 65 in May and two of the boats that I have been associated with are coming to a new part of their journey. My third submarine, the USS San Francisco will emerge from her cocoon in a Virginia shipyard as the new Moored Training Ship. Her days of sailing the seven seas and high adventure are long since gone and soon she will be a platform to teach the next generation of sailors and officers about how to manage the power plant that remains. I’m told by friends that know that she is no longer recognizable in her former glory but she will do very nicely in her new role.

The other boat is one that has a personal connection despite the fact that I never served on her. The San Francisco’s sister ship USS Pittsburgh will be decommissioned this summer. Pittsburgh has many nicknames to the various crews through her years of service but I like “Heart of Steel” best. My Dad was one of the people from the city of Pittsburgh that got to see her commissioned. She was launched on 8 December 1984 sponsored by Dr. Carol Sawyer, and commissioned on 23 November 1985.

Pittsburgh had the distinction of participating in an actual shooting war. On 2 April 1991 Pittsburgh and Louisville conducted submarine-launched Tomahawk missile attacks against Iraq during Operation Desert Storm.

USS Pittsburgh departed in October 2002 to deploy in the Mediterranean Sea. There, she again fired Tomahawk missiles into Iraq during Operation Iraqi Freedom. She returned from that deployment on 27 April 2003. My Dad had passed away ten years earlier on that exact same date but I know he was watching from heaven as “His” boat returned victorious from another mission. Dad was a Navy man once, last, and always. 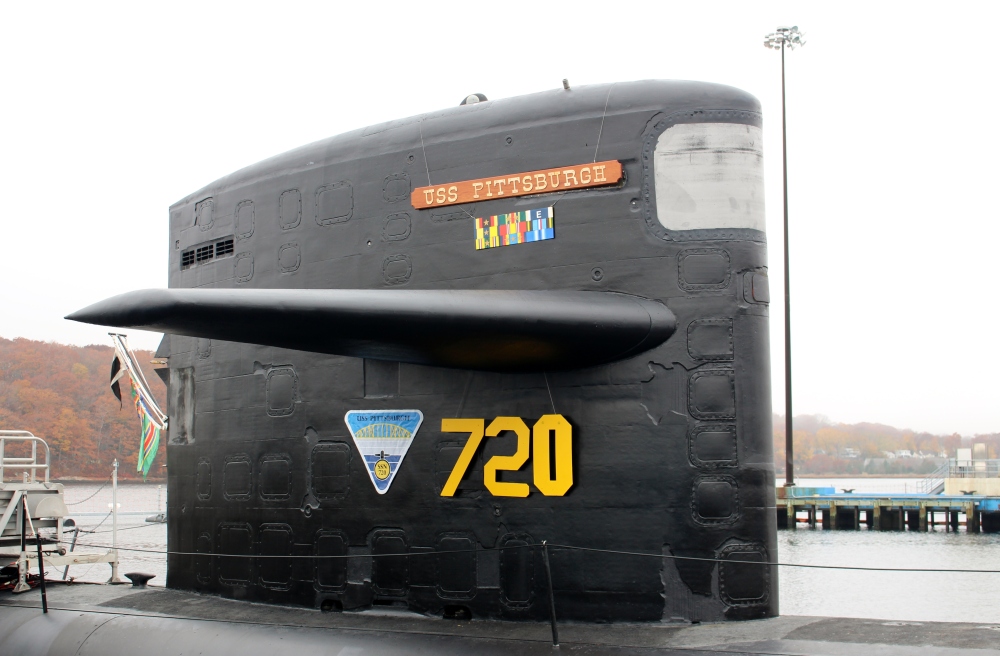 I guess his son is too. There are not many weeks that go by that I don’t want to be back on a boat someplace in the world on a mission. To be honest, it was the most meaningful part of my life.

That is not to say the rest of my life has not had meaning. I have had many travels and seen so many places in the world. I have been part of a few organizations where I tried to make a difference. Church. Non Profit groups. Political groups. But none have ever had the intensity or purpose of being on those boats in faraway places.

I’ve tried going back once or twice. The Navy wisely recognized that my age and limitations would never actually be needed again for anything really important. But I got a chance to see the San Francisco one last time before they started tearing her apart. The things that I observed were that while some things were exactly the same, others were really different.

Size. Climbing down through the forward hatch, I was hit by the old familiar smells and sounds. But the size was very different from what I remember. The passageways and spaces were much denser and smaller. Going through certain parts of the boat seemed like they had shrunk precipitously. In the many dreams I have had since I left the boats, those same spaces seemed like they were much bigger and roomier. Maybe they seemed like that because of all the hours it took to field day them back underway.

Smell. The smell on a submarine is nearly the same no matter how old they are. I have toured a number of museum boats including Nautilus and our home boat the Requin in Pittsburgh. But each has a very distinct smell that seems to be associated with all submarines. It’s so strong that it stays on your clothes even when you leave the area. I have often thought that bottling that smell would be a great gift for reunion meetings when guys started getting too nostalgic. A couple of sprays might just bring us back to reality. Or make some guys want it more.

Sailors. The biggest shock to my system when I have visited the Pittsburgh or on the trip to the San Francisco was how young the officers and crew were. I don’t mean like just a bit younger, I mean like “are you old enough to drive this thing?” young. Looking out at both crews standing on the piers during ceremonies, I was struck by how very young they all looked. It’s as if someone went into a high school, picked out the largest groups of boys they could find and put uniforms on them. What was also pretty interesting was seeing the rows and rows of ribbons and medals most of them had on their dress blues. I am old enough to remember the days when ninety percent of the crew sported nothing more than a pair of dolphins and a geedunk medal or ribbon (National Defense Medal). Now, it seems like they are all decorated heroes while maintaining a youthful appearance that seems like they could be Sea Cadets. 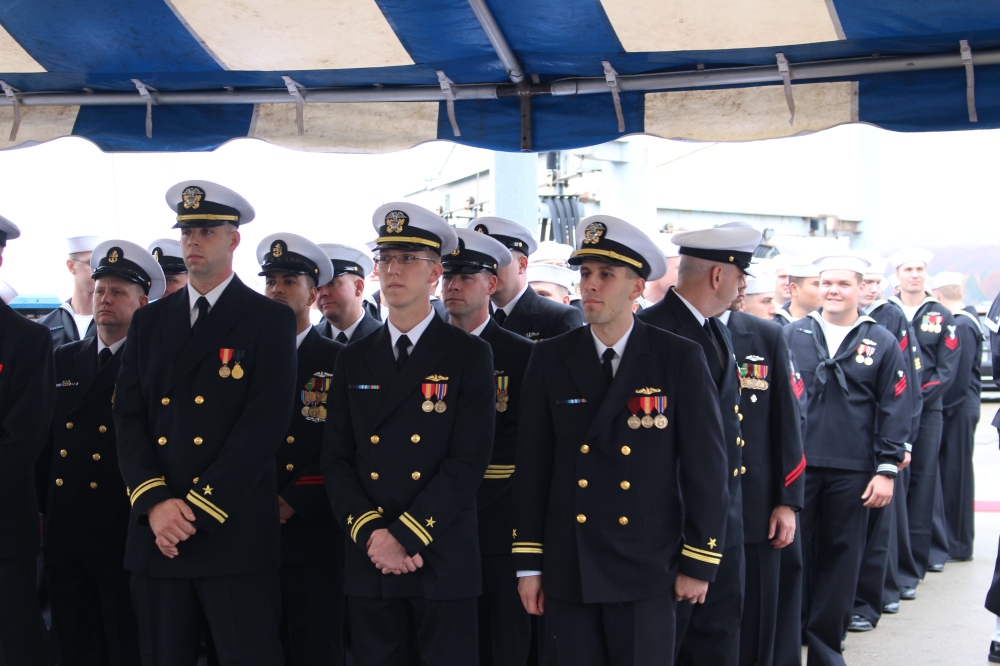 Don’t get me wrong. I know they deserve all the awards they are given. They are probably seeing more sea time then we did since the Navy is continuing to shrink and the missions are continuing to grow.

Yet, I would still do it again if I could.

Because the people I served with are some of the best people I have ever known. I have been retired longer than I was in and I can still say with absolute honesty that the men of the submarines force and Navy people in general were more genuine, more decent, more trustworthy and more dependable than in any civilian job I ever encountered. These are people who would put their life on the line for you. And they did. These are people who would bitch at you one moment and put their fists up to defend you the next against an outsider. These were the people who you trusted to put safety above self in every single case.

Because you shared so many sacrifices together that few other people would understand. When the water closes over the hatches and the boat goes deep, these are the guys who have the knowledge and skill to make sure the boat comes back up. When the boat is lurking in places it shouldn’t be and playing games with other submarines whose mission is to prevent you from doing the mission, these are the guys who will not flinch or waiver. They will use their training to make sure we come out ahead and come home safely.

Because you know that if these will be the last faces you see on this earth, there isn’t a better group of people you would rather be with. As the old saying goes, we all go down together and we all come back together. Or we don’t. I guess since I am writing this, I am one of the lucky ones.

The 688 Boats were so new when I first became a Submariner. Now they are all being phased out or will be in the near future. The new boats will bring even more modern technology and newer adventures. The crews will have training like nothing before. But I suspect they will still be volunteers for the most part. I would live to ride one of the new boats but I am sure it would be as foreign to me as my boats would have been to a sailor that sailed on the old S boats.

Still, I wouldn’t mind one last ride. The line from an old song keeps coming back in my mind

“Don’t it always seem to go, that you don’t know what you’ve got til its gone…”

Yes. I would do it one more time. Would you?