The Birth of the Atomic Fleet 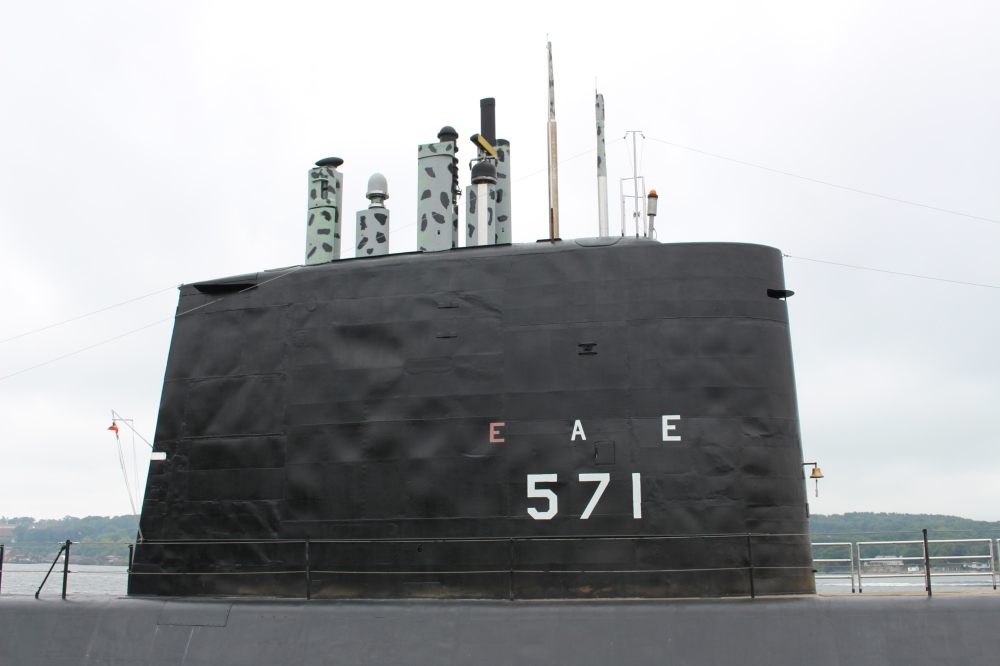 In 1950, the same year the USS Pickerel conducted a remarkable journey from Hong Kong to Hawaii in just 21 days under snorkel, the President of the United States, President Harry S. Truman, authorized the building of an atomic submarine for the first (August 1950).

Pundits and politicians had been predicting that the potential for nuclear power in a submarine was two to ten years away from being realized. What they did not know was that when Captain Rickover steered the engineering work on an atomic engine to Westinghouse in a place called Bettis in 1948, his vision was to make the atomic sub a reality well before anyone expected. Rickover chose Westinghouse because he knew they had the practical engineering capability to do something that was being delayed by the scientists and bureaucrats of the Atomic Energy Commission.

As early as 1946, Naval Leaders like Admiral Nimitz understood that the submarine was the future of naval warfare but needed to extend its time at sea and it’s conceal ability with a new type of propulsion. The harnessing of the atom provided just such an opportunity. The commitment to build and operate the Nautilus was a bold step for Truman and the Navy.

1950 was the fiftieth year of the American Navy Submarine Force

But August of 1950 was a very challenging time for the country and the world. The Cold War was heating up. On June 25, 1950, the North Korean Army (backed by the Soviet Union and Communist China) boldly invaded the south. The Russian navy was operating large numbers of submarines in the area and newspaper articles warned of the danger of a third World War starting. Troops were still largely shipped to the danger spots of the world by ship and the existence of enemy submarines in the approaches to Korea was a real danger.

The United States had rapidly mothballed much of the fleet after the war while disbanding the forces needed to operate them. Trained men were not available and the fleet struggled at first to manage its commitments in a very hostile world.

The promise of an atomic powered vessel with nearly unlimited fuel promised a solution for many of the Navy’s concerns.

Rickover saw this and with sheer determination and will power, shoved the Navy and the World into the Atomic age. He was a practical thinker and not a sentimentalist in any way. His vision was to see a Navy second to none powered by the most advanced technology that man could imagine. He succeeded in a way that still has an impact today.

This post includes material that comes from a book that was published in 1964 by the Atomic Energy Commission called Nuclear Powered Submarines.

This book was written a short ten years after the Nautilus was commissioned and shows the rapid progression of the nuclear submarine fleet. In ten years, the Nautilus was eclipsed by the newer and sleeker boats that were themselves to be eclipsed again within a decade. Those boats would be dwarfed in size and capabilities and later joined by behemoth aircraft carriers that could go decades between fueling. 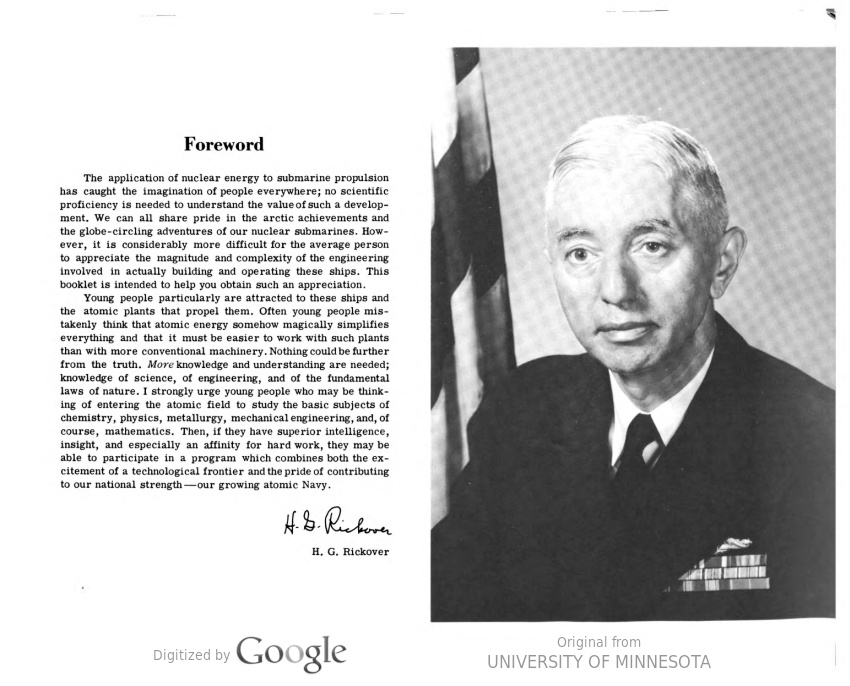 The application of nuclear energy to submarine propulsion has caught the imagination of people everywhere; no scientific proficiency is needed to understand the value of such a development. We can all share pride in the arctic achievements and the globe-circling adventures of our nuclear submarines. How- ever, it is considerably more difficult for the average person to appreciate the magnitude and complexity of the engineering involved in actually building and operating these ships. This booklet is intended to help you obtain such an appreciation.

Young people particularly are attracted to these ships and the atomic plants that propel them. Often young people mistakenly think that atomic energy somehow magically simplifies everything and that it must be easier to work with such plants than with more conventional machinery. Nothing could be further from the truth. More knowledge and understanding are needed; knowledge of science, of engineering, and of the fundamental laws of nature. I strongly urge young people who may be thinking of entering the atomic field to study the basic subjects of chemistry, physics, metallurgy, mechanical engineering, and, of course, mathematics. Then, if they have superior intelligence, insight, and especially an affinity for hard work, they may be able to participate in a program which combines both the excitement of a technological frontier and the pride of contributing to our national strength—our growing atomic Navy.

The advent of the atomic age has revolutionized our undersea Navy. The introduction of nuclear power has converted the submersible surface ship of yesterday to a true submarine capable of almost unlimited endurance.

Events have followed swiftly since the pioneer nuclear submarine Nautilus entered fleet service in 1955. Records established by the Nautilus for submerged endurance and speed were soon eclipsed by submarines of later generations such as Seawolf, Skate, Skipjack, and Triton. Skipjack, first to incorporate the blimp-shaped hull, ideal for under water mobility, broke all existing records to become the world’s fastest submarine. The Navy reports, within security limitations, that today’s submarines travel in excess of 20 knots.

Nuclear submarines also have opened up the waters under the Arctic ice pack for operations. In 1958 the Nautilus made a historic voyage from the Pacific Ocean to the Atlantic via the North Pole. The Skate has three times journeyed to the top of the world, twice surfacing at the geographic North Pole as well as making numerous surfacings in polar lakes.

The marriage of the nuclear submarine and the ballistic missile has been one of the most significant developments in the free world’s defense structure. Since 1960, nuclear submarines capable of submerged firing of the Polaris missile, armed with a nuclear warhead, have been patrolling the seas that constitute 70 per cent of the earth’s surface. Missiles aboard the first two generations of Polaris submarines—the George Washington and Ethan Allen classes—have a range of 1,200 to 1,500 nautical miles. A new Polaris missile capable of hitting its target 2,500 miles away has been developed. These are aboard a third generation of Polaris submarines—the Lafayette and Alexander Hamilton. 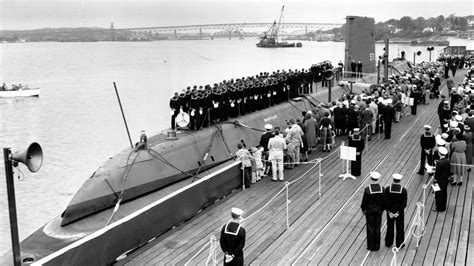 Authorization for the first atomic submarine was signed by President Harry S. Truman in August 1950. This was to be the USS Nautilus. The Chief Executive gave the world an idea of what could be expected from the ship: “The Nautilus will be able to move under the water at a speed of more than 20 knots. A few pounds of uranium will give her ample fuel to travel thousands of miles at top speed. She will be able to stay under water indefinitely. Her atomic engine will permit her to be completely free of the earth’s atmosphere. She will not even require a breathing tube to the surface.” On January 21, 1954, the Nautilus slid into the Thames River, New London, Connecticut.

This article was developed on the eve of the Navy’s 243 Birthday celebration (2018). The efforts of the early pioneers in the AEC, the Navy, the men and women of Western Pennsylvania and the builders can all be proud of the realization of the dream.